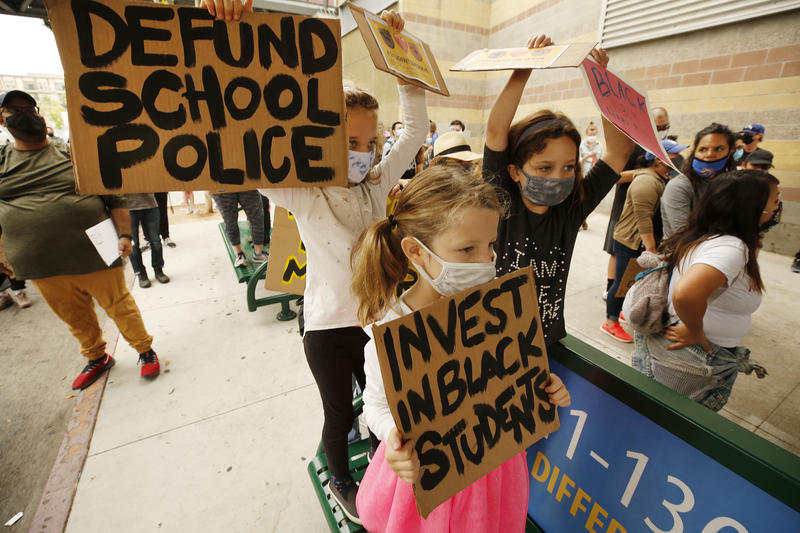 Reductions will lead to the layoffs of 65 officers as well as the elimination of overtime pay and vacant positions.

Los Angeles Unified will cut $25 million from its school police, reducing the department’s budget by more than one-third following several weeks of protests from Black students and activists who have called on the district to reform its police force.

The district’s school board voted 4-3 late Tuesday to make the cuts, which will take effect immediately in L.A. Unified’s 2020-21 budget and result in the layoffs of 65 officers, in addition to eliminating overtime pay and about 40 vacant positions that the department intended to fill. There are currently 410 sworn officers and another 101 non-sworn officers in the force, according to the department.

The $25 million that is cut from the department will be reinvested to hire counselors, social workers and other staff that support students, specifically at schools with the most Black students.

“And hopefully we’ll grow the $25 million that we got tonight. Because there is more work to do,” said board member Mónica García, who wrote the resolution along with board member Jackie Goldberg. “And I have to say out loud, the work of Black Lives Matter, of anti-racist policies, of equity, is before us.”

Over the past several weeks following the police killing of George Floyd, activists across California and throughout the United States have called for the removal of police from schools.

With the vote Tuesday, L.A. Unified joined several other districts across the state that have moved to reduce the presence of police at schools. Oakland Unified voted last week to eliminate its school police department, while school boards in San Francisco Unified, Sacramento City Unified and West Contra Costa Unified have voted to terminate contracts with municipal police agencies.

“If there’s one place police don’t belong, it’s in our schools! Amazing work by students, teachers, parents, and community, who organized for an [sic] WON A 35% CUT ($25m)TO LAUSD POLICE!” Black Lives Matter-Los Angeles wrote in a statement posted to Twitter.

García during Tuesday’s meeting first proposed a $35 million cut to the police department’s budget of roughly $70 million, but later compromised with Goldberg, who said she would support a $25 million reduction. With Goldberg on board, that was enough for four votes, with board members Kelly Gonez and Nick Melvoin also supporting reductions to the school police.

The other three members of the board — George McKenna, Scott Schmerelson and Richard Vladovic — were opposed to any immediate cuts to the school police.

Those three members said they wanted to wait to decide on any possible cuts until the board receives recommendations from a task force being convened by Superintendent Austin Beutner that will review the school police department.

Tuesday’s vote was met with frustration from Beutner, who said he and his staff would need to come back to the board for clarification as to what the vote means for the task force that he assembled. He announced last week that he was forming the task force, which is made up of educators, attorneys and policy experts who were charged with assessing the practices, policies and budget of the school police department.

“This is unusual in my experience to be given the answer before the work was done to look at how the problem might be addressed,” Beutner said.

Goldberg, however, told Beutner during Tuesday’s meeting that the vote shouldn’t “preclude your task force from working.” She said the task force can still make recommendations on whether to keep a school police force at all and, if so, whether the function of the department should change.

Until the board receives recommendations from the task force, the resolution approved Tuesday also prohibits school police officers from patrolling school campuses. Officers also won’t be able to wear their uniforms during that time. The task force is expected to make its final recommendations to the school board sometime during the 2020-21 school year.

Todd Chamberlain, who was the chief of the school police force until resigning Wednesday, said the cuts approved Tuesday would result in the district getting “bare minimum service.”

“It’s not going to deliver the type of community policing or the type of service that our community deserves,” Chamberlain told the board. “And it’s going to be neglectful.”

Chamberlain resigned Wednesday, saying that he thought the budget cuts would be too “detrimental” for him to remain in his position.

“In good conscience, and in fear for safety and well-being of those I serve, I cannot support modifications to my position, the organization and most importantly, the community (students, staff and families) that I believe will be detrimental and potentially life-threatening,” he said in a statement.

Even with the reductions, the department will remain the largest school police force in the state.

Activists and Black students for years have been calling on L.A. Unified to reform its school police department but amplified their calls over the past several weeks. They organized multiple protests in downtown Los Angeles, organized social media campaigns and flooded school board meetings with public comment.

They point to a body of research showing that Black students in particular are disciplined by school police at higher rates than their peers. Many Black students have said they are uneasy being around police on campuses and that it makes it harder to concentrate on learning.

Gonez, one of the school board members who voted in favor of Tuesday’s resolution, said during the board meeting that she doesn’t know “how anyone could hear all those hours of testimony speaking to the harm and to the trauma that’s being caused by the policing institution for some of our most vulnerable students and not be moved.”

“I want to make sure I’m lifting up their voices and validating their experiences and letting what they are saying they need from us drive my work,” Gonez said.

Leave a Reply to Roy Ramirez