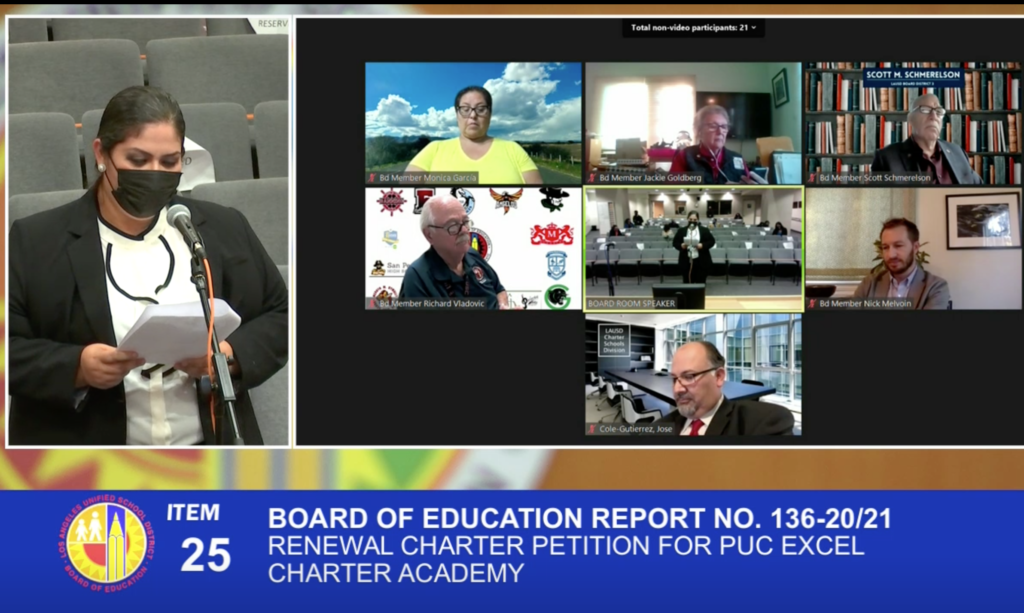 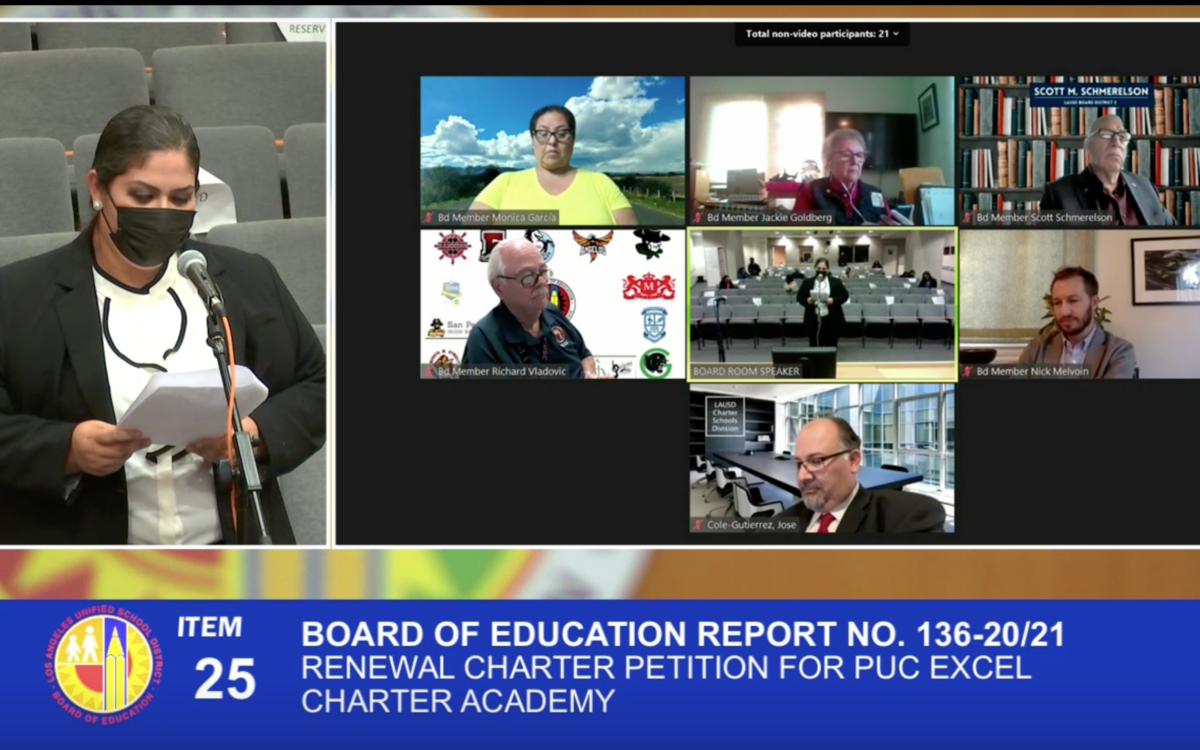 Several charter schools in Los Angeles Unified facing possible closure under a new state law were given reprieves Tuesday by district leaders wary of shutting down schools amid the Covid-19 pandemic.

The district’s school board considered the renewals of 26 charter schools on Tuesday and voted to renew each of them. It was the first batch of renewals that the school board has considered since legislation passed last year, Assembly Bill 1505, changed California’s charter school law. The law, which took effect over the summer, revised several key aspects of the state’s nearly 30-year-old charter school law, including guidelines governing renewals.

The law emerged from months of internal negotiations managed by Gov. Gavin Newsom and State Superintendent of Public Instruction Tony Thurmond and was viewed as a compromise by conflicting sides of the debate over charter schools, including the California Teachers Association and the California Charter Schools Association.

L.A. Unified’s Charter Schools Division staff determined that four schools Tuesday met the criteria to have their renewals denied under the new law, but recommended allowing those schools to continue operating, citing “unprecedented circumstances related to the COVID-19 pandemic.”

The schools were generally criticized for measures such as high suspension rates and below average standardized test scores by their students.

One of those schools was PUC Excel Charter Academy, a middle school in the Lincoln Heights neighborhood of Los Angeles.

“We are grateful for the renewal recommendation along with the consideration of the unique challenges of Covid-19,” Concepción Rivas, the CEO of PUC Schools, said during Tuesday’s meeting. PUC Schools operates 14 charter schools in Los Angeles.

L.A. Unified has more charter schools under its jurisdiction than any other district in the state and its actions may shape how other districts across California implement the new law. The district’s 280 charter schools must seek renewal every five years, and the school board considers renewal applications in batches throughout the year.

Superintendent Austin Beutner said during Tuesday’s meeting that in the midst of a pandemic with “families struggling to get by,” the district shouldn’t seek to close any schools.

“And therefore, on balance I believe the appropriate thing is to conditionally approve,” he added.

In past years, L.A. Unified and other districts have used their own measures to determine whether to approve those requests. But under the new law, districts now rely on specific criteria from the state when making those decisions.

Based on their performance on the California School Dashboard, charter schools are grouped into one of three categories described in the law: high-performing, middle-performing or low-performing. The color-coded dashboard is a visual representation of the state’s system for assessing school performance based on multiple measures including test scores, suspensions and college readiness.

In the past, L.A. Unified has on rare occasions denied renewal to charter schools. Even in those cases, it didn’t always guarantee their closures, since schools have the right to appeal. For example, in October 2016, the school board voted to deny renewals to five charter schools. Later that year, the board of the L.A. County Office of Education voted to overturn the denials of three of those schools.

The schools were granted what the district called “conditional approval.” PUC Excel and Ánimo Ellen Ochoa were extended for just two years because they were deemed low-performing, while Ánimo Legacy and Arts in Action, classified as middle-performing schools, were granted five-year extensions.

Under the conditions of their approval, PUC Excel and Ánimo Ellen Ochoa must no longer be classified as low-performing by the time the state has published California School Dashboard data for the 2021-22 school year, which is expected to happen in December 2022.

Ánimo Legacy and Arts in Action, meanwhile, must each appear in front of the school board in early 2023 and show progress in areas of concern. District staff cited Ánimo Legacy for having high suspension rates and for students scoring too low on standardized tests. Staff also cited Arts in Action for low student test scores and called on the school to increase the percentage of English Learners demonstrating English language proficiency.

“What I think is good about this process is you’ve actually defined in the next two years the expectations in no uncertain terms and what to strive for,” said Richard Vladovic, the president of the school board. “So, I think this is good for the school, and it will serve as an incentive and there’s no way to get out of this now.”

Tuesday’s votes were not without controversy. The board was split in its decision to offer two-year extensions to PUC Excel and Ánimo Ellen Ochoa, the two low-performing schools. Board members Jackie Goldberg and Scott Schmerelson voted not to renew those schools, while board member George McKenna abstained. Vladovic joined board members Kelly Gonez, Nick Melvoin and Mónica García in voting to approve the renewals.

Before casting her vote against PUC Excel, Goldberg noted that the school’s English learners in particular have struggled and were rated below the state average on both math and English indicators. She also said the school’s test scores are generally lower than neighboring schools.

“It seems to me like we’re not necessarily providing any additional support for students here, and they’re not making sufficient progress. I don’t think I can support their renewal even amid Covid,” Goldberg said during the meeting.

Rivas, the CEO of PUC Schools, predicted that the school would be able to improve its academic performance by the time it must come before the school board again.

Rivas suggested the school board would have demonstrated progress in the spring, but the state suspended standardized testing because of the pandemic.

“Unfortunately, the school was unable to test in spring of 2020, limiting its opportunity to demonstrate its projected academic growth. We appreciate the renewal recommendation and pledge our continued commitment to working closely and diligently with PUC Excel to further improve and advance its academic record and performance,” Rivas said.