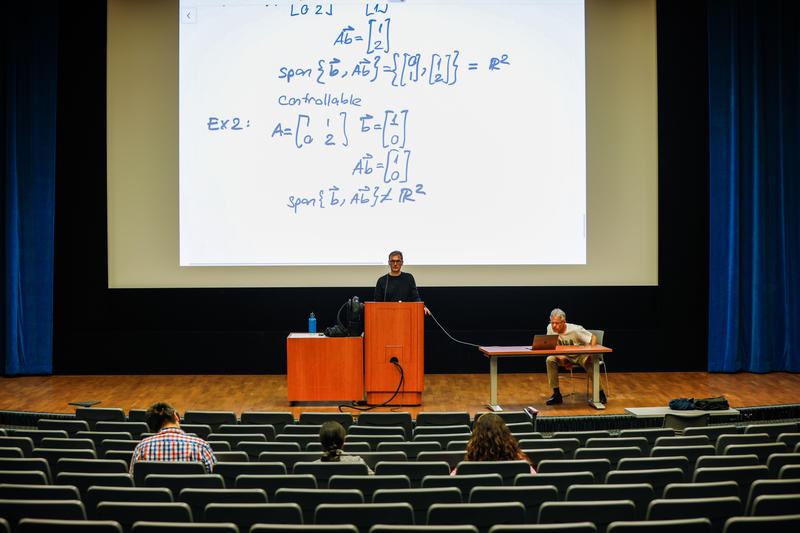 Colleges and universities are cancelling in-person classes across the state.

Photo: Gabrielle Lurie/San Francisco Chronicle/Polaris
Professors Murat Arcak (center) and Seth Sanders teach a linear systems class at Wheeler Hall where normally over 300 students are in attendance, on March 10, 2020. in Berkeley. UC Berkeley announced that is has suspended in-person classes.

Photo: Gabrielle Lurie/San Francisco Chronicle/Polaris
Professors Murat Arcak (center) and Seth Sanders teach a linear systems class at Wheeler Hall where normally over 300 students are in attendance, on March 10, 2020. in Berkeley. UC Berkeley announced that is has suspended in-person classes.

Thousands of professors and instructors across California this week quickly found themselves in the role of student — having to quickly learn how to conduct in-person classes online as colleges and universities begin to close campuses to prevent the spread of coronavirus.

Mia McIver’s writing and literature classes at the University of California, Los Angeles, depend on face-to-face conversations and discussions between herself and students.

In her undergraduate classes, she will sometimes ask students to collaborate in small groups to study terms and word definitions.

But McIver now must adapt quickly to teaching online.

What McIver requires of her students — small group discussions and physical interaction — makes the shift to online challenging, if not impossible, she said. 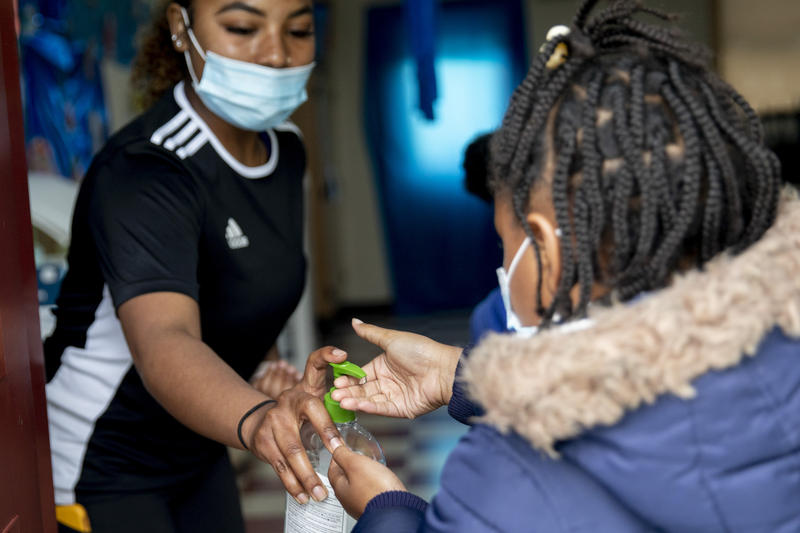 “I know that I will not be the teacher I want to be, and my students won’t get the education I want them to have if these discussions go online rather than face-to-face,” McIver said. “Teaching online and distance education classes require a skill set all of its own … There’s no such thing as a class that can be picked up and plunked online without thought and care. It usually takes months to convert an in-person class to online.”

Instead, McIver and many instructors across the state are getting, at most, a week — sometimes just a few days — to prepare for the transition.

Online classes, from the way they are designed to how they are taught, are different from in-person classes and do take time to create and build, said Van Davis, a policy and planning consultant with the Western Interstate Commission for Higher Education’s Cooperative for Educational Technologies. WICHE is a nonprofit, interstate agency that helps 15 states, including California, collaborate on higher education innovation.

“You can’t just post something and have students respond to it twice and call that participation,” Davis said.

Recording a lecture and posting it online may work in an emergency. Still, instructors need to think through student interaction, assessments and the technology available to all students in a completely different way, he said. Instructors will also need to consider the length of their online classes and their performance like maintain eye contact to keep students interested.

But Davis said one reason colleges have so quickly moved from in-person to online classes is that they’ve been planning contingencies for emergencies such as fires and other natural disasters that would require the same decisions. 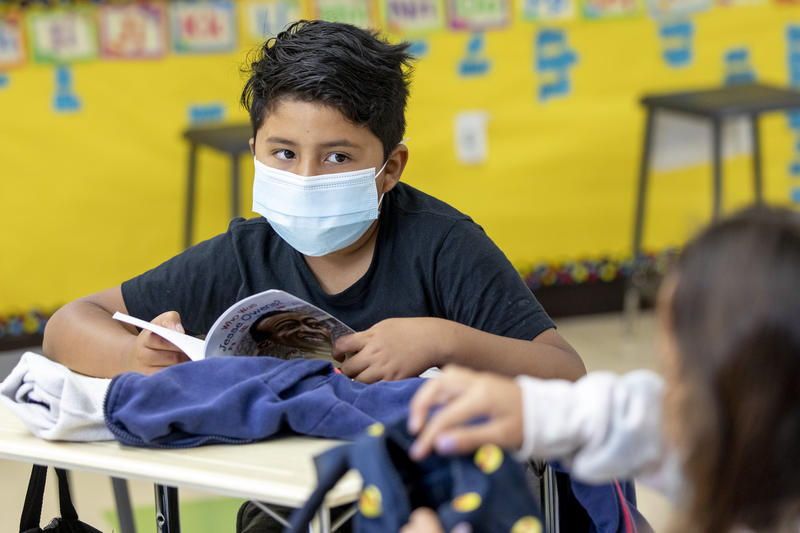 “That’s not to diminish the fact that really well-designed, quality online courses require thinking through,” he said. “But you would be hard-pressed to find an institution where at least one person in the administration didn’t have a conversation about how to use educational technology to keep things going.”

The World Health Organization officially labeled COVID-19, the official name of the virus, a pandemic on Wednesday.

Most of the University of California campuses are suspending in-person courses and moving online. UCLA, for example, canceled in-person classes Wednesday, wherever possible, to transition to online through April 10. In the California State University System, San Diego State, San Francisco State, Sacramento State, CSU-East Bay, Northridge and Long Beach are moving most of their classes online.

Some of the state’s 115 community colleges have made similar decisions, including Berkeley City College, College of Alameda, Laney College in Oakland and Mission College in Santa Clara, with the system’s leadership directing the colleges to switch and get formal permission later.

Colleges and universities, who already offer online programs, are better-prepared than most K-12 school districts that are starting to consider the possibility of moving classes online.

Meanwhile, students had mixed opinions about the decision to shift classes online.

Yelena Sukhanov, a junior and engineering major at UC Berkeley, said the canceled lectures are a “huge interruption” and worried it would be harder for her to learn the materials in time for finals.

“I don’t know if I’m going to be able to get all the help I need,” Sukhanov said. “We’re studying engineering, and a lot of it is getting in-person help with specific problems. It’s probably going to be harder to learn this.”

And although her online lecture, held via Zoom on Tuesday, went smoothly, it was slightly delayed because the professor was trying to figure out the system, she said.

Varsha Sarveshwar, the president of the system-wide UC Student Association, said she was generally pleased with the decisions to suspend in-person classes and move to online education. However, she expressed concerns about how disruptive the move would be to the academic experience.

“It’s always going to be a little harder to learn online rather than in person because it puts more of the burden on students,” said Sarveshwar, a senior political science major at UC Berkeley.

Alejandre Rodriguez, a communications graduate and IT student assistant at Cal State LA, said there are programs in place in the university’s online learning management system where students and professors are able to communicate outside of the classroom. But he’s concerned that the quality of learning could be compromised due to a lack of training.

“It’s like an impacted quality of education that we’re getting because we’re going to be limited to online platforms,” Rodriguez said. “There’s no way all these professors are familiar with how to use the technology to provide just as good of an education as it is when they’re face-to-face.”

The colleges and universities are aware of these concerns, and many of them are offering workshops and training to help instructors transition their classes online. San Diego State, for example, is offering instructors an online webinar that shows them how to use the college’s online learning management system and Zoom.

The San Diego community colleges have somewhat of an advantage, Bulger said. When the colleges moved to the Canvas online learning management system, each of the district’s approximately 6,000 courses had an online section created.

“It’s astounding but it’s easy for us to ramp up that way,” she said, although only about 1,200 of those classes have been actively used for online teaching by instructors and students. The online setting is pre-built, but faculty will still need to add the assignments and exams that make up those online courses, Bulger said.

And that will take training.

“I know that it’s going to be a challenge for a lot of us to figure out how to do this in a relatively short amount of time,” she said.

Blair said she’s also concerned about how some students, who may not have access to high-speed internet, will access these online classes. And part-time faculty members might not have the equipment or computers needed to teach, she said. Most campuses have said they still expect faculty to work.

“I’m fully equipped with everything,” he said. “But … most people on campus … hopefully, they have access to a computer or even a friend to just help them out with that.”

Despite the shift to online classes, none of the California colleges or universities have wholly closed their campuses. Students and faculty may still have access to campus libraries and computer labs. And courses that require science labs, hands-on-training like welding, or performing arts will continue to meet in-person.

Sukhanov, the UC Berkeley junior, said she was confused as to why the university didn’t cancel all of the classes.

“So you can basically tackle someone in a gym class and have skin-to-skin contact, but you can’t go to any lectures?” she said. “That doesn’t make sense to me.”