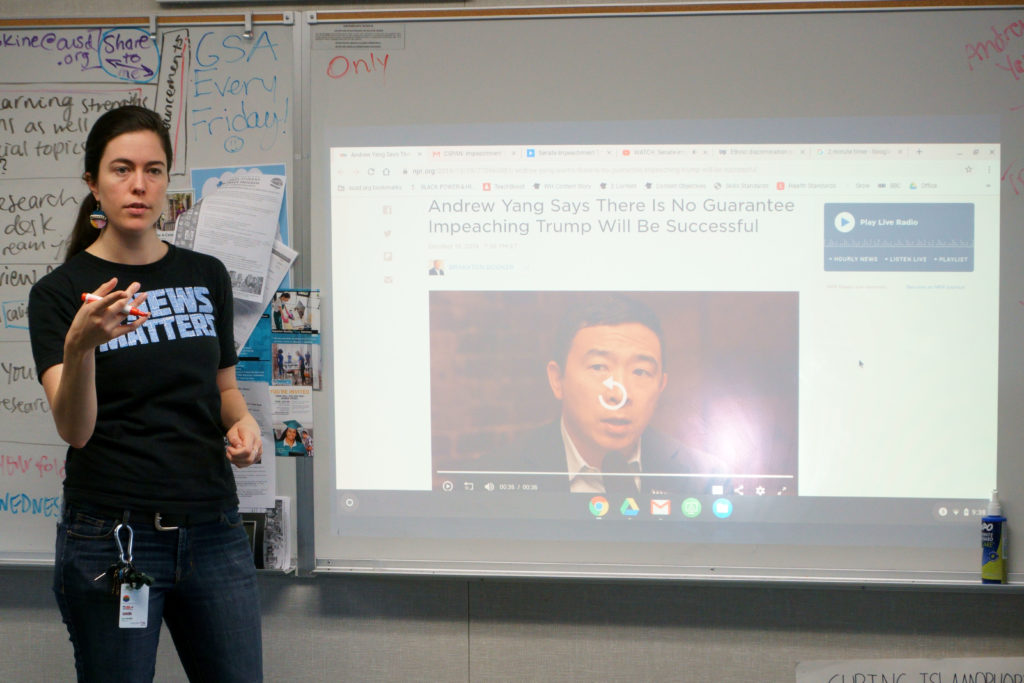 Teachers are weaving the trial into their lessons about the constitution, democracy 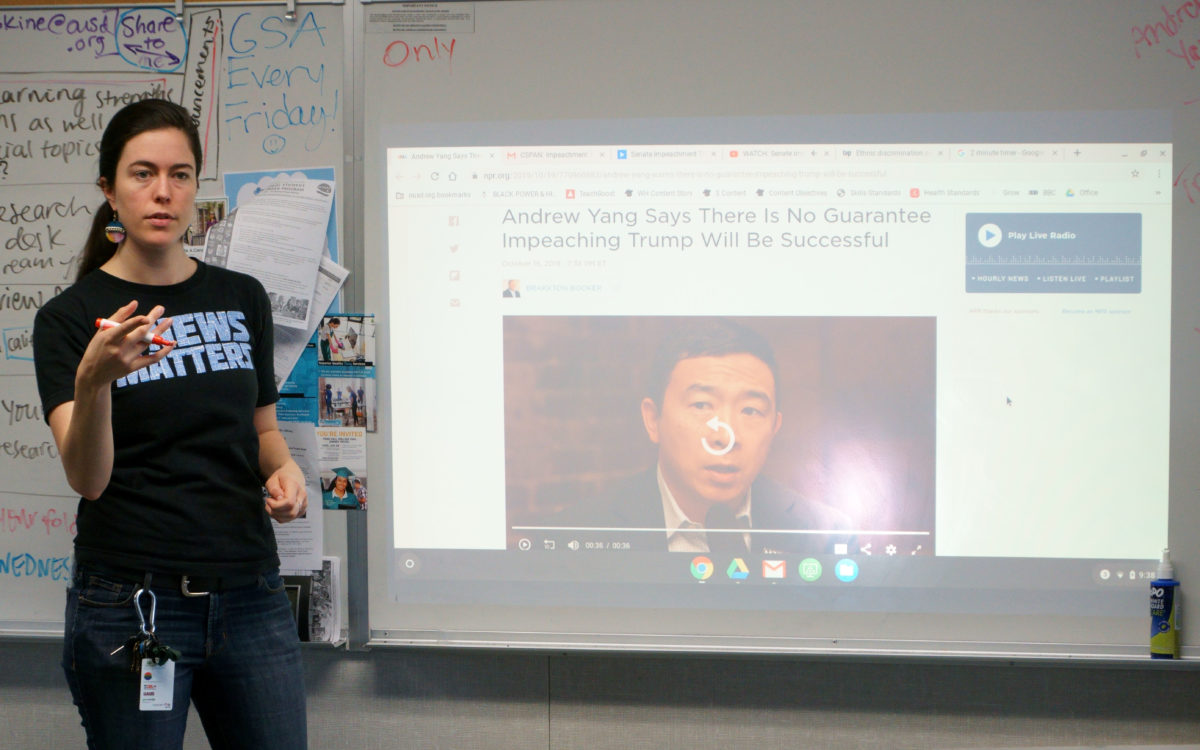 For the first time in more than two decades, teachers have the opportunity to use the political drama of the impeachment trial to liven their lessons and teach history as it unfolds.

The trial has made its way into the lesson plans of both history and government teachers throughout the country. Some use it to prompt classroom discussion and debate, while others are having students compare the ongoing trial to other historical moments highlighted in their textbooks.

“This is being watched and talked about throughout the world, and it has only happened a couple times in U.S. history,” Chloe Erskine, Oakland Unified School District world history teacher told EdSource.

Erskine, who teaches at Dewey Academy, said she considers it her responsibility to talk about the trial in the classroom so students have “the opportunity to express what they are thinking and feeling” about the historic proceedings in which the Senate is conducting a trial on the House impeachment of President Donald J. Trump.

Erskine kicked off her class Monday by having students read and annotate a story on NPR’s web site in which presidential candidate Andrew Yang discussed his thoughts on the impeachment trial. In the article, Yang cautioned people who support the impeachment to be realistic about the chance that President Trump would actually be removed from office given the GOP’s control of the U.S. Senate.

Erskine’s student Christian Castillo, a senior, said he’s glad he can learn about the impeachment trial in class, since he’s heard about it on the news and understands that it’s a major historical event.

“It’s the person who leads us. It’s the president. How can we not be thinking about it while trying to learn history?” Castillo said.

Erskine asked students what they learned from the Yang article, and Castillo responded that the impeachment trial isn’t going to be “as easy as people think it is.”

The students then watched and discussed a C-SPAN clip of U.S. House Intelligence Chairman Adam Schiff’s opening argument in the trial.

Following days of opening arguments, the trial entered a new phase on Wednesday — Day 9 — when senators began submitting questions to Chief Justice John Roberts to ask of  the house managers prosecuting the case and President Trump’s defense team. The question-and-answer portion of the trial continued through Thursday with a vote on whether to call witnesses expected on Friday.

Rachel Reinhard, executive director of the UC Berkeley History-Social Science Project, which works with K-12 teachers, said that the teachers she has talked to are generally using the impeachment trial as a jumping-off point, or a topic of casual discussion, rather than centering their lessons around it.

That’s because teachers are cautious about disrupting their lesson plans in order to move through the content efficiently, she added.

There’s also a lot of preparation required for teachers to incorporate the trial into their lessons, she said.

Some resources are available online for teachers to use for lessons on the impeachment trial. The website iCivics.org, which provides free resources for civics teachers, has an infographic and lesson plan that teachers can use, and the New York Times published an impeachment lesson plan in November.

Because the impeachment trial stirs sharp political divisions, teachers are challenged to remain objective and facilitate respectful classroom debates, said Michelle Herczog, board president of the California Council for the Social Studies.

“Our role as educators is to create an open, safe space where all different points of views are aired and kids can discuss, deliberate and analyze the pros and cons of different positions before they come up with their own opinions,” Herczog said.

Holly Royaltey, who teaches history at San Jose’s Del Mar High School, and chairs the school’s Social Science Department said she had her students, starting in December, contrast the impeachment debate in the United States to the fall of democracy in Germany in the 1920s.

“The unit coincided with the House decision to push for impeachment, and so we thought it would be an interesting time to explore the various dangers faced by democracies in the past,” Royaltey wrote in an email.

The unit was framed around the four pillars of a healthy democracy: freedom of expression, equal rights, leaders chosen by free and fair elections and separation of powers, Royaltey said. The class used the Weimar Republic — the German state from 1913 to 1933 that collapsed under Nazi dictatorship — as a case study, since it offered a look at how each pillar was attacked.

The class watched Stanford Law School Professor Pamela Karlan’s testimony before the House Judiciary Committee, after which the students identified which of the four pillars of democracy came up in the impeachment inquiry.

“[The students] had already come to their own conclusions about the order in which pillars fell in the Weimar Republic, and so they were really interested to see what was at the heart of the U.S. inquiry as a comparison point,” Royaltey said.

Kira Durant, who teaches AP history at Del Mar High, said her class learned about the constitutional process of impeachment and have had some informal discussion about the trial.

She plans to wait for the trial to play out so the class can take a step-back look at the proceeding rather than the “day to day breaking news and drama,” she said in an email. She plans to use the impeachment as a “case study” in the class’s next unit: “interactions among branches of government.”

Reinhard said there has been a “culture shift” in California civics education over the past five years that stresses the importance of contemporary events in civics education.

“It’s realizing that we’re living in historic times, and giving students the opportunity to pause and think about what this means for understanding ourselves as a nation,” Reinhard said.