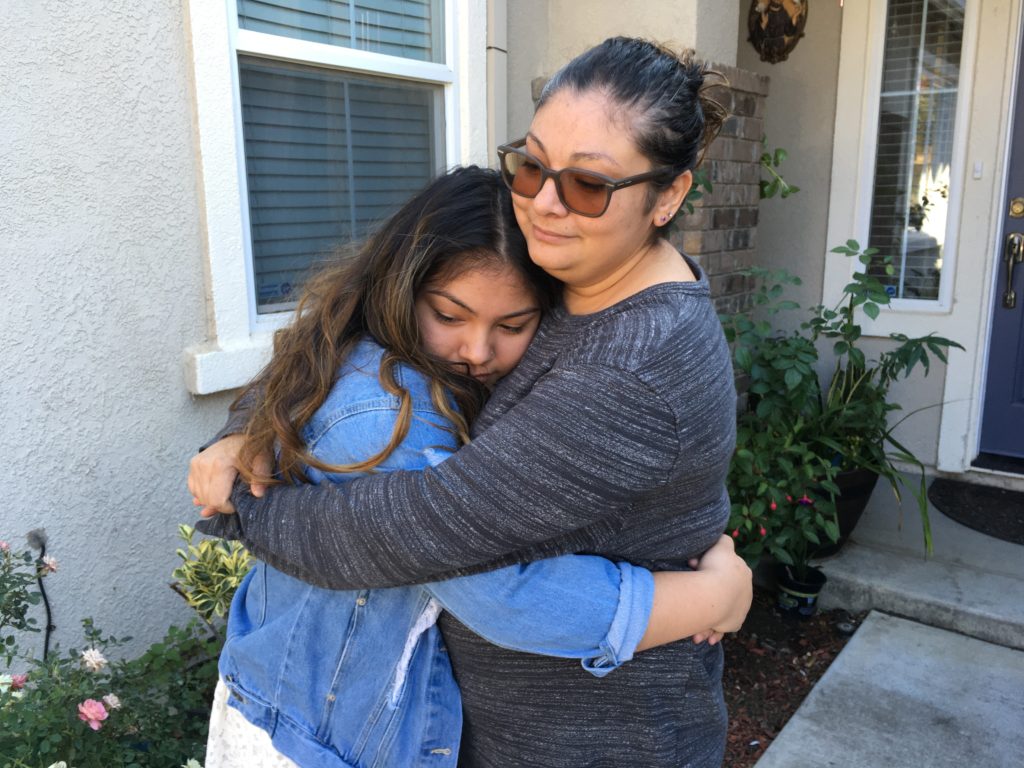 This California teenager awaits a ruling that could decide her mother’s future. 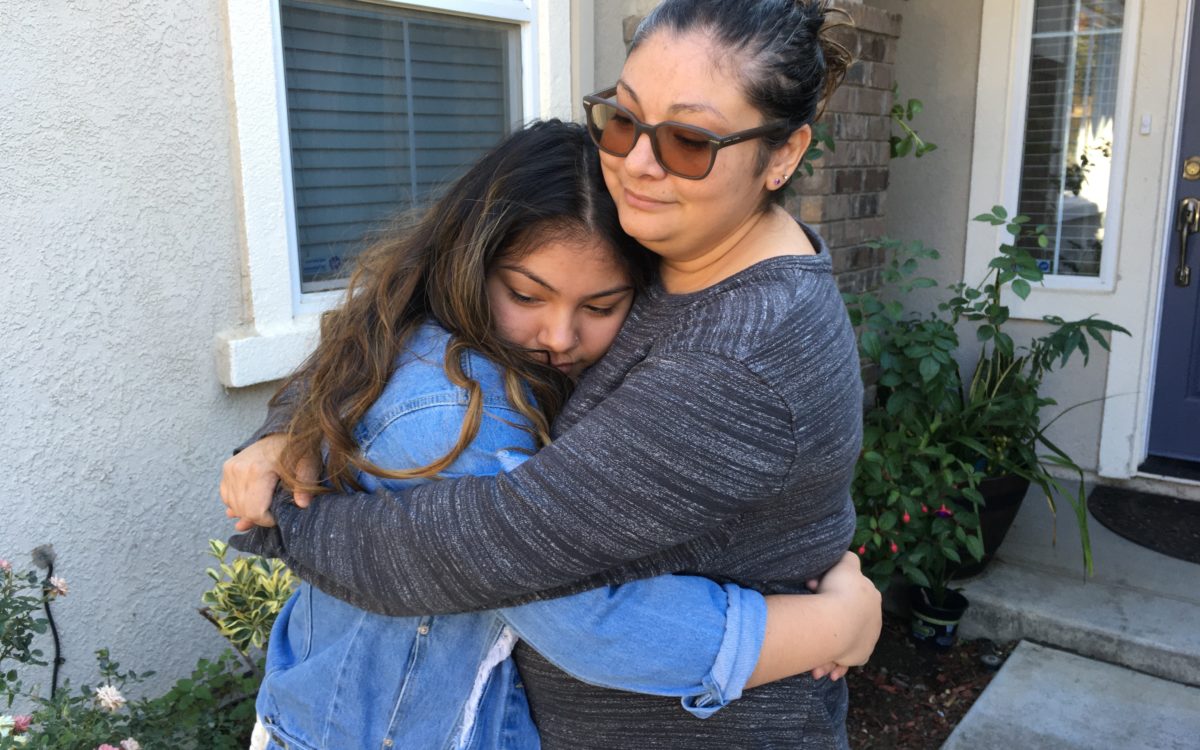 When 15-year-old Guadalupe Garcia thinks about what could happen if the Supreme Court decides to end protections for hundreds of thousands of undocumented immigrants, she feels terrified that her mother could be deported.

“If something were to happen to her, I would feel like the air got knocked out of me,” Guadalupe said. “I don’t know what I would do.”

Guadalupe is one of an estimated 250,000 U.S.-born children nationwide who have parents in the country under Deferred Action for Childhood Arrivals, or DACA, the federal program that provides temporary protection from deportation and permission to work for people who came to the U.S. as children. An estimated 72,600 children of DACA recipients live in California.

In 2017, President Donald Trump announced plans to end DACA, which would subject recipients to possible deportation and revoke their ability to work when their status expires. The University of California and other plaintiffs sued to keep the program in place.

The case is now before the U.S. Supreme Court, where justices will consider whether the Trump administration can legally end DACA. A coalition of children’s advocacy organizations, pediatricians and child development experts submitted a statement to the court, asking the justices to consider the health and wellbeing of recipients’ children, arguing that ending DACA would hurt their mental and physical health.

“If DACA is rescinded, you have a risk of greater economic insecurity, food insecurity, housing insecurity and access to health care and other services that may be impacted because a parent won’t have DACA status,” said Mayra Alvarez, president of The Children’s Partnership, a nonprofit children’s advocacy organization based in Los Angeles that signed on to the statement to the court. “Children thrive when they’re with loving parents, loving caregivers. It’s really important to consider that that critical relationship between a parent and a child is something we’re intentionally destroying by eliminating DACA.”

Guadalupe’s mother, Gabriela Garcia, was brought to the United States from Mexico when she was 3 years old. She was 17 when she had her daughter; now she is 33.

When former President Barack Obama announced the DACA policy in 2012, it felt like a lifesaver. To apply, immigrants had to be between 15 and 30 years old, have been brought to the U.S. when they were younger than 16 and lived here for at least 5 years. They also had to either be in school, have graduated from high school or received a GED certificate or be veterans of the Armed Forces or the Coast Guard, and have no convictions for felonies, significant misdemeanors or multiple misdemeanors. Nationwide, nearly 700,000 people are currently protected under DACA, according to the most recent data from U.S. Citizenship and Immigration Services.

Garcia said DACA has helped her provide for Guadalupe — it allows her to work as an accountant at a computer company, where she has health insurance that has been critical to care for her daughter.

Guadalupe was born with a birth defect that affects her kidneys. She has been hospitalized multiple times and has had three surgeries since she was born.

Garcia doesn’t know how she would have paid all the medical bills without health insurance.

“Just seeing what the bill should have been without the health insurance, it’s crazy. It’s a big responsibility for me to make sure she has health insurance and she’s being taken care of, and we don’t miss anything in terms of her health, because that’s scary,” Garcia said.

The impact of ending DACA would go far beyond Guadalupe’s physical health.

Right now, the two live together in California’s Central Valley with their extended family — Garcia’s sister and her two children, Garcia’s other sister and brother and their parents. During the week, Garcia commutes daily to the San Francisco Bay Area for work. On the weekends, she spends most of her time with Guadalupe. They often walk her 2-year-old cousin to the local park, where he climbs up and down the play structure, calling for “Tita,” his nickname for Guadalupe, to chase him.

The tight-knit feeling, the family support — it all feels like it could change in an instant for Garcia and her daughter. The Supreme Court may not make a final decision on DACA until June. But the possibility of being separated from her mother already feels real to Guadalupe, already makes her anxious.

Afraid she might lose her DACA status after Trump became president, Garcia drew up notarized papers making her younger sister, who is a U.S. citizen, the legal guardian of Guadalupe, in case she is deported.

“The whole atmosphere we’re creating, that somehow it’s OK to threaten to split up a family, is devastating to a kid,” said Ted Lempert, president of Children Now, an advocacy organization based in Oakland that also signed on to the statement submitted to the court. “That uncertainty and fear has a huge impact on a kid’s health and wellbeing.”

That assertion is backed up by research that says that when children live with the fear of a parent’s deportation, they are more likely to experience anxiety and depression and perform poorly in school or drop out.

Guadalupe has plans to attend Cal State Fullerton after high school, then go to medical school in New York. She wants to be a pediatrician. Her mom is proud of her daughter’s dreams. Garcia said she also had good grades in high school, until she realized what it meant that she was undocumented.

“I didn’t think I could go to college, and I kind of like gave up,” Garcia said. “I was a good student, I had good grades, I had a really good GPA. I felt like I hit a wall and I couldn’t go or do anything when I realized I was an [undocumented] immigrant.”

Garcia worries that her own immigration status will derail her daughter’s dreams. She’s already heard her daughter say she’ll protect her mom, apply for immigration papers for her, make sure she’s able to stay. But Garcia doesn’t know if that’s even a possibility. Under current immigration law, most undocumented immigrants are barred from even applying for legal residency, even if they have U.S. citizen children or spouses, unless they leave the country for 10 years. Even then there is no guarantee the application would be approved.

“I wish she didn’t have to worry about this type of thing,” Garcia said. “I wish that this wasn’t a fear that she has. I want her to focus on being a kid, or being a teenager, or making sure she has her life. I don’t want her to feel like she’s responsible for me. She’ll hit a wall like I hit a wall. I don’t want that feeling for her.”

Hugging her daughter close after a Sunday walk to the park, Garcia joked that Guadalupe is almost an adult, that she’ll soon leave home.

“Am I?” Garcia answered, turning serious. “No. Never done.”

They leaned into each other, holding on.