How some California school districts invest in counseling – and achieve results 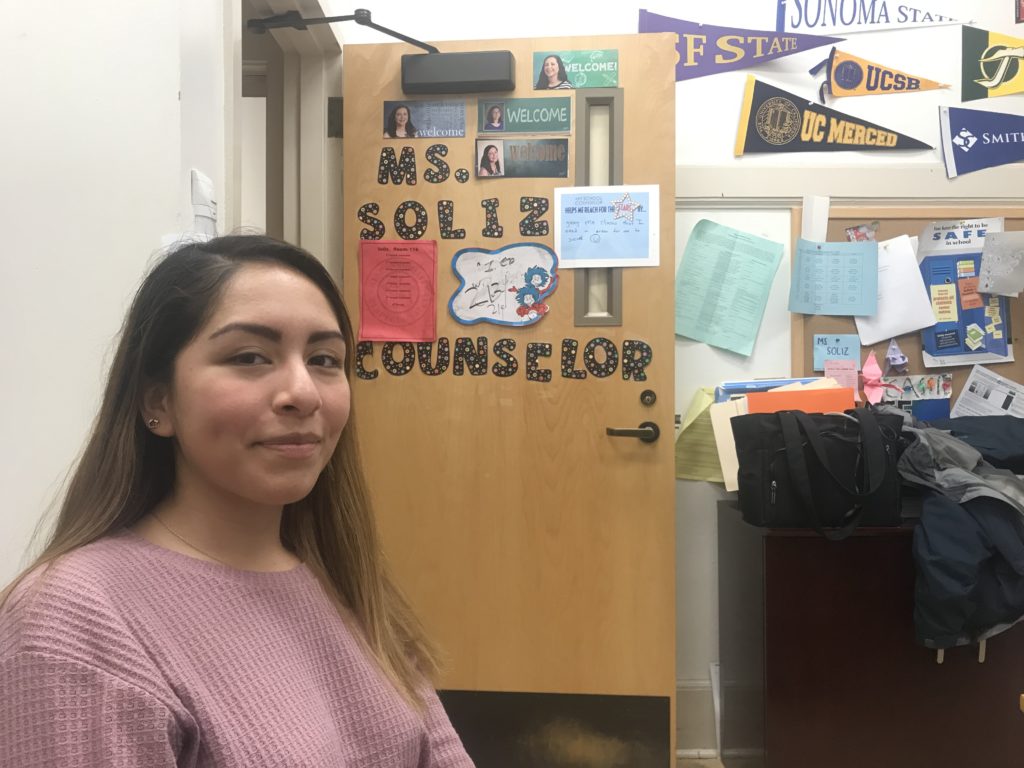 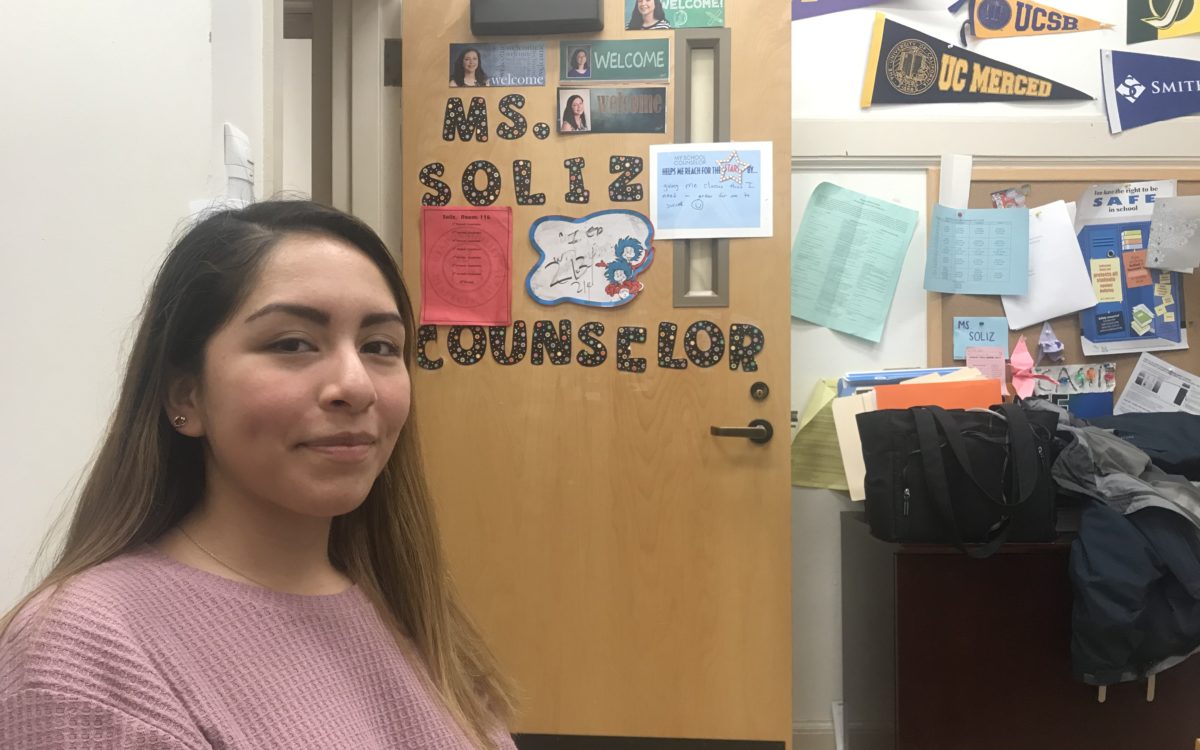 Carolyn Jones/EdSource
Geovanna Veloz, a senior at Mission High, plans to attend a four-year college in the fall.

Carolyn Jones/EdSource
Geovanna Veloz, a senior at Mission High, plans to attend a four-year college in the fall.

Geovanna Veloz, a senior at Mission High School in San Francisco, has always known she wants to be a nurse. What she didn’t know was how to get there.

Her parents couldn’t help much. Immigrants from Mexico, they speak limited English, work long hours and don’t have much experience with education. Neither went to high school at all, in fact.

Enter the school’s academic counseling staff. They ensured that Veloz took the right classes and helped her pick colleges, sign up for the SAT, submit applications and fill out financial aid forms. Veloz is now waiting to hear from three California State University campuses and two University of California schools.

San Francisco Unified is among dozens of districts across California that has invested in counseling in recent years, hiring more staff to guide students through the college and career process and help with their mental health needs. For many districts, the investment has paid off with higher graduation rates, a drop in absenteeism and more students submitting financial aid forms and completing the A-G courses required for admission to UC and CSU.

But while California schools have added more than 2,200 new counselors over the past eight years — a jump of more than 20 percent — student-to-counselor ratios remain high at most districts, and the state average of 609-to-1 is well above the national average and the 250-to-1 ratio recommended by the American School Counselor Association.

“We have to do better,” said Loretta Whitson, executive director of the California Association of School Counselors. “Counseling is crucial if we want more kids to graduate, be prepared for adulthood and ultimately be contributing members of society. It’s about the future of the California economy.”

High school counselors are trained in academic, college and career guidance, and in most schools that’s their primary job. But they provide a host of other services critical to student wellbeing and campus climate, such as handling discipline and behavior issues, working with teachers on social and emotional learning, and advocating for students with independent education plans. Counselors also have mental health training, and often serve as “first responders” who can identify students who are depressed or suffering from trauma and can refer them to specialists.

Numerous recent studies show that a well-staffed school counseling department can help boost students’ academic performance, decrease absenteeism and narrow the achievement gap between white students and their black and Latino peers. Counselors can also have an impact on suicide awareness on campus, and can help reduce behavior problems among younger children, studies have shown.

California districts have hired 2,500 more counselors in the past five years, a jump of more than 30 percent in that time, according to the California Department of Education. But Whitson estimated the state would have to spend an additional $2 billion for California schools to meet the ratio recommended by the American School Counselor Association.

Gov. Gavin Newsom’s budget proposal for next year does not include specific funds for hiring counselors, but it does include grants for anti-bullying initiatives and mental health training for teachers, among other proposals related to students’ mental health.

But good counseling programs are not just about staffing, Whitson said. Districts need to consider the distinct needs of student populations, such as foster youth or English learners, the overall district goals for student success and how to provide an array of mental health and family services that might go beyond the scope of traditional college and career guidance counseling.

Some districts have found ways to maximize their counseling services within the confines of their existing budgets. Stockton Unified and Hemet Unified, for example, have both hired more counselors through their Local Control and Accountability Plans, which districts use to chart their funding priorities and are required to submit under the state’s Local Control Funding Formula. Those two districts included funding for counselors as a way to improve school climate and social and emotional learning.

In 2015, Hemet Unified, in Riverside County, added full-time counselors to each elementary school and new college and career counselors to each of the district’s four high schools. Since then, the graduation rate has increased and the percentage of students finishing the A-G courses required for admission to UC and CSU has jumped from 25 percent to 43 percent.

In San Francisco Unified, the counselor-to-student ratio is slightly higher than it was a few years ago, but it’s still well below the state average and has been supplemented by a big increase in the number of social workers and psychologists. The investments have paid off: The district’s graduation rate last year was 86 percent, a jump from 77 percent a decade ago. And the rate of students going on to college last year was 75 percent, compared to the state average of 66 percent.

School counselors are increasingly important as more students in California grapple with anxiety, depression and trauma, according to the 2020 California Children’s Report Card, released recently by the advocacy organization Children Now. The rise of social media and increasing poverty in California underlie much of the spike in students’ mental health needs, along with trauma associated with violence and parental substance abuse.

“School counselors do triage,” Whitson said. “Without adequate counseling, we can lose kids.”

At Mission High, in San Francisco’s Mission District, counseling services go well beyond the college pennants and inspirational posters in the counseling office. Several nonprofit groups — including 826 Valencia, a writing center founded by author Dave Eggers — have space on campus to provide help with college and career planning, internships and homework. The school also hosts a wellness center, staffed by a nurse and bilingual therapists who provide services ranging from one-on-one counseling to signing up families for health insurance and helping students overcome substance abuse.

Because English learners make up about a third of Mission’s High’s 1,100-student population, counselors run a parent group just for families whose first language isn’t English. There’s also a counselor dedicated solely to newcomer families, who helps them with housing, transportation, food banks and other needs.

Jennifer Soliz, the 9th-grade counselor, has a caseload of 260 students. That number can seem overwhelming at times but is actually half the number of students she had when she started her career at Mission nine years ago.

“We now have a lot of supports to take the weight off,” she said. “I can do more check-ins, make sure they’re navigating school alright and not getting lost. … Beyond what the transcript shows, there’s a whole other story to each student. I feel I have a little more time to get to know students on that level.”

Veloz, the Mission High student who wants to become a nurse, said she could never have deciphered the college application process without help from the Mission High counseling staff. She and her family are grateful for the guidance, especially when it was provided in Spanish, she said.

“Our parents brought us here to have these opportunities,” she said, referring to herself and her sister. “They wanted us to do better than them, get an education and have better jobs. Now we can do that.”

Her mother, Serena Lau, was especially thankful for the help. She noted that private high schools often have large counseling staffs to shepherd students through the college application process, but counseling can be scarce at public schools.

“I thought I was pretty well versed on the college application process, but it’s daunting. Getting into college is not as easy as it used to be,” she said. “We thought we had all the information we needed, but we couldn’t have done it without the counseling staff here.”

“I was ambitious. I had to do it all on my own,” she said. “To be honest, that’s a big reason I went into this field. But there’s a lot of counselors like me. They really want to be champions for kids, and make sure students get every chance to succeed.”