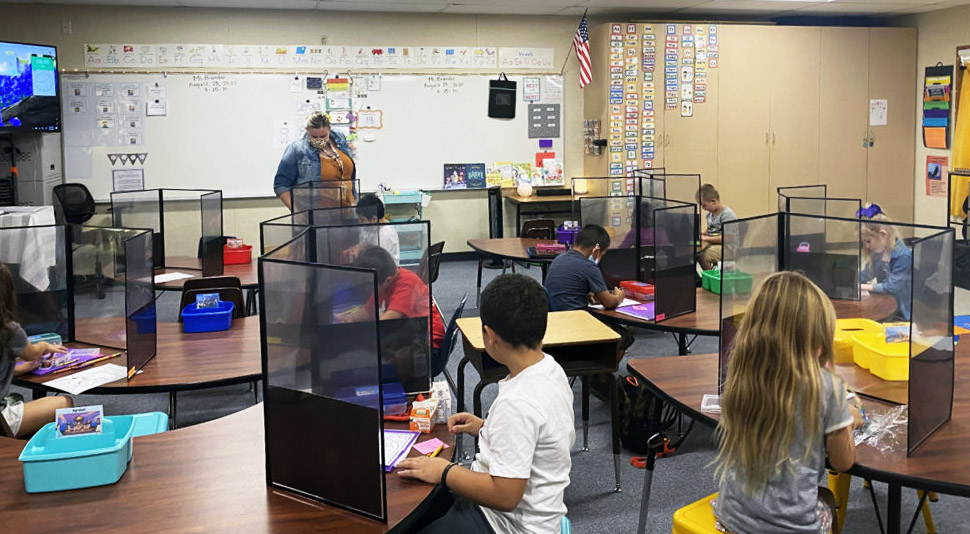 Temperature checks, distancing and strict rules for recess and lunch are all part of the new school day.

Inside classrooms, sneeze guards are set up at each desk and many students wear masks. On the playground at recess, students must stick to their designated play area in groups of up to 12. In the cafeteria, tables that could normally seat 16 students are now limited to four.

At Lucerne Valley Elementary in Southern California’s high desert, hundreds of students have returned to in-person learning and a dramatically different school day. The school was one of the first public schools in the state to receive a waiver to reopen for in-person instruction under regulations issued by Gov. Gavin Newsom in July. The new realities at Lucerne Valley offer a glimpse into what’s called a hybrid learning model and what lies ahead for other schools across the state that await their own chance to reopen.

“The challenge with distance learning in the desert is a big one. The best internet we have out here isn’t good,” said Peter Livingston, superintendent of Lucerne Valley Unified, northeast of San Bernardino. “Having kids in with their teachers is what we needed.”

Lucerne Valley began its school year Aug. 6 with online-only classes, but received approval from the state on Aug. 12 to reopen for some in-person instruction, which began Aug. 20. Waivers to reopen are available only for students in kindergarten through sixth grade, so Lucerne Valley’s middle school and high school with students in grades seven and up are still in distance learning.

The elementary school’s 463 students all had the option of participating in in-person instruction or sticking full-time with distance learning. Almost all — about 400 students — decided to return to the classroom and the school split them into two cohorts. One cohort comes to school Mondays and Tuesdays, while the other attends on Thursdays and Fridays. When students aren’t physically at school, they are participating in distance learning — including on Wednesdays, when everyone is remote and the school undergoes a deep cleaning.

Students who chose not to participate in any face-to-face learning are instead taking classes in the school’s “virtual academy,” which is run by district teachers who are each assigned between 24 and 30 students. Those teachers and students follow the state’s guidance for distance learning, engaging in a mix of live instruction, such as video conferencing, and non-live instruction, which includes pre-recorded lessons and other independent work.

When Lucerne Valley initially applied for the waiver, San Bernardino County had more than 200 cases of the coronavirus per 100,000 residents. The state has said schools should not be considered for waivers if the county where they are located isn’t below that threshold. This week, Newsom implemented a new color-coded county tracking system that will change the way the state determines when schools can open for in-person instruction.

Livingston successfully argued that an exception should be made for Lucerne Valley because, at that time, there were only about 56 cases per 100,000 people in the district’s jurisdiction, he said. Those figures have since dropped to about 27 infections per 100,000, Livingston added.

“Our argument was that we’re a little different out here. Our rates are much lower, and we’ve got the science to back it,” Livingston said. “This isn’t like it is down in (the city of) San Bernardino and those areas.”

As students enter the school grounds every day, a thermal camera takes their temperatures. The camera can capture the temperatures of up to 14 students at a time. The students then wait in an outdoor courtyard, where they can physically distance from each other before it’s time to go to their classrooms. Masks are recommended but optional for students in kindergarten through second grade and required for students in third grade and above.

Inside teacher Carissa Brander’s first-grade class last week, about 10 students sat two to a table, each with their own sneeze partition. The partitions are disinfected every night and are switched out in between cohorts. Supplies like crayons are also swapped out between cohorts.

Students in the class each have their own work packet. When they’re in the classroom, Brander works with them through the packet, which includes activities like handwriting and reviewing letter sounds. During their distance learning days, the students continue to work on the packets from home, supplemented by lessons pre-recorded by their teachers.

Before in-person learning resumed on Aug. 20, Brander and the other teachers at Lucerne Valley were initially required to teach from their empty classrooms for the first two weeks of the school year while their students logged on from home.

“It’s nice to have them back because it’s weird to sit in here by myself on the computer,” Brander said. “It was an adjustment making all of our lesson plans virtual, but it challenges us to be creative in the way we present stuff.”

“With our hotspots, they get better internet. But it’s definitely not like in the city,” he said. “And so especially with the little ones, like the first- and second-graders, there’s more accountability now because they get to come back to their teacher twice a week.”

Misty Davis, who has two daughters at the school, agreed and said a return to in-person learning was necessary for her youngest daughter, Sophie.

Sophie is in second grade and benefits from one-on-one communication with her teacher, but she hasn’t been able to have those types of interactions during distance learning, Davis said.

“There are 20 other kids on the Zoom and everything’s kind of chaotic,” Davis said. “So this is a lot better.”

Not every teacher in the school, however, has abandoned daily, live video conferencing. Mckenzie Tardibuono, a fifth-grade teacher, still teaches every day over Zoom. When students are physically at school, they log into Zoom from inside the classroom and participate in the same lesson as their classmates who are at home.

Tardibuono said she decided to set up the class that way because more than half of the students in her class — 14 out of 25 — chose to do distance learning full-time. Rather than sending them to the school’s virtual academy, where they would have a different teacher, she decided to construct her class in a way that allows them to all participate.

Currently, students in the class are reading Louis Sachar’s 1998 novel “Holes.” Those doing distance learning full-time follow along from home.

“The kids who are staying virtual, it was more so the parents not feeling comfortable enough to send them to school, and I didn’t want those kids to feel left out because of that. So I tried to make an inclusive environment,” Tardibuono said.

Tardibuono said her students who are in the classroom have needed no reminders to wear their masks throughout the day. She also has a system to make sure her students are properly washing their hands. Before they go to recess, each student gets a stamp on their hand. If the stamp isn’t gone when they return, they have to go back and wash their hands at one of the school’s new outdoor hand-washing stations.

While students are at recess, they must stay with the other children in their class. The school has designated certain equipment and playground areas for each grade, and no mixing between classes is allowed.

During one recent recess, teacher Tatyana Maurice had to remind her second-grade students to stick to those rules.

“Stay on your side. Don’t go over there,” she told them as some students started to veer away from their designated area.

Maurice said she also often reminds her students to “spread their butterfly wings” — their arms — to make sure they have enough distance between one another.

In between recess periods, custodians disinfect the playground equipment with spray. Some equipment and toys that would be more difficult to disinfect — such as giant Lego blocks — have been stored away for the time being.

Before going to lunch, students line up at one of the district’s outdoor hand-washing stations and take turns washing their hands. Then they walk single file into the cafeteria and aides remind them to keep a distance between one another.

After picking up grab-and-go lunches, an aide directs the students to specific seats in the cafeteria. The cafeteria is only filled to 25% of its normal capacity. Once 25% capacity is reached, the rest of the students eat outside, where there are benches and pop-up structures to provide shade.

In case a student were to display symptoms consistent with the coronavirus, the school has also set up an isolation room with cots where students can stay until a parent can pick them up.

If a student tests positive for Covid-19, the school will consult with officials in the county’s public health department. At the very least, that student’s class would be shut down and sent home to do distance learning exclusively for two weeks, principal Ricky Anderson said.

“We’ve tried to encourage the parents at home to do some self-assessments before they even get to school and are encouraging them if they’re sick, stay home,” Anderson said. “But that’s the kind of the beauty of distance learning in the hybrid system is that even if they’re home, it’s not considered an absence.”

Throughout the school day, custodians are constantly disinfecting commonly used spaces like the bathrooms and lunch tables. On Wednesdays, when no students are on campus, they do a deeper clean and disinfect all the classrooms. Teachers also have their own disinfectants to clean their classrooms during the day.

School officials also made several upgrades throughout the campus to mitigate the risk of the virus. They installed several new outdoor hand-washing stations, bought portable air filters and upgraded their air conditioning filters to purify the air as it circulates. To pay for those changes, the district had to dip into its reserves.

“If we do get more federal money, that’s great, and we can backfill those costs,” said Livingston, the superintendent. “But we’re not depending on that.”

Anderson, the principal, said the school might make additional changes to the school day if it becomes safe to do so. Once a week during a typical school year, students would take specialized classes like art, yoga and robotics, and students from different grades would mix with each other for those courses. The school also typically has small-group interventions where students get intensive learning in math or reading, but has had to put a stop to those.

“As we get more guidance, we might bring some of those things back,” Anderson said. “This is a slow process.”