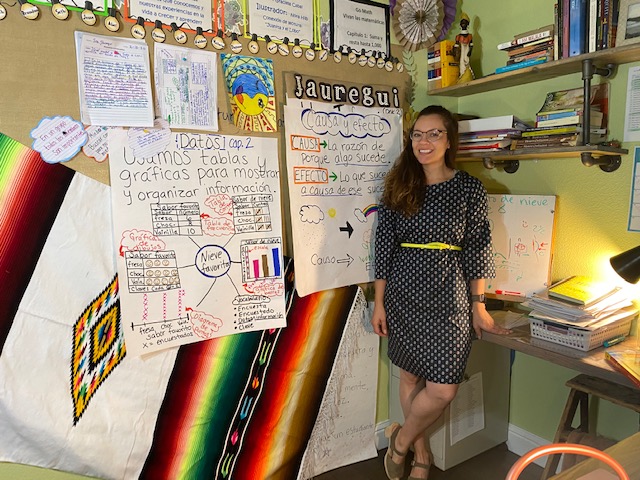 Stuck behind a screen for distance learning, California teachers in dual-language classrooms are trying to come up with new ways to immerse their students in two languages.

Hundreds of schools in California have dual-language immersion programs, which teach children both in English and another language, such as Spanish, Korean, Mandarin or Vietnamese. The programs help students fluent in English learn another language, while helping other students retain their native language while learning English. The classes are designed so both groups can become bilingual.

With most instruction now remote and with less class time, students don’t spend as much time exposed to their new language. In addition, students are no longer learning from playing and talking with each other in the classroom and on the playground. An important part of dual-immersion is that both groups model their own languages for each other.

“Normally, in our schools we would have students constantly turning to each other and chatting with each other, and they would be practicing specific language that they’re learning and talking about the text that they’re reading and writing,” said Thea Fabian, vice principal of Fresno Unified’s Wawona K-8 School, which teaches elementary-age children in Spanish and English. “What makes it especially difficult in this context is you can’t do that very effectively. You can do that sort of, but it’s not the same.”

California is actively trying to expand the number of dual-immersion programs as part of a state initiative to get half of all K-12 students participating in programs by 2030 that teach them two or more languages. Some proponents of bilingual education are concerned that schools that are just beginning to develop their programs will decide to put those plans on hold amid the coronavirus pandemic.

“We’ve seen through research that those students who are in those programs do so much better in all areas, both in the target language and in English,” Gustafson-Corea said. “It might feel more challenging, it might take a tad bit longer, but if you’re in that process and move forward with that, even during the pandemic and distance learning you can still do it.”

Many teachers are using programs like Flipgrid or Seesaw to have students record and share videos of themselves reading or talking in another language. Breakout rooms in live platforms like Zoom or Microsoft Teams help get children talking in small groups, especially when teachers select children from different language backgrounds in each group, so they can model fluent language to each other.

Some teachers have sent home materials like plastic tokens to do hands-on math, seeds to grow plants, or watercolors to do art, which help the children learn the language by following directions. To get young children talking, some teachers designate a student of the week, who shares something they like with the rest of the class. The other children ask questions and then write down sentences about what that child likes.

Teachers are also sharing video or audio of themselves or others reading books aloud or singing songs or chants, so that even when children are not participating in live instruction, they can listen to the language and learn complex vocabulary, which is important both for students who are learning the language for the first time and for those who speak the language at home.

“If we’re studying plants and animals, or habitats, and we’re going to study the rain forest, we do chants related to that unit of study. We use advanced vocabulary, even in 1st grade,” said Linda Montes, assistant superintendent of educational equity for Redwood City School District, south of San Francisco. “Students can more easily access that language if they’re singing about it and chanting about it.”

In one video shared by the district, Vanessa Sanchez, a 2nd-grade teacher at Adelante Selby Spanish Immersion School, sings a song in Spanish about the importance of making your voice heard when you see injustice. Another 2nd-grade teacher, Albert López, wrote the song, and the entire 2nd-grade team used it as part of their unit on government and leaders.

Teachers from all over the district collaborated to come up with lessons and chants.

“They can’t do everything, but we can share the load,” Montes said.“That’s a big lesson that we learned last spring, that one teacher can’t do it all.”

In another Redwood City school, Orion Mandarin Immersion, Montes said 2nd-graders built three-dimensional maps of their own neighborhoods and recorded themselves talking about their projects in Mandarin, using vocabulary they had learned in class.

Rosario Arellano, who teaches math and science in a Spanish-English immersion program at Stephen M. White Middle School, in Los Angeles Unified, said she’s had to work hard to get students to participate in class, because they are more cautious about using Spanish in her online classroom than they were in person.

“It’s been tough,” Arellano said. “They’re already having trouble with being in middle school, being more self-conscious, and now being online, and then having to do it in Spanish, it adds more weight on their back.”

Arellano starts class with breathing exercises, checks in about how they’re feeling, and asks them to answer a question like, “What is your favorite board game?”

“Usually because they are already participating with a fun question, that kind of gets them in the mood to participate a little bit more,” Arellano said.

Several principals and teachers said sharing resources in both languages with parents, so they can help their children at home, and reassuring parents of the benefits of dual-immersion education is crucial during distance learning.

For some parents, especially those with younger children, it’s been hard to watch their children struggle at home with a new language they don’t understand.

Linda Caro’s son had tantrums every day when he started kindergarten at a Spanish-English dual immersion charter school in San Bernardino this fall. The family speaks English at home and Caro’s son doesn’t yet understand Spanish.

“He couldn’t really focus on the computer. That’s hard in itself,” Caro said. “On top of it, he doesn’t know what they’re saying. That was really rough. We kept just falling farther and farther behind.”

After three weeks, Caro moved him to an English-only program, where she says he is doing much better. However, she plans to re-enroll her son in the dual-immersion school next year if instruction is once again in person. Her daughter is in 3rd grade at the school and has adjusted well to distance learning in both languages. Caro wants both children to learn to speak, read and write Spanish fluently, because their grandmother speaks only Spanish.

“I don’t want to lose our native language,” Caro said.

Out of 459 students in kindergarten and 1st grade at Ford Boulevard Elementary, in Los Angeles Unified, about 12 moved out of the Spanish immersion program to the English-only program this year, according to principal Ana Vega. That is a little more than during a typical year. Vega and other principals said it is natural for children to struggle during their first few weeks or months in a dual-immersion program, but they eventually learn the language. The main difference this year, they said, is that parents are witnessing that struggle because their children are learning from home.

“I tell them, ‘What you’re seeing is natural. You just don’t see it when we’re not in the virtual classroom,’” Vega said.

Shelly Spencer’s youngest daughter also started kindergarten this year at a Spanish-English immersion school in Fresno, Ann Leavenworth Elementary. Spencer’s oldest daughter, now in high school, also attended the school, and her middle daughter is now in 5th grade there. She said the program is harder online, but her kindergartner is paying attention in class in Spanish, and she raises her hand to answer questions. Spencer has also seen her begin to sound words out in Spanish.

“Because I’ve been in the program before, I could trust the process. A lot of parents when they start, they think, ‘I don’t think they’re going to get it.’ They always say, ‘Just wait, just give them some time. It’s all going to click for them eventually,’” Spencer said. “I can already see some things for her clicking.”

The principal of Ann Leavenworth Elementary, Erica Piedra, said she has already seen improvement in Spanish language assessments between last year and this year.