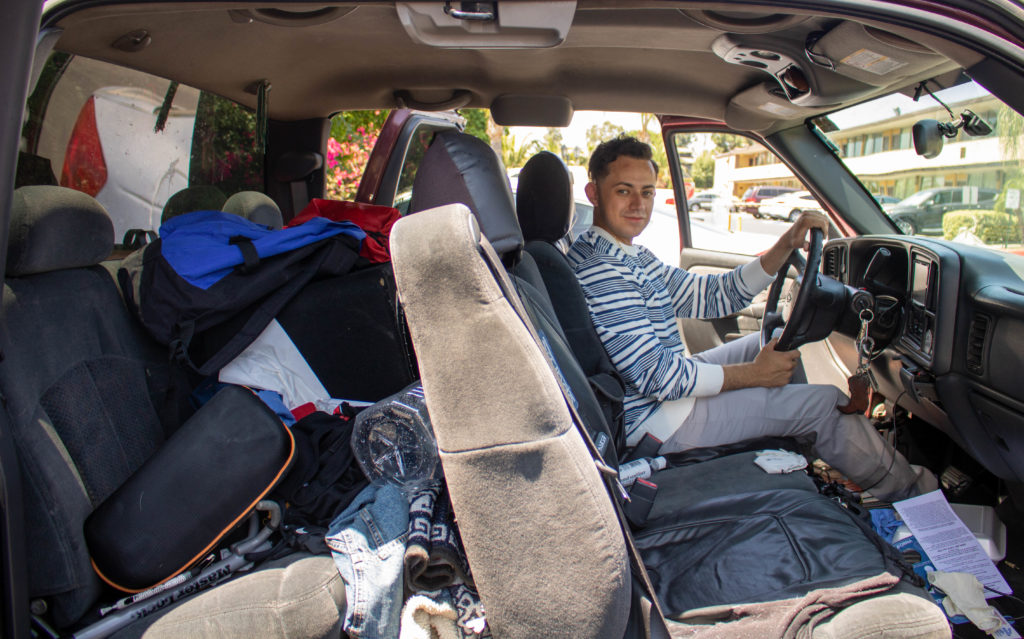 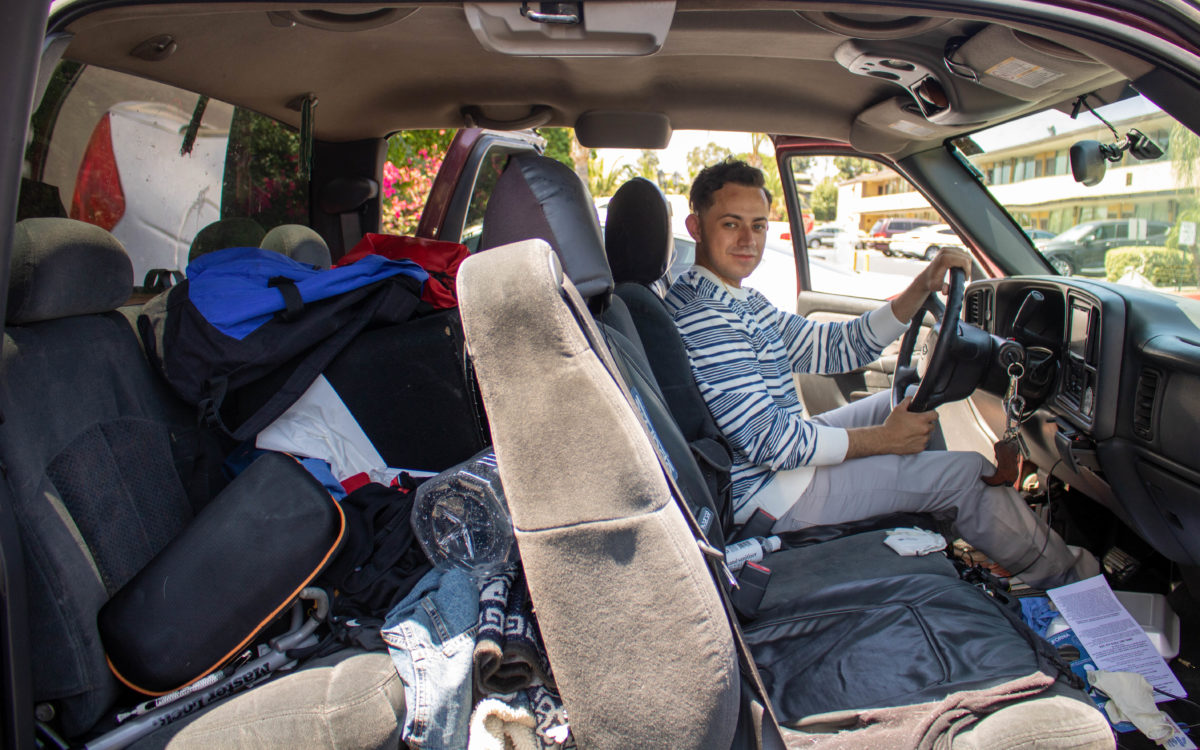 As universities transitioned to online-learning to slow the spread of Covid-19, thousands of California college students flocked to their dorms, apartments or parents’ homes to continue their studies from the comfort of their bedrooms, wherever those were located.

Homeless students had nowhere to go.

The pandemic piled onto an already overwhelming stack of problems that still remained as students returned for a new semester of distance learning. When campuses closed in mid-March, college students who rely on their campuses for food, Wi-Fi and, in some cases, shelter, realized these necessities were becoming even harder to come by.

Emergency resource centers on their campuses and cities became beacons of hope for some to find refuge during the ongoing pandemic.

There are many reasons why students could find themselves being homeless during the pandemic, experts say. The results have led to an increase in students reaching out for assistance, says Henoc Preciado, who oversees the California State University’s Basic Needs Initiative.

“I think with the pandemic, the needs for students have only been exacerbated a little bit more with the loss of income, loss of home, loss of stable food,” Preciado said. “The increase is certainly a result of what not only our students are facing, but of what all of humanity is facing.”

In the midst of stay-at-home orders, Joshua Passamore, an applied economics major at the University of the Pacific in Stockton, was forced to leave his apartment after a rent increase meant that his food delivery job could no cover the rent on the apartment he shared with roommates.

“You’re kind of just stuck in a perpetual hole,” the 21-year-old said. “It just keeps getting worse and worse. Money grows tighter. Then, increasing credit card debt to survive and having to make a lot of tough decisions at the margin based on survivability.”

Crystal Peralta, a 32-year-old music major at California State University, Long Beach, says switching from in-person classes to online learning meant reluctantly moving into her grandmother’s home — in order to stay in California to finish college and keep her job at a local pre-school — and being belittled on a daily basis by her grandmother with whom Peralta had a difficult relationship. Spending more time there started to take a toll on her mental health, Peralta said, which prompted her to make a change even if it made her housing situation more uncertain.

“I avoided her as much as I could because everything I did was just another reason for her to say something,” Peralta said of her grandmother. “I would cry the first two weeks of quarantine. Oh my god, I was depressed.”

Chaffey College student David Leon, 24, moved from his 2003 Chevy Silverado into a motel room at the Ontario Airport Inn in March just before the pandemic impacted his school. For now, he remains safe inside his motel room, thanks to emergency aid from his community college and a local community center called the One Stop Transitional Age Youth Center.

However, Leon will have to move out by Oct. 20, his 25th birthday, when the business administration major ages out of the One Stop Tay Center’s emergency housing program. If he can’t afford to rent a private room in a home or apartment, as stipulated by the program, it’s back to the truck for Leon.

“There are not a lot of resources in the community, and our students would really have to dig to find them,” Rodriguez said. “My approach to the work is that this is not only Chaffey College’s work, but this is a community effort. So I tried to make as many connections to community resources, so that I can always have a soft hand-off for students. I just don’t want to say, ‘Well, here’s a website and go check it out.’”

His school’s connection to the community housing program made it possible for Leon to live in a motel in nearby Ontario. The motel stay made working on his summer statistics and political science classes easier for Leon. Prior to the pandemic, he studied regularly in his truck when he wasn’t at the Chaffey College Library. The front cab functioned as a work space and a bedroom.

While sleeping in the clutter-free truck, Leon said the front seats of the cab would only allow him to rest in one position. He had to adjust seat belt buckles that would otherwise “stab into my side.”

Safety was a regular concern of Leon’s while living in his truck. He worried a passerby might break into the lidded bed of his truck where he kept the bulk of his belongings. He cited a time when a man flashed a knife at him, but he managed to drive away unharmed.

“Even when I was asleep, I would have to sleep with one eye open, watching my surroundings, making sure no one’s trying to break in while I’m asleep,” Leon said.

A room at the motel allows him to sleep peacefully at night. “The best thing for me is just having peace of mind,” he said.

Meanwhile, at Long Beach State, when Crystal Peralta’s mother and the rest of her family decided to move to Florida, she chose to stay behind to earn her diploma with no choice but to move in with her grandmother with whom every day seemed to bring another verbal altercation.

When she wasn’t at work, Peralta said she did her college homework at Starbucks or spent time with her former fiancé to avoid going home. She and her grandmother would argue about her time away with her fiancé, who is now her husband.

“She just made me feel like I was a street worker, like I was just out dancing on tables,” Peralta said.

Eventually, after constantly hearing her grandmother talk about her on the phone with other family members, Peralta finally had it. She told her grandmother she no longer cared to hear her opinion. Her grandmother responded by telling Peralta to leave.

To stay informed about resources available to students, Peralta constantly scrolled through Instagram for accounts associated with Cal State Long Beach, posted by students and the administration. Peralta said she was “blessed” to one day find a post about Cal State Long Beach’s Basic Needs Program.

The program is offered throughout the CSU system and provides services to housing and food insecure students, such as financial aid and where available, as is the case at Long Beach, access to a campus food pantry. Before moving out of her grandmother’s house, Peralta reached out to the program. That was in part because she was tired of sometimes spending nights sleeping in her car in the parking lot of the preschool where she works as a health monitor checking their temperatures and giving them the green light to come into the school.

At CSU, Long Beach Student Emergency Intervention and Wellness Program applications for housing, emergency grants and meals assistance increased from 230 last year to about 1,300, according to Kenneth Kelly, director of the Basic Needs Program at CSULB.

Like Peralta, getting support and shelter from her his family was also off the table for Joshua Passamore at the University of the Pacific.

Born in Guatemala, Passamore was later adopted as a child by his parents, who reside in Oregon, but always felt like a burden. Last fall, he says, his parents cut financial and emotional support, leaving Passamore to fend for himself.

When the pandemic sent students home to learn remotely, Passamore’s sister was allowed by the family to return home in Oregon. But the invitation was not extended to Passamore.

When students realize that moving back home with family or friends is not an option, campus resources become lifeboats. Learning to tap into those resources by any means available becomes a crucial life skill for such students.

Passamore also lived and worked out of his vehicle, a 2017 black Toyota Corolla. He removed the back seats to make room for a makeshift bed — a piece of plywood topped with a foam mattress. But, the climate in Victorville is harsh with temperatures as high as 100 degrees this summer.

“When living in your car, there’s never a break from your reality,” Passamore said. “It’s hot and you’ve got to have AC in your car. You work all day just to be able to survive and you never get a break and it just becomes overwhelming.”

He spent the entire summer bouncing from city to city living and working out of his 2017 black Toyota Corolla, searching for job opportunities while delivering food to afford gas and feed himself. His journey started in San Francisco and Oakland, then down to Fontana and eventually Victorville, where he recently found temporary shelter with friends.

Because of his housing insecurity, Passamore withdrew from his summer and fall classes at the University of the Pacific, delaying his graduation date, which would have been spring 2021. Passamore is currently considering transferring to a school located in a city that he hopes yields more opportunity. One of his considerations is California State University, Northridge.

“I think it might be a better fit for me, Passamore said. “And I’ll have more opportunity and actually be able to do the one thing I’ve always wanted to do my whole life — just be able to be a student.”