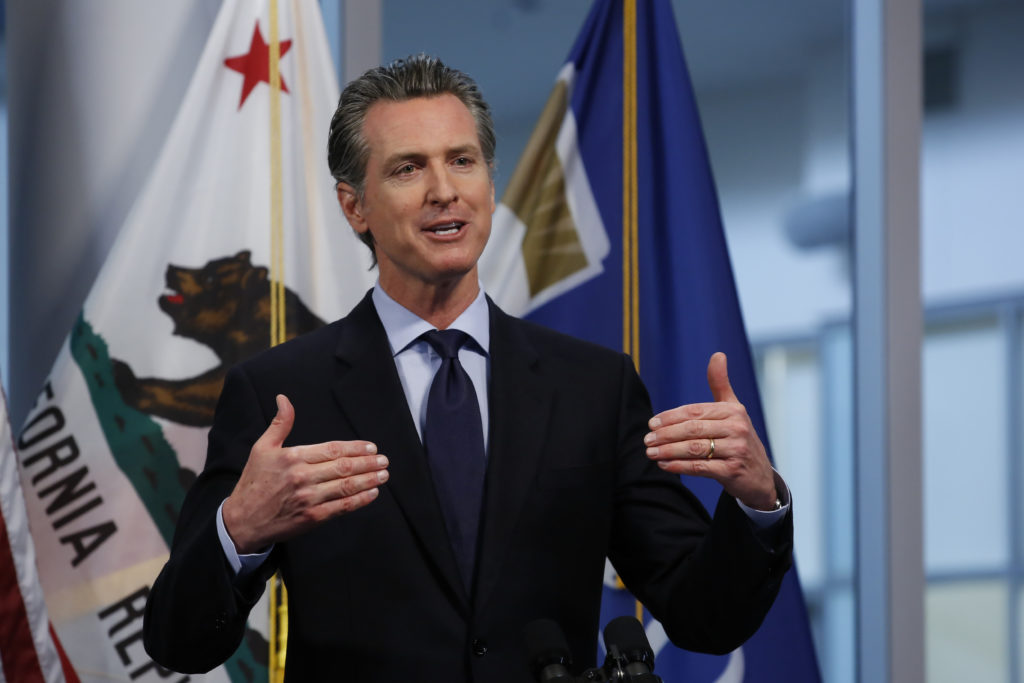 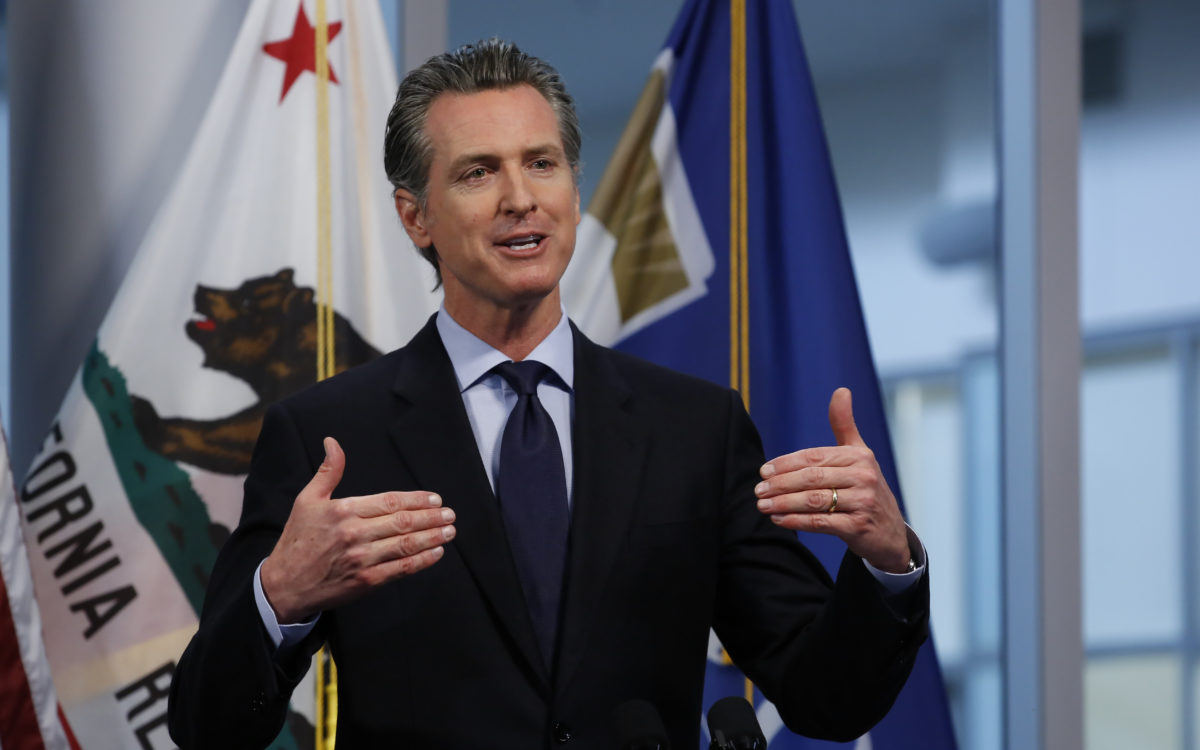 In a surprise announcement Tuesday, Gov. Gavin Newsom suggested reopening schools as soon as late July or early August to mitigate the loss of learning that all students — but especially low-income black and Latino students — have experienced during two months of school closures due to the coronavirus pandemic.

“That learning loss is very real,” Newsom said during his daily update on the coronavirus. “And from a socio-economic frame, from a racial justice frame, this is even more compounding and more challenging. And so it is incumbent upon us to think anew with respect to the school year.”

Reopening schools would be part of the second — and next — of four phases of returning life to normal. Newsom offered no further details about how an early start would work, how it would be paid for or phased in by counties where public health officials would have the final say on conditions for reopening schools. As he was speaking, a panel of finance experts and state officials was warning legislators at a budget hearing not to count on any increases in education spending next year, and that state revenue losses could exceed that of the Great Recession.

In a statement, Superintendent of Public Instruction Tony Thurmond said that an early school start would have a double advantage of addressing “equity issues facing our most vulnerable students” and helping parents and caregivers “in their much-needed return to work.” However, he cautioned there could be cost implications: purchasing protective equipment for school staff and potentially hiring more teachers for smaller classes to meet social distancing requirements.

“If we start school early, we need resources to make it a reality,” he said.

Edgar Zazueta, senior director of policy and governmental relations for the Association of California School Administrators, made the same point. “The governor today gave the clearest indication today that (coronavirus) modeling indicates we will be able to get kids back in the classroom. We’re happy about that. But to be a reality, schools will need resources and support, and it will be easier for some districts than others to open early.”

Newsom’s affirmation that reopening schools would be both a personal priority and integral to post-coronavirus normalcy may hearten 760 nonprofit children’s organizations, advocacy groups and health agencies that asked Newsom, Senate President pro Tem Toni Atkins and Assembly Speaker Tony Rendon in an April 23 letter to “prioritize kids” in the 2020-21 state budget. They included ensuring “sufficient resources for the summer months to provide school meals and to address the significant learning loss that has occurred” as one of their asks.

In an interview earlier this week, Ted Lempert, president of Children Now, which organized the letter, had called on Newsom to issue an executive order for summer learning, similar to what he did last month when he told districts they should focus on distance learning. “Say it now: Make summer learning for students most in need a priority,” Lempert said.

But Assemblyman Patrick O’Donnell, D-Long Beach, made it clear he favors traditional summer school. “It would be better for our students to take summer classes than to simply start the school year earlier,” O’Donnell, chair of the Assembly Education Committee, said in a statement. “Some students need summer school to make up for lost credits and to help boost their GPA to get into college.”

There is unanimous agreement among education authorities nationwide that there is an unprecedented need to start to reverse the loss of learning that students have been experiencing during the school closures. For low-income students whose lives have been most disrupted by the coronavirus in California, the need is critical.

“If not mitigated, the educational and economic disruption caused by this pandemic will lead to lasting academic and life setbacks for current students and those entering the workforce,” the Educational Results Partnership, a Sacramento-based data analytical nonprofit, wrote in a sober assessment.

An analysis this month by the Collaborative for Student Growth, which is affiliated with the research nonprofit NWEA, predicted a substantial impact from the “COVID slide”: a loss of 30 percent of the typical yearly gains in reading and, in some grades, nearly a full year behind in math. That’s the average; it will be worse for children under stress, without a quiet place to study and without access to the internet. In California districts that were caught especially flat-footed by school closures and have struggled since, students may go six months without quality learning.

The coronavirus is “exacerbating the inequalities we knew were there before,” said Pedro Noguera, who directs the Center for the Transformation of Schools at the UCLA Graduate School of Education & Information Studies.

For districts that have been struggling with vague and unfunded plans for distance-learning summer school, Newsom’s option could shift the focus to a more cohesive transition to the start of school.

School districts generally budget a small amount for summer school, to cover special education students who are entitled to year-round services and for courses to put high school students on track for graduation. Expanding summer school significantly this summer would take money districts don’t have — and quite possibly wouldn’t get.

San Diego Unified Superintendent Cindy Marten has calculated a cost of $52 million for what she acknowledges is “a long shot”: a five-week summer school for elementary and middle schools and six weeks for high schools. Los Angeles Unified Superintendent Austin Beutner has budgeted $103 million for summer school but is $50 million shy of paying for it.

However, Newsom also may have to cobble together state and federal money to pay for additional weeks of school. He might commit a piece of the expected $355 million the state will soon receive as its K-12 and higher education share of the federal Coronavirus Aid, Relief and Economic Security Act that Congress passed last month. In an April 15 letter to Newsom, five urban districts, including Los Angeles and San Diego, asked Newsom to make “summer instruction to bridge the academic needs of students” one of the uses.

The CARES Act will directly provide California districts $1.67 billion, with the flexibility to use it to compensate for lost learning. Although that’s an average of about $267 per student, districts will receive funding based on their federal Title 1 enrollment of low-income students, with West Contra Costa Unified entitled to about 20 times as much as nearby wealthier San Ramon Unified. The new money will increase Title I funding by 87%, estimates Marguerite Roza, director of Georgetown University’s Edunomics Lab.

But districts will need that money to cover other unexpected expenses. San Diego Unified calculates it has spent $18 million just on buying new Chromebooks and refurbishing school computers it is distributing to 60,000 of its 100,000 students.

Newsom may be pinning his biggest hopes on more money from Congress. The last round of stimulus/coronavirus aid provided $484 billion for small businesses and medical testing, but didn’t include money for local governments and schools. However, education advocates are optimistic they will be next. A dozen national education organizations are seeking at least $175 billion for K-12 plus $25 billion more for Title I and special education funding for states. California’s share might be at least $25 billion. Newsom, in an April 8 letter to U.S. House Speaker Nancy Pelosi, included a request that “several hundred billion” for K-12 nationwide be part of the $1 trillion in additional help for state and local governments.

An early transition back to school could offer several advantages that State Board of Education President Linda Darling-Hammond mentioned, without referring to Newsom’s plan, at the hearing Tuesday of the education subcommittee of the Assembly Budget Committee. One option could be for elementary and middle school students to return to the teachers they had before schools closed. Those teachers “are best positioned to welcome them,” re-establish relationships and diagnose students’ gaps in learning, she said.

But Heather Hough, executive director of the research nonprofit PACE, said that “to be effective, districts will need clear directives from the state on how the program is supposed to be implemented and the outcomes expected.”

“Lots of districts have requested guidance on what is expected with distance learning,” and haven’t gotten it, she said. The governor should clarify who’d teach the students on the return to school, how many instructional minutes there will be, whether it would be in-person instruction — “endless questions,” she said.