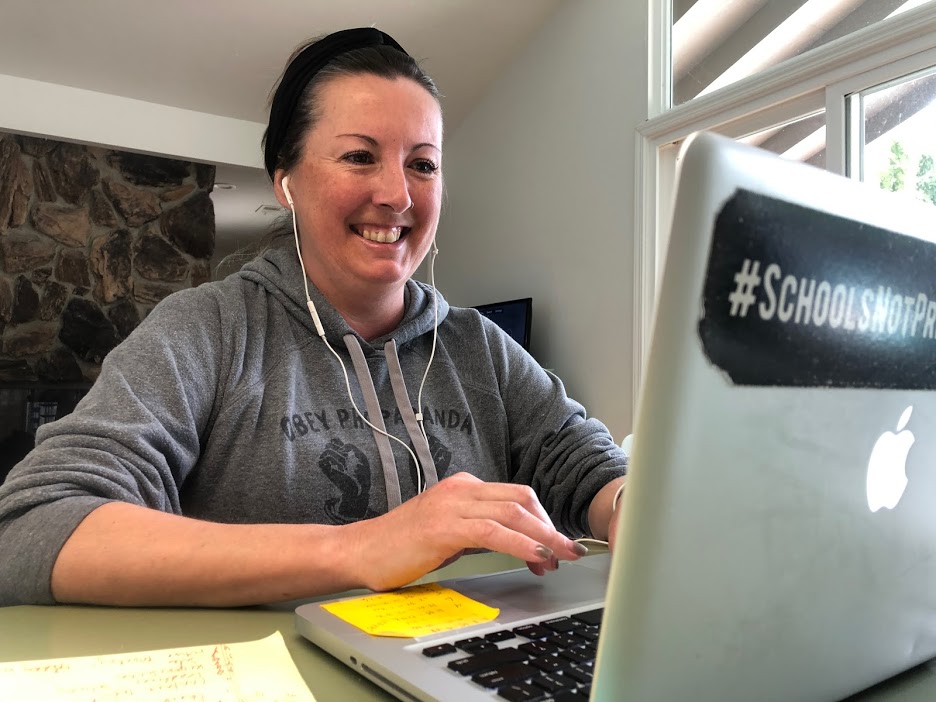 Most school districts intend to move to online learning by end of April.

Kim Minugh, an English teacher at Encina Preparatory High School in Sacramento, checks in with some of her yearbook students.

Kim Minugh, an English teacher at Encina Preparatory High School in Sacramento, checks in with some of her yearbook students.

With California schools remaining closed longer than initially anticipated in response to the coronavirus pandemic, most districts are planning to start more formal distance learning programs in April, after their spring break.

In the meantime, teachers have had to be creative to keep students engaged and learning after campuses shut down in March. Teachers who are tech-savvy and are working at schools that have enough computers or tablets for all students have started teaching online, while others are communicating with students and their families about suggested reading or assignments on education-based web services, such as Google Classroom or Schoology. They have also been emailing or texting students and parents.

When schools closed, Minugh and other teachers in the San Juan Unified School District were instructed to review previous lessons and offer students enrichment resources to enhance their learning, instead of introducing new concepts.

Almost all of the students at Encina Preparatory High School are from low-income households. Some don’t have computers or access to the internet at home, Minugh said.

Officials at her district began distributing Chromebooks to students last week. The district intends to shift to a model of distance learning that allows for new assignments and new learning by April 13, according to its website.

In the meantime, Minugh keeps in contact with her students through Google Classroom, which allows teachers to post and grade assignments, and the Remind text messaging app. Her first Remind notification went out March 16, the first full day that school was out. She told her students where they could pick up free breakfast and lunch the next day.

Students in Karl Grubaugh’s AP economics class at Granite Bay High School, in an upper-middle class community 16 miles east of Sacramento, are having an entirely different experience. They missed a few lessons after their school closed, before picking up where they left off.

Grubaugh teaches the class twice a week during what would have been the school’s second period from his Cameron Park home using Zoom, a video conferencing program.

Grubaugh, who has 140 students in four classes, takes written questions through the Zoom chat function and often stops lectures to quiz students about what they are learning. He records each 90-minute lesson and uploads it to You Tube so that students who couldn’t attend the live lesson will be prepared for quizzes and tests.

Grubaugh, who also teaches advanced journalism, is trying to adapt the same lessons he would have been teaching in the classroom to accommodate remote teaching.

Getting everyone acclimated to online classes has had some glitches. Ringing cell phones sometimes disrupt the class when students forget to mute their microphones. Parents and siblings inadvertently walk in front of students’ screens. But overall, students rate it a success, according to a recent survey given by their teacher.

Grubaugh, who lives in El Dorado County — a county away from his Placer County students — is aware that it is important for them all to stay connected. After class he asks students to unmute their microphones and to wave and say goodbye to one another and him.

“Stay well. Be well. Wash your hands and stay strong,” he said.

Los Angeles Unified teacher Brent Smiley quickly learned that the secret to teaching a class of 33 middle school students on Zoom is to use the mute button so only he can be heard.

“You have to shut that down and remind them they are in class,” he said of the chit-chat between students.

Smiley teaches seventh- and eighth-grade history at Sherman Oaks Center for Enriched Studies in Los Angeles. His classes meet twice weekly online. He videotapes the lesson for students who can’t make it. Students are also expected to work independently three hours a week.

It isn’t difficult for Smiley or his students, who have always done their class assignments online. Smiley said he went entirely online when he first came to the school two years ago. At the time, classes began even while the campus was under construction.

Smiley is encouraged by the way his colleagues are adjusting to online instruction.

Al Rabanera teaches five algebra classes at La Vista High School, a continuation high school in the Fullerton Joint Union High School District. It isn’t possible to just offer his students review; they have to learn new material or they will be playing catch-up and could risk not graduating if they don’t make up credits, he said.

After one week of remote teaching, he finds himself constantly improvising and modifying.

“If you want to do an activity and you have to explain it, then how do you modify, knowing students will connect at different times? If they don’t have a printer, how to modify? If an app doesn’t work on their Chromebook, what to do?” he said.

Rabanera marks daily attendance by the response to a warm-up question, and he posts an agenda with attachments in Google Classroom. Students can take digital notes, use Google Draw, a freehand drawing software, to do homework, and send it back after taking a picture of the work. For now, with only 70 percent of students online after the second week, he’s not considering real-time instruction with Zoom or Google Hangout.

Looking ahead, he’ll consider using Zoom to break students into small groups, assigning more real-world problems and using the free interactive lessons on Khan Academy. There are plenty of ideas on social media, but the reality is, he said, “The quality of instruction will drop because you need to be in front of the kids.”

Thomas Courtney has taught school in China and South Korea, where he said, “they got their act together in terms of online learning.” But in two decades teaching in San Diego Unified, he has had virtually no professional development in technology. “So now, in elementary schools in the district, this is the moment where folks go, uh-oh.”

The training will come over the next three weeks, as the district prepares a full online operation for all grades starting April 27.

Meanwhile, Courtney has been reaching out to his fifth-graders at Chollas Mead Elementary School and calling parents every two days for a two-minute check-in. He has uploaded lessons he recorded on Google Classroom and created a Facebook page and invited parents to sign up.

But three-quarters of his families don’t have internet service or a device at home, other than a cell phone. The district promises to get Chromebooks and hot spots to families by the start of remote teaching.

What they won’t be able to supply are what Courtney said his children, 90 percent of whom are from low-income families, are really missing: art and music, hands-on science, the karate lessons he offers and the newspaper he started.

In response to the digital divide that often leaves low-income students without the technology they need to take classes online, many California schools are providing needed computers and internet access to those students.

Third-grade students in Jesus Galindo’s class at Lincoln Elementary School in Richmond, in the east Bay Area, were already using websites like XtraMath, Epic and Khan Academy for assignments, even before schools closed. Teachers and parents have been communicating through ClassDoJo — an education messaging app.

Almost all of the school’s students, part of the West Contra Costa Unified district, are from low-income families.

Galindo closely monitors which students are signing on and reading and completing math problems in the online programs. The programs allow him to see what skill they are working on and if they need help. To stay connected to his students he posts one or two videos to You Tube each day, usually featuring him reading a book requested by parents or students.

The district is encouraging students to do the online work suggested by their teachers, but it is not mandatory, according to Marcus Walton, district spokesman. That will change after spring break, when the district is expected to roll out a more robust online learning program.

In the meantime, Galindo checks in with parents every other day to see if there is anything they need, including food and other resources. So far, he has made three house calls to families who needed help setting up the hot spot provided by the school district.

The biggest hurdle for Galindo’s students is that they miss being in class. “Going to school is a way of life,” he said. “They go to school, they learn, they have fun and we build relationships with each other … and then it’s gone,” he said.