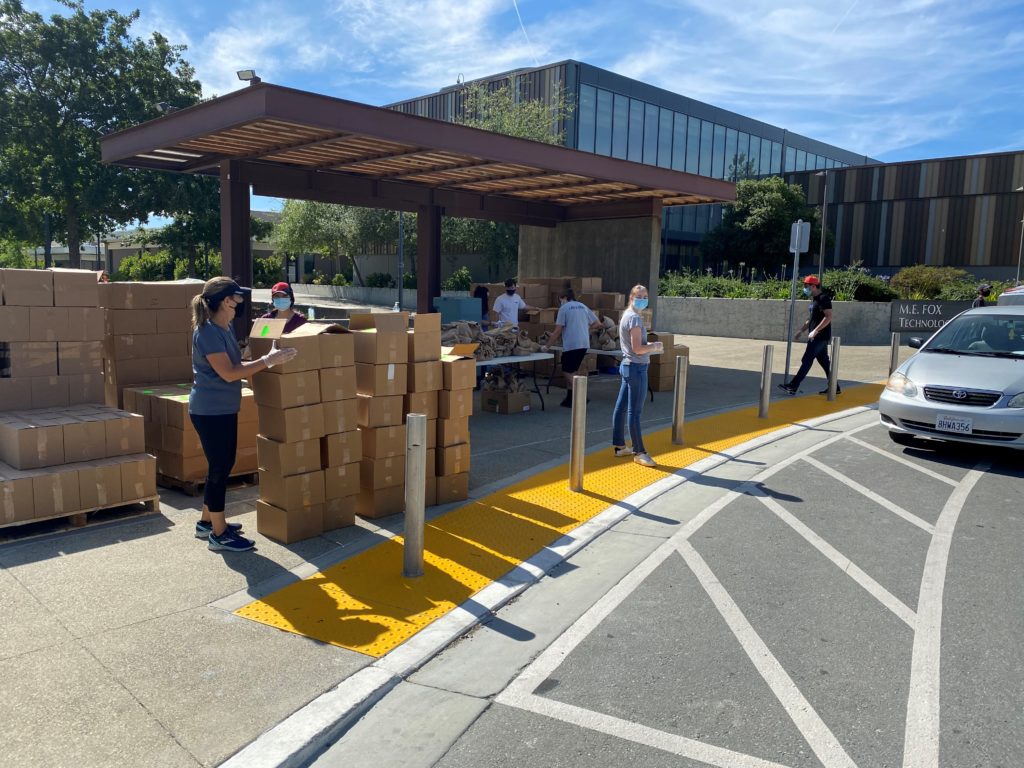 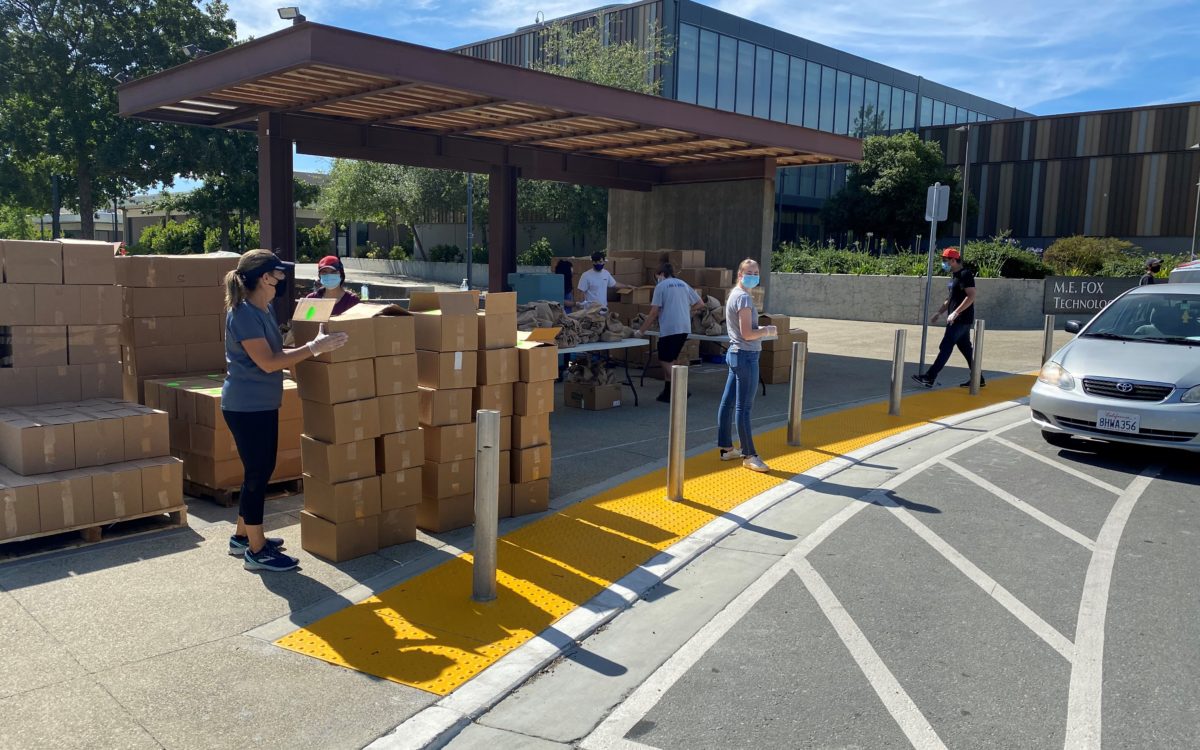 With reduced work hours and a baby on the way, Maraya Bermudez stocks up on groceries for the week at the food pantry on her community college campus.

She frequented the Fullerton College food pantry sparingly during the school year, but she now goes every week to pick up bags that often include rice, beans, vegetables, fruits, milk and snacks. A former foster youth, she has also been eligible for debit cards from her college that she can use for groceries and gas. Bermudez, 20, was laid off in March when the pandemic shut down the restaurant where she was working as a waitress. Her only income comes from her clerical job for the campus foster youth office and what her boyfriend earns from a delivery company.

Even before the Covid-19 crisis, California community college students were identified as needing help with getting food. An estimated 40% of community college students experience very low or unstable access to food, according to a 2018 report by the California Speaker’s Office of Research and Floor Analysis. Food insecurity can range from a significant reduction in access to food to less-nutritious food.

That new funding didn’t survive the recently negotiated state budget. But there is a provision that allows the community colleges to divert funds to help food pantries from the Student Equity and Achievement Program, which is aimed at improving access, retention and transfer rates for students from underrepresented backgrounds. But the $475 million program got no new funds.

“If they move the program to SEA without increased allocation over 2019-20 funding, then it just means that in order to cover that something else has to go,” said Karen Reyes, director of the Student Resource and Support Network at Cabrillo College near Santa Cruz.

Out of 46 responses to an EdSource survey of the 115 community colleges, all 46 have campus food pantries, with 26 continuing to distribute food despite campus closures. Twenty-one say their food pantries have seen an increase of applications for food and/or an increase in the amount of food being requested.

“Even if they added money to SEA, it won’t be enough,” Reyes said. The need is too high. The Cabrillo College food pantry relies on strong relationships with local community food banks in order to meet demand, which many other campus coordinators said is also the case for their food pantries.

Food pantry coordinators at the Fullerton campus, where Bermudez is a student, have seen an increasing level of need since the pantry’s founding in 2012, but the pandemic has led to an acute increase.

In a typical week during the school year, before campuses were ordered to shut down mid-March, they would service an average of 200 students.

In April, they launched a drive-thru food distribution together with Sodexo, the campus food service provider. During the first week, over 400 students signed up to receive bags of food that included a combination of vegetables, milk, cheese, and non-perishable items. Since then, they’ve averaged 360 students during their weekly distribution, called the Healthy Hornet Drive-Thru, which will continue into the summer and fall.

“We entered this pandemic with California community college students representing or sharing some of the highest levels of basic needs and security,” said Lizette Navarrete, vice-chancellor for the College Finance & Facilities Planning Division.

California community colleges, the largest higher education system in the nation, received hundreds less in aid per student from the Coronavirus Aid, Relief, and Economic Security (CARES) Act than the University of California and California State University system — $393 per student versus $1,065 per student at CSU campuses.

“It left out students in career technical education courses, workforce training programs, a lot of the core population that community colleges serve,” she added.

It left out undocumented students, as well, who are also ineligible for unemployment benefits. California community colleges may be getting a reprieve on that front. A federal court on June 17 said the U.S. Department of Education cannot withhold federal aid from undocumented students and other students who meet CARES Act qualifications. The government said it would appeal the decision.

Half of the funding for each campus from the CARES Act was distributed directly to students who applied for grants of up to $500 and met the federal conditions. The remaining amount was used to cover college costs due to academic disruptions caused by Covid-19. Funding distribution to each campus was based on the number of full-time low-income students who received the federal Pell Grant.

During the school year, Wynter Gonzalez visited the food pantry on her campus two or three times a month, usually taking a week or two worth of food and rationing it out.

“I’m very grateful for the assistance,” she said. “Without them, I would’ve starved or wouldn’t have gotten help.”

Gonzalez, 18, a Citrus College student studying theater arts, said she has essentially been homeless for six years, staying with various friends on their couches or floors. What she picked up from the pantry at Citrus College in Los Angeles County was her main source of food until the pandemic caused the food pantry to shut down. They have switched to handing out electronic debit cards, but Gonzalez is now relying on a local church for food because it’s easier for her to access.

The college has seen an increase in the number of students requesting food, according to their basic needs coordinator.

“This is one of those needs that we cannot address via Zoom or via the phone,” Lipiz Gonzalez said.

Their capacity to serve students, however, remains limited due to budget constraints.

“We would be able to increase the food volume, help students with families, have a wider array of healthy food options,” she said, describing how additional funding would be used. “In this era of Covid-19, we would be able to offer the Healthy Hornets beyond the three hours on Thursdays.”

When the pandemic began, she helped establish a drive-thru food distribution center in partnership with a local food bank, Second Harvest. But much of their allotted funding has gone toward debit cards to purchase food, which has quickly added up.

“We have students who are homeless — they can’t take the boxes, so they take the gift cards,” Hernandez said.

As she prepares to transfer to Cal State Fullerton this fall, north of Anaheim, Bermudez knows she’s better-off than many other students who have lost their jobs. At least she can rely on the food pantry for food.

“If I wasn’t pregnant and didn’t have the pantry or WIC, it would’ve been really hard,” said Bermudez, referring to the federal Women, Infants, and Children program for low-income people at nutritional risk. “I contemplated not transferring and just waiting it out.” Her plan is to earn a human resources bachelor’s degree and a psychology master’s degree.

Bermudez, who is finishing up two final classes at Fullerton College this summer, is planning to use the food pantry when she transfers. “If CSU Fullerton offers it this upcoming fall, I’m totally using it,” she said.

Marlene Cordova, a journalism student at California State University, Los Angeles and a writer for the California Student Journalism Corps, contributed to this report.