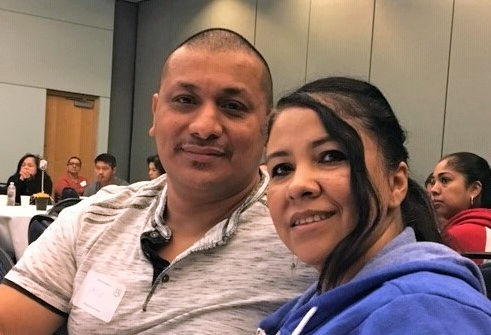 Many parents did not attend college and want to learn how to help.

It wasn’t a weekend music concert or sports event that brought Vilma and David Martinez to the Cal State Los Angeles campus on a recent Saturday morning. Instead, they came to hear counselors and faculty suggest ways to encourage their son’s success at a university where only about half of incoming freshmen finish within six years.

They and the other 160 parents who showed up for that “Parent Academy” session are part of a widening trend by universities to improve graduation rates, especially among students who are the first in their family to attend college. Parents increasingly are seen as partners with campuses in supporting these young adults when they encounter emotional, bureaucratic, financial or academic obstacles. In some cases, that may mean parents need to do less supervising.

Such gatherings for parents can be part of quick summer orientations or, as at Cal State Los Angeles, mid-semester deep dives. Whatever the timing, they are seen as especially beneficial for the growing number of California students whose parents did not attend college. Those families — along with immigrants who may have attended universities in other countries — say they want to learn more about what their children are experiencing and how to respond to possible troubles.

“The transition from high school to university is a big change,” said Los Angeles resident David Martinez, whose son David is a Cal State Los Angeles freshman and the first in the family to attend a university. “Even though he is an adult and is capable of coming here and doing ok, it’s easier for him to make those changes with us behind him.”

A carpenter who was trained through his labor union at community college but who did not earn a bachelor’s degree, the elder Martinez said he attended the Saturday academy because “there’s a lot of dropouts, and we don’t want that to happen to our son.”

Such worries can be justified.

Across the 23-campus California State University system, nearly 2 of every 10 freshmen don’t come back for sophomore year. Only 28 percent of students who start as freshmen graduate in four years although almost two-thirds graduate in six years. The numbers at the Cal State Los Angeles campus are even more challenging: only 11 percent finish in four years and 52 percent in six.

The system has embarked on a multi-pronged effort to turn those numbers around. Parents programs are part of that.

The Cal State Los Angeles program is thought to be among a handful around the country that deliberately keep parental sessions going well into the school year when crises may occur.

Most colleges and universities these days offer summer informational sessions for parents and increasingly conduct Spanish language versions, according to Amy Swank, who is president of Family Engagement in Higher Education, a national organization of 540 schools that provide parent programs. Many now have a parent relations office or parent webinars as well.

Whatever the forms, all the programs recognize that “family members can help the student be more successful if involved in an appropriate way,” added Swank, who is also director of parent and family relations at Gonzaga University in Spokane, Washington. Whether parents never attended college or are alumni of their children’s college, “they all want the same attention paid to safety, housing, health and well-being,” she said.

The Cal State Los Angeles parent academy began about six years ago and now is offered three times during the school year on a campus whose students mainly commute from home. The five-hour-long sessions, with lunch provided, are simultaneously conducted in English or Spanish in separate rooms.

The goal “is to help parents understand what their kids are going through,” said Martha Contreras, assistant director of Educational Opportunity Program admissions and outreach. Parents should be aware of the pressure students face, particularly those who are among the first in the family to attend college.

“They feel if they fail, they are not just failing themselves, they feel they are failing the whole family,” she said.

At a recent session, campus experts talked about spotting symptoms of depression and anxiety and how to access counseling. They also discussed how to set up a quiet study spot at home for commuter students, how to react calmly when a student switches majors, how to encourage involvement in campus life.

And in an unfortunate sign of the times, parents peppered officials with questions about safety procedures if a gunman threatens the campus. Cal State Los Angeles experienced a false alarm about a possible shooting last semester. Vilma Martinez, a retail manager who attended college in her native Honduras and took some community college classes in California, praised the campus’ handling of the temporary evacuations but said she wanted to learn more about “what steps schools are taking to keep the kids safe.”

Some parents attended even though they are veterans of sending children to college. Among them attending the Spanish sessions were William and Damarys Lacayo, immigrants from Nicaragua whose son Elliott is a Cal State Los Angeles freshman. Two older children have finished college.

“We had some knowledge already, but it is always good to learn more,” said William Lacayo, a painting contractor who attended several years of college in Nicaragua before his education was interrupted by civil war.

Damarys Lacayo, who runs a skin care business, said, that she wanted to be a sounding board for her son: “With all the stress they have in the new environment at the university, how can we help? Sometimes the most important thing is just to listen, don’t criticize and be more patient.”

In other cases, officials have to urge so-called helicopter parents not to hover so closely after high school. Christopher Johnson, the university’s director of new student and parent programs, said the seminars try to let such parents know that they can still help but that they should “walk away a little and allow the students to be advocates for themselves.” Still, some parents remain shocked that they no longer have automatic access to their children’s college academic and health records even though they often are financially supporting them.

Smartphones and other technologies “have changed the dynamics of college parenting,” keeping close bonds over geographic distances but with pitfalls, according to a 2017 article in the journal published by Swank’s group. The article warns that too much parental involvement can “inhibit student autonomy.”

No detailed study has tracked the college success of students whose parents participate in the programs, but experts say they think such sessions help, particularly in reducing risky behavior.

At Cal State Dominguez Hills, where more than half of the students are among the first in their families to attend college, eight parental sessions were scheduled last summer in both English and Spanish. “Parents, like the freshman, are transitioning,” said Doris Lee, associate director of outreach and school relations. They mainly want to know where a student can turn for help if needed, she said. That is true “whether a parent never attended college or attended college 25 years ago and so much has changed that they need a refresher.”

The University of California’s nine undergraduate campuses also offer online guidebooks and videotaped webinars for parents to learn about policies and student life.

The University of Southern California’s Neighborhood Academic Initiative provides college preparatory classes on Saturdays to middle- and high-school students from areas near the campus. (If admitted later at USC, participants are awarded full scholarships without loans.) Parents are required to attend seminars about college applications and college life.

“Retention (in college) is very important to us. We understand there a lot of reasons students can struggle once they get into college,” said Mimi Bolton, a program adviser. Some discussions involve parents’ fears, especially about allowing young women to leave home and how to let older teenagers ease off childcare responsibilities for younger siblings.

About 200 parents attended a recent Saturday session on the USC campus. Karelin Huezo and Sergio Ramirez have one son who completed the USC prep program and now is enrolled at CSU Northridge and two younger sons in the Saturday classes. “Even if they are 18 years old and think they are on their own, they really are not on their own. They really want their parents to be involved,” said Huezo, who works as a buyer for a personal care business and attended community college.

Ramirez, a big rig driver whose formal education ended with high school, explained why the family emphasizes getting through college: “Nowadays, the world is getting tougher and tougher and you have to be prepared for what’s ahead. And that’s why you need to get your education.”

This story was published concurrently by the Los Angeles Times.