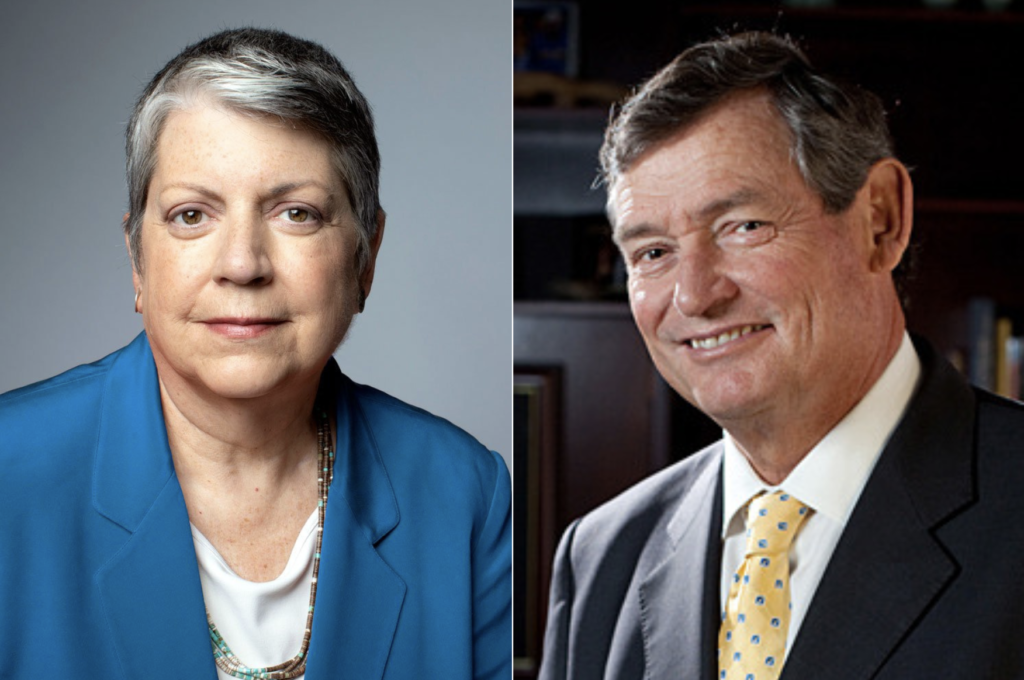 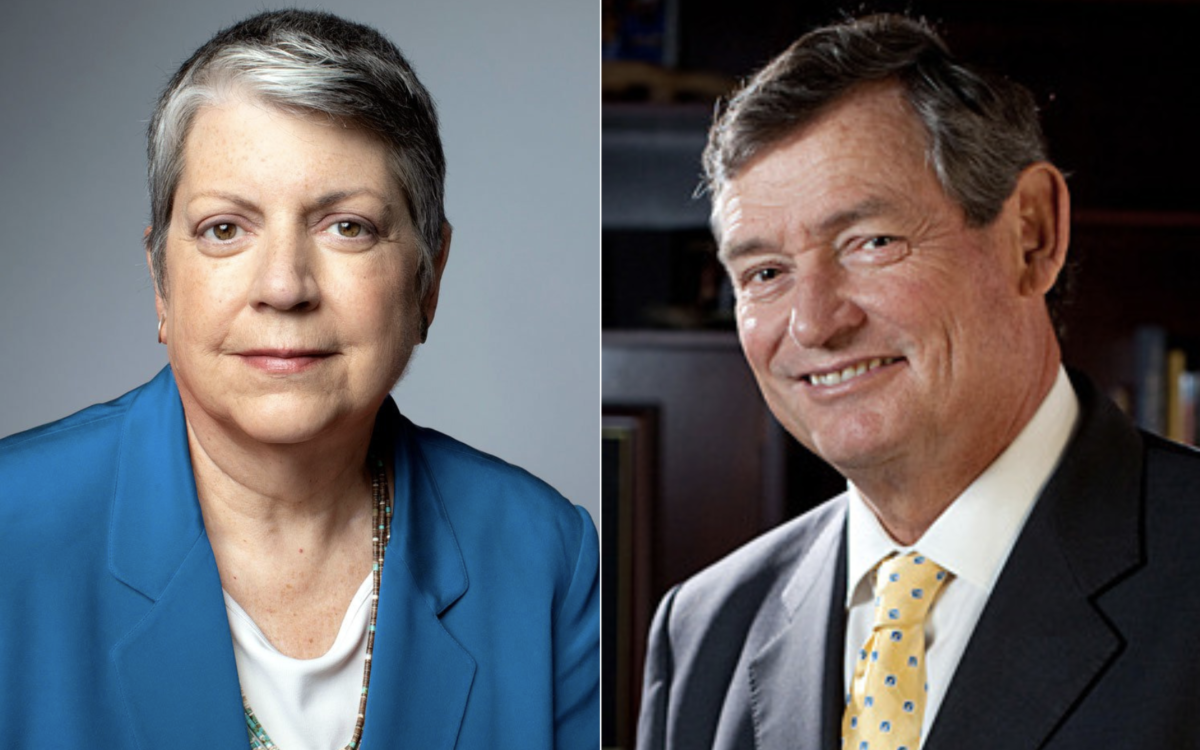 With such lofty and perhaps unrealistic goals, unprecedented simultaneous searches are underway to fill the top leadership positions at the ten-campus University of California and at the 23-campus California State University. The unusual timing of the recruitment efforts brings complicated challenges and possible benefits, experts say.

The efforts to replace UC’s president Janet Napolitano and CSU chancellor Timothy P. White by summer have raised worries about competition between the two systems for academic talent, particularly among those who have strong track records in expanding educational opportunities for low-income, Latino and black students.

At the same time, the prospect of two new executives also has sparked hopes of more cooperation between UC and CSU on education reforms and seeking greater state funding for enrollment and financial aid.

Having the two vacancies “creates an excitement about the future of higher education in California,” said John A. Pérez, chair of UC regents and former state Assembly Speaker.

“The interesting thing is that having a new president of UC and new chancellor of CSU come on at similar times means that neither is the junior partner of the other,” he said. “Both get to hit the ground running as real partners. And that’s important.”

Pérez said he is not worried about possible competition.

While both jobs require some “overlapping skill sets,” the challenges and missions of UC and CSU are different enough that there shouldn’t be any conflict, he told EdSource. UC, which includes hospitals, law schools, doctoral programs and federally funded energy labs, has more of a research orientation while CSU, he noted, emphasizes bachelor’s and master’s degree completion and serves a much larger student body — 480,000 compared to UC’s 280,000.

“Are there people who could do either job? Yes. But I think with different search processes each institution will in the end find the right fit for it,” said Pérez, who has helped conduct public hearings for the UC search committee, including two this week, at UCLA and UC Riverside.

The selections will impact the 760,000 students enrolled at the two systems and their faculty and staff — 53,000 at CSU and 227,000 at UC, including hospitals and research labs. Given the sizes and prestige of California’s systems, their leaders could affect higher education nationally.

Based on the formal recruiting statements and public sentiment at recent hearings, the perfect candidate for both would be “a visionary leader,” with a prestigious Ph.D. and great abilities to lobby the Legislature, raise private funds, treat labor unions well and administer enormous bureaucracies and budgets. Plus, they would be public spokespeople for the value of higher education and social justice advocates, seeking to protect undocumented students and increase enrollments of Latino and black students without violating state rules against affirmative action.

With those expectations, it may seem that only a Superwoman or Superman could do the jobs. But, in fact, the positions share much authority with their governing boards, faculty, the governor, legislators, labor unions and alumni groups. And at both UC and CSU, individual campuses have significant autonomy and their administrators and faculty make many decisions.

While search officials are staying mum on candidates’ names, speculation around the state persists on campuses and among advocacy groups. That the UC search specifies “a respected scholar” seems to indicate that the UC regents will not again choose someone from outside academia, such as they did with Napolitano, a lawyer who previously had been U.S Secretary of Homeland Security and Arizona governor but had no experience in academic administration. There was also an issue of leadership style. Some faculty and legislators felt she did not consult enough with them on some sensitive issues.

Salary may be an issue since some of those leaders outside California are paid much more than the $570,000 salary Napolitano received and the $477,771 salary White was paid. (In addition, both received benefits and housing.)

Assemblyman Jose Medina, chair of the Assembly Committee on Higher Education, said he considered the timing of two searches a good opportunity, especially since the hiring will coincide with the second year of Gov. Gavin Newsom’s administration.

“It’s a new governor, a new start, with high expectations for higher education,” Medina said. “And I am confident that at the end of the day both UC and CSU will find higher caliber folks to take the reins.”

He said there could be some competition since both jobs are to run big systems with multiple campus and multi-billion-dollar budgets.

“Both have to know how to navigate the political systems, and have to have political savvy,” Medina explained. “These have not been times where I would say the budget has been flush with money for higher education. So they will need to be leaders to make the most out of what they have and look for creative ways to perhaps bring more revenue to their systems.”

CSU’s search committee of eight systemwide trustees and White is chaired by trustee and former American Film Institute leader Jean Picker Firstenberg and has held six public hearings around the state. The next CSU chancellor, according to many who spoke at the hearings, should try to reduce class sizes for undergraduates, add counselors and make transfers easier from community colleges. They also will need to provide more aid for housing and food, build new and renovate existing campus buildings and get along better with faculty and staff unions.

The UC search panel is composed of ten UC regents (including Gov. Newsom, who did not attend the UCLA event) and is chaired by regent Gareth Elliott, a Sacramento lobbyist who had been a legislative aide to former Gov. Jerry Brown. The panel is expected to conduct three hearings at other campuses in weeks ahead. (Some sessions were organized with the help of the College Futures Foundation, an Oakland-based philanthropic foundation that promotes greater access to higher education.)

Among the speakers at UCLA this week was Luis Santana, executive director of Reading and Beyond, an early education, tutoring and job training organization based in Fresno. He said he wanted the next UC president to try new approaches to boost enrollment and graduation rates for low-income and under-represented minorities.

“Education is the way out of poverty,” he emphasized. He urged making UC classes more accessible, with more offered online and on evenings and weekends.

Ernesto Arciniega, a UCLA graduate student of Hispanic literature who is president of the Hispanic/Latinx Graduate Student Association said many students want a UC president who “has a larger social consciousness about those who are really voiceless in our community.” The next UC leader should assist students who are immigrants, low-income and in the first generation in their families to attend college, along with students, faculty and staff from under-represented ethnic and racial groups, he said.

Dashay Richmond, a UC Irvine senior who is board chair of the systemwide UC Student Association, said he hopes the next UC system president comes directly from higher education and is “someone who knows how to navigate the system” without a training period. After controversies during Napolitano’s time, including her past handling of immigration issues when she was at Homeland Security and disputes with legislators over spending for the UC president’s office, it will be important for her successor to be able “to jump right in and have a sense of what’s going on.” Students’ basic needs, such as trying to afford housing and food along with tuition, should top the candidates’ agenda, he added.

Both universities have hired national search firms to help with recruiting. Advisory groups of faculty, staff, alumni, students and campus officials also will have a say, but the final decisions will rest with the two governing boards.

Adrianna Kezar, who is co-director of the Pullias Center for Higher Education, a research organization at the University of Southern California, told EdSource in an interview that the two public universities are likely to attract leaders with different expertise, reflecting the missions.

At CSU, White has made progress on improving retention and graduation rates for a student body that is more non-traditional, older and more diverse than UC. CSU system needs to continue those efforts, according to Kezar. And with its strong emphasis on teaching, the next CSU chancellor must preserve good relationships with faculty, she said.

Since the two new academic leaders will be starting around the same time, they are more likely to socialize and work together, Kezar said.

“I think it’s an incredible opportunity to get more cooperation between systems,” she said. “The state will work better when the systems are working in cooperation.”