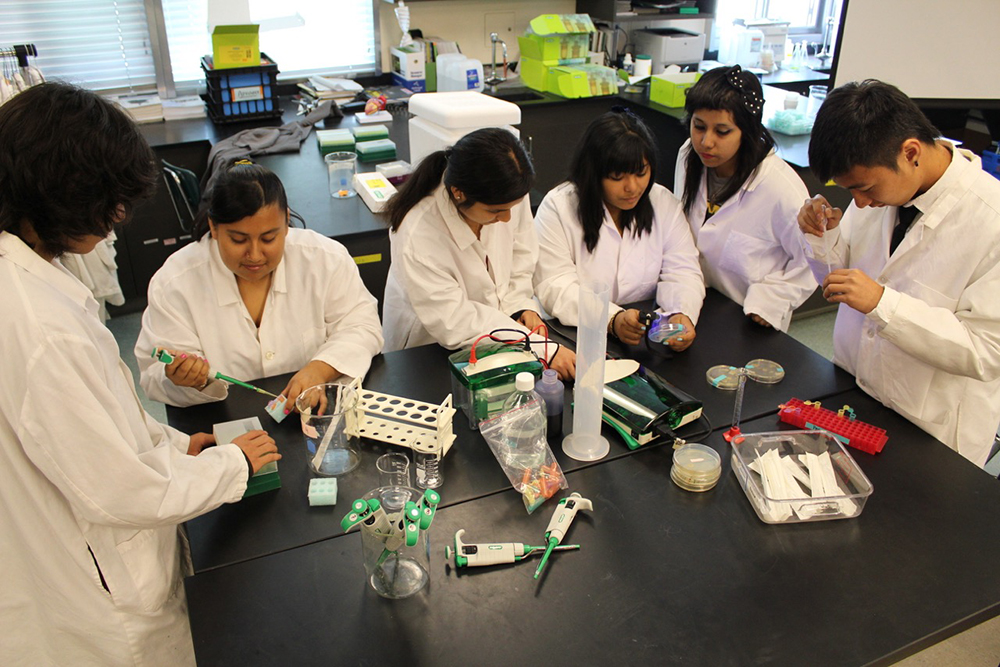 As California leaders push for more math and science education through new K-12 standards, the state’s largest district wants to ensure high-quality instruction by expanding a seal of approval process for schools that specialize in science, technology, engineering and math, or STEM.

In Los Angeles Unified, STEM learning often looks different from campus to campus. And campuses can decide on their own if they want to label themselves as a STEM school. But as the number of schools with STEM programs has increased across the district, officials say it has become difficult to know whether these schools are delivering on their promise of high-quality science and math learning opportunities.

“Some schools were really embracing the whole STEM framework, and then I saw others where there was no engineering and little technology,” said Los Angeles Unified school board member Nick Melvoin, who has pushed for the certification. Melvoin says he sees a huge level of variance among the STEM schools that he has visited in the district.

Nearly 250 out of 1,386 Los Angeles Unified schools designate themselves STEM or STEAM schools, an acronym that includes the arts to encourage creativity while engaging students in scientific discovery and problem solving. A total of 31 schools have been certified so far, and 36 schools are going through the process.

Often these schools have curriculum that puts more emphasis on combining science disciplines and technology than traditional schools, as well as prioritizing hands-on science experiments and other STEM learning activities.

The vast majority of the district’s STEM schools are magnets, meaning schools or programs within schools that students from across the city can apply to attend instead of their local school. About 75 are traditional schools that enroll students from the immediate neighborhood.

The L.A. Unified certification lasts for four years and is not mandatory for schools to call themselves STEM- or STEAM-focused. Those that pass the certification receive a badge they can put on their school website, but no additional funding.

Only a handful of other states, including Utah and Georgia, have implemented statewide programs to designate STEM schools, but no such program exists in California.

Schools seeking the certification are judged on a five-part rubric that evaluates their goals for the STEM school, how engaging the learning environment is, infrastructure such as computer access, quality of instruction and partnerships with community-based groups whose work connects with what students are learning in the classroom.

Proponents of the certification say it helps explain what parents and students can expect from these schools, and offers school leaders a chance to seek help from the district on how to improve their STEM courses if they are unable to meet the criteria.

As Los Angeles Unified seeks to ramp up accountability over STEM schools, the state is undergoing a major transformation in the way it teaches STEM subjects. Over the last decade, California has adopted new standards in math and computer science, as well as the Next Generation Science Standards, to give more students exposure to those subjects and prepare them for college and careers in STEM.

But an obstacle to that effort is a wide gap in access to and achievement in math, science and computer science. Last month California released its first test scores for a new test aligned with the new science standards, and across all grades, 14 percent of black students and 19 percent of Latino students met or exceeded standards, compared with 44 percent of white students and 59 percent of Asian students. Similar patterns have shown up in state standardized math tests.

“This an equity issue. If you don’t have a certification process to calibrate STEM schools, you run the risk that not everyone in that STEM school has access to the pathway,” said Amy Pedersen, STEAM coordinator for L.A. Unified who has helped lead the development of the certification.

“The biggest problem that STEM has is that there are so many definitions of what it means,” said Carlos Lauchu, principal of the Science Academy STEM Magnet, a 6th-12th-grade college-prep school in Los Angeles Unified that recieved the certification.

Classes at Science Academy STEM Magnet combine science, engineering, math and coding, and many lessons focus on hands-on projects and experiments. The school has a technology lab period where students research and propose a long-term project that contributes to their own lives or the global community. For example, one 6th-grade student designed and 3-D printed a prosthetic finger, and now in 7th grade has built an entire hand that can move based on impulses in an arm.

Students must apply to attend Science Academy STEM Magnet, whose student enrollment is about 80 percent white and Asian, while the district as a whole is 74 percent of students are Latino, 8 percent African American, 10 percent white and 4 percent Asian. But district leaders hope it can be one model for other schools in the district, and that having a certification will help schools raise their expectations for STEM learning experiences.

“When it comes to STEM, you won’t have clones of schools. Schools have different resources and cultures and teachers have different qualifications. Everyone is unique, and that’s good,” said Lauchu, who provided input on the certification rubric. “But it’s important that there are some ground rules.”

One reason STEM schools have proliferated in recent years is the pressure on schools to distinguish and market themselves to families considering other options, such as charter schools, Melvoin said. But without a common understanding of what a STEM school should offer, schools could end up selling parents on sub-par courses and curriculum, he said.

“I am a believer in parent school choice and making sure that it’s not just high-information parents who get into a STEAM school,” he said. “But if three schools are high quality and seven are just throwing on a STEAM label, that’s unfair.”

Cowan Avenue Elementary is one L.A. Unified school that is in the process of obtaining a STEM certification.

“From a teaching perspective, everything is changing,” said Christina Corleone, a 4th-grade teacher at Cowan Avenue. Previously, she would follow along with a curriculum on a given subject, she said. But now she’s working to combine the Next Generation Science Standards with math and computer science standards in each lesson. “That’s not typical,” said Corleone.

To bring some real-life examples of STEM into her classroom, Corleone centers some of her STEM lessons on the brain. She even had one of the world’s leading neurosurgeons, Dr. Keith Black, speak with students via live video chat. “Instead of just reading about it, I’m thinking who in the real world can I bring in? How can I get them to internalize that they can be neurosurgeons?” Corleone said.

Cowan Avenue has had to make several adjustments to align itself with the certification rubric. The school purchased new math curriculum materials and classroom technology, switched most of its non-fiction English language arts texts to pieces about science and introduced robotics into classrooms.

“I have to be honest with you, it cost a lot of money to buy technology and robots,” said Richard Da Sylveira, principal of Cowan Avenue. “It’s painful for me to think about.”

He said the school spent close to $30,000 of its own discretionary funds on new curriculum materials, robotics, software and other materials, in addition to a district-funded STEM lab that cost nearly $25,000.

Los Angeles Unified is the only district in California with the certification so far. But other districts and county offices of education in the state, including Riverside, are working with Los Angeles officials to develop something similar.

“Right now there is no process for schools to self-identify with STEM,” said Yamileth Shimojyo, a STEM administrator for the Riverside County Office of Education. “We receive a lot of inquiries (from teachers and administrators) about what STEM is and help me define STEM. Now we are at a spot to respond to that need and create something useful to our schools that want to be a STEM school.”

Melvoin said he hopes the certification process will act as a “needs assessment” for schools that don’t meet the criteria, and to identify and work with the district on areas where they need resources and improvement.

“I get there are fads in education, but we need some kind of calibration and credibility,” he added. “So when we call schools STEM or STEAM, we want it to mean something.”