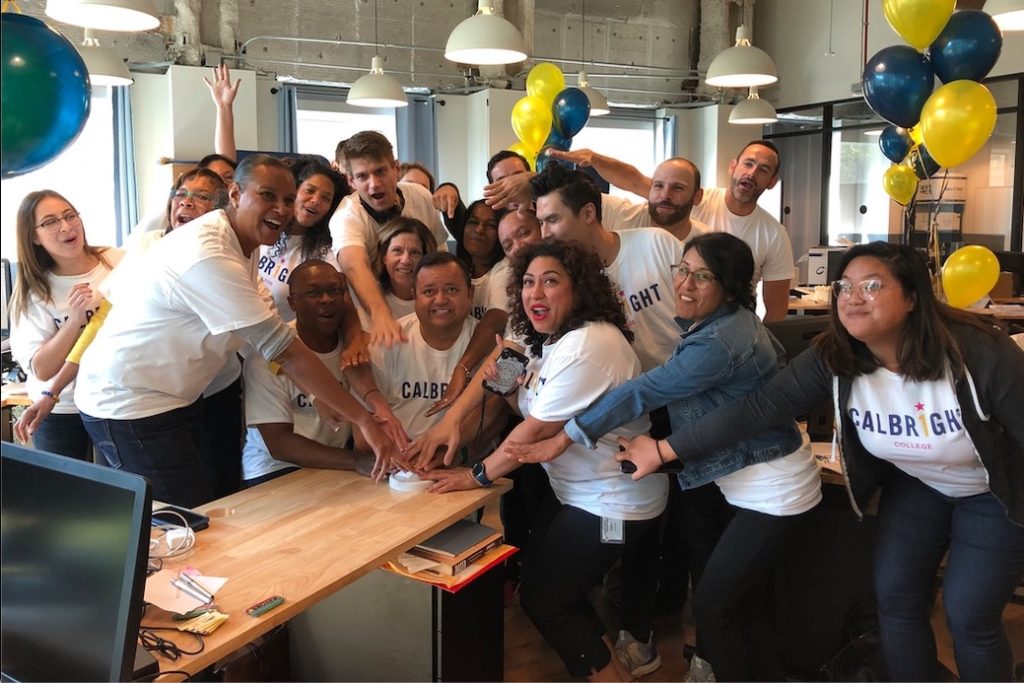 Despite a bumpy start and an abrupt change in its leadership, California’s new online college is on track and moving in the right direction, the chancellor of California’s community college system told state senators Thursday.

“While at times the road has been rocky, I believe Calbright is well on its way to achieving the objectives the Legislature established and that my office expects of them,” Chancellor Eloy Ortiz Oakley told senators at a joint oversight hearing at the State Capitol Thursday.

Calbright College, which began admitting students last fall, is intended to provide online courses to older workers who are already in the workplace, but need additional skills to advance in their careers, and has been in a startup mode since it was approved by the Legislature in 2018. It has also been the target of fierce criticism from several unions representing faculty and other workers at the community colleges.

Four senators — led by Sen. Richard D. Roth, chair of the Senate Budget and Fiscal Review Subcommittee No. 1 on Education, and Sen. Connie M. Leyva, chair of the Senate Education Committee — questioned Oakley and Tom Epstein, who serves as president of both the Calbright board of trustees and the board of California Community Colleges.

Roth said the hearing was called because he and Leyva were not the chairs of the committees when the college was approved by the Legislature, and because the college was entering its second year of implementation.

“We thought we would take an opportunity to explore the foundation for the online community college concept, as well as the status of the rollout and implementation to date,” he said.

Roth asked Oakley and Epstein to explain the need for the college and whether it needed to be a separate entity from other community colleges, whether it duplicated services the other schools already provided and whether it cost too much.

Oakley contended that the courses at the school do not duplicate courses and that the college needs to be a separate entity so that its staff and faculty can focus on serving learners who are already in the workplace. He said the online college would benefit other community colleges by sharing teaching and learning methods.

“This is about adding to the capacity of the California community colleges, not removing capacity,” Oakley said.

The online college, which was championed by former Gov. Jerry Brown, is an effort to improve the workforce prospects of so-called “stranded” Californians who are underemployed, working multiple part-time jobs or in jobs that don’t pay living wages. The target group is adults between 25 and 34. Students work at their own pace and can complete programs in under a year.

Eight weeks before the school opened on Oct. 1 there was still no formal application process for students to enroll or for instructors to teach the new industry-certified programs.

Then college President Heather Hiles abruptly resigned in January, less than a year into a four-year contract that paid her $385,000 annually. The amount of Hiles’ salary has drawn criticism from community college faculty groups and others previously, and it was raised again at the hearing.

Hiles was replaced this week by Ajita Talwalker Menon, a former higher education policy advisor for President Barack Obama and advisor to California’s community college chancellor. She will serve as interim president until a full-time replacement is hired. Her salary is about $285,000.

Faculty groups, including the California Federation of Teachers — representing 30,000 community college employees — have criticized Calbright College from the start, saying it duplicates courses already being offered at the other 114 community colleges and that a large amount of money is being spent on a small number of students. It charges that the college is violating the state’s education law by duplicating programs offered at other local community colleges.

The online community college, which is offered at no charge to students, is getting $100 million in state funds over seven years for startup costs and about $20 million annually for operating costs.

Representatives from various unions representing faculty and other community college workers were among those who lined up for a chance to express their opinion about Calbright College during the public comment period of the hearing.

Sheetz, who teaches a classroom-based community college course that also includes online students, said he is a supporter of online education and understands the value of bringing education to students where it is most needed, but that Calbright is not the right vehicle.

“In a state in which we continually struggle, year after year, to stretch our limited educational dollars among our existing public schools, spending the outrageous amount of money necessary to support a redundant and inefficient program is legislative malpractice and smacks of the very myopic and shortsighted mismanagement for which our government is often maligned,” he said.

Epstein offered an enrollment update Thursday. He said the school now has 510 students. Most of the students are enrolled in “essential skills” classes designed to prepare students for college by helping them improve reading writing and math skills, as well as other skills identified by employers as necessary to career success.

About 38 students are enrolled in the school’s three certificate programs — information technology, medical coding and cybersecurity. The first graduates are expected to complete programs in late spring, Epstein said.

Calbright serves Californians who are not being served by other colleges in the community college system, Oakley said. The school’s program is meant to pair students with paid apprenticeships and then jobs, although the university is still looking for companies to sign on to the apprenticeship program.

“Given how new we are they are observing what we are doing,” Epstein said, adding that there have been multiple meetings with company officials about partnerships.

The school has spent $9 million since its launch. The $15 million for capital outlay has not been spent, Epstein said. An internal audit gave the college a clean bill of health, he added.