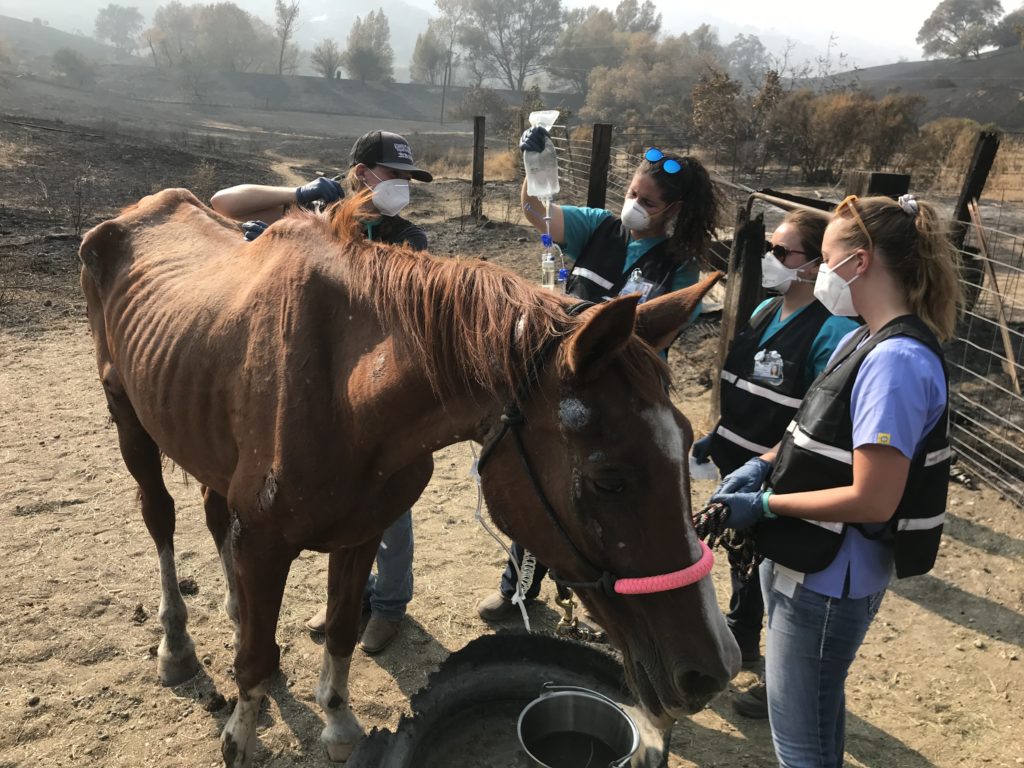 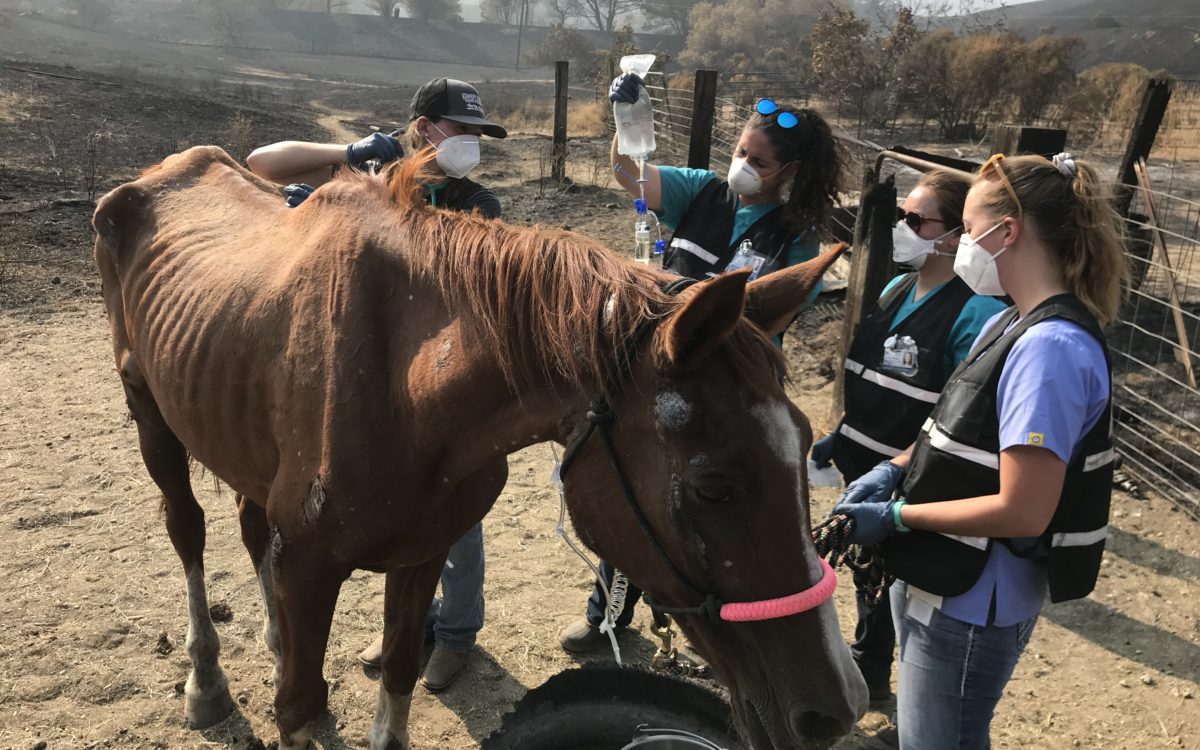 Massive wildfires, which have become an annual event in California, are the first big test of how schools can handle a crisis while distance learning.

Lightning strikes and high temperatures sparked more than 600 wildfires last week, burning through more than 1.4 million acres and prompting the evacuation of 100,000 residents.

In Sonoma County and other counties where there were evacuations, distance learning was canceled in some districts so that students, teachers and their families could get to safety. In many other parts of Northern California, however, distance learning continued even as air quality deteriorated, requiring residents to stay indoors.

Distance learning continued for Sonoma County students attending Sebastopol Union Elementary School District, a two-school district that serves 450 students in transitional kindergarten through 8th grade. But things are far from normal for the students and staff, many who have been evacuated in previous years as fires swirled around the community.

Nervous middle school students, home alone because parents are working, held their cell phones up to their computers during Zoom instruction to show their teachers evacuation alerts that had popped up on their screens. They didn’t know what zone they are in and if they should evacuate.

“Teachers are trying to teach in a crisis and trying to calm students down at the same time,” said Linda Irving, superintendent of the district. Currently, Sebastopol is not in imminent danger and has not been evacuated.

As of Aug. 24 there were 702 school districts and 1,023 charter schools in counties on the state watch list. The districts, enrolling a total of 4.8 million students, are required to have distance learning instead of in-person instruction because their county has a high number of coronavirus infections.

Last year Sebastopol families were evacuated as a precaution in case the Kincade Fire got too close and in 2017 they were evacuated when the Tubbs Fire blew through Santa Rosa, burning everything in its path. In 2019 a flood closed schools.

On Monday the LNU Lightning Complex fire, which has burned more than 350,000 acres in Napa, Sonoma, Solano, Yolo and Lake counties, was about 20 miles from school district offices. Evacuations were taking place about 4 miles from the edge of school boundaries, Irving said.

Teachers are telling students the same thing, she said.

“The smoke triggers anxiety in all of us,” Irving said. “This morning, I sent out a parent communication. I thanked them for their work in distance learning and updated them on child care and food service and reassured them we won’t cancel unless we are evacuated.”

Smoke triggered anxiety in students, many who remember the Camp Fire, which razed most of the town of Paradise less than two years ago.

“We continue to face these unanticipated challenges,” Zevely said. “There is a lot of stress around mental health, well-being and economics.”

Counselors supplied by the county office of education will be checking in with students and teachers this week, Zevely said.

School is postponed indefinitely — both distance learning and in-person instruction — for students at the single-school Pope Valley Union Elementary School District in unincorporated Napa County, said Superintendent Ken Burkhart. The entire school community, except for one teacher, evacuated last Tuesday as the Hennessey Fire, Spanish Fire and Gamble Fires — all part of the LNU Lightning Complex — converged in the Lake Berryessa area. The one teacher who remains lives in Napa, which has not yet evacuated.

“Today was supposed to be our second attempt to start school,” he said, adding that he now expects the first day of school to be delayed by weeks. Burkhart, who lives on the western shore of the lake, said his “entire neighborhood of 85 homes has been saved by some remarkable work by firefighters.”

However, he said he would not be able to return until the power and water are restored. The school has survived so far, he said, noting that the power and internet were working Monday, allowing him to log onto his desktop computer, which he left behind.

Burkhart said his district is the smallest in the county, with the one K-8 elementary school serving about 20 families and 55 students. The nearby Howell Mountain School District in Angwin, which serves about 100 students, has also evacuated.

“The staff and I said ‘We have to get this going,’” Gibson said of the new school year.

The Jones Fire is burning about a mile from the district’s boundary, as the crow flies, Gibson said. Some families have been evacuated.

In 2017, the Lobo Fire burned through the district, razing multiple homes, including one belonging to a principal, she said.

“A fire by itself is stressful enough, but add a pandemic on top of that,” Gibson said.

The district is providing a full-time counselor to students and their families to help them deal with anxiety. The county is not on the state watch list but the district opted to start the school year with distance learning.

“Our fear was the minute we open, you start ping-ponging kids,” Gibson said. “Now you come to school. Now you have to go out.”

In areas outside fire zones, smoke is impacting services to some students.

West Contra Costa Unified, in the east Bay Area, announced Sunday that curbside meal and material pickups for Monday and Tuesday would be postponed.

Though the district is holding classes online this semester, some teachers were using campuses to teach their lessons. But due to the worsening air quality, the district has limited the number of employees each school can have on campus and is not allowing employees to work outside. The district also postponed all athletics indefinitely.

In San Juan Unified School District in Sacramento, meal pickups have been moved inside to multipurpose rooms with a limited number of people allowed in at a given time to provide for physical distancing.

“This allows us to keep staff inside and out of the smoke for extended periods of time,” said Trent Allen, senior director of community relations for the school district. “So far, this hasn’t been a problem or caused people to need to wait outside in a line.”

The district did cancel meal pickups at two of its schools last week because of poor air quality. The air quality this week was better, but still worrisome, Allen said.

California’s colleges are trying to pitch in to help fire evacuees. Some colleges are turning their campuses into evacuation centers for their communities, or at least for their staff and students.

Gov. Gavin Newsom said Monday that he visited an evacuation center at a community college in Santa Cruz County over the weekend, which the Red Cross confirmed was Cabrillo College in Aptos.

Newsom said strict protocols were in place to prevent the spread of Covid-19, including a temperature check and health screening questions, physical distancing and mask requirements, cots at least 10 feet apart, tape on the floor to provide physical distancing in lines and restrooms, and air purifiers.

UC Davis in Yolo County provided shelter for 45 staff members, students and their families who were evacuated from their homes. The evacuees and their 19 pets came from the Davis area, as well as from Santa Cruz and Sonoma counties. One family lost their home and the others had to evacuate, according to a press release. The school’s veterinary school is also offering aid to animals injured in the fires.

Mike Uhlenkamp, spokesman for the CSU system, said agreements to offer dorms for evacuees would be made by individual campuses, so he was not aware of which campuses may have entered into contracts with the state.

Sonoma State University entered into an open-ended agreement with the state’s Office of Emergency Services to begin accepting up to 200 evacuees on Aug. 22, according to its website.

Meanwhile, San Jose State University is providing shelter to about 40 students, including many who are international students who evacuated from UC Santa Cruz, according to the Voices of Monterey Bay. San Jose State has additional space available because many of its students have stayed home while they participate in distance learning.