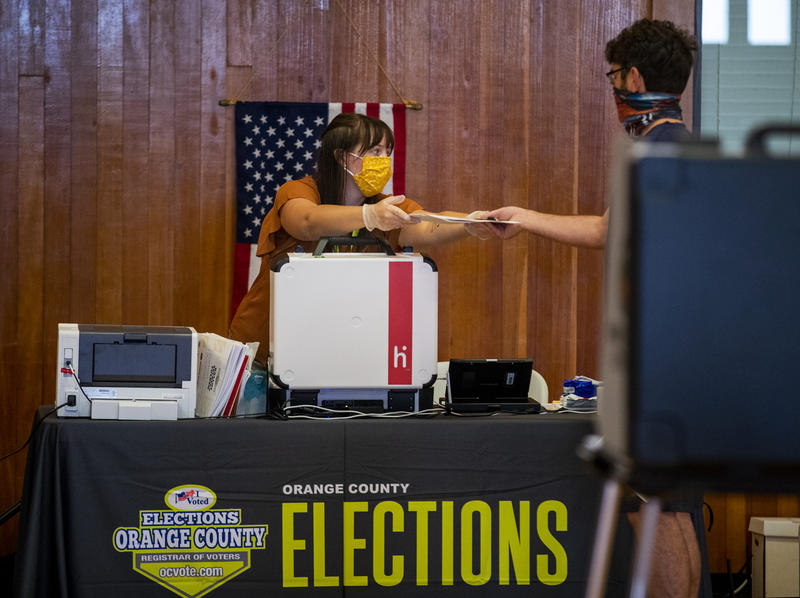 Passage rate is high, but fewer districts put bonds on the presidential ballot this year.

While voters statewide likely defeated Proposition 15, which would raise taxes on commercial property to increase funding for schools, voters in dozens of districts agreed by wide margins to raise their own taxes to support local schools.

A preliminary review of local school initiatives shows that at least 39 out of 60 districts passed school construction bonds and 11 out of 14 approved parcel taxes. The bond measures, which would raise $13 billion for new construction and renovation projects, included $7 billion for Los Angeles Unified, the state’s largest district. It received 78% of the vote; school districts’ general obligation bonds require a 55% majority vote to pass.

Although 4.5 million provisional and mail-in ballots have yet to be counted as of Thursday, the winners include Oakland Unified, with 77% support for a $735 million bond and Pasadena Unified’s $516 million measure, which 62% of voters supported. The four districts whose bonds lost are Maricopa, Wasco Union, Calaveras and the 129-student Dehesa School District in San Diego County, which proposed a $3 million bond.

The 65% passage rate for school bonds this week marks a big turnaround from March, when only about a third of bonds on the ballot — 43 out of 119 — passed. And once all the votes are in, more could pass: 17 bond measures are still too close to call. With at least several million provisional and mail-in votes throughout the state yet to be counted, EdSource is defining “undecided” as vote totals currently falling within 3% above or below the threshold for passing.

Going back over decades of statewide elections, the average rate at which local school bonds pass is 80%, according to Michael Coleman, creator of CaliforniaCityFinance.com, the California Local Government Finance Almanac.

A presidential election, promising a large turnout of Democratic voters who tend to be more supportive of tax measures, usually is a good time to put school taxes and bonds on the ballot. But a pandemic, combined with a sudden and sharp recession with double-digit unemployment in parts of the state, made it dicey.

Rebekah Cearley, legislative advocate for the Coalition for Adequate School Housing, a coalition of school districts and construction companies that lobbies on school construction issues, said the rate of success sent a positive message. “These preliminary outcomes indicate that voters broadly supported their local schools during a challenging time,” she wrote in an email.

And this year, they went to voters without being able to promise there would be matching state aid. In March, voters rejected a $15 billion state bond measure, Proposition 13, that would have provided $9 billion to K-12 districts for new construction and renovations for schools in disrepair, including $1 billion set aside for career-technical facilities and charter schools. Funding projects in districts with low-income families would have been a priority. With Prop. 13’s defeat, the state has run out of matching funding for school construction.

But there’s a flip side to the high passage rate this week, Cearley said. The 60 bonds on local ballots, including three community college district bonds, are one-third of the measures and half the dollar amount that went before voters in the 2016 presidential election. The state’s local measures in this election represent the lowest number of bond measures in 20 years.

Cearley acknowledged that districts were probably “squeamish” about asking voters for money during a recession. She also said that a 2017 law, Assembly Bill 195, has complicated districts’ effort to put school bonds on the ballot and may have contributed to the defeat of some bond measures in March or forced some districts to lower the size of the bonds.

The law requires districts to include information about the rate and duration of a proposed bond measure and the amount anticipated to be raised annually in a 75-word ballot explanation. While “seemingly relevant,” the information confuses voters, Cearley said, because there is not adequate space to put the figures in context. The numbers often fluctuate from year to year.

Parcel taxes, which require a two-thirds majority for passage, are one of the few methods that districts have to increase operating funds. They must be a uniform amount per property. The only measure that lost this week was the smallest, $18 per property for the San Jose-Evergreen Community College District. The vote to renew Palo Alto Unified’s 6-year parcel tax makes it one of the highest in the state — $836 per property.

The $16 million it provides annually is “a huge deal for us” said Superintendent Don Austin. Without it, the district would have had to issue layoff notices next year, he said.

Parcel taxes have always been a coastal California revenue tool, most used in the Bay Area and a few districts around Los Angeles. But historically those districts that proposed a parcel tax had success: The passage rate historically for California parcel taxes is 69%, according to Michael Coleman’s data. Once all votes are in, the rate this week could exceed that. In March, voters approved only 14 of 28 proposals.

Alexander Montero contributed to this article.