California voters, including parents, have deep concerns about distance learning 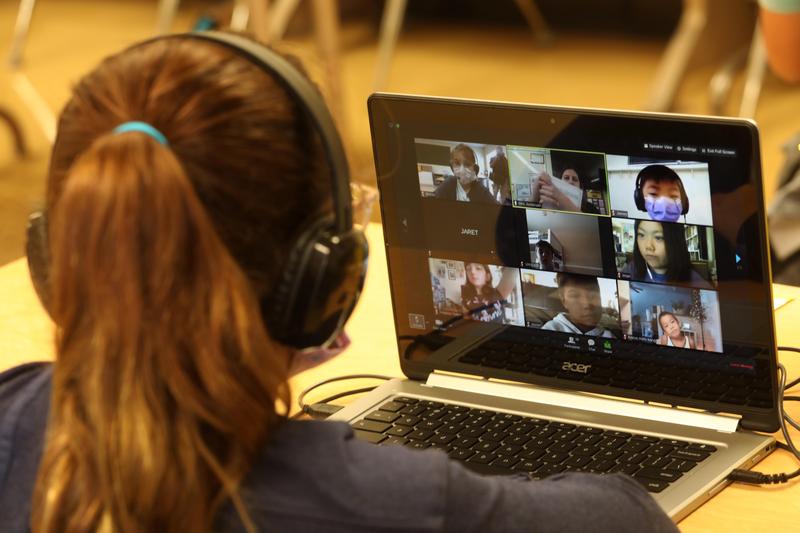 As most public and private school students in California continue to study from home, distance learning gets a definite thumbs down from the state’s registered voters, including parents, according to a new EdSource poll.

A majority of voters as well as parents feel that the state’s schools in general are not prepared to offer high quality distance learning, although they are more positive about their own local schools.

Parents worry that if children are at home for the rest of the year it will result in learning loss for all students, but especially for the most economically vulnerable who suffer from hunger or housing insecurity. Low income parents in particular worry that prolonged distance learning will mean they won’t be able to get back to work.

These are among the key findings of an EdSource survey of 834 registered voters. The representative poll was conducted online between Aug. 29 and Sept. 7 by the FM3 Research polling firm.

The poll was conducted just as distance learning was getting under way, so parents’ views may change as more of them have direct experience with remote instruction for a prolonged period during the coming months.

Distance learning fails our kids, despite excellent teachers trying their best. The kids spend half their time trying to work through technology. And even when the technology works, it’s between hard and impossible for kids to keep up with a schedule of going on and off the Zoom calls. — Katie Balderrama, Los Angeles parochial schools

The quality of distance learning is completely dependent on the teacher’s skill set. Some are fantastic, others struggle. — Caryn Cherry, Irvine Unified

My husband and I are full time high school teachers with three teens (18, 15, 12). We have great connectivity and will be fine. If we had 3 children under 10, I definitely would have taken a leave of absence. — Jennafer Carson, San Mateo Union High School District

Kids aren’t getting the right kind of education they deserve. They need to get back to face-to-face contact, to interact with their teachers, not this face in a computer all day. When will our children get back to some kind of normalcy? — Tammy Perigo, Tulare Joint Union High School District

One major issue that has emerged since the pandemic upended education nationwide is how to motivate children and keep them coming back day after day when they aren’t in the classroom, and don’t have direct contact with teachers. Those concerns are shared by parents, who say the biggest challenge of distance learning is sustaining their children’s interest and motivation to study. Parents also worry about insufficient instructional time with a teacher, and say it is hard for children to work on their own, as well as understand assignments.

Levels of dissatisfaction related to the pandemic run so deep that one in four say they are considering moving their children to a private, parochial or charter school.

Just over half of parents (54%) feel that California schools in general are somewhat or very unprepared to offer distance learning, while 41% said they were prepared. That mirrors exactly the proportion of voters in general who held similar views.

However, parents are slightly more positive than voters in general about the preparedness of their local schools. About half of parents (50%) say they feel their schools are prepared to offer high-quality distance learning, compared with 40% who feel they are unprepared.

Fully 75% of registered voters, including parents, say that distance learning is worse than in class instruction. Only 2% say it is better. 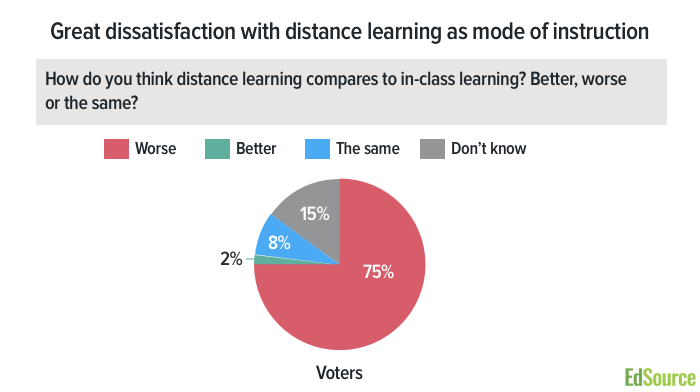 In fact, one third of parents couldn’t cite anything positive about their experience with distance learning in the spring.

When asked to rate what went really well, 7% cite excellent teaching. Another 7% cite having a safe and comfortable environment to access instruction. A similarly small percentage of parents (7%) say teachers and staff staying in close touch with parents was a positive aspect of distance learning. 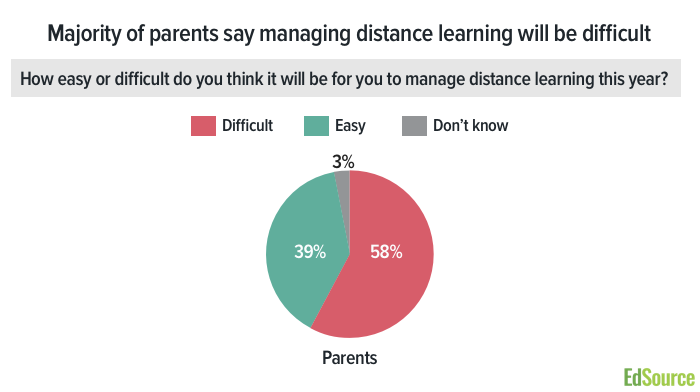 Over 70% worry about learning loss for all or most children, as well as the lack of social interaction with other children. Their greatest concern (80%) is the impact of learning loss on vulnerable children, including those experiencing hunger, homelessness or upheaval at home.

The Biggest Challenge Is ...

Focusing. Many times, my granddaughter come to my room to have a conversation. I ask her, “Are you on break?” and she replies, “No.” — Anita Flemington, Pasadena Unified.

My child is older, so it’s not a matter of “managing” school, but rather holding the attention of a 14-year old who has excelled in school all through high school, and now has little interest in it. — Jennifer Pointer, Capistrano Unified.

Having not met teachers in person my teen sons struggle to ask for help. They feel if teachers could not convey the lesson well by computer, they will not be able to convey it better by computer outside of class time. So our sons’ biggest challenge is self-advocacy, a life skill all students should be developing. — Kristen Brown, San Jose Unified

When asked to identify what they view as the major challenge their child or their family face in adjusting to a distance learning regimen, parents list a series of concerns all related to engaging students and keeping them motivated.

Seventy-nine percent of parents say keeping children motivated and a similar proportion point to sustaining their interest as their biggest challenges. The next biggest challenge (74%) is not getting enough instructional time with their teachers, followed by the difficulty of working on their own. 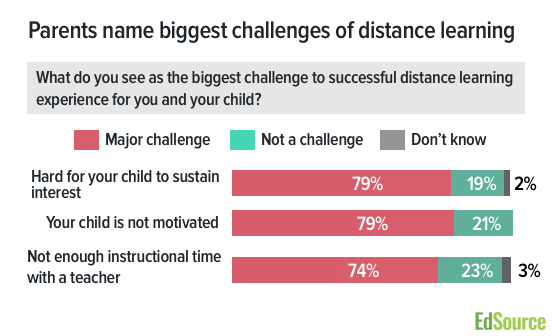 Most have access to broadband and devices, but significant minority don’t.

A major concern in the state and nationally has been to ensure that students have both computers or other devices to access distance learning at home, along with adequate broadband access. There has been a massive push by the state as well as individual districts to provide parents and students with what they need to participate in distance learning.

Strong majorities on the EdSource poll say that unreliable internet access is not a challenge (57%), nor is an inadequate device (69%). However, a substantial number of children still don’t have what they need to fully participate in distance learning. Just over 1 in 10 (11%) say that unreliable internet access is a major challenge, while 31% percent say that it is a minor challenge. Similarly, 11% say inadequate devices is a “major challenge,” compared to 19% who say it is a minor challenge.

Concerns about adequate devices and unreliable internet access are greatest among low and middle income parents. Over half (54%) of parents with incomes under $60,000 cite internet access as a problem, compared with 37% of families with earnings over $150,000.

When asked about strategies they might use to help manage distance learning, for the most part parents seem stumped as to what to do.

Nearly half of parents (43%) say they don’t know of strategies to help their children. However, the most popular affirmative response is to enlist the help of other family members to supervise distance learning.

This video was produced by NBC 7 San Diego, and is published here courtesy of the station.

Only a small proportion of parents (15%) say they would consider forming “learning pods,” also referred to as “pandemic pods.” These are typically small groups of students organized and paid for by parents. These pods can be organized in different ways, but generally children might meet in a socially distanced, safe location, and be supervised by a teacher, a tutor or parents themselves while they are working online. Fifteen percent of parents also say they might hire a tutor or teacher to supplement their child’s distance learning.

One criticism of pods is that they are likely available only to more affluent families, and that they will contribute to widening achievement gaps, which many educators already feared would be exacerbated as a result of distance learning.

Levels of concern vary considerably depending on the income levels of families, however. Concern is greatest among low-income families (67% of families earning between $30,000 and $60,000 annually say they are very or extremely concerned) and is the lowest (45%) among families earning more than $150,000. 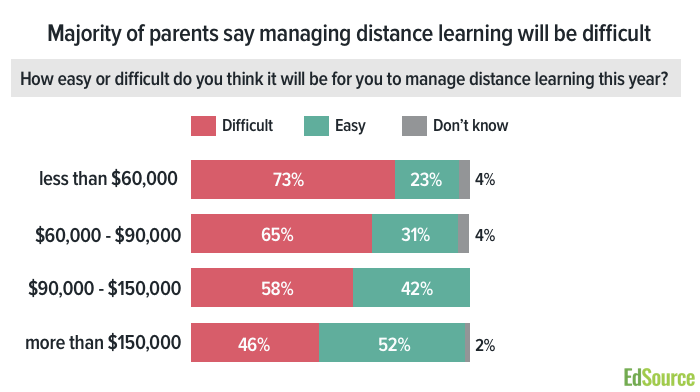 I am considering it. The public schools seem guided by politics. They cannot make decision on what’s best for children because there is a lot of red tape. — Adelina Rodriguez, Walnut Valley Unified

I moved my seventh grader to a charter school which is something I would never have considered prepandemic. He was completely falling under the radar with distance learning. — Caryn Cherry, Irvine Unified

Absolutely not. Though I am worried about the timing for return to the classroom, my son will stay at the public school where he is at. — Bob Capriles, Mountain View-Los Altos Union High School District

Thankfully I don’t have to worry about that because our district offers a choice. We chose virtual learning, and I am glad we did. — Megan Dawkins, Riverside Unified

One in four parents (24%) say they are considering moving their child from public school to a private, parochial or charter school as a result of pandemic related issues.

The backgrounds of parents indicating their desire to change schools varies considerably by political affiliation. Only 8% of Democrats say they are considering moving, compared with 24% of independents and 46% of Republicans.

The sample in the poll included 634 registered voters statewide and an additional 200 voters who are parents or guardians of a child under age 19. The margin of sampling error for the full sample is +/-3.5% at the 95% confidence level, and +/-5.7% for the parent sample.

For reports on other aspects of the poll, the full topline results and a chart pack on key findings, go here.