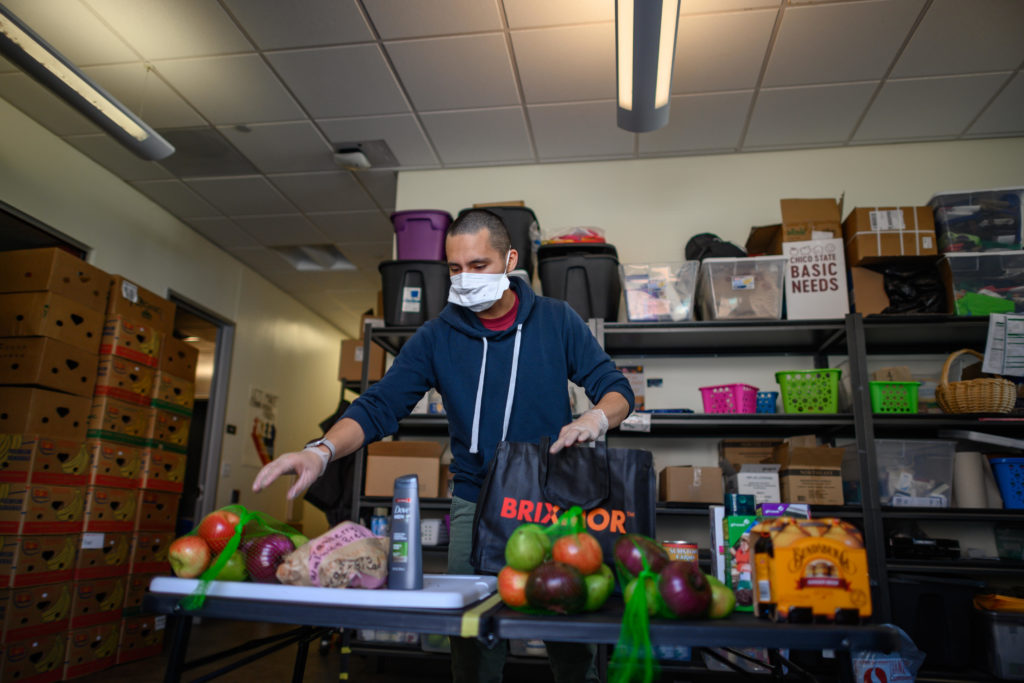 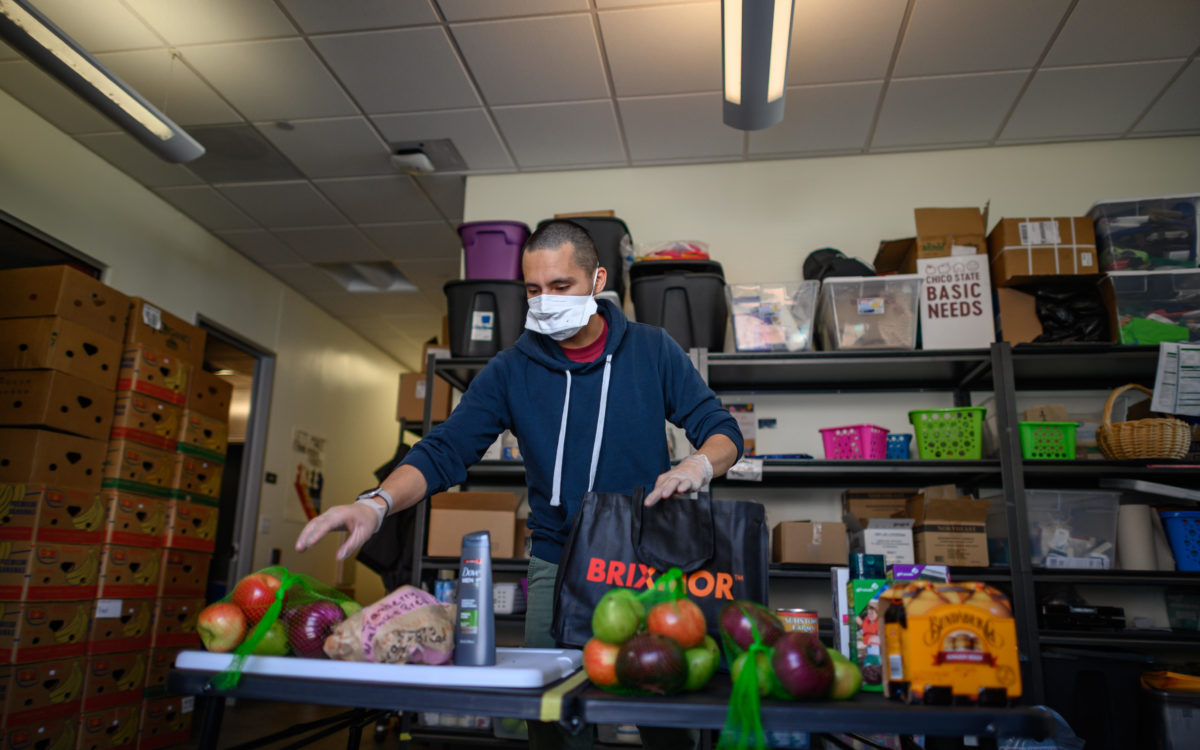 Jason Halley, University Photographer, CSU, Chico
Hector Martinez (center) prepares a bag of food for students from the Hungry Wildcat Food Pantry that remains open Monday through Friday, 11 a.m.–2 p.m. and by appointment as the campus community adjusts to suspension of in-person instruction and a stay-at-home order due to impacts of the coronavirus (COVID-19) pandemic on Friday, April 3, 2020 in Chico, Calif.

Jason Halley, University Photographer, CSU, Chico
Hector Martinez (center) prepares a bag of food for students from the Hungry Wildcat Food Pantry that remains open Monday through Friday, 11 a.m.–2 p.m. and by appointment as the campus community adjusts to suspension of in-person instruction and a stay-at-home order due to impacts of the coronavirus (COVID-19) pandemic on Friday, April 3, 2020 in Chico, Calif.

Thousands of California college students who may have lost their jobs due to the pandemic and are struggling to afford food, broadband service and other living expenses will share in half of the more than $1.7 billion in federal funds going to California public and private colleges. 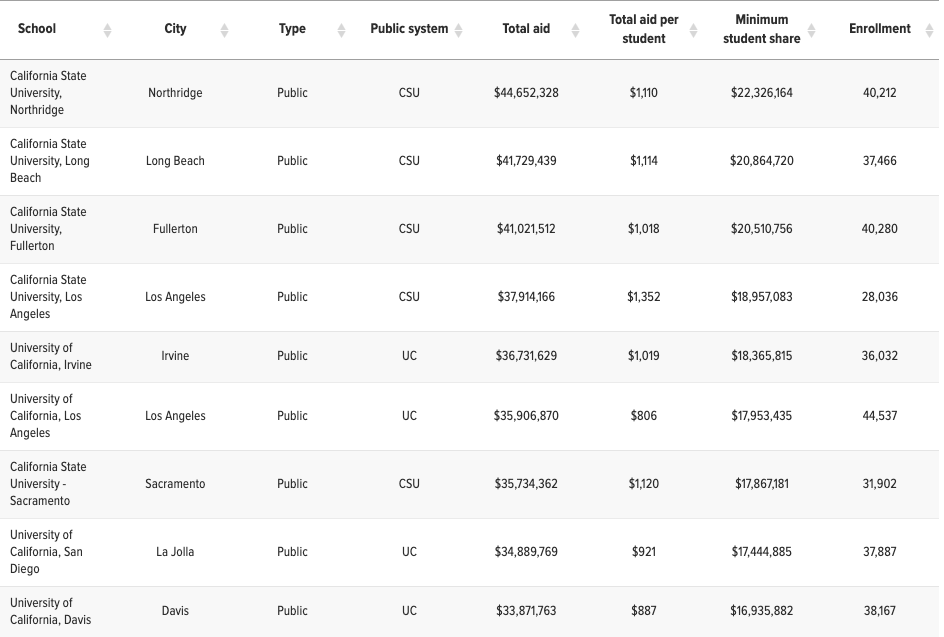 Those dollars could help students like Josh Zupan, a fourth-year art and ecology major at the University of California, Santa Cruz.

Zupan, 22, had an on-campus, facilities and maintenance job making about $300 every two weeks by making repairs in student dorms and housing. But when the coronavirus forced many students to leave campus as classes transitioned online, the student-workers were forced to take mandatory leave, he said.

“I used that money mostly for groceries and utilities and spending on necessities,” he said. “And when I worked over the summer, I could save for the future.” Zupan said he has some savings, but he’s hoping the university will let him go back to work this summer.

The $14 billion in federal funding for higher education was announced earlier this month as part of the $2.2 trillion CARES (Coronavirus Aid, Relief and Economic Security) Act. Each college is required to use those dollars to provide emergency grants and financial assistance to help students with any expenses they need because of the pandemic. Those expenses can include a wide range of costs, such as health care, child care, food, living expenses or laptops.

The U.S. Department of Education is requiring each campus in the country to apply for the money, which they’ll receive directly. But the money may be slow to actually reach students. Each campus determines who can access the funding, and some are developing applications so students can apply for the aid. Fewer than 3,000 of the nearly 5,000 colleges and universities across the country that are eligible to receive the money had applied as of Wednesday, according to the education department. And only 318 colleges had received about $751 million nationally.

Wealthier universities, such as Stanford, which was allocated $7.3 million, declined to receive the relief aid so that smaller colleges and universities across the U.S. could receive more.

“Since half of these funds were to be directly applied to grants for students, we want to reassure our students that we remain fully committed to the financial aid that has been promised them,” according to university.

Stanford, which has a $27.7 billion endowment, would have received about $7.4 million in relief.

They were joined by the University of Pennsylvania, which turned down $9.9 million, Harvard University, $8.7 million, Yale and Princeton universities, $6.9 million and $2.4 million, respectively. Because of their healthy endowments, the universities were pressured to decline the funds. Education Secretary Betsy DeVos praised Stanford’s move and President Trump chided Harvard for having a multi-billion dollar endowment.

For many college students, the emergency aid their campuses will receive may be a possible solution to their financial troubles, including students who may be losing on-campus and summer jobs. One unknown for students is how many students will seek the money and whether there will be enough, especially if they wait too long to apply. But one group that will not benefit are the nation’s nearly half a million undocumented students. The administration ruled this week that they are excluded.

“Our City College of San Francisco students are facing a lot of the same issues that they were before the coronavirus crisis, but now they’re exacerbated,” said Bryan Daley, a CCSF graduating senior who is transferring to UC Berkeley this fall, during a webinar with student leaders from across the state.

Daley, who is a member of Students Making a Change, a student advocacy group, said housing and food insecurity and paying for basic needs like textbooks and internet service were challenges for many community college students before the pandemic began. But now those challenges have worsened, particularly for students who identify as low-income, formerly in the foster care system, formerly incarcerated or undocumented, he said.

Student leaders from across the state sent a joint letter to the UC, CSU and community colleges leadership teams Wednesday offering recommendations for how they could better protect students amid the pandemic, including investing in more emergency grant aid and maintaining on-campus housing and food pantries.

“Every single student in the state is going through a unique experience,” said Michael Wiafe, president of the Cal State Student Association. “Each of the 23 campuses has different resources and infrastructure in place.”

Some students still continue to receive federal work-study dollars despite no longer working, while others who may have held off-campus jobs have been laid off or their work hours reduced. Other students are stuck in off-campus rental agreements they can’t break, Wiafe said. Young Invincibles, a youth advocacy organization, sent a letter to Newsom Tuesday calling on him to allow college students to vacate their leases without financial penalties.

“College students are currently at risk of damaging their credit and financial health for years to come as they struggle to make ends meet during the coronavirus pandemic,” said Kristin McGuire, the western regional director for the organization.

Some colleges are further along than others in determining who will get aid, how much they will get, and how they will receive the money.

During the webinar with student leaders, Lande Ajosa, a higher education advisor for Gov. Gavin Newsom, said it’s difficult for the state to track how many campuses in California have applied for the federal stimulus funding because the money is going directly to each campus and not their system offices.

In a letter to the nation’s college presidents, Education Secretary Betsy DeVos encouraged them to prioritize students with the greatest need, but to consider establishing a maximum funding threshold for each student. The department also released a question-and-answer sheet Tuesday to help colleges understand how they can use all of the stimulus funding they’re receiving and who would qualify.

“California State University, Northridge is developing an expedited, online application process so students can access these critical funds as soon as they can be disbursed,” said Carmen Ramos Chandler, a spokeswoman for the university. “We expect that eligible students will begin receiving funds by early May.”

The university is still determining the eligibility criteria and award amounts, but will consider Cal Grant and Pell Grant eligibility, other eligible financial aid recipients and “students with demonstrated COVID-19-related expenses,” she said.

CSU Northridge will receive $44.6 million, of which at least $22.3 million will go directly to students. The university is receiving the largest allocation in the state for any individual campus and the seventh-largest amount in the country. That’s due to its size and the large number of low-income students who receive Pell Grants. CSU Northridge has nearly 21,000 Pell Grant recipients.

“Our hope is that every student with need will be able to access these emergency funds and continue their progress toward earning degrees,” she said.

The University of Southern California notified students last week about how they could apply for the emergency aid. The university was allocated more than $9.6 million to give to students in emergency stimulus funds. USC is limiting the aid to a maximum of $3,000 per undergraduate student.

Undocumented students are not eligible for federal financial aid like Pell Grants, and so the education department excluded them from the stimulus program. (Most international students also won’t qualify for the aid.)

Undocumented students could apply for $500 in coronavirus relief that the state is offering through the Disaster Relief Fund. The money, however, is capped at $1,000 per household, Ajosa, the governor’s advisor, said.

Although each college’s allocation was determined mostly by their Pell Grant populations, the funding will support more than just those students. Bill Scroggins, president of Mount San Antonio College, a community college in Los Angeles County, said the need for help is greater than the amount of money they’ve received. The college has the largest allocation of the state’s two-year institutions and received about $8.8 million to help students.

“We’re carefully shepherding this emergency money to keep students in school, keep them participating in the educational process and help their families survive the economic downturn,” Scroggins said.

One group of students who won’t be able to receive the emergency aid is the college’s more than 8,000 undocumented students, Scroggins said, adding that they will have to find other ways to help them.

Students at the community college can access the federal stimulus aid by contacting the financial aid office, Scroggins said. The college’s counselors may also direct them to the funding as they contact students daily to help keep them on their educational paths, he said.

“The counselors have been working with students affected by the economic downturn,” he said. “There is just a lot of fear and trepidation. This is a scary time for young men and women and we want to be a source of stability in a time of uncertainty.”

In addition to the funds distributed by the colleges, some students may receive the $1,200 stimulus payments that the new law is most recognizably known for — but only if they live independently and file their federal income taxes as such.

Like many college students across the country, Zupan didn’t qualify for that stimulus money because he is listed as a dependent on his parents’ income taxes.

“I was really excited about the stimulus check but turns out if you’re claimed as a dependent you don’t get it,” he said. “I don’t mind that at all because it helps my parents. But I thought at least they would get the extra $500 because I’m a dependent.”

Zupan said he had hoped to ask his parents for some of the $500, but he lost out there too. The extra $500 in the stimulus check applies only to families with children under age 17.

For many college students, now is usually the time that they’re applying for summer jobs. But with the pandemic bringing the economy to a near halt, the possibility of work once their classes end seems unlikely.

Ravina Soma, a fourth-year Pomona student, lost her on-campus job working as a receptionist of a student dorm as the campus closed and classes moved online. For now, she feels okay, but her savings will be gone in another month or two.

“I’m worried about income,” she said. “Even though it wasn’t an incredible amount of income, it was a couple hundred a month for groceries and anything I need.”