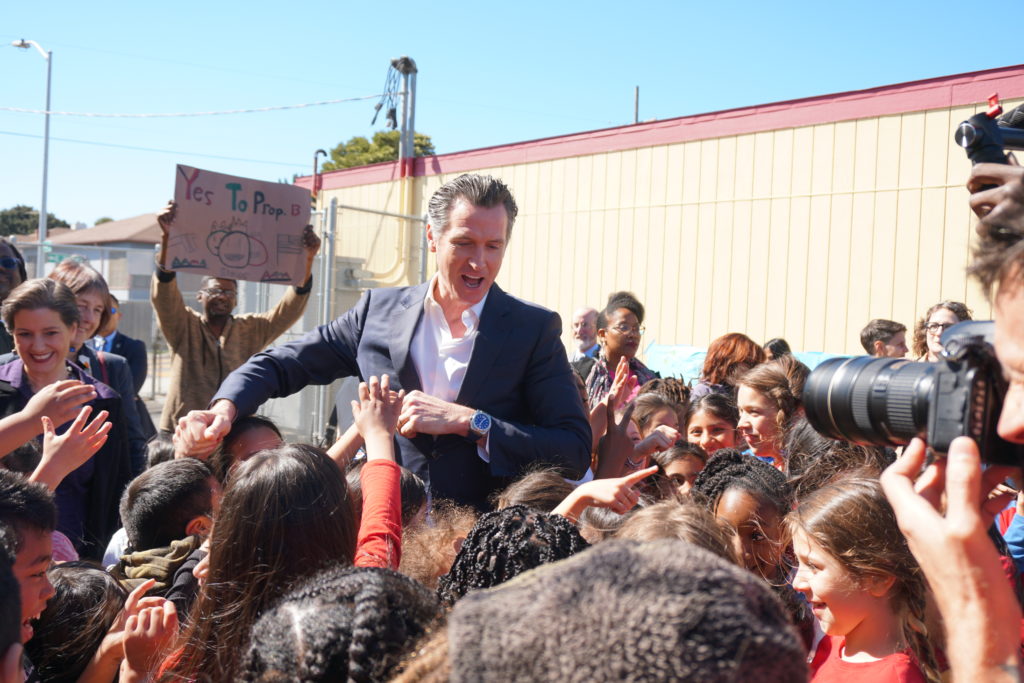 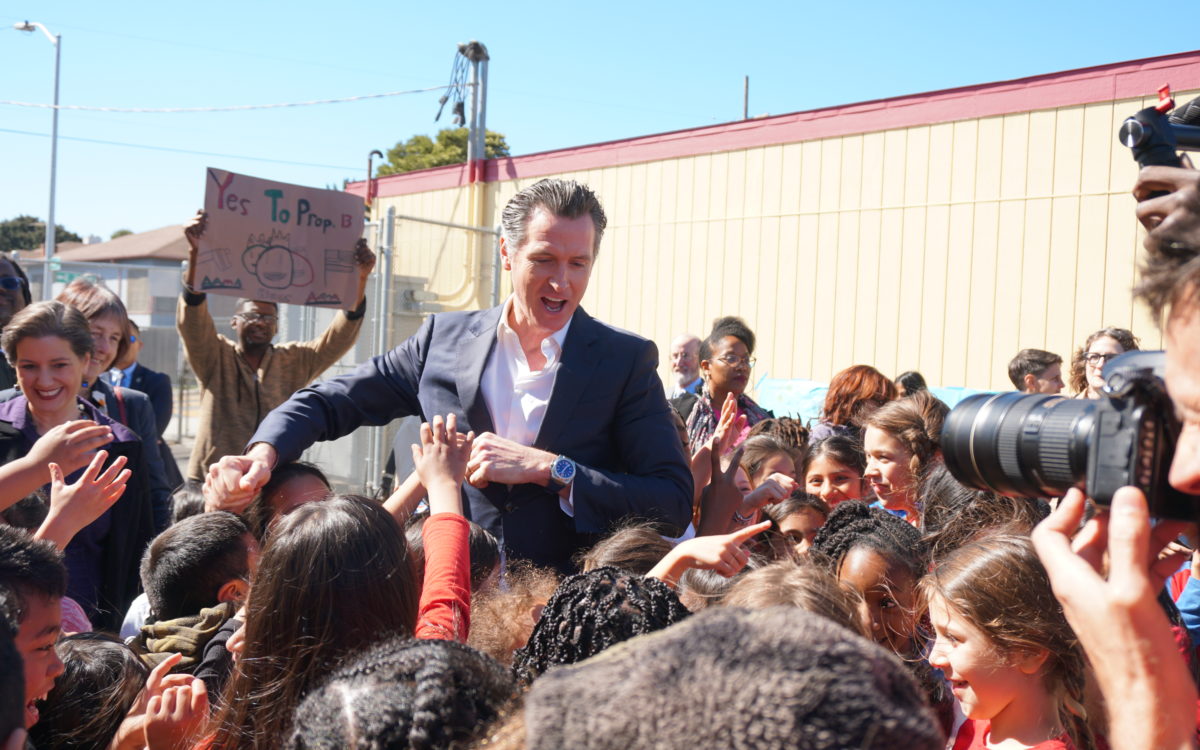 Photo: Ali Tadayon/EdSource
Students of Manzanita Community School in Oakland greet California Gov. Gavin Newsom during a campaign stop for Prop. 13 on Monday, one day before the vote on the state construction bond.

Photo: Ali Tadayon/EdSource
Students of Manzanita Community School in Oakland greet California Gov. Gavin Newsom during a campaign stop for Prop. 13 on Monday, one day before the vote on the state construction bond.

A $15 billion state proposal to fund school and higher education facilities — the largest school construction bond in state history — is losing badly, at least for now.

With 100 percent of precincts reporting, Proposition 13 is behind 46.1 to 53.9 percent, as of the most recent report, on March 10, from the Secretary of State. The margin has closed about 3 percentage points since Election Day. The bond measure  is winning in only 11 of the state’s 58 counties.

Supporters aren’t conceding, and at least one data analyst says that a victory for the bond is possible. It will be at least several days, if not weeks, before the outcome is final. (Update: The California Secretary of State reported that as of March 10, 2.4  million votes remained to be counted, including 678,000 in Los Angeles County and 350,000 in San Diego County.)

“Whether it wins or not, the vote will move only toward the yes,” said Paul Mitchell, vice president of Political Data Inc, a bipartisan data analytics firm in Sacramento.

Mitchell based his calculation on a predicted voter turnout of 50 percent or 10.5 million voters. So far about 7.1 million votes have been counted.

But Mitchell said that late voters tend to be younger and Democratic – especially so in this election, when many Democrats held on to their ballots until the last day.  Many will likely support the bond, he said.

This was the first time since 1994, when separate bonds for higher ed and for K-12 were defeated, that voters appear to have rejected a state construction bond for education.

Proposition 13, the only statewide measure on the primary election ballot, would provide $9 billion for renovations and new construction to K-12 districts on a matching funding basis and $6 billion to underwrite higher education facilities: $2 billion each for community colleges, California State University and the University of California.

The “yes” campaign had big advantages heading to Tuesday: By choosing the presidential primary election, sponsors could count on a disproportionate turnout of Democrats, who traditionally favor more school spending. The campaign had widespread support from political leaders, school and university organizations and statewide business groups, including the California Business Roundtable and the California Chamber of Commerce. The campaign raised about $10 million. Opponents, chiefly the Howard Jarvis Taxpayers Association, spent 1/40th of that — $250,000 on radio ads, said Jon Coupal, the anti-tax group’s president.

But it also faced one confounding liability beyond its control: the number 13, with its association with the best-known Prop. 13, the still-popular tax-cutting measure that voters passed overwhelmingly in 1978. The latest Prop. 13 drew the number by quirk of circumstance: It happened to be the 13th proposition approved by the Secretary of State’s Office since 2018 under a numbering cycle that repeats every decade. Opponents capitalized on the potential confusion by attacking the bond as an effort to raise property taxes. As Kevin Gordon, president of Capitol Advisors Group, an education consulting company and a supporter of the bond, told EdSource back in November, “Confusion is the friend of the ‘no’ vote.”

Coupal said Tuesday night that voters remain worried about rising property taxes and weren’t convinced there was a need for another bond. “We have approved tens of billions of dollars,” he said, “and they are still talking about asbestos in buildings and lead in water.” He said the governor and the Legislature could take “a billion or two” from a projected $6 billion state budget surplus to address the most pressing facilities problems.

Voters last approved a state construction bond four years ago for $7 billion solely for K-12 schools. But that money either has been allocated or committed to approved projects. Since 2002, voters have approved $45 billion in bonds for K-12 and higher education.

Gov. Gavin Newsom’s aides negotiated the language of the bond with the sponsor, Assemblyman Patrick O’Donnell, D-Long Beach, and legislative leaders, adding money for higher ed and changing the distribution formula for the K-12 projects. Instead of handing out the money on a first-come, first-served basis, as under previous bonds, there would be a new set of priorities. Projects to fix health and safety hazards would come first, followed by aid for small districts without the capacity to fund school projects. Work to remove lead from school water would also be a priority. Low-income districts hampered by a small property tax base would also get preference over other districts initially. Those districts would be eligible for slightly more state matching money, too.

Coupal and opponents attacked Prop. 13 as an effort to raise property taxes, which it wouldn’t — at least not directly. The estimated $11 billion interest and the principal would be repaid over 35 years out of the state’s general fund. What it would do is lift the ceiling that limits the amount of debt that a school district could raise on school construction, from the current 1.25 percent of a district’s assessed value to 2 percent for elementary school districts. For unified and community college districts, it would go from 2.5 percent of a district’s assessed value to 4 percent. So it could potentially raise the limit on property taxes for school bonds, but only if local voters approved their districts’ construction measures.

O’Donnell and other advocates for the bond did not include a higher debt limit in their proposal; Newsom’s aides added this feature in the final negotiations.

“Bond backers underestimated the importance of saying clearly and emphatically that the state bond would not raise property taxes,” Gordon said Tuesday night. “The provision raising the debt ceiling clouded the issue and gave opponents an opening.”

The Newsom administration was involved in the campaign for the bond, and Newsom appeared at various schools throughout the state over the past week, including a stop on Monday at Oakland Unified’s Manzanita Community School. The school could be eligible for $2.8 million in state funds under the bond if the district provides $1.8 million in matching funds. Like other schools in Oakland, Manzanita lacks air conditioning, and teachers Newsom spoke with complained that temperatures in their schools could reach 100 degrees and hotter.

School districts and five community college districts appeared ready to take advantage of state money if the bond had passed. They placed 122 facility bond measures on Tuesday’s ballot, according to Michael Coleman, who monitors local elections for CaliforniaCityFinance.com. If all were approved, they would fund $17.4 billion for construction projects. They ranged from the $1.7 million bond request by the Waukena Joint Union School District in Tulare County to $900 million that Morgan Hill Unified, south of San Jose, is seeking.

The UC and CSU systems administer their own construction projects. Prop. 13 would provide the first general obligation bond for them since 2006 and would require that they prioritize buildings with fire and safety issues, and seismic retrofits. The CSU trustees and the UC regents would have to adopt 5-year plans to expand affordable housing on campus. UC administrators have identified more than $11.8 billion in unfunded capital needs across the 10-campus system.