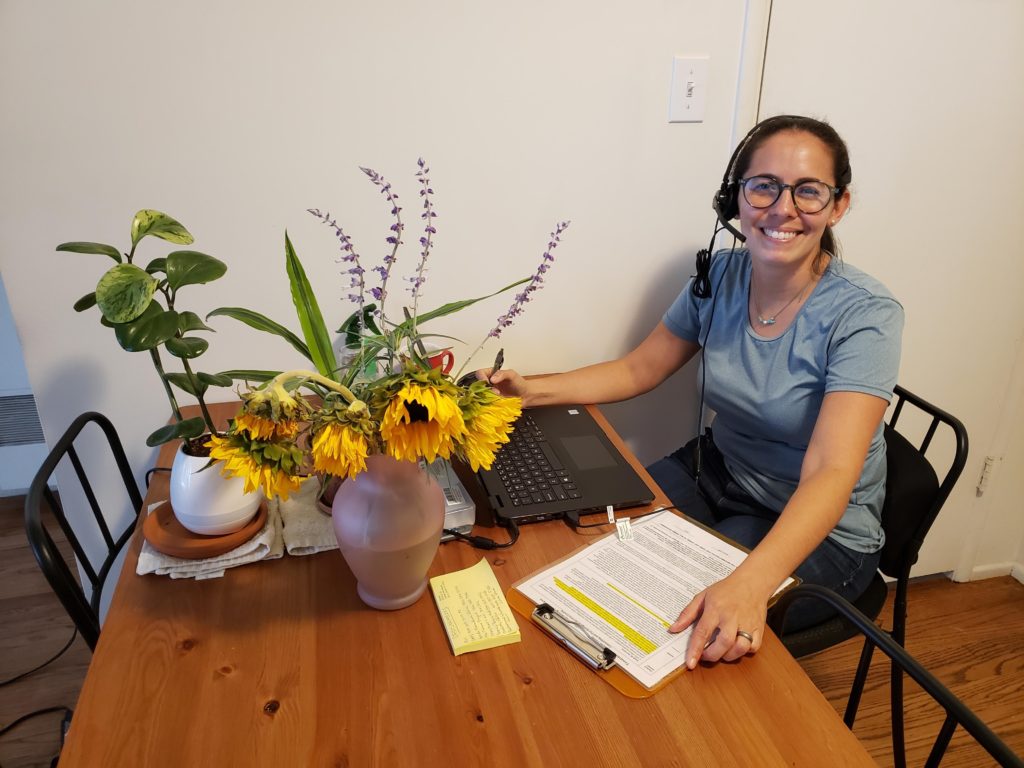 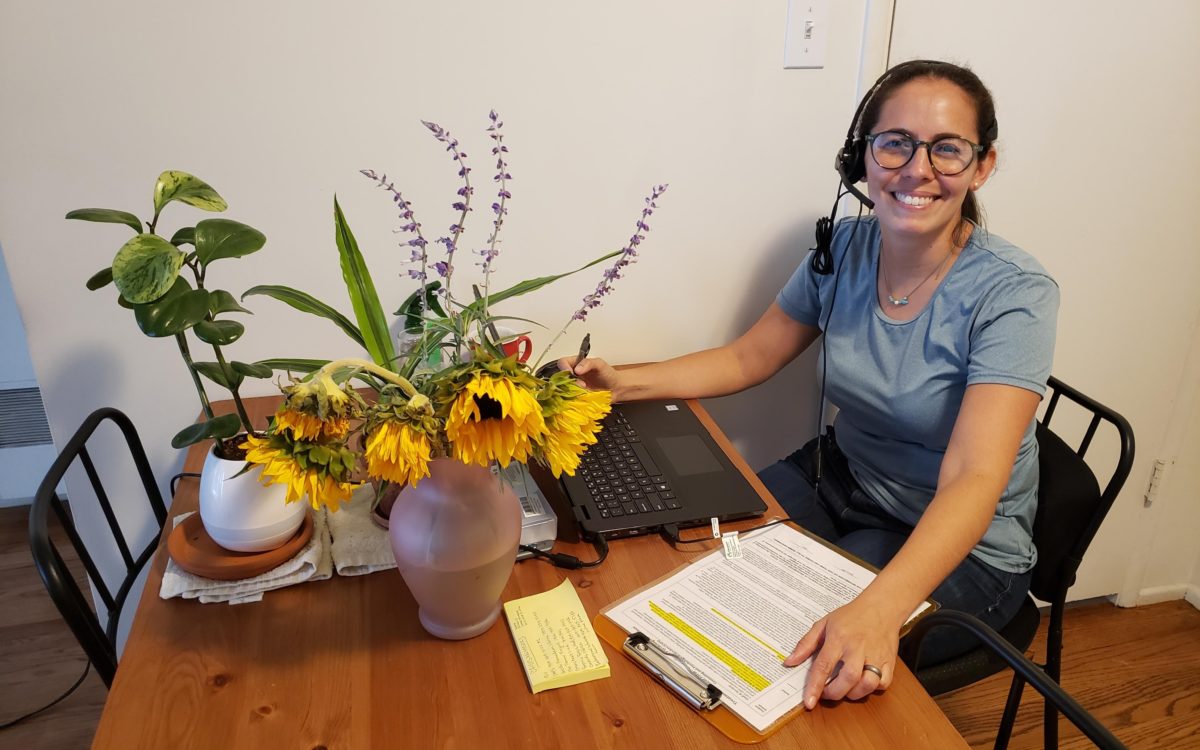 Photo: Cal Poly Pomona
Maria Gisela Sanchez-Cobo, a therapist at Cal Poly Pomona, prepares to start a teletherapy session from her home with a student.

Photo: Cal Poly Pomona
Maria Gisela Sanchez-Cobo, a therapist at Cal Poly Pomona, prepares to start a teletherapy session from her home with a student.

With surveys showing that the pandemic is worsening anxiety and depression among college students, campus counseling centers across California are bracing for an expected sharp rise in the numbers of students seeking mental health services.

Like most college and university classes, psychological therapy sessions switched to online — or on telephone — in March. The campuses say they will try their best to advertise, expand and improve those virtual services and continue that way until it is safe to restore in-person meetings.

Santa Monica College student Camille Horrigan-Slajus said she has had good experiences with online therapy but is worried about other students around the state possibly facing long waiting lists for appointments. Some students, she added, don’t have reliable Wi-Fi or good enough laptops even though some needy students received hotspots and computers from the school.

“With all the students who want help, I don’t believe there will be enough resources to give to them,” said Horrigan-Slajus, who is president of her college chapter of Active Minds, a national organization that promotes mental health for young people.

The need for colleges to increase their mental health services during the pandemic surfaced in a survey of 46,000 university students nationwide from May to June; it found a third of students showed major depressive or anxiety disorders and that those rates appear to be significantly up from last year. Especially increased emotional distress was shown among students who did not adapt well to remote instruction. Those results “are alarming,” said Igor Chirikov, director of the Student Experience in the Research University Consortium (SERU), a UC Berkeley-based group that conducted the study.

RESOURCES YOU CAN USE

Universities should be prepared for increases in students’ requests for mental health services or otherwise see more students at risk of failing classes and dropping out of school, added Chirikov, who is also a senior researcher at UC Berkeley’s Center for Studies in Higher Education.

Colleges are increasing workshops to reduce loneliness and stress and are expanding crisis hotlines to around-the-clock. Some schools have lifted limits on the number of one-on-one therapy sessions, which are usually offered at no extra charge after students pay required health fees.

But questions remain about whether colleges are prepared enough and whether students will even know that virtual therapy via Zoom is available or be able and willing to use them. Some activists also worry that waiting times to start non-emergency appointments will stretch far beyond what already can be two weeks. And everyone fears possible budget cuts if state support and enrollments decline.

Nance Roy, the chief clinical officer for the Jed Foundation, an organization that works to prevent suicides among teens and young adults, said that college mental health services could get partly lost in all the efforts to shift classes online and keep whoever remains on campus physically healthy.

“Many, many students are going to need (psychological) support. How college are going to manage that is still undetermined,” said Roy, who is an assistant clinical psychiatry professor at Yale University.

Right after campuses shut down in the spring, many campuses reported a significant drop in the number of students reaching out for psychological help. Experts say some students at first resisted online therapy. Many others were too busy moving out of dorms, adjusting to online classes and trying to survive financially when jobs disappeared. Mental health initially took a back seat, until emotional tolls mounted, experts said.

At UC Santa Cruz, for example, the number of mental health counseling sessions dropped by about 21% in the spring quarter compared to last year, according to Gary Dunn, the campus’ interim associate vice-chancellor for student health and wellness. Many students coped reasonably well at first with what Dunn described as the most stressful situation current college students have experienced as a group.

However, the numbers for the summer were significantly higher than last year, in part, because prior limits on the numbers of sessions were relaxed, Dunn said. Now he expects demand to keep rising this fall as the depth and duration of pandemic disruptions and nearby wildfire dangers take hold.

“We will certainly do the best we can. We are ready to see students and do whatever we can to meet their needs,” he said.

A major concern, he and other mental health professionals say, is that students in distress will be harder to spot and offer help to. With online classes, professors may be unable to pick up clues such as weight loss or absence. With most dorms closed, resident assistants can’t drop in on students who are not leaving their rooms or are abusing alcohol and drugs. Experts urge faculty to embed lists of mental health resources in their syllabi, to raise the topic, no matter what the class is about, and to develop assignments with some group work to combat students’ isolation.

Another issue is that the students who returned to live with their families may lack the privacy to participate in online therapy sessions and some may lack reliable Wi-Fi service and computers altogether. So many campuses say they will offer telephone discussions — and possibly silent texting — that could take place in students’ cars or while they take a walk away from home.

“I think it’s kind of a tough situation. There is more demand but since students are at home, it is harder for them to seek the help,” said student L. Adriana La Fuente, who until recently was president of Cerritos College’s chapter of Active Minds. In recent weeks, she participated in the college’s newly offered online workshops on relaxation and calming anxieties, part of an effort to compensate for the temporary end of face-to-face therapy.

At Cerritos, a community college in Norwalk, college psychologist Humberto Hernandez said he expects an upsurge in demand for campus mental health services this fall as students get more comfortable with the technology and feel isolation worsening. He said his center is working “to be able to meet the students’ needs as best we can. I know the need is out there, that’s pretty clear. Everybody is feeling the pressures of this pandemic in different ways.”

“We are in completely unknown territory here”
—Ben Locke, executive director of the Center for Collegiate Mental Health

The campus’ crisis phone line has been expanded to around the clock, seven days a week from just evenings and weekends, in connection with ProtoCall, a national organization that contracts with hundreds of schools to help handle emergency mental health calls. Like many other schools, the campus also promotes other emergency services and suicide prevention hotlines available to students and the public.

In switching to online mental health care, colleges had to adopt zoom versions and virtual platforms that provided special privacy protection. Another issue arose quickly: serving students who moved home to states that did not recognize licenses of California’s therapists and psychologists. In some cases, those states issued waivers so college-provided therapy could continue. But in other cases, college-based therapy had to end and students have had to be referred to community clinics near their homes or to their family’s health insurance if possible.

A survey of 18,700 students by the American College Health Association and Healthy Minds Network in the spring found that 60% think the pandemic makes it more difficult to access mental health care. Forty-one percent reported experiencing depression, up from 36% last year. Interestingly, binge drinking and use of illegal drugs dropped somewhat, likely because more collegians are living with parents, not in dorms.

Cal Poly Pomona is starting online discussion groups “as a place where students can talk about what they are experiencing and a place to connect with others, given they are at home and really missing the social aspect of their lives,” said Nancy Robles, director of counseling and psychological services. Her campus this fall is adding more counselors and starting more online discussion groups and workshops on such topics as dealing with adversity and stress, she said.

At Pasadena City College, lead psychologist Jason Vasquez also said he expects more students to look for more support to deal with loneliness, relationships and fears about health and finances.

“My hope is that people who need help are going to seek help. That’s what we are preparing for, whether with individual or group services,” Vasquez said. Recently formed online discussion groups focused on, among other things, the job market and on undocumented students’ concerns.

The prospects for the fall remain uncertain nationwide, according to Ben Locke, executive director of the Center for Collegiate Mental Health, a national research group headquartered at Penn State. “We are in completely unknown territory here,” he said. Colleges want to expand their services to meet possible higher demand, but at the same time the pandemic has badly hurt some schools’ overall budgets, Locke said.

Behind statistics is the deeper questions of whether online counseling is effective and appealing to students.

Ronald Lutz, Director of Counseling and Psychological Services at Sacramento State, said some non-verbal cues might be lost in online sessions and that the formality of office face-to-face sessions might be more productive than virtual sessions with students “in their bedrooms in their pajamas.” But overall, he said virtual therapy can be very effective. “It may not be ideal for every client, but for the majority of clients, it provides a good service,” he said.