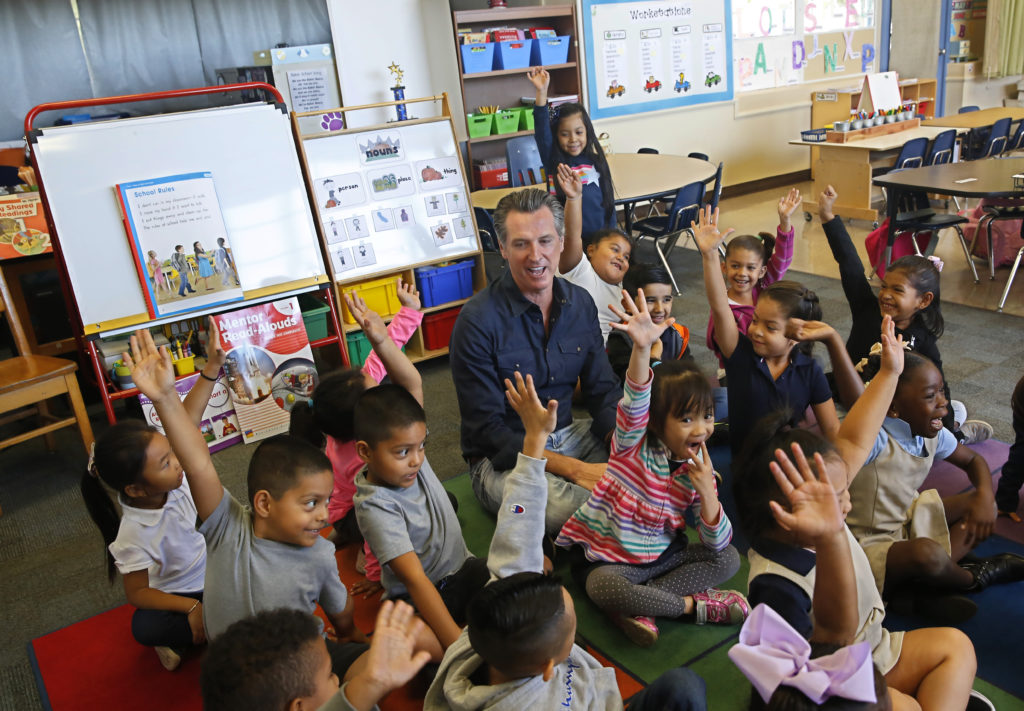 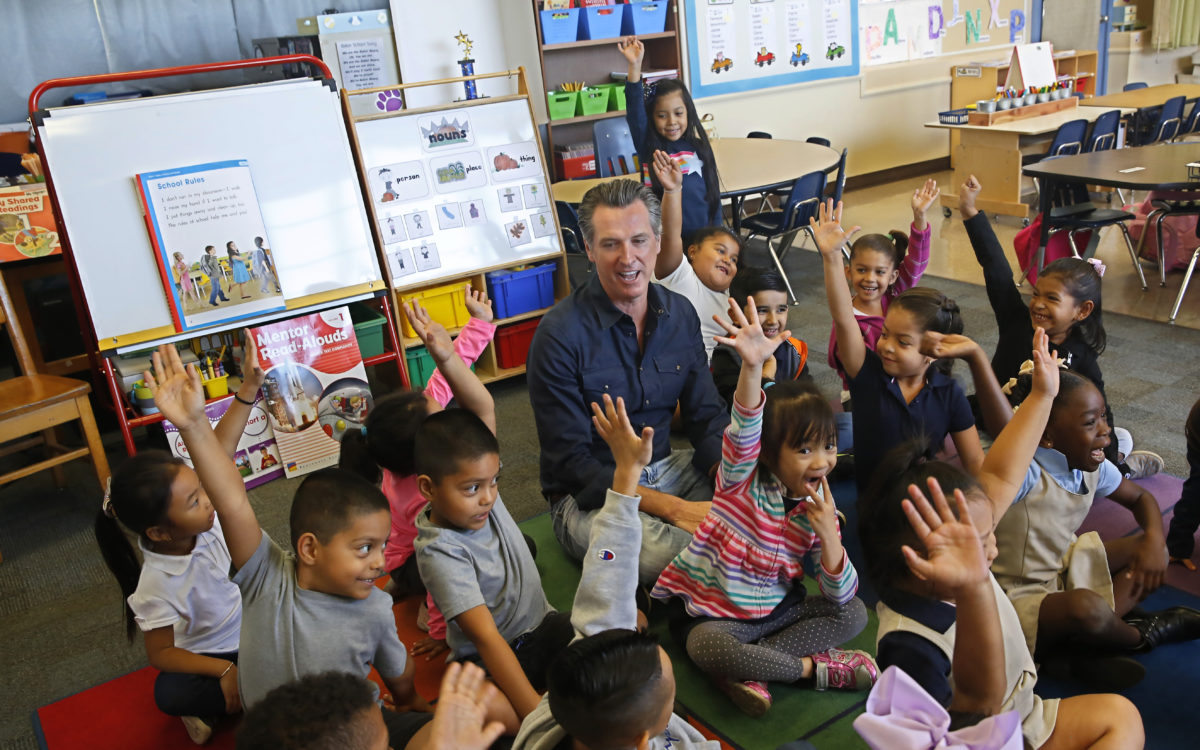 Photo: AP Photo/Rich Pedroncelli
Gov. Gavin Newsom takes questions from kindergarten students during his visit to the Ethel I. Baker Elementary School in Sacramento on Oct. 7, 2019.

Photo: AP Photo/Rich Pedroncelli
Gov. Gavin Newsom takes questions from kindergarten students during his visit to the Ethel I. Baker Elementary School in Sacramento on Oct. 7, 2019.

As he was campaigning for governor, Gavin Newsom made some enormous promises for the youngest Californians and their families — universal preschool, affordable, high-quality child care, six months of paid family leave. And he’s delivered — on the first few steps.

Once he took office in January 2019, Newsom moved forward significantly on many of his big early education campaign promises. With the help of the Legislature, he expanded family leave from six weeks to eight weeks, with a promise to extend it further later this year. He increased home nurse visits for infants and toddlers and medical screenings to catch developmental delays and trauma early. He invested in grants to build more child care centers and help train more early childhood educators.

The 2019-20 budget will allow about 31,600 more low-income children to enroll in state-subsidized child care centers and preschools. And as of Jan. 1, all 4-year-olds living in low-income neighborhoods are eligible to attend state-subsidized preschool, regardless of their own family’s incomes, an effort that attempts to reach children from middle-income families who make too much money to qualify for subsidized preschool but cannot afford a private preschool.

Perhaps most importantly, Newsom invested in planning. He appointed a team of researchers and experts that has already begun meeting to come up with a Master Plan for Early Learning and Care, which is meant to be a guide for improving the quality of and access to child care. It will also address how to fulfill another of his campaign promises — universal pre-K, making state-subsidized preschool or transitional kindergarten available to all 4-year-olds, regardless of income.

Newsom’s total spending for child care and preschool during his first year in office is an unprecedented $5.5 billion. That’s not nearly enough to provide affordable, quality education for all the young children who need it. California has more young children than any other state, and more than half of them are low-income. In addition, years of cuts and lack of investment in early education has left the state lagging behind others in quality of care and access. Hundreds of thousands of children are still not enrolled in subsidized early education programs, even though they meet the income requirement — currently $80,623 or less for a family of four.

For parents of young children and some advocates, the wait for widely available and affordable high-quality child care or preschool can be frustrating. But experts say it’s smart to proceed slowly. Early childhood researchers and advocates largely applaud Newsom’s efforts in 2019 and say the steps he took will lay the groundwork needed for building a more comprehensive early education system.

“Even in other, much smaller states, this has been a multi-year process. In California, it’s complex and large, so I think it’s right to take the time to get everyone on board, and to make sure the decisions that are made are informed by research,” said Hanna Melnick, research analyst and policy adviser at the Learning Policy Institute, a nonprofit research organization based in Palo Alto.

“I think the governor is right to think about this holistically,” said Stanford University professor Deborah Stipek, whose research focuses on early education. “You could double the number of slots that the state would pay for, but you wouldn’t double the number of children that were in those slots, because the programs wouldn’t be able to find staff.” Stipek is part of the team working on the master plan.

The early childhood workforce is one area where some experts believe Newsom and the Legislature have fallen short. Several bills introduced in the Legislature in 2019 to address wages and training for preschool teachers, aides and other child care providers stalled and never became law. The exception was a law passed that allows child care providers to unionize and collectively bargain for better conditions.

“The jobs for educators have not been propped up to deliver on the promise of high quality education,” said Lea Austin, director of the Center for the Study of Child Care Employment based at UC Berkeley. “If you’re working full-time caring for and educating children on a daily basis, you should be able to provide for your own family. And that’s not the case in California. And it’s particularly not the case for educators of color in California.”

The Center for the Study of Child Care Employment recently published a study that found that African-American and Latina early educators earn less than their white counterparts.

The 2019-20 budget set aside funding for training, but Austin said providing more education will not automatically increase early childhood educators’ wages. About a third of teachers at California child care centers and preschools already have a bachelor’s degree, and another third already have an associate’s degree, according to a separate study by the center.

“Simply saying that if people have higher education, it will drive the wages, hasn’t worked. It hasn’t worked in California, or in other states,” Austin said.

Austin said Newsom and legislators should consider implementing policies such as those implemented by other states, including Oklahoma, New Jersey, North Carolina and New York City, among others, that require public preschool teachers to be paid or receive benefits on the same scale as elementary school teachers.

Some advocates are also pushing for Newsom and the Legislature to consider more funding for programs serving children who speak a language other than English at home and those who experience trauma, such as living in communities ravaged by wildfire or gun violence. Such a system would be similar to the state’s K-12 funding formula, which provides more dollars to school districts serving large numbers of English Learners, foster children, homeless children and low-income children.

“When Gov. Newsom ran for office, he talked about a California for all,” said Karla Pleitéz Howell, managing director of policies and programs for the nonprofit organization Advancement Project California, a civil rights organization that advocates for equal opportunities in education. “All means all. Yet when we look at the data, and the opportunities that exist, we consistently find that our youngest black, Latinx and Native American children and families are the most likely to face community conditions that really shut down the opportunities for high quality early learning experiences.”

Currently, California reimburses child care centers and family child care homes for each low-income child approved for a subsidy. The state also has temporary subsidies specifically for foster children and some funding for training child care providers to teach children who speak a language other than English at home, or who are in foster care. In addition, the state has grant programs to help build child care centers and to train early childhood educators.

Pleitéz Howell said the Master Plan for Early Learning and Care is a chance to reconsider how the funding for various programs is distributed.