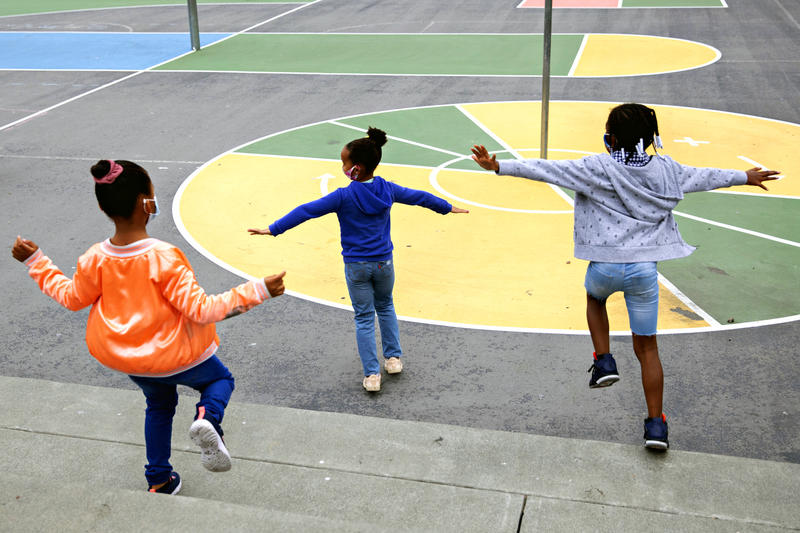 Schools emerged as a key issue on the presidential campaign trail — but not in the way anyone could have predicted a year ago.

President Trump made the question of schools reopening for face-to-face instruction during the pandemic a key campaign issue. Over the past several months, he has argued, without any basis, that Democrats want to keep schools closed “for political reasons,” to use against him as an election issue. He even threatened to “cut off” aid to schools that don’t open, even though he couldn’t do that without congressional approval.

He continued to opine on the issue until the very end of the campaign. On Sunday in a speech in North Carolina, for example, he said schools should reopen because young people have healthy immune systems. As proof, he pointed to Barron, his 14-year-old son, who tested positive for the virus and recovered.

But what has been shunted aside are what the candidates promised should they be elected president. Beyond the impact of the pandemic on schools, there has been virtually no discussion on the campaign trail about substantive education issues. They were barely mentioned in the two debates between the candidates.

That may be understandable given that education systems at all levels have been completely upended by the pandemic, making discussion of long-term reforms more difficult, if not impossible. However, the neglect has obscured the fact that former Vice President Joe Biden is offering one of the most detailed education platforms of any candidate in memory — perhaps even the most detailed.

Certainly, education has figured prominently in most recent presidential campaigns. When he ran in 1988, George H.W. Bush aspired to be an “education president.” Bill Clinton was also closely identified with major education reforms at the time he ran for president. In his 2000 campaign, George W. Bush visited 100 schools, talking repeatedly about the “bigotry of low expectations,” while Al Gore’s platform envisaged an expansive federal role in education.

In Trump’s case, he is promising very little — and almost nothing beyond his 2016 “school choice” education platform, this time with even fewer details.

In fact, his second term agenda contains just two items, reprinted in full here. Both were offered without any explanation:

His school choice agenda, and that of his Education Secretary Betsy DeVos, is by now well-known — and one that Trump made no significant headway in promoting during his four years in office. He has backed a range of plans that in some form or another attempt to funnel federal funds to underwrite tuition at private or religious schools, as well as support charter schools.

As for “American exceptionalism,” the issue is a relatively new one for Trump, and appears to be a reaction to Republican derision about efforts to view U.S. history in a new light, along with a drive to rename schools and remove monuments that honor historical figures associated in some way with racist practices and views.

Harshly criticized by conservatives is the New York Times’ 1619 Project, which argues for tracing the beginning of the nation to the arrival of the first slaves to the United States. It has now been turned into a school curriculum that can be taught in classrooms.

The conservative Heritage Foundation has been leading the effort to come up with a curriculum devoted to “American exceptionalism,” as an antidote to what it believes is taught today in U.S. schools.

“Young people lose heart early on,” the foundation wrote in promoting a webinar on the topic in March. “Trapped in government-run schools, they learn that America is a nation of imperialism, greed and racism. Rarely do they hear the truth: that America is the freest, most prosperous nation on Earth — the only nation founded on the concept of human liberty.”

Biden, by contrast, has outlined an extraordinarily lengthy, and pro-teacher, education platform. The fact that Jill Biden, his wife, is a former high school teacher and community college instructor has no doubt helped inform his views on education.

What received some attention during the early part of his campaign was his proposal to dramatically increase federal funds for schools, including tripling Title 1 funds for schools serving large numbers of low-income students.

But he has made a myriad other proposals since then, including:

Of course, it is unclear how Biden would translate this wish list into actual programs, especially if the Senate remains in Republican hands. Often, his pledges are stated as if he could make good on them on his own, without Congress.

In almost every case, he could not — something that Biden, who was in the Senate for nearly six terms, obviously knows better than most.

The fact that his proposals got so little attention during the campaign reflects the extent to which this race became one almost exclusively about Donald Trump, and the lost opportunity to discuss issues that affect every American.

One positive outcome of the pandemic is that it has dramatically affirmed the importance of teachers and schools in general, not only for children’s education, but for their overall physical and mental health. It has also underscored that many parents are not cut out to be teachers, and that schools are essential not only for the economic and emotional well-being of students, but of their parents as well.

That affirmation of the central role of schooling will be something to build on in the coming months. But anyone who cares about the central importance of education in shaping the nation’s future will have the opportunity to hold Biden to the pledges he has made — depending of course on what happens on Nov. 3.