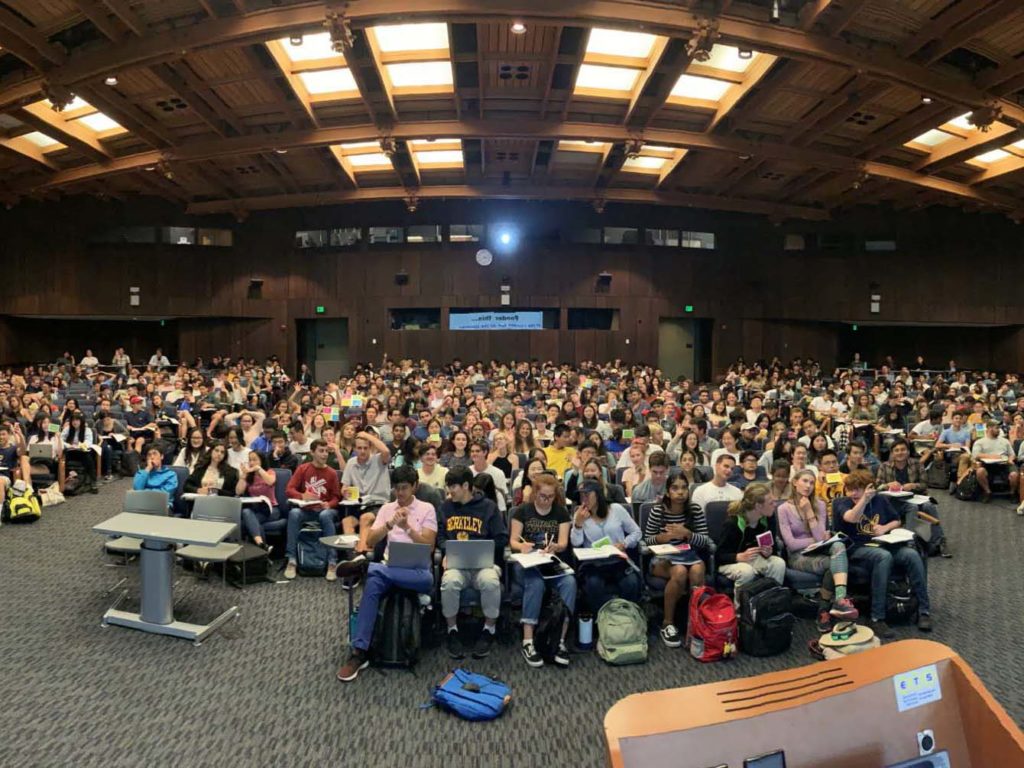 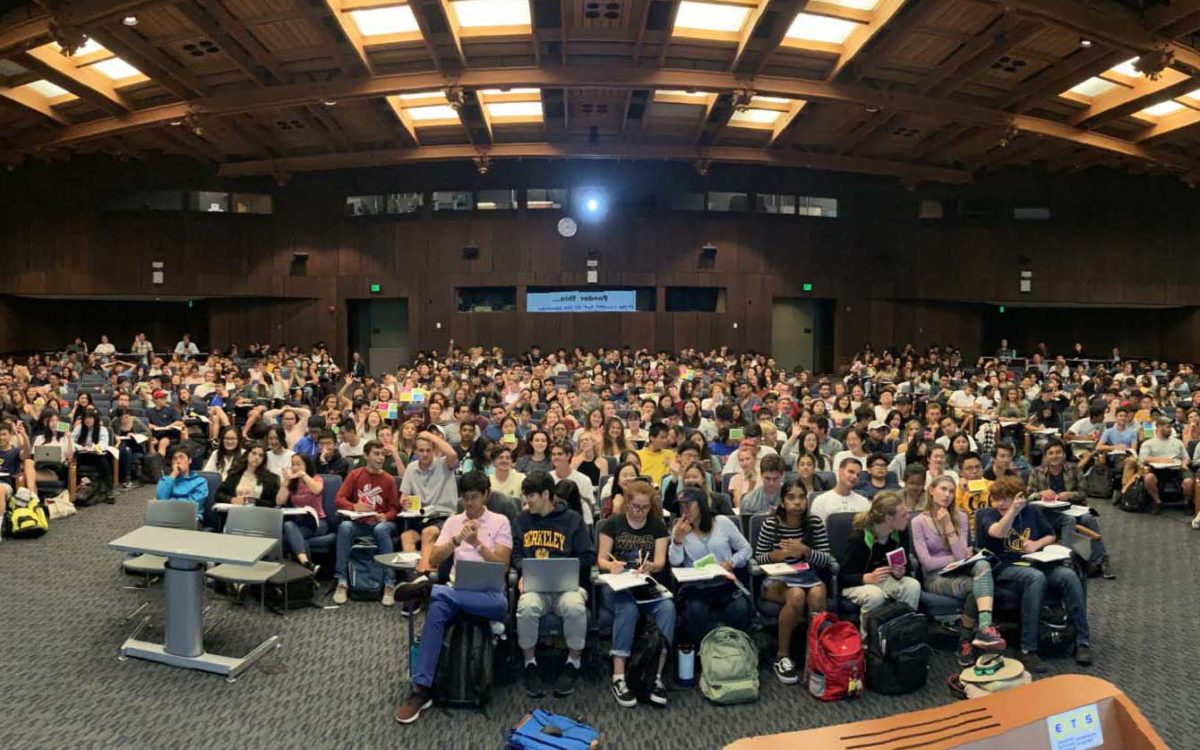 For three decades, UC Berkeley professor Alex Filippenko has taught his popular Introduction to General Astronomy class to up to 730 students in Wheeler Hall. While lecturing, he spins donuts on a string to demonstrate orbital gravity and shows awe-inspiring images of distant galaxies and the expanding universe.

The recently-completed spring semester has been different. Filippenko long has recorded his lectures and made them available online, not requiring attendance in person. But with the pandemic, he and nearly all faculty throughout U.S. higher education shifted classes entirely online. And even if the campus reopens in the fall, large classes like his likely will be considered too risky for contagion.

Yet beyond immediate health concerns, universities may move permanently away from the large lecture hall courses for other reasons. Some experts say now is the time to abandon or overhaul many of those classes to improve student learning and connections to faculty. Even if some highly regarded lecturers like Filippenko are able to impart difficult concepts in an entertaining way, many other teachers cannot, critics say.

With online content so readily available, some predict the end of the giant lecture halls, ending a tradition synonymous with college freshman year. Or will the desire for in-person community — even in giant classes — win out over technology? And when it comes to the economics of it all, will the financial efficiency of packing many students into one hall be more necessary during a recession especially if students are reluctant to pay full tuition to take online classes in their bedrooms?

In universities across California and the nation, lecture classes of over 50 or so are unlikely to be offered in traditional format in the fall, even if campuses otherwise reopen. Some hybrid of online lectures combined with small in-person discussion groups are more likely for the fall and, more significantly, possibly for the longer future.

Filippenko, who has won UC teaching awards, is ready to keep his lectures online if need be but fears students will lose out. “I think there is a real benefit from students being there in a lecture hall,” he said. Even in large halls, students “are engaged by being there with the professor in real time and having the opportunity to ask questions.” He often prods students to vote on scientific questions by holding up colored cards. He even gets them to debate astronomy topics with their seat mates.

Yet in the pandemic’s aftermath, he and other professors who enjoy the big lecture hall tradition say they are open to possible long-term changes.

The moment is ripe for some reform, according to Sherri Hughes, assistant vice president for professional learning at the American Council on Education, the prominent higher education organization. While some star professors are dynamic lecturers, research shows that formal hour-long lectures in very big classrooms can be “a pretty poor learning experience for most students.” The flux caused by the pandemic, she said, “is an opportunity for colleges and universities to say this pedagogy doesn’t work very well and to think of other ways to do this.”

The alternative will likely be some type of hybrid course combining online lectures or study material and more interactive in-person classes of 20 to 30. (Many large UC lecture classes like Filippenko’s astronomy course already include such small weekly discussion sections led by a graduate student but those are not universal across the country, Hughes said.) Instead of traditional hour-long lectures, online material may be produced and delivered in shorter segments of ten to 15 minutes each to retain student attention, she added. And technology can add a personal touch with online chat groups, virtual office hours and other items.

Yet barriers to change persist, Hughes noted. Campuses want to make the most of existing facilities and those big lecture halls are not easily broken down into smaller spaces. Plus, it’s just less expensive for the university to assign one faculty member to hundreds of tuition-paying students. That especially makes fiscal sense for gateway courses, such as introductory chemistry, biology, psychology or economics.

Not so many big halls on California public campuses

Such big lecture hall classes have a powerful grip on alumni memory and popular culture, often portrayed in films and television as stages of inspiring academic performances or places to sleep during boring sessions.

Despite the cultural touchpoints, the reality is much different, at least in California’s public systems. Large lecture hall classes make up a relatively small slice of the courses offered in the California State University (CSU) and University of California (UC).

Much of CSU’s 23 campuses were built with classrooms of fewer than 50 seats. Of the 2,794 CSU classrooms in a recent system inventory, only 133 can accommodate more than 100 students, and only 3 seat more than 300, according to a system spokeswoman. Across UC’s nine undergraduate campuses, most report that 15% or less of their lecture rooms can seat more than 100 and only 2% or so can accommodate more than 300 students, according to 2018 survey.

The downsides of very large, impersonal classes are clear, according to Kristen A. Renn, the immediate past president of the Association for the Study of Higher Education (ASHE). While an excellent lecturer can lead a big and compelling class, not all professors can. As a result, “it is easy for students to feel a little lost, feel you don’t belong,” said Renn, who is Michigan State University’s associate dean of undergraduate studies for student success research. “It’s not impossible to create a welcoming environment in a giant hall, but it’s harder to convey that in those larger spaces,” Renn said.

Still, she added, Covid-19 is not “going to kill the large lecture class in higher education.” California campuses trying to accommodate population growth need them to handle enrollment. And after the pandemic, many students will be “so hungry to return to real-life campus and classes that they probably will not mind being in big classes.” However, others, especially those with more restricted schedules, have come to appreciate online learning and will be willing to continue at least partly with such courses, she said.

A new look for the big college lecture halls

Some universities are redesigning big lecture halls rather than kill them.

While classes remain large, some rooms are being re-built to encourage more engagement and flexibility. Instead of fixed auditorium chairs, rolling tables and chairs allow for group projects and discussions. And even more dramatic, Oregon State University’s 600-seat in-the-round lecture auditorium, with wraparound display screens and high-tech lectern, has become a much-praised model since it opened five years ago.

UC Riverside is following suit and constructing a 400-seat round lecture hall as part of a new classroom complex. The TED-Talk environment, with professors likely to walk all over the room, may not attract all professors and students but many have expressed support for it, according to Kenneth Baerenklau, UC Riverside’s associate provost. The hall will provide another option among diverse settings for teaching and learning, he added. UC Riverside has 13 rooms capable of seating between 100 and 200 students and nine larger ones, with 570 and 416 the biggest two, he said.

The new hall’s design aims to reduce the big physical distances in more traditional auditoriums, said Baerenklau, who has taught economics classes of 200 or so. “I think both faculty and students feel less engaged when you can’t quite make out someone’s face from a distance.”

Still, CSU Northridge interim vice provost Matthew Cahn said the pandemic and its aftermath are likely to intensify discussions about “what is an optimal (class) size and what is best for students.” The Covid-19 crisis is creating a chance “to retain those things we feel and students feel we’ve done well and maybe leave behind some things we have not done so well.”

While budget limits mean that all large in-person classes won’t disappear, those classes are likely to add more technology aids like cell phone apps that allow for in-class polling and other exercises, he said. And more will add online lectures and material that don’t require live attendance, he predicted.

“We don’t know what that will look like yet,” Cahn said. But he said the university is “going to be a very different place in ten years.”

At UC Berkeley, recent political science graduate Varsha Sarveshwar took five lower-division classes with at least 100 other students and sometimes over 500, including Filippenko’s astronomy course and a class about wealth and poverty taught by Robert Reich, former U.S. Secretary of Labor in the Bill Clinton administration. Sarveshwar, who remains president of the systemwide UC Student Association through the summer, said the immense class sizes “never particularly bothered me,” in part, because of the small weekly discussion sections run by graduate students.

Surveys have hinted that students haven’t learned as much in the online courses they were suddenly forced into this spring. Many say they want to return to in-person courses, even big ones. However, Sarveshwar said she understands how some students might “feel overwhelmed” in large classes and do better with a mixture of online and smaller classes.

UC Berkeley astronomy professor Filippenko said he is open to adding more online elements to his big intro course when it resumes fully.

“Those are interesting questions and deserve some thought,” he said.

If large classes are still banned in the fall, he plans to have students watch his taped lectures from last year and to use the live online class hours for extra material and updates and allow for more questions. A pattern like that could continue in-person after large groups can once again gather safely, he said. The goal should not be to “destroy the large lecture class,” but rather to make better use of professors’ time and to provide a better education for students.