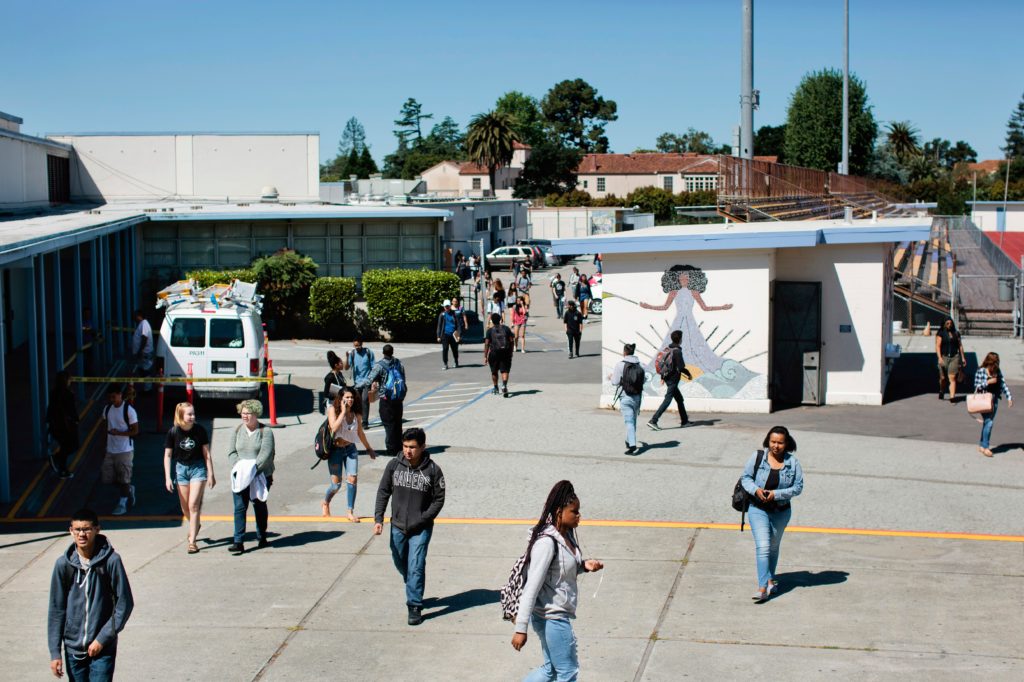 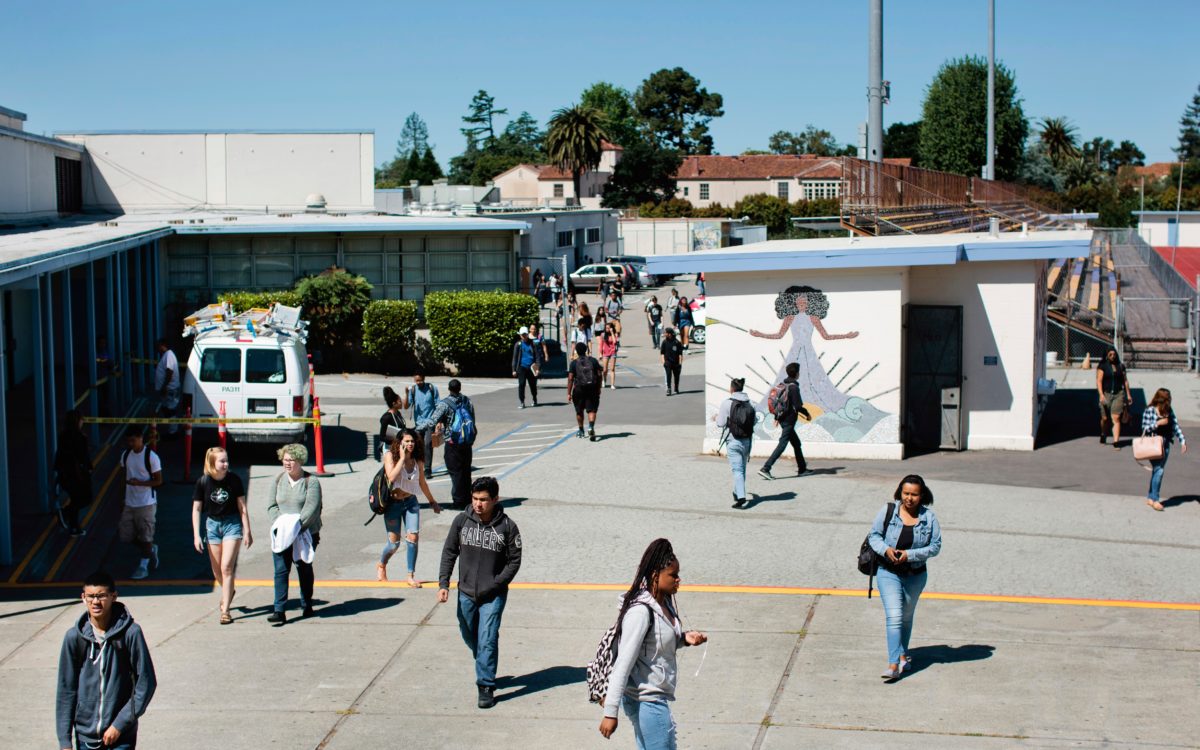 Photo: Alison Yin/EdSource
The rate of African-American student suspensions has fallen dramatically over the past decade.

Photo: Alison Yin/EdSource
The rate of African-American student suspensions has fallen dramatically over the past decade.

After nearly a decade of school discipline reform in California, the suspension rate for African-American students continued to decline last year, according to recently released state data.

The statewide suspension rate was 3.5 percent in 2018-19, the same as the year before, but the suspension rate among black students fell from 9.4 percent to 9.1 percent, a drop of more than 3,500 suspensions, according to the California Department of Education. Among Latino students the rate remained the same, 3.6 percent.

The numbers suggest that a years-long push by discipline reform advocates, educators and the state toward restorative justice and positive behavior interventions may be working, experts said.

In 2013, the state banned suspensions for willful defiance, defined as defying teachers’ authority or disrupting school activities, in grades K-3 because the suspensions were disproportionately applied to students of color and were thought to be ineffective in improving behavior. Last year Gov. Newsom expanded the ban to K-8 grades. Meanwhile, in 2013, Los Angeles Unified banned willful defiance suspensions for all grades.

Reform efforts were aimed at improving outcomes for students, especially those of color, who are more likely to end up in prison as adults if they were suspended in school, according to a report by the American Civil Liberties Union. Instead of being sent home, students would see counselors or social workers on campus, who would help address the underlying cause of the student’s misbehavior. Schools across the state have hired more counselors and implemented programs such as restorative justice to improve student behavior and campus climate overall.

In 2011-12, when those efforts were just getting underway, California’s suspension rate was 5.8 percent and 13.8 percent for African-American students. In all, California students were suspended more than 700,000 times that year.

“I think there’s now a general understanding that change (to the discipline system) needed to happen,” said Daniel Losen, director of the Center for Civil Rights Remedies at UCLA, which has researched school discipline around the country. “Districts are starting to realize that keeping kids in school makes more sense, financially and otherwise, both in the short term and long term.”

Some of the state’s lowest suspension rates were in urban districts that have invested in counseling and staff training to improve school climate. Los Angeles Unified, which banned willful defiance suspensions six years ago and implemented a host of counseling and restorative justice programs, continued to see its numbers drop across all suspension categories, including fighting, selling drugs and bringing weapons to school. The district’s overall suspension rate was just 0.7 percent last school year.

“We strongly believe that students belong in school,” said San Francisco Unified spokeswoman Laura Dudnick. “We focus on restorative practices, positive behavior interventions and supports, and trauma-sensitive practices. Per board policy, suspension is a last resort and often only utilized when legally mandated,” such as when a student sells drugs on campus or brings a firearm to school.

Orange County saw a drop from 4.3 percent in 2011-12 to 2.2 percent last year, which Superintendent Al Mijares attributed to a strong push by the county’s 28 districts to improve school climate overall. He also credited changes in state policies: the ban on willful defiance suspensions in lower grades; the California School Dashboard, which includes suspension rates as a measure of a school’s success; and the Local Control and Accountability Plan, a state-required roadmap for district priorities and spending.

“The LCAP forced us to create metrics and then hit our metrics,” he said. “We’re happy because these numbers show the fruit of our labor. It shows there’s an intelligent way to approach behavior in the classroom, and it works.”

Districts in Orange County have used their LCAP funding to hire more counselors, psychologists and social workers, train teachers and after-school staff on restorative practices and take other steps to improve student behavior.

“I think we’ve learned that social-emotional learning is mandatory. If a student is disrupting class, kicking them out on the street is not the answer,” Mijares said. “There’s a lot more awareness by everyone who works in schools that when kids are having problems, we have to help them.”

Discipline improved at many rural districts, as well. One of the steepest declines in the state was at the Allensworth Elementary School District, south of Visalia in Tulare County, which saw its suspension rate decline from 7.3 percent to 2 percent over the past year. Even though the drop represents a small number of students, it is significant for the 85-student, K-8 district, said Superintendent Max Friedman.

The school staff has been focusing on school climate for several years, he said. Instead of suspensions, students are sent to detention after school, before school or at lunch, where they work on homework and talk to school staff about whatever problems they may be experiencing.

The school also offers rewards for good behavior, such as pizza parties and class field trips to the pumpkin patch or Fresno State University football games, Friedman said. The staff also meets regularly with parents, nearly all of whom are low-income farm workers whose primary language is Spanish. That’s helped create an atmosphere of trust, he said.

The efforts have also had a positive impact on attendance. Allensworth had a chronic absenteeism rate of just 4.4 percent last year, about a third of the statewide rate and 18.1 percentage points lower than the district’s rate the previous year.

“Our teachers have done an outstanding job at making our kids feel safe. We’ve all worked hard on this and it’s starting to pay off,” Friedman said. “Kids need to feel safe to learn.”

While the latest statewide discipline figures show improvement, they don’t tell the whole story of campus climate in California schools, Losen said. The data doesn’t show the frequency or duration of suspensions, or the number of on-campus arrests. He also noted that some districts might be overstating their investments in alternative discipline measures, such as restorative justice, and underreporting their suspensions. A recent study he worked on showed that 18 percent of charter schools nationwide didn’t accurately report their suspensions.

But for the most part, he believes the most recent discipline data in California is accurate and reflects a genuine improvement in classroom behavior.

“By and large, the numbers are reliable in California,” Losen said. “There’s a lot of groups holding districts’ feet to the fire, making sure these numbers are right.…And California is one of the few states that’s made discipline a measure of school accountability. California deserves some credit for that.”