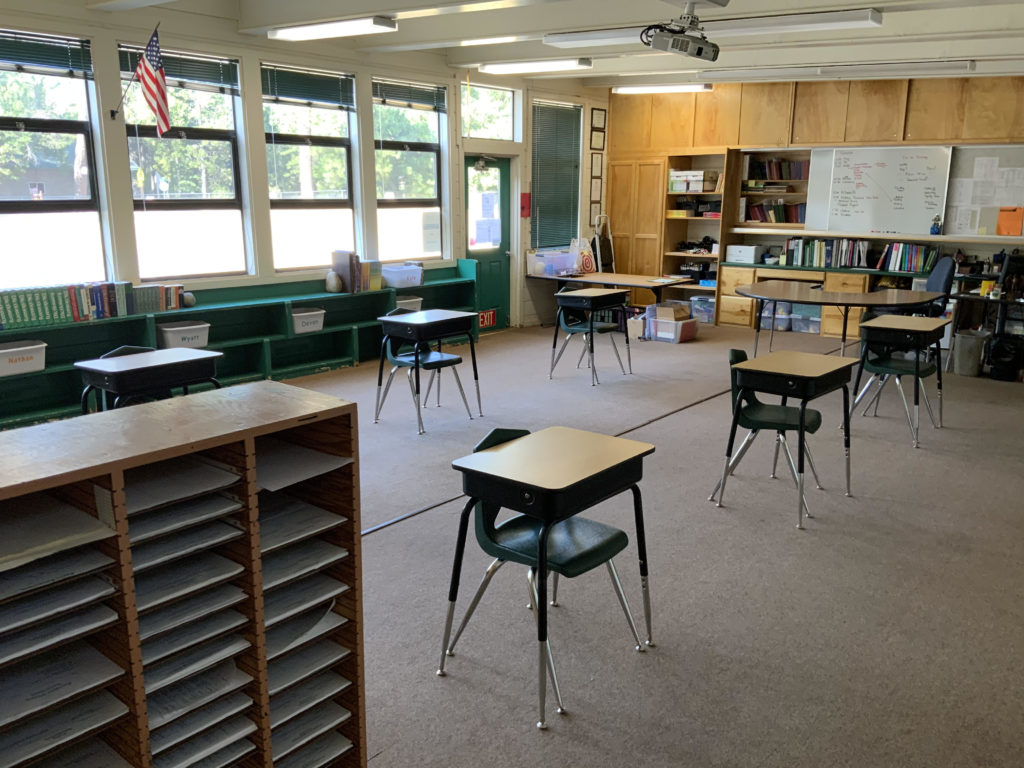 Students will attend school under a hybrid model to allow distancing 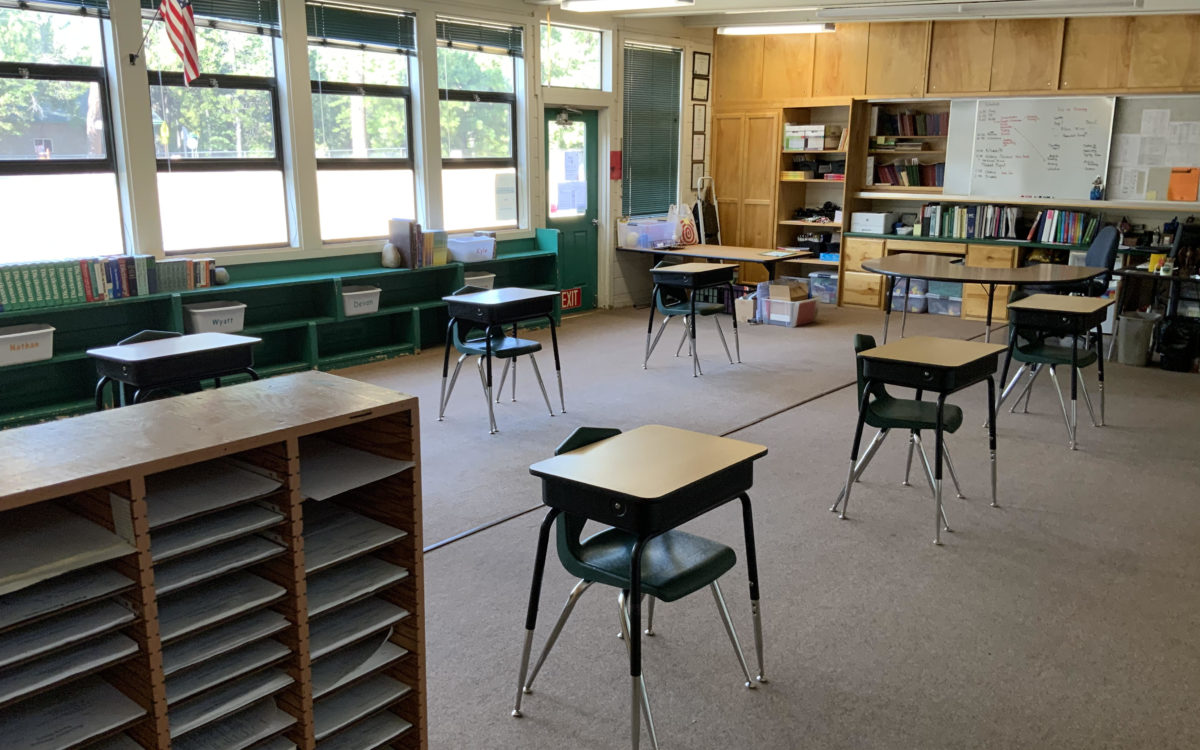 Six students walked into their Indian Diggings Elementary School classroom on Monday for the first time since March when Covid-19 shut down all classes statewide.

One of the smallest districts in the state in a county with comparatively low infection rates, Indian Diggings Elementary School District has still had to cope with the challenges of fighting the coronavirus — demonstrating that even the smallest of schools are feeling the invasive impact of Covid-19 in the classroom.

The K-8 school is located in rural El Dorado County, along a narrow road in Somerset which is about 50 miles east of Sacramento. When children graduate eighth grade, they typically move on to one of the high schools in the El Dorado Union High School District in the southern region of the county.

Indian Diggings enrolled 14 students this school year, one of 25 of the state’s 1,000 districts with less than 20 students. The school is the only one in the district.  It was able to reopen for in-person instruction under a hybrid model without a waiver because the county where the district is located has comparatively low infections and is not on the state’s Covid-19 monitoring list.

It made for a unique first day of school.

“Oh goodness… it did not feel normal,” said Grant Coffin, the school’s superintendent, principal and only full-time certified teacher.

On a normal first day, the students would all have arrived ready for class. Instead, they are attending on different days to accommodate social distancing rules and the need to keep students’ desks 6 feet apart. Desks in one of the classrooms are also sporting a new look: plastic shields set upright across the tables where the younger students will sit as they practice their phonics, the one lesson during which they need to take their masks off.

For now,  kindergarten through second grade students will attend class in person Monday through Thursday, though they will attend for only half a day, 8:30 a.m. to noon, to keep them engaged. Those students will have class in one of the rooms in the school, and the second room will be occupied by the older students. On Mondays and Wednesdays, grades seven and eight will also attend in-person classes from 8:30 a.m. to 2:55 p.m., and grades four, five and six will attend on Tuesdays and Thursdays during the same time.

There are no third-graders this year, and Fridays are tutoring days for students who need additional support. On the days when the older students don’t go to campus, they will have readings and other assignments to complete from home that help them practice their spelling, handwriting, typing, math and reading of news articles, and more.

Coffin had done a lot of preparation for Monday’s opening day.

Following state guidance, Coffin arranged for all students to have their temperatures taken before entering the school building.

Two students arrived with temperatures that were too high for them to be allowed on school grounds, according to Coffin. Per county public health guidelines, the students needed to see a school nurse, but Indian Diggings doesn’t have one.

So Coffin and his staff spent a portion of their morning following county public health protocol — calling for a nurse to register the students’ temperatures — all in a concerted effort to ensure the safety of students and families while keeping their doors open.

The region where Indian Diggings School is located has had few cases of Covid-19: eight cases total, according to the county’s Covid-19 tracker, though the surrounding regions have higher case numbers. And in the entire county of nearly 200,000, two people have died of Covid-19.

If El Dorado County’s infection rate increases and it is put on the state monitoring list forcing the school to shut down, Coffin is prepared.

“If I get a call from the health department, and we have to close the next morning, we could start right away,” he said. “We have distance learning protocols ready to go. All the kids have two laptops — one for school and one for home.”

Students submit their assignments through Google Classroom, whether they are at home or on campus.

Coffin spent his summer attending virtual trainings on how to teach remotely, Covid-19 safety protocols, how to use Zoom and Google Classroom effectively, in addition to the usual trainings on teaching subjects such as math, English language arts, history and science.

Coffin typically has several instructional aides and other volunteers who assist him with some teaching sessions, but that was cut down to just one this school year to keep with social distancing rules. An aide assists him as he moves between the two classrooms in the school teaching various subjects throughout the day.

Despite the safety precautions and heightened pressure of setting up backup plans in the case of an outbreak, Coffin is prepared to take on his eighth year of leading the school. His father was also a schoolhouse principal and teacher, and Coffin attended small schools in Santa Cruz throughout elementary and junior high. Before arriving at Indian Diggings, he taught kindergarten and first grade students, worked at a district office, served as vice principal and later as a principal.

“This idea of the multi-age classroom and whatnot has always piqued my interest,” said Coffin, who just reached his 25th year as a certified teacher.

Keeping the school open and operating is a challenge, however.  “With small schools like ourselves there’s just no safety net,” said Coffin.

As a district with only one school and 14 enrolled students, Indian Diggings faces tight funding. While other districts depend on their enrollments to generate the state funding they need, Indian Diggings is among the 105 districts in the state classified as a  “necessary small school,” which are typically located in rural areas. The designation qualifies the districts for a flat base amount based on its number of students and teachers plus additional funding based on the number of low income and other high needs students. For Indian Diggings, that totalled $250,000 in state funding for 2019-20.  “I feel it’s a constant rollercoaster. We never know what we are going to get,” Coffin said referring to the state’s funding.  There are also emergencies for repairs that can force him to use reserve funds. Money raised from the community is used for student projects and field trips.

“He really wanted to be able to be there in-person, even though it’s different than before,” said Frolich. “He can complete things at home, but to be here to get, you know, a complete explanation from his teacher, be able to talk through some of the assignments or the difficult parts will make it easier for him to then self-manage on the days he’s not on campus.”

The school feels like a home away from home, according to Frolich, who lives nearby. She attended the school in the early 90s and now works as the school’s office manager.

“It’s a place we’re familiar with,” said Frolich. “When you think of it in terms of the level of risk, you know, this feels fairly safe knowing that… anyone at any time can be carrying the virus.”

The school is located in a region on the edge of a series of national parks that line the majority of the eastern California border — one of them being Yosemite, where Indian Diggings students were set to go for their annual Spring trip before the pandemic forced campuses to close. Its location is one of its draws, Frolich said.

“Part of why we live up here in the rural areas is to have that distance and lower population,” she said.

Coffin too knows the draw of the area.

He and his wife, whose family lives in the area, wanted to eventually move there. It all came together when the position opened up, after Coffin’s predecessor left the job after 24 years.

Coffin, now 49 years old, was looking for a place to teach and lead for the remainder of his career. The location, the schoolhouse system, and being able to once again teach — rather than only work on the administrative side of education — led him to apply.

“There are some things I don’t have to do, but I think the things I do have to do outweigh,” he said as he laughed. “But I enjoy it. I enjoy the community and I enjoy the kids. It’s been really nice to be their teacher for these seven years… I am kind of waiting for that day when I have had a student for nine years.”