With shout-out to teachers, Democratic candidates talk about schools in Houston 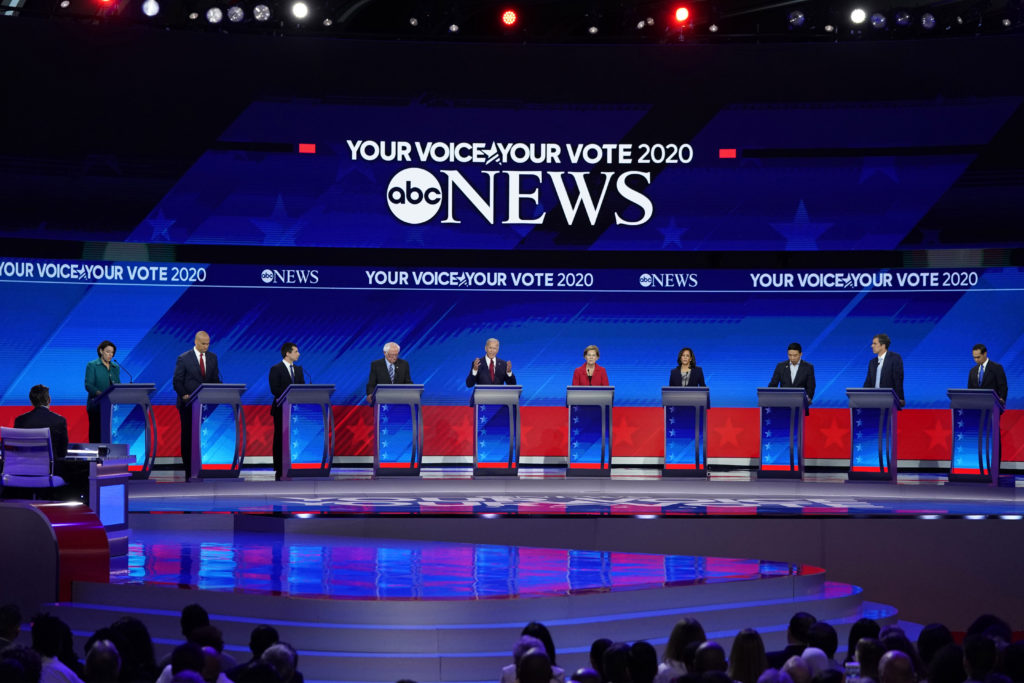 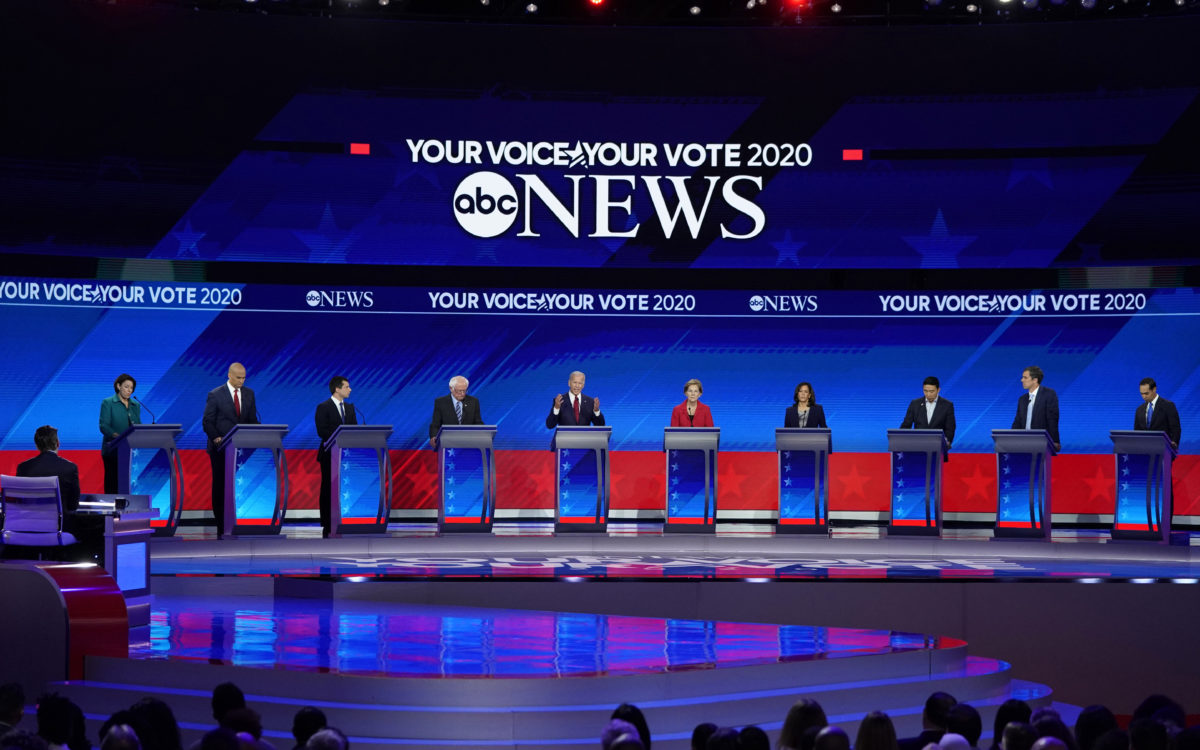 Education featured more prominently in the Democratic presidential campaign debate in Houston last night than in either of the two earlier debates. Several gave teachers a shout-out, agreeing that they needed to be paid more, more help in the classroom and more support services in helping children deal with problems they bring from their homes and neighborhoods. Perhaps for the first time, Joe Biden called for preschool for all 3-, 4- and 5-year olds, making clear he meant school not day care. although he didn’t say how this would be paid for. For the most part, candidates repeated pledges they have already made on the campaign trail but this time they had a national television audience to whom they could pledge support for teachers, school funding, pre-K and the foundational value that quality schools matter.

Here are some key excerpts from the debate held at Texas Southern University.

I refuse to postpone giving single child in America, no matter their zip code, pre-K all the way through high school and beyond. I have a bold plan to deal with making sure we triple the money for at-risk schools that are Title I schools, from 15 to $45 billion a year.

Let’s make sure that we help the teachers deal with the problems that come from home. We have one school psychologist for every 1,500 kids in America today. It’s crazy.

I’m married to a teacher. My deceased wife is a teacher. They have every problem coming to them. We have to make sure that every single child does, in fact, have 3-, 4- and 5-year-olds go to school. School. Not daycare. School.

We bring social workers in to homes and parents to help them deal with how to raise their children.

Even though I had no formal authority as mayor to run a school system, I stepped up and took responsibility for our schools, and we produced results. A lot of folks here are talking about raising teacher salaries. We actually did it in Newark, New Jersey.

Strategies like investing in our children work. And I’ll tell you this. I am tired of us thinking about these problems isolated, disconnected from other issues.

That’s why my friend, Secretary Castro, is 100 percent right. We are in the reality we are right now because, Mr. Vice President, of overtly racist policies, not 400 years ago, just in my lifetime, that were red-lining communities, disinvesting in communities, and more than just that, my kids are not only struggling with racial segregation and housing and the challenges of underfunded schools, but they’re also struggling with environmental injustice.

Step one is appoint a secretary of education who actually believes in public education.

If we want to get the results that we expect for our children, we have to support and compensate the teaching profession. Respect teachers the way we do soldiers and pay them more like the way we do doctors.

I know that today our schools are segregated because our neighborhoods are segregated. I have an education plan, like a lot of folks up here, that would pay teachers more, that would recruit diverse ranks of teachers, that would invest in our public schools, but I also believe that we have to connect the dots to uplift the quality of life to invest in housing opportunity, to invest in job opportunity, to invest in community schools that offer resources like parents able to go back and get their GED, and health care opportunities and those things that truly ensure that the entire family can prosper.

Racism in America is endemic. It is foundational. We can mark the creation of this country not at the Fourth of July, 1776, but August 20, 1619, when the first kidnapped African was brought to this country against his will and in bondage and as a slave built the greatness and the success and the wealth that neither he nor his descendants would ever be able to fully participate in and enjoy. We have to be able to answer this challenge. And it is found in our education system, where in Texas, a 5-year-old child in kindergarten is five times as likely to be disciplined or suspended or expelled based on the color of their skin.

We are the wealthiest country in the history of the world. And yet, we have the highest child poverty rate of almost any country on earth. We have teachers in this country who are leaving education because they can’t work two or three jobs to support themselves.

Which is why, under my legislation, we’ll move to see that every teacher in America makes at least $60,000 a year. What we will also do is not only have universal pre-K, we will make public colleges and universities and HBCUs debt-free. And what we will always also do, because this is an incredible burden on millions and millions of young people who did nothing wrong except try to get the education they need, we are going to cancel all student debt in this country. And we are going to do that by imposing a tax on Wall Street speculation.

I have offered in this campaign a proposal to deal with this, which will be the first in the nation, federal investment, in closing the teacher pay gap, which is $13,500 a year. Because right now, in our public schools, our teachers, 94 percent of them are coming out of their own pocket to help pay for school supplies. And that is wrong.

I also want to talk about where we are here at Texas Southern University and what it means in terms of HBCUs. I have, as part of my proposal that we will put $2 trillion into investing in our HBCUs for teachers. Because as a proud graduate of a historically black college and university, I will say that it is our HBCUs that disproportionately produce teachers and those who serve in these many professions. This is a critical point, if a black child has a black teacher before the end of 3rd grade, they’re 13 percent more likely to go to college. If that child has had two black teachers before the end of third grade, they’re 32 percent more likely to go to college. So, when we talk about investing in our public education system, it is at the source of so much. When we fix it, that will fix so many other things. We must invest in the potential of our children.

I wanted to be a public school teacher since I was in second grade. And let’s be clear in all the ways we talk about this, money for public schools should stay in public schools, not go anywhere else.

I have proposed a two-cent wealth tax on the top one-tenth of one percent in this country. That would give us enough money to start with our babies by providing universal child care for every baby age zero to 5, universal pre-K for every 3-year-old and 4-year-old in this country to raise the wages of every child-care worker and preschool teacher in this country, cancel student loan debt for 95 percent of the folks who’ve got it and strengthen our unions.

I’ve already made my commitment. We will have a secretary of education who has been a public school teacher.

Let me be clear, I am pro-good school…. So we need to pay teachers more, because the data clearly shows that a good teacher is worth his or her weight in gold. We need to lighten up the emphasis on standardized tests, which do not measure anything fundamental about our character or human worth.

But here’s the big one. The data clearly shows that 65 to 70 percent of our students’ outcomes are determined outside of the school. We’re talking about time spent at home with the parents, words read to them when they’re young, stress levels in the house, income, type of neighborhood.

We’re putting money into schools, and educators know this, we’re saying you’re 100 percent responsible for educating your kids but you can only control 30 percent. They all know this. The answer is to put money directly into the families and neighborhoods to give our kids a chance to learn and our teachers a chance to teach.

For a full transcript of the debate from the Washington Post, go here.