Where to start? Inside one California district’s approach to redesign STEM education 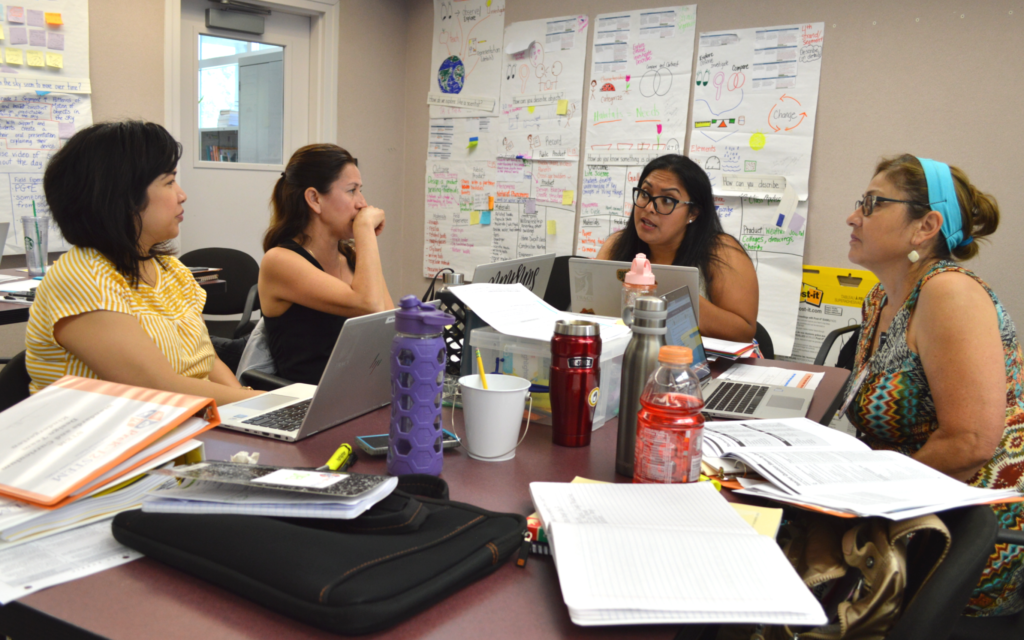 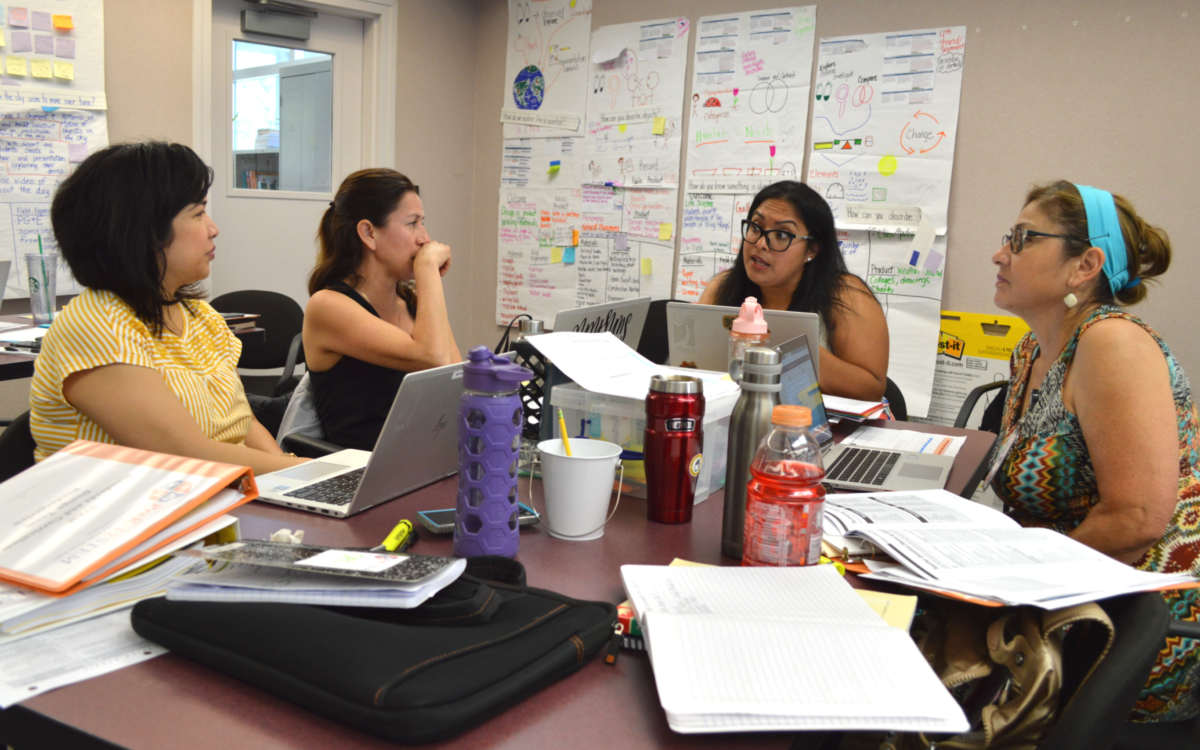 Photo: Sydney Johnson/EdSource
Teachers in Tracy Unified are meeting this summer to redesign the district's approach to STEM education.

Photo: Sydney Johnson/EdSource
Teachers in Tracy Unified are meeting this summer to redesign the district's approach to STEM education.

School is out for summer. But in Tracy, Calif., teachers have been hard at work.

Inside the staff development training room at the Tracy Unified School District, a group of about 25 teachers and curriculum specialists gathered this summer to overhaul the district’s approach to teaching science, technology, engineering and math, or STEM. The plan is to go from an approach in which most subjects are taught separately to one in which lessons integrate state standards in math, science, computer science and English language arts.

“We just can’t be siloed anymore,” said Deborah Coker, a teacher on special assignment at Tracy Unified. “There’s not enough time in the day to teach everything separately.”

Across California, schools and districts are working to implement the Next Generation Science Standards that were adopted in 2013 and to prepare students for the new California Science Test, which was administered for the first time this year. Tracy Unified’s new STEM curriculum is rooted in the new science standards, which emphasize hands-on projects and integrate several scientific disciplines. Each STEM unit will feature science and engineering projects that involve elements such as writing, public presentations, math and computer science.

With the new STEM curriculum, district officials and their research partners aim to increase enrollment among girls and students of color in Advance Placement and International Baccalaureate courses, which can offer college credit for high school students. They also want to increase the number of AP test takers and improve pass rates. And they hope to increase the number of students completing courses needed to apply to California State University or University of California campuses, known as the A-G requirements.

The goal is also to boost standardized test scores for all students in math, science and English Language Arts. And long-term, they want to prepare more students in Tracy for college and careers in STEM to attract more high-tech businesses to the area.

It’s all part of a research project funded by a $4 million Education Innovation and Research grant from the U.S. Department of Education. The five-year project will start with grades preK-5 in its first year and expand to grades 6-12 in its second year.

Improving student performance won’t be a simple task. Just 30 percent of students in the district met or exceeded math standards in 2017-18, based on scores from the Smarter Balanced assessments — annual standardized tests aligned with the Common Core standards and administered to California students in grades 3-8 and 11.

Enrollment of girls in STEM courses has increased across the country, where girls make up nearly half the enrollment in high school science and math courses, according to figures from the National Science Foundation. However in California, boys still heavily outnumber girls in AP courses such as computer science and physics, according to data from the College Board, which administers the AP program.

The trend continues beyond high school. In California, women were awarded only about 20 percent of bachelor’s degrees in engineering and computer science in 2016, according to the Public Policy Institute of California.

Part of Tracy Unified’s approach in designing the new curriculum is reducing disparities by requiring all students to take part in rigorous scientific lessons. Take coding, for example.

“Doing it across the curriculum is key,” said Bill Slotnik, executive director of the Community Training and Assistance Center, a nonprofit that the district is partnering with to evaluate the five-year project. “Coding is a core skill students will need to have. But in most districts coding is an elective and it’s often dominated by males and high-income students. If you embed coding into the curriculum so all kids have access to it, you are now reaching females and males, students of color, and not just white kids.”

Schools across the state have been introducing the new science standards — but it’s been a struggle for some. Many districts, including Tracy Unified, have yet to adopt curriculum materials that support the new standards. Still, that hasn’t slowed down NGSS implementation in Tracy Unified. Teachers across the district have been trained in new teaching methods and hands-on activities.

Officials leading the project believe Tracy Unified is well suited to launch a STEM experiment because it had a head start implementing the new science standards. The district was selected in 2014 for the California Early Implementation Initiative, a statewide project that aims to fast-track eight districts and two charter school management organizations in implementing the new standards. As part of the initiative, teachers were trained in the new standards and schools tested out NGSS materials and implementation strategies.

Tracy Unified’s STEM project could also serve as a model for other districts, as its demographic shifts reflect changes occurring statewide. The portion of Hispanic or Latino students in Tracy Unified has been increasing in recent years while the portion of white students has dipped. Statewide, Hispanic or Latino students now make up the majority of California’s student population.

“Tracy is a district that we would argue is undergoing a set of changing demographics not unique but emblematic of California,” Slotnik said.

“Our whole dynamic has changed, but we as a district haven’t changed to be as reactive or proactive to the changing dynamics in our district,” said Superintendent Brian Stephens. “We want to see more students take part in our upper level classes and we thought perhaps were weren’t preparing them enough to take those AP classes.”

The project leaders will later share their methods and findings with groups such as the California STEM Network, a project of Children Now, a nonprofit advocacy organization. Slotnik hopes districts across California and the country can learn from the model and adapt it to their needs.

“There is a lot of hunger around this and it’s so clear that low-income students and students of color and female students have really been shut out of STEM fields,” he said. “People are looking for ways to make a difference for these kids.”

As part of the STEM redesign, officials brought together the city’s mayor, Lawrence Livermore Labs, the University of the Pacific – College of Engineering and Computer Science departments and more than 30 employers in STEM-related fields. The group hopes that improving the region’s STEM and college-ready pipeline will attract high-tech businesses to Tracy, a suburb east of the Bay Area.

Educators leading the curriculum design this summer are working on developing four STEM teaching units. Each unit includes a design challenge that incorporates math, engineering, science, computer science and literacy and students must present their projects. In one 5th grade unit, for example, students will be asked to design a way to mitigate pollution, waste or other negative human impact on environmental resources at the school, then write up and share the proposal with their principal. In another unit students will design a water filtration system and demonstrate the technology to other 5th-graders.

Science and engineering lessons are at the center of those design challenges. “We want STEM that has integrity, not cheap coding lessons,” said Debra Schneider, the project director and director of instructional media services and curriculum for Tracy Unified.

During the recent training, walls in the staff development room were lined with posters covered in handwritten sketches of potential class experiments. Teachers from each grade level were seated together to dissect state standards and design a blueprint for what the next school year will look like.

The teachers even took part in an engineering assignment themselves. The task? Raise a book above the table using only a piece of paper and five centimeters of tape. Every group had a different approach to the design structure — and each one succeeded.

Although teachers in the training session see value in changing their approach, shifting an entire district’s way of teaching is likely to create some tensions. Vanessa Garcia, who teaches 5th grade at the district’s bilingual school, South/West Park, anticipates that teachers will be concerned they won’t have enough time to prepare for the new curriculum. “When is time for planning? That’s the only thing we might anticipate is a resistance at the beginning,” she said.

To ease that concern, the new 5th-grade lessons won’t begin until five weeks into the start of the school year, which Garcia said will give those teachers time to ask questions and receive training during an in-service day.

“We aren’t pushing this agenda at the beginning of the year,” she said. “It’s going to be a significant amount of time that they have to look at it and ask questions.”

It’s still too soon to say what the outcomes of the new curriculum will be. But the superintendent hopes introducing more students to STEM will spark new interest.

“In the long term will it bring in more high-tech jobs? That’s certainly a goal, but whether it does or not, we are exposing kids to things that they have not been exposed to before,” Stephens said. “I think that will be a success.”