Consistent to the end, Jerry Brown says it's all about teachers and students 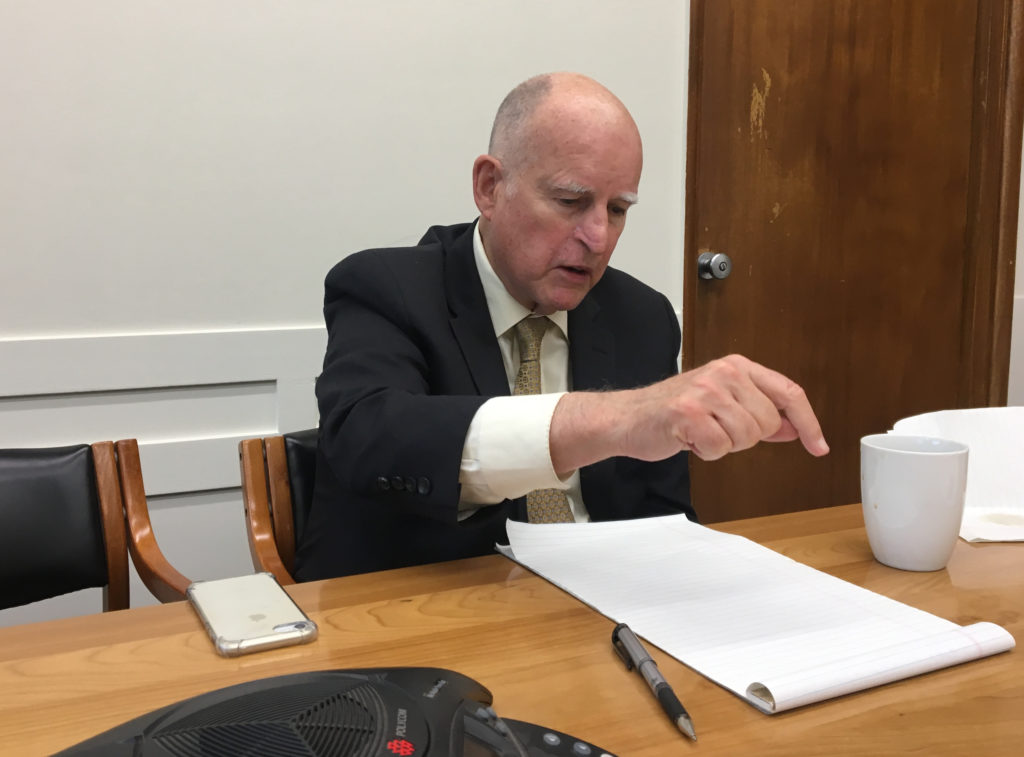 He describes his signature Local Control Funding Formula as "a major milestone." 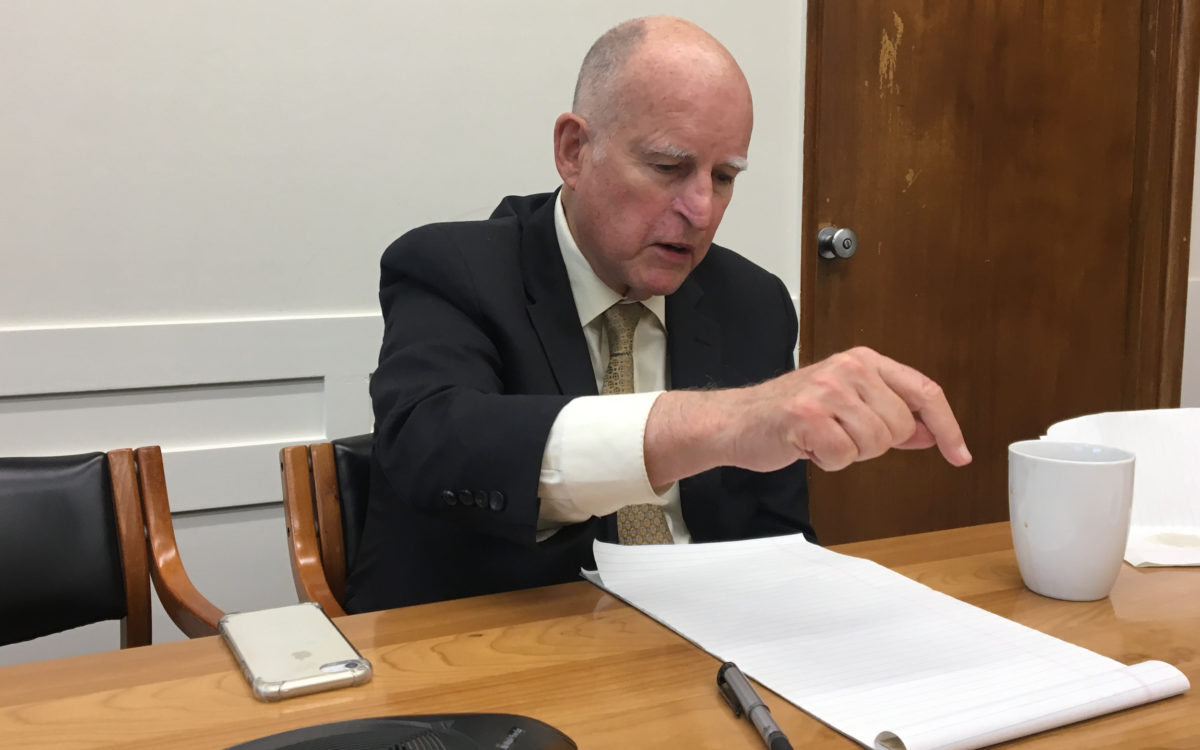 Over many years, outgoing Gov. Jerry Brown has been remarkably consistent on major policy challenges he has tackled on any number of issues, including education.

Brown’s consistency, along with his views rooted in his Catholic education, first at St. Ignatius High School in San Francisco and then at the Sacred Heart Novitiate, a Jesuit seminary, was on full display on Friday when I met with him along with my colleague John Fensterwald, in his last media interview in the governor’s office.

We talked with Brown as the offices around him were being emptied of furniture, with First Dog Colusa Brown, his brown and white-pawed Corgi lying respectfully under the table without interrupting the conversation.

Always provocative, Brown repeated his disdain for an excessive focus on data, and argued against more controls over charter schools.

These are both areas where incoming Governor Gavin Newsom has pledged to take a different approach.

During his governorship, Brown has come under pressure from advocates and researchers to set up a data system that tracks students from the K-12 schools into college and the workplace. But he has resisted by refusing to allocate funds to do so.

Newsom, by contrast, has said it is “profoundly important” to improve California’s data systems, and pledged during his campaign to “connect our early childhood, K-12 and higher education data systems to improve student outcomes.”

Brown continued to dissent until the very end.

“Where do we want to start? At birth , I guess? Get their profile into the computer then make them follow them for the rest of their lives?”

There was, he said, “a eugenics, totalitarian aspect” to this effort to track children from birth — implying that it was comparable to what is being done in some of the provinces in China.

He allowed that some data collection is justified. “But not all data, not data über alles.”

“There is the ever-present tendency here in the State Capitol to adopt the corporate notion that if you want to do anything you have to measure it,” he said.

As he has done throughout his governorship, he returned to what he thinks is the key to a good education: the relationship between the teacher and student.

“I think the emphasis on the teacher and the living role that they encounter in the classroom is most important, as opposed to this obsession with more and more metrics, collected over more and more years, to attempt to shape policy but which in many cases do not.”

He pushed back against the notion that just because the state is giving schools money, that schools should provide more and more data to show how they are spending it, and to show they are getting results.

“That is a Leninist concept at heart, and I am going to have to stand against the drift here,” he said. “Let us go back to Matthew Arnold and figure out what beauty, and truth and friendship and mentoring. These are all real things.”

LISTEN TO PODCAST WITH JERRY BROWN

Arnold is the 19th century poet who among other things wrote the poem Dover Beach, with lines like “Love, let us be true to one another/for the world which seems to lie before us like a land of dreams/so various, so beautiful, so/hath really neither joy, nor love, nor light.”

“There’s a kind of childlike faith that if we just measure kids like stock prices that will make the value go up, and I am skeptical.”

He described the Local Control Funding Formula, the legislation he championed directing funds at low income and other high needs children, and giving more decision-making to local communities, as a “major milestone.” In the same breath, he alluded to philosopher Martin Buber’s “I-Thou” relationship between human beings and God, saying the law was mere “mechanics.” More important was the philosophy behind it — that “in the spirit of Martin Buber, life is meeting, and students meet the teacher in the classroom.” That, he said, “is a profoundly different domain than metrics and algorithms, which are the playthings of distant academics and central politicians.”

Brown was equally adamant about resisting imposing limits on charter schools, even though he said they were “not a magic bullet.”

That contrasts with Newsom’s pledge to support legislation that Brown has vetoed several times requiring greater transparency and accountability in charter school operations.

Brown is unique among California’s governors — and probably governors anywhere — in that he is the founder of two charter schools, the Oakland Military Institute and the Oakland School for the Arts. He told us he has raised “millions and millions of dollars” to start them and keep them going.

He recalled how when he was mayor of Oakland he went to the school board to petition to open the Military Institute. The board rejected his proposal. “They said having a military school in Oakland would be like having a Reagan Library in Berkeley,” he said. “So it (denying the charter school) was purely ideological.” He was eventually able to convince the State Board of Education to approve the charter application, thanks in part to the support from the late GAP founder Don Fisher and Netflix founder Reed Hastings, who were on the board at the time.

Both Newsom and the incoming superintendent of public instruction Tony Thurmond, who took his oath of office Monday morning before Newsom’s swearing in,  have talked about imposing a pause on charter school expansion in the state.

But Brown opposes that notion, even in places like Los Angeles and Oakland, which in his words have “so many charter schools, and they don’t have enough funds.”

He acknowledged that is a “troublesome problem.” Nonetheless, he said, “because I think charter schools are challenging, I’ve resisted more onerous rules that quite frankly are designed to reduce charter schools in the guise of making them more accountable,” he said.

Brown demurred when I asked him whether there was anything in education he wished he had more progress on during his 16 years as governor.

“Education succumbs to waves of innovation and in some respects fads,” he said. “I am sure the wave I have caught will be different from the wave that the next governor and the governor afterward catch.”

On the whole, Brown made governing look easy. He didn’t seem to agonize, at least not publicly, over what stance to take on any number of issues, including education. How did he manage that? I’d argue that it was because his positions, whether you agreed with them or not, were underpinned by intellectual exploration, philosophical inquiry and a coherent world view that is rare in politics.