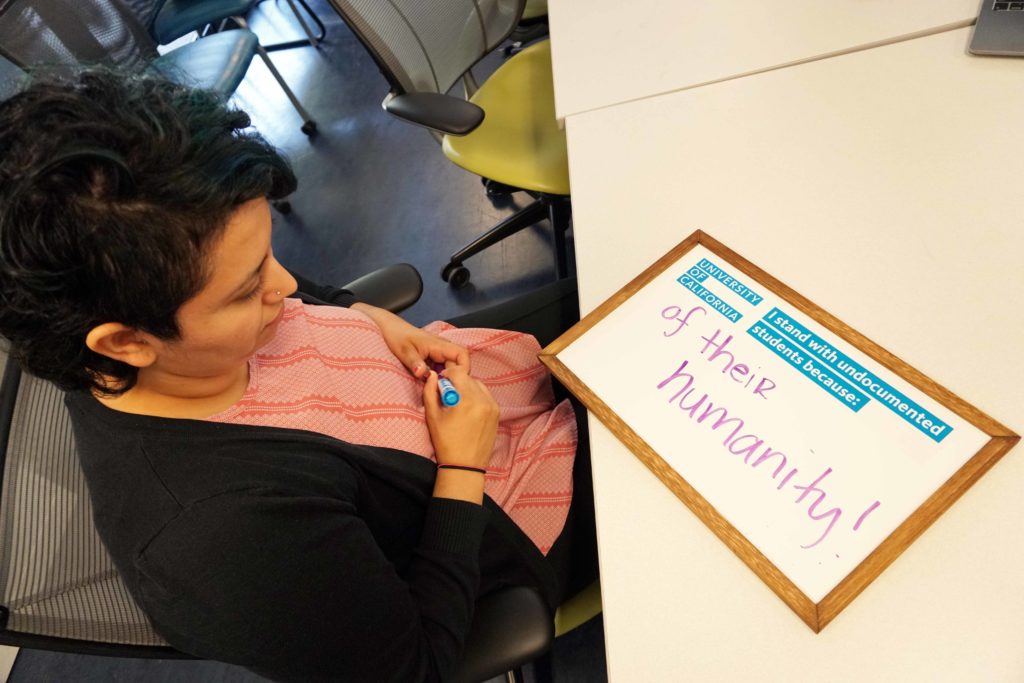 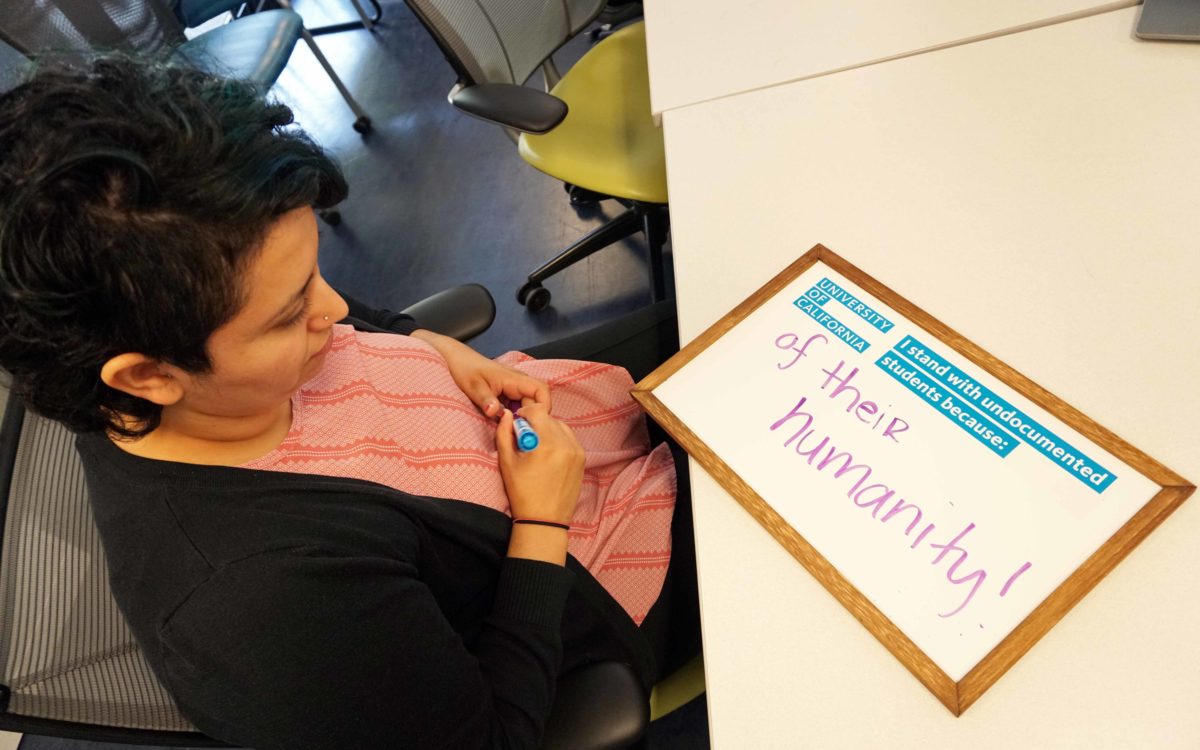 Credit: Andrew Reed/EdSource
Valeria Chavez-Ayala, an academic counselor at UC Berkeley's Undocumented Student Program, writes on a whiteboard in support of undocumented students as part of a University of California awareness campaign.

Credit: Andrew Reed/EdSource
Valeria Chavez-Ayala, an academic counselor at UC Berkeley's Undocumented Student Program, writes on a whiteboard in support of undocumented students as part of a University of California awareness campaign.

The University of California will take its fight to protect immigrant students all the way to the U.S. Supreme Court next week.

The court hearing is the final match over Deferred Action for Childhood Arrivals, or DACA, which currently provides temporary protection from deportation and permission to work for about 660,000 people who came to the U.S. as children, according to the most recent data from U.S. Citizenship and Immigration Services. Just over 200,000 DACA recipients live in California, by far the largest number of any state, according to the Migration Policy Institute.

After the Trump administration announced a decision to end the protection in 2017, the University of California and several other plaintiffs sued to keep it in place. Several lower courts have upheld UC’s lawsuit and it was eventually appealed to the Supreme Court. The case will be heard on Nov. 12, with a final decision expected by June 2020.

“What I hope the court understands is that behind the legal arguments are 700,000 lives who will be affected, in a damaging and frankly unnecessary way,” said UC president Janet Napolitano. “So what the Supreme Court does has a real human impact.”

Napolitano authorized DACA in 2012 while serving as secretary of homeland security in the Obama administration. Under her leadership, the University of California has argued that the Trump administration’s decision to end the program was illegal, arbitrary and without justification.

“These students are not a risk to our communities. Many of them are leaders on our campuses. The employees are making positive impacts for the university,” said Carrie Rieth, assistant vice chancellor and chief counsel of external affairs for the California State University system.

President Donald Trump has said that the Supreme Court should end DACA and that he believes that Congress will come up with immigration legislation to replace it.

“If the Supreme Court upholds DACA, it gives the President extraordinary powers, far greater than ever thought,” Trump tweeted in October. “If they do what is right and do not let DACA stand, with all of its negative legal implications, the Republicans and Democrats will have a DEAL to let them stay in our Country, in very short order.”

If students’ DACA status is rescinded, Napolitano said they would not only lose their ability to be legally employed, but they would also live in fear of deportation.

“As we know in the current administration, ICE hasn’t set real priorities in terms of who it enforces the law against, so they would treat a young person who grew up in this country, is going to school and has no criminal record the same as they would somebody who has been convicted of a violent crime,” Napolitano said.

The California State University trustees and the California Community Colleges Board of Governors signed on to a brief filed in the Supreme Court by 165 colleges and universities nationwide in favor of continuing DACA.

“We have thousands of students and hundreds of employees that are benefiting from DACA,” said Carrie Rieth, assistant vice chancellor and chief counsel of external affairs for the California State University system. “These students are not a risk to our communities. Many of them are leaders on our campuses. The employees are making positive impacts for the university.”

DREAMS HAVE NO BORDERS

Undocumented students and immigrants are our loved ones, a part of our community, and have just as much of a right to an education as a citizen.#ucdaca #immigrantsmakeamericagreat #homeishere #uc4daca #scotus @UCSanDiego @UofCalifornia pic.twitter.com/yUDa0ZX6sU

A national survey of a sample of DACA recipients conducted in August and September 2019 found that the vast majority were employed or in school and 93 percent of those currently in school said that because of DACA, they “pursued educational opportunities that [they] previously could not.”

A recent graduate of CSU Dominguez Hills, Alejandro Campos, said having DACA changed his life, allowing him to work and go to college.

“I think education could be my only safe space,” Campos said. “I think the more educated I get, the more doors open.”

Campos is 34; he came to the U.S. from Mexico with his family when he was about 8 years old and overstayed his visa. He didn’t realize he was undocumented until he was a senior in high school and tried to join the Army.

After Campos received DACA status, he was able to work as a waiter and bartender to support himself and he enrolled in college. He graduated in June from CSU Dominguez Hills with a bachelor’s degree in kinesiology. He is now preparing to apply for a master’s program. His dream is to become an occupational therapist.

Campos says if he loses his DACA status, it wouldn’t just hurt him, but also his daughter, who is now 11.

“I haven’t been to Mexico since I came here. I don’t think I have a life over there,” Campos said. “I have my daughter here. I’m her No. 1 provider. She means everything to me. I think that’s the reason I continue to push and go to school because I don’t want her to go through the things I did. Every time I don’t want to study late at night, I remind myself, I’m doing this for a purpose.”

“Some students feel like, ‘Because it’s up in the air, should I pause my time at the university and go work and earn money in different ways so I can save and help my family no matter what happens?’” Iglesias said.

One incoming freshman Iglesias spoke with is set to begin college classes in January, but because of the uncertainty of what will happen with DACA, her parents are fearful about her filing a California Dream Act application that will allow her to receive financial aid and are doubting whether she should even go to college.

We stand with undocumented students, members of this vibrant, smart, caring and diverse #UCDavis community.#UCDACA #HomeisHere #SCOTUS #DACA With @andrewhargadon, @2winsdad and the rest of our institute team ❤️ pic.twitter.com/CXVDDROoms

The University of California has started a social media campaign asking people to sign a pledge supporting DACA and to share photos of themselves with small whiteboards or chalkboards with a sentence beginning “I stand with undocumented students because….” UC Davis Chancellor Gary S. May finished that sentence with the words “…they deserve justice and the opportunities all Americans enjoy.”

“We really want to make it clear that we support all of our undocumented students regardless of whether they have DACA or not,” Iglesias said. “This is just an example of the anti-immigrant climate that is in place right now, that is even beyond DACA.”

Iglesias said on the day of the Supreme Court hearing, the Undocumented Student Program at UC Berkeley will be providing extra hours of drop-in mental health counseling. Staff also are organizing a presentation about immigrant rights and a workshop to help students and staff renew their DACA status. Iglesias said university attorneys are recommending DACA recipients renew their protected status now, if it is set to expire before March 2021.

The leaders of all three California college and university systems also have written to members of Congress, asking them to support legislation to provide permanent protection for immigrants who were brought to the United States as children.

Even if the Supreme Court allows DACA to be terminated, California will still allow undocumented students who have attended at least three years of high school in the state and earned a California high school diploma or equivalent to attend colleges and universities, to pay in-state tuition and to receive state financial aid.

“The outcome of the decision will not have an impact on our ability to educate any individual, nor will it have an impact on the ability of the state of California to fund these students,” said Rieth. “No matter what the outcome is, we will continue to provide and vigorously pursue our commitment to advance and extend knowledge and learning to all Californians.”