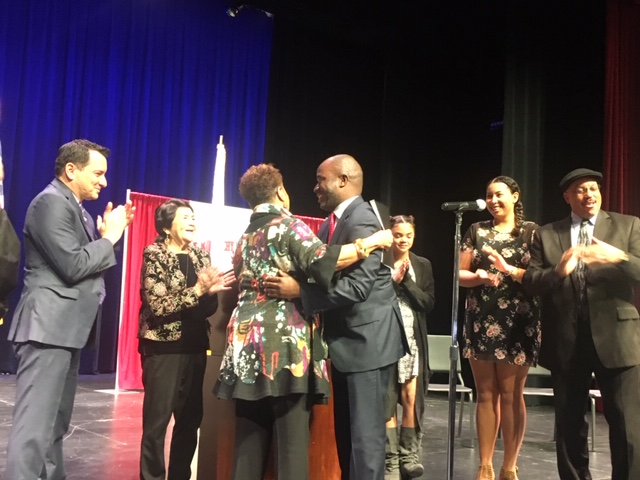 Tony Thurmond was sworn in Monday morning as state superintendent of public instruction at a ceremony attended by several hundred people in the auditorium of C.K. McClatchy High School in Sacramento.

For a video of the event, go here.

After taking the oath of office administered by retired Superior Court Judge Gordon Baranco, Thurmond said in his inaugural speech, “I could have ended up in state  prison. Instead I ended up as state superintendent of public instruction. That is why it is so important to break the school to prison pipeline.”

He reflected on the fact that the state schools chief does not have direct responsibility for what happens in districts around the state. “It’s a hard job,” he said.  “This is the kind of job when you get all the blame for what goes wrong, but you don’t have the resources to fix what needs to be fixed.

“I accept those challenges,” he said.

But then to the audience he said, “I need your help. Here is my ask.  Stand with me when we fight for our kids.  It’s easy to tear down and destruct. I’ll take your criticism, I’ll take your best shot, but lets not criticize our children.”

“If they get kicked out of school, they can’t learn,” he said. “Let’s make sure we keep kids in school. Let’s keep them close, and make sure they get a great education.”

He said that addressing the teacher shortage was critical. “We can’t close the achievement gap unless we have quality teachers in every classroom,” he said.  He also touched on the the issue of teacher pay that is fueling labor conflicts in several districts around the state, including Oakland, in the district he represented until recently.  “We have to make sure we provide quality compensation and support to our teachers and our classified staff and all the educators who support our kids,” he said.

Thurmond, by profession a social worker who worked for many years with marginalized young people, won the statewide position in a tough race against Marshall Tuck. The race was only settled weeks after the Nov. 6 election based on millions of votes that had yet to be tallied after the Election Day count.

He was endorsed by the California Teachers Association and other labor unions, as well as by the California Democratic Party. He won election by a narrow margin of 1.8 percentage points, but ended up decisively head in the actual vote count — by 187,000 votes.

He acknowledged how tough the race was. “It took thirty years off my life to get here,” he said.

Thurmond, who served for four years in the Assembly representing Richmond, Oakland and other East Bay communities, was introduced by the chairs of several Legislative caucuses.

Assemblywoman Shirley Weber, D-San Diego, the new chair of the Legislative Black Caucus, said Thurmond “not only has the intellectual understanding but a personal life understanding of the issues” faced by California’s children.

State Sen. Maria Elena Durazo, D-Los Angeles, the chair of the Legislative Latino Caucus, told Thurmond in Spanish, “Remember your roots,” a reference to Thurmond’s mother, who was an immigrant from Panama.

Thurmond’s mother, a single parent, died when he was 6 years old. Sacramento Mayor Darrell Steinberg noted that Thurmond was California’s second African-American state schools superintendent, after Wilson Riles, who served three terms after first being elected in the early 1970s.

Steinberg pointed out that like Thurmond, Riles was also an orphan at an early age.

Dolores Huerta, the legendary leader of the United Farm Workers, led the audience in a chant of “Que Viva Tony Thurmond!”

State Sen. Connie Leyva, D-Chino, head of the Legislative Women’s Caucus, quoted Nelson Mandela, as saying, “Education is the most powerful weapon we can use to change the world.”

Thurmond, she said, was born for the job of state superintendent. “He may not have known that in his head, but he knew it in his heart,” she said.

Rep. Barbara Lee, D- Oakland, said Thurmond’s election represented a “dawn of a new day for our children.” She noted that both she and Thurmond were social workers, and that she shared with him a “devotion to be an advocate for all of our children, especially the most vulnerable.”

“You are our hero,” she said. “As the millennials say in my district, you are going to stay woke for all of our children.”

Now Thurmond has the challenge of using a high profile position that has few actual powers to help improve the  improving academic outcomes — and by extension the life prospects — of millions of California children.