To pass parcel tax, Los Angeles Unified will need to break with history 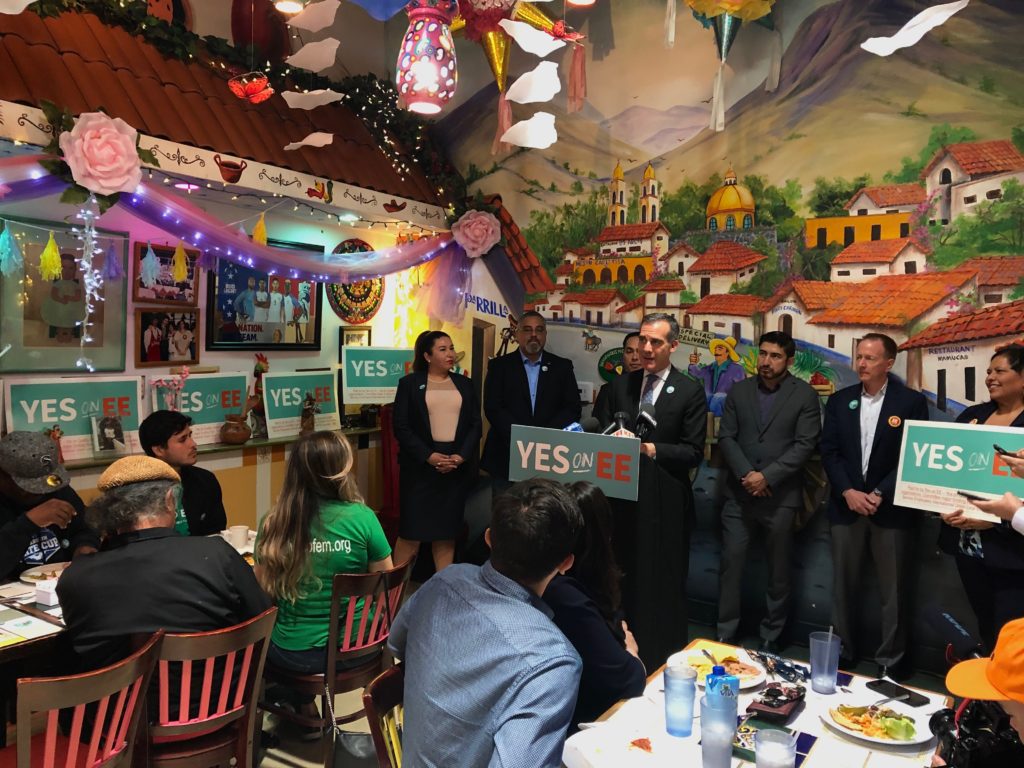 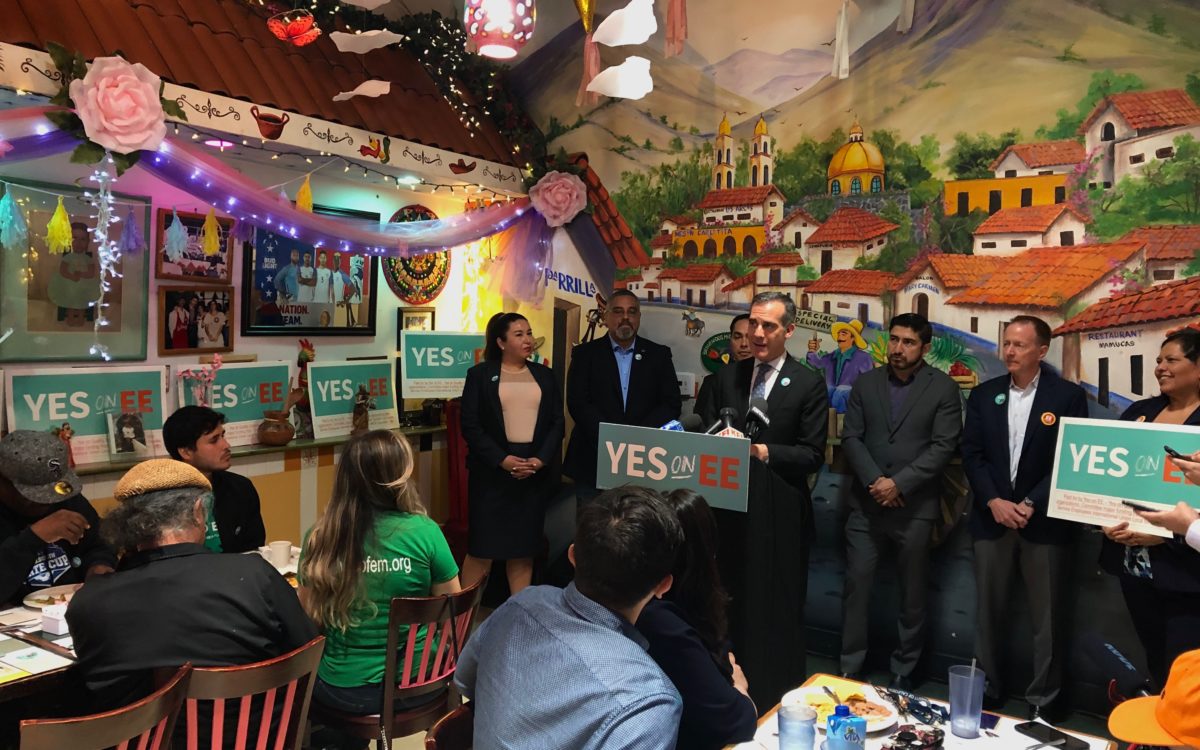 Credit: Michael Burke
Los Angeles Mayor Eric Garcetti speaks in support of Measure EE at a luncheon in Boyle Heights on May 31.

Credit: Michael Burke
Los Angeles Mayor Eric Garcetti speaks in support of Measure EE at a luncheon in Boyle Heights on May 31.

Los Angeles Unified leaders hope to make history on Tuesday when the district asks voters to approve a parcel tax that would provide major relief to the financially strapped school system.

History, however, is not on the district’s side.

Only a small portion of school districts in California — fewer than 13 percent — have ever passed a parcel tax, which requires two-thirds voter approval. What’s more, those districts are generally small, high-income districts and are heavily concentrated in the Bay Area.

Passing Measure EE would be a significant feat that runs counter to that trend: Los Angeles Unified serves a largely low-income student population and is by far the biggest in the state and the second largest in the country.

If approved, it would be the first parcel tax in the district.

District leaders became optimistic after January’s weeklong teachers’ strike placed a spotlight on the financial needs of LAUSD. The school board commissioned a survey the following month, which showed that more than two-thirds of likely voters would support a 16 cents per square foot parcel tax under a rage of scenarios.

The measure — whose supporters include United Teachers Los Angeles, the California Charter Schools Association, L.A. Unified Superintendent Austin Beutner and Mayor Eric Garcetti — is projected to raise about $500 million annually for both traditional public schools and charter schools within the district.

However, several key business organizations, including the Los Angeles Chamber of Commerce, decided to oppose the tax, and have launched vigorous campaigns to defeat it.

The district last attempted to pass a parcel tax in June 2010, when the measure was easily defeated, with less than 53 percent voter support.

If Measure EE is successful it would be unprecedented, said Eric McGhee, a research fellow at the Public Policy Institute of California (PPIC), an independent research and policy organization.

“If one were to pass in LAUSD, it would instantly change the nature of parcel taxes around the state,” McGhee said. “There would just be so many more students, suddenly, who would be covered under a parcel tax than there are now.”

Parcel taxes first appeared on ballots in California in 1983, a byproduct of Proposition 13, the 1978 ballot measure that limited property tax increases in California. As of November 2012, 124 out of the nearly 1,000 districts in the state had passed at least one parcel tax, according to a 2013 EdSource analysis. Since that analysis, about 90 districts have successfully passed parcel taxes, according to Ballotpedia and EdData, but almost all of them were renewals of expiring parcel taxes. That includes several parcel taxes that were approved by voters last November.

For those districts who actually put a parcel tax measure on the ballot, more than half have historically gotten voter approval. Last November, an even higher percentage — 10 out of 13 school parcel taxes on ballots around the state — were approved. But many districts never try to get voter approval because local leaders know or fear they will not garner the votes they need for passage.

“The Bay Area is sort of like the parcel tax mecca,” said Bree Lang, an assistant teaching professor at UC Riverside, who has researched parcel taxes.

The rare districts outside of the Bay Area that have passed a parcel tax, such as South Pasadena Unified and Manhattan Beach Unified in Southern California, are typically located in higher-income areas and in communities highly engaged in their schools.

In Los Angeles Unified, 8 in 10 students are eligible for free or reduced-price meals.

Though less common, parcel taxes have been of use to some school districts with substantial low-income student populations. A 2013 EdSource report showed that nearly one in five districts that had approved a parcel tax had student enrollments where more than half qualify for free or reduced-price meals.

“Income and wealth matter,” Lang said. “They’re not the whole story, because there are exceptions where lower-income districts can pass taxes. They just don’t do it very often.”

With a total enrollment of more than 600,000 students, Los Angeles Unified would replace San Francisco Unified — with a total enrollment of about 60,000 students — as the biggest school district to have passed a parcel tax if Measure EE is successful. San Francisco Unified currently has a parcel tax in effect that was approved by voters last year.

The district had never previously seen that type of public support for investment in the district, board president Mónica García said in an interview with EdSource.

If Measure EE were to pass, the district has pledged to use the money it raises toward teacher salaries, reduced class sizes, more support staff and improved school programs.

García said consideration was given to putting Measure EE on the ballot in 2020. She said the board opted to schedule the election for June in light of the current level of public support it has seen and its desire to have the funds available for the next academic year, when the district will have to deliver on promises it made to settle the teachers’ strike.

The district and UTLA approved a contract at the end of the strike that gave teachers a 6 percent raise and committed the district to reduce class sizes and hire more support staff. Concerns have already been raised about whether the district will be able to afford to pay for what it promised in the contract.

The Measure EE money could be available as soon as January if voters approve it, García said.