Teachers mobilize in Los Angeles, but pathway out of strike is murky 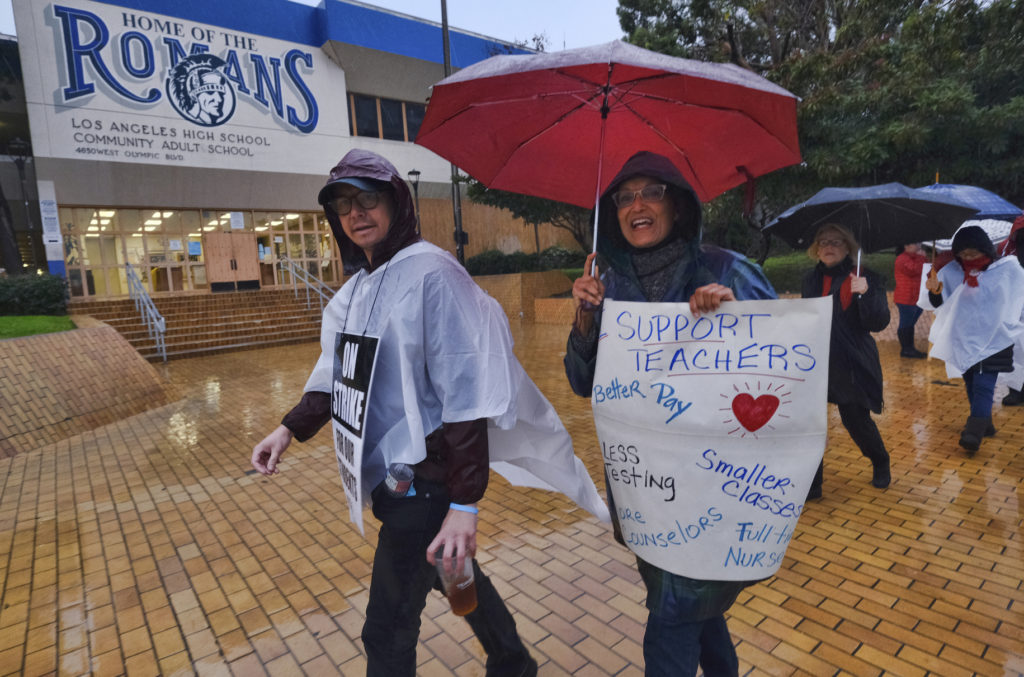 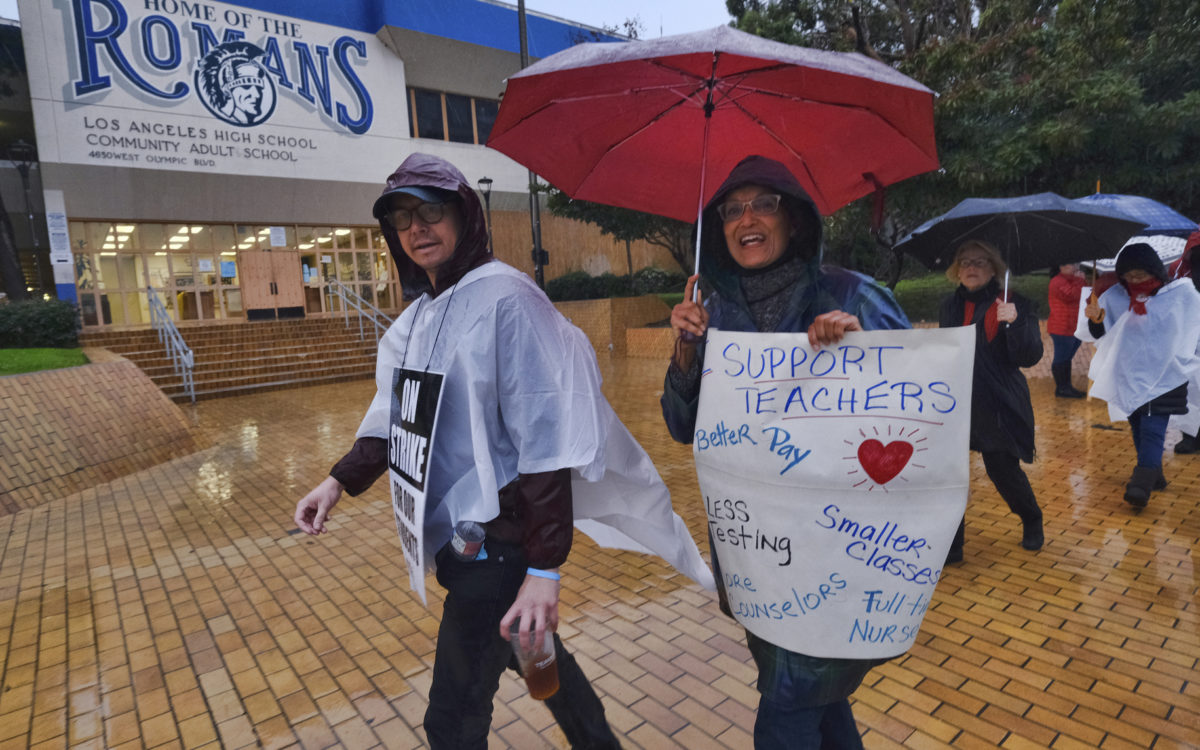 “We are in a battle for the soul of public education.”

That message was at the heart of the emotional statement by Alex Caputo-Pearl, president of United Teachers Los Angeles, in announcing the strike of teachers in Los Angeles Unified, by far California’s largest district.

Caputo-Pearl appeared to be near tears as he described students he had taught and how they were depending on their schools to provide them with the programs and personnel they needed to succeed.

The Los Angeles Unified strike is another indication that educators here are linking their labor struggles to those of the “Red for Ed” movement that has rocked several other states over the past year. The movement got that moniker because of the red T-shirts worn by teachers in those states.

The strike is a product of a number of cross currents, both local and national, bringing teachers to the point where they felt that had no other option but to strike.

After years of feeling blamed for all the ills of the public schools, especially during the No Child Left Behind era, the tide has turned to be more favorable to teachers, and a recognition that a student’s performance is based on a lot of factors, including many outside the classroom. A recent NPR/Ipsos poll shows extremely strong support for a teacher’s right to strike, among both Republicans and Democrats, and for improving teacher pay.

The issue of pay has reached crisis proportions in many parts of California, especially in major metropolitan areas like San Francisco and Los Angeles, due to rising housing and other costs. In many of these districts, teachers are increasingly unable to afford to live in the districts where they work.

The outflow of students to charter schools has also exacerbated labor conflicts. It may not be coincidental that the two districts with among the largest number of charter schools — LA Unified and Oakland Unified — are also the ones experiencing the most severe labor tensions.

Despite California having among the strongest teachers unions in the nation, teacher strikes among the state’s nearly 1,000 districts over the last two decades have been exceedingly rare. The most recent one was in Calaveras Unified in Gold Country, with less than 3000 students.  Others over the past decade were in Yuba City Unified, north of Sacramento, in 2016, in Capistrano Unified in Orange County in 2010, and Hayward Unified in the San Francisco Bay Area in 2007. These districts had a combined enrollment of under 90,000 students, compared to the nearly 600,000 in Los Angeles.

A sign of the UTLA strike’s national significance is that the leaders of the two largest national teachers unions, Randi Weingarten, president of the American Federation of Teachers, and Lily Eskelsen Garcia, president of the National Education Association, came to California to help kick off the strike and walk picket lines.

“Last year public school educators in West Virginia, Oklahoma and Arizona, and charter school educators in Illinois, walked out for their kids,” Weingarten said. “Now, in L.A., a big, wealthy city, educators are doing the same, and for the same reasons. They are tired of the pattern of starving our schools and our students of the resources they need for their success.”

The big difference is that most of the states where teachers have walked out and demanded higher wages and better working conditions were heavily Republican states, including Arizona, West Virginia, Oklahoma, Kentucky, and North Carolina, all of which have laws intended to make union organizing more difficult.

In California districts set salaries based on negotiations with teachers unions. That means that unlike a private corporation, districts don’t have “profits” they can dip into, and it is far from clear where Los Angeles would get additional funds to meet labor’s demands. The district has limited options for how to do so. Efforts in recent years to put a parcel tax — a tax on real estate — on the ballot have floundered, because of the unlikelihood that it would get the two-thirds vote required for passage.

For precisely that reason, as recently as last July, the L.A. Unified school board rejected a proposal to put a parcel tax on last November’s ballot, despite the district facing huge budget shortfalls in the coming few years.

Funds to most districts in California come largely from the Legislature, and the amounts going to schools is determined by complicated formulas set by, among others, Proposition 98, an initiative approved by voters in 1988, as well as the Local Control Funding Formula, approved by the Legislature in 2013.

It’s a fact that California lags behind most states in how much it spends on its students. But while school funding suffered an enormous hit during the Great Recession, under Gov. Jerry Brown’s watch, funding has been restored, and is now at record levels. Funds authorized by Prop. 98 from the state’s general fund have soared from $49.7 billion in 2010-11 to $80.7 billion in new Gov. Gavin Newsom’s proposed budget for next year.

In addition, Los Angeles Unified has been the biggest beneficiary of funds from the Local Control Funding Formula. Based on the large number of low-income children, English learners, homeless and foster children, the district is receiving an extra $1.1 billion this year.

But these funding increases have been unable to prevent the district from extreme financial distress, as a result of numerous factors, including declining enrollments, expensive health benefits, pension and other retiree costs, as well as the impact of the outflow of revenues to charter schools.

Now that the strike is a reality — after nearly two years of fruitless negotiations between the unions and three superintendents — how it will be resolved is far from clear. To do so will present formidable obstacles to both the union and current Superintendent Austin Beutner, a non-educator who has been on the job for less than a year and is reviled by union leaders.

The strike also presents a challenge for Newsom and State Superintendent of Public Instruction Tony Thurmond.  In seems inevitable that  Newsom and Thurmond, both endorsed by UTLA and the California Teachers Association, will be called upon to play some role in resolving the conflict.

In fact, Beutner last week called on Newsom to do just that. “We need his help to resolve this,” Beutner said last week. “We’d like the governor to step in, bring the parties together, keep us in a room, lock the door and throw away the key if he has to, so we can reach a resolution.”

But within hours of the strike Newsom issued a statement that urged everyone to get back to the negotiating table and find “an  immediate path forward” to resolving it.  But he conspicuously made no mention of his getting involved in doing so.

Instead, he referred to the budget he released on Jan. 10 for the coming fiscal year, and the additional funds he has proposed for various aspects of preK-12 education that he said should help the district financially.

The strike, he said, is “disrupting the lives of too many kids and their families.”

Having hundreds of thousands of students out of class in the middle of the school year, or in classes where not much if any instruction is happening, would not be an auspicious way for either Newsom or Thurmond to kick off their plans to improve education outcomes for all California students.

At stake, as Caputo-Pearl suggested, is the future of public education not only in Los Angeles but in other districts across the state.  How the strike is resolved in L.A. will set a marker for brewing conflicts in other districts.  At this moment, as teachers march outside their schools on rain-soaked streets, there is no clear path forward to getting them, and their students, back to class.

Update; This report was updated on Jan. 14 at 2 p.m. to include comments from Gov. Newsom.