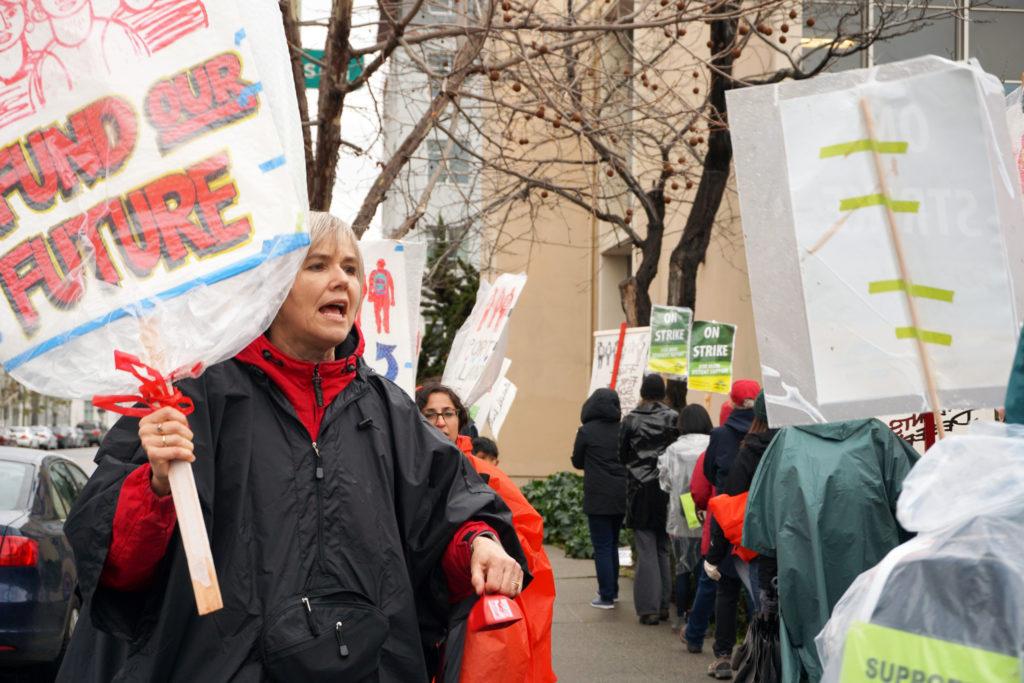 Loss of funds means that district could have less to spend on strike settlement. 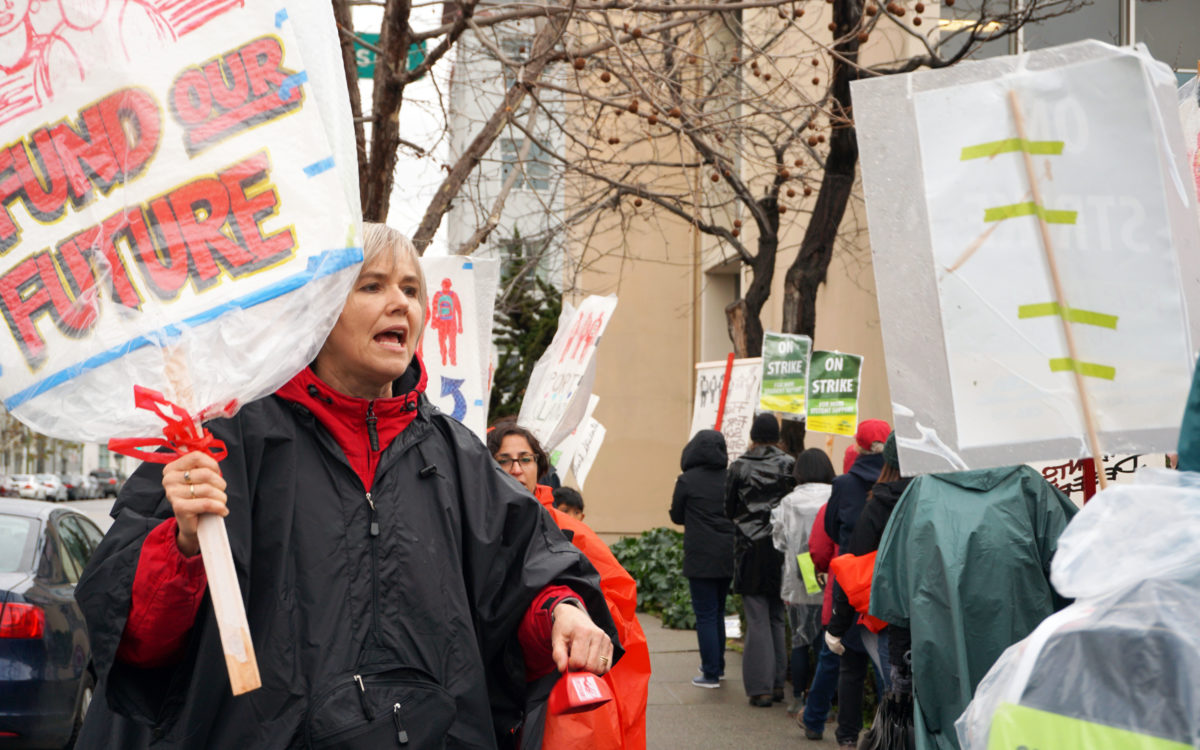 As the Oakland Unified teachers’ strike enters its fifth day, the costs of the strike are eroding some of the funds that the financially struggling district could have used to meet teacher demands for higher salaries, smaller class sizes and more extensive support services.

Oakland Unified is losing about $1 million for each day teachers are out of work and students are out of classes, according to both the district and estimates provided to EdSource by School Services of California, a Sacramento-based consulting firm that provides financial and other advice to many school districts.

The losses are mainly because the district receives the bulk of its funds from the state based on what is called “average daily attendance,” or ADA. According to School Services of California, the district receives $60.63 a day for each child in attendance through the Local Control Funding Formula, the system of funding championed by Gov. Jerry Brown that was approved by the state Legislature in 2013.

Only 6 percent of the district’s approximately 35,000 students have shown up at school during the strike, which means the district will not get state funds for the 94 percent of students who are out of school, according to district officials. 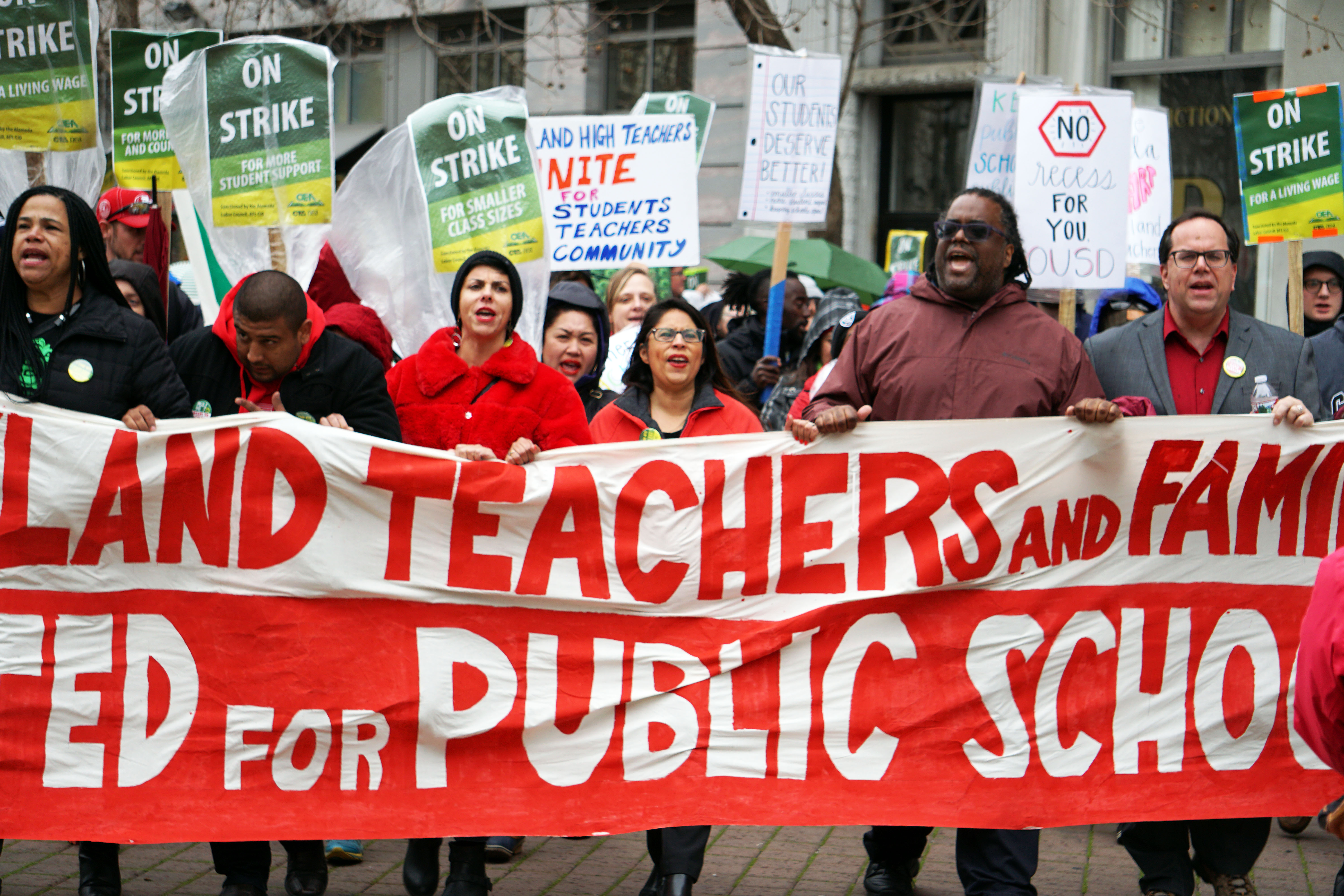 “Our numbers show the impact that the student absences are having on the district in support of our teachers,” Superintendent Kyla Johnson-Trammell said Tuesday. “It lends greater urgency to the need to settle our contract negotiations with the Oakland Education Association.”

The union representing the teachers says even fewer students — by its estimates 3 percent — have been in school during the strike.

Union officials acknowledged that the loss of funds to the district could lead to more budget cuts — directed, they hoped, at programs and services that will not affect students in the classroom.

“If the district didn’t want to incur these costs, they shouldn’t have dragged out negotiations for two years and slow-walked talks since the strike began,” said Ismael Armendariz, the first vice president of the Oakland Education Association, representing over 3,000 teachers and other employees. “The ultimate settlement will probably now require deeper cuts in central office personnel and outside consultants, since the goal of the union and the community is to get more resources into the classroom.”

Talks continued late into the evening Tuesday with Tony Thurmond, state superintendent of public instruction, acting as a mediator, and resumed Wednesday.

“At this time, both sides are communicating and trying to reach an agreement that each feels is fair,” Thurmond said Wednesday morning. “Talks have been moving in a productive direction, and I don’t expect that momentum to stop.” 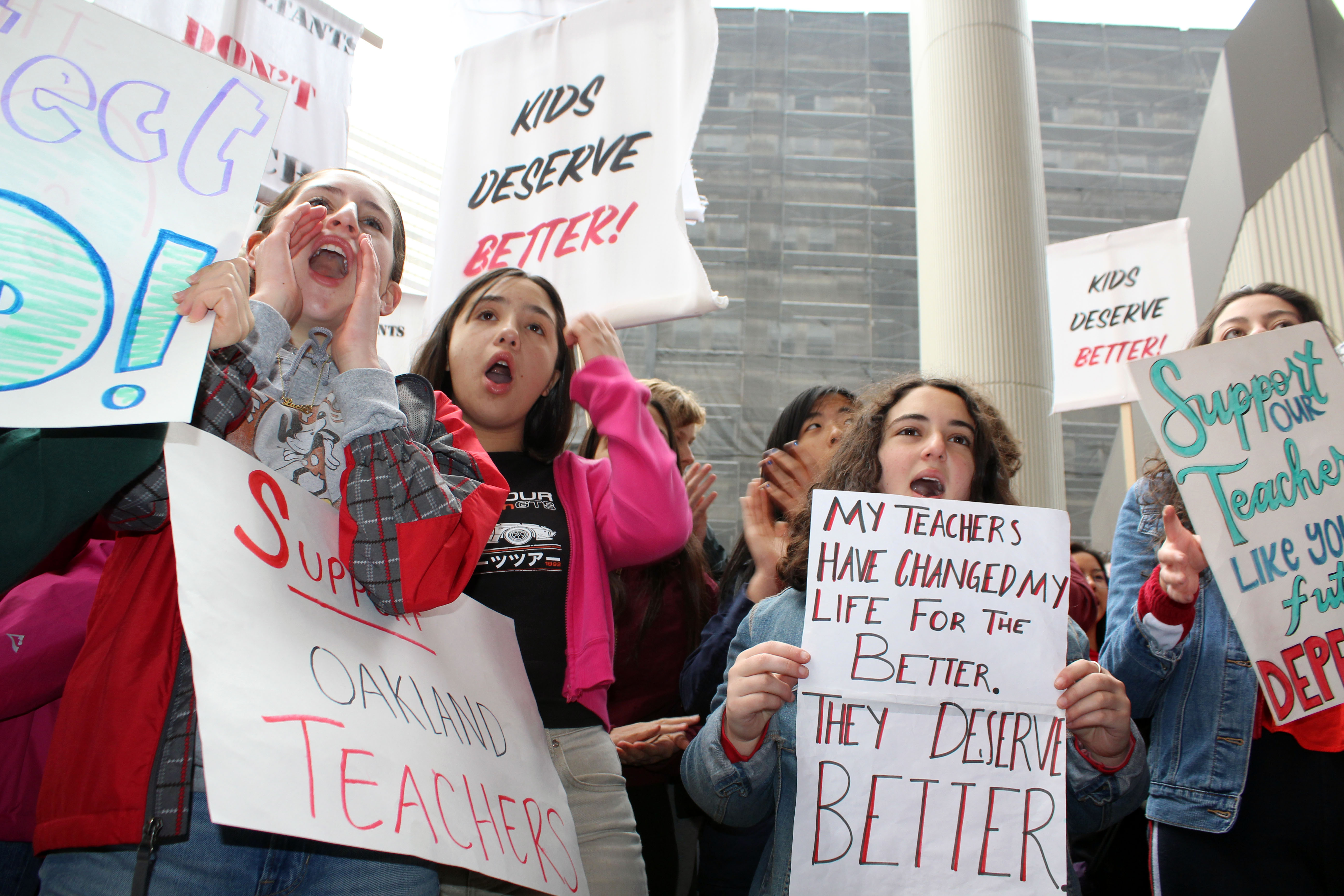 The union has not provided estimates of how much it thinks could be saved by cutting consultant contracts and central office staff.

“The loss of ADA is significant, but there are also offsetting factors, such as the money not being spent on teacher salaries during the strike,” said Karen Monroe, Alameda County superintendent of schools, who must by law sign off on the district’s annual budget. “Regardless, the district must make cuts and those cuts need to be focused on Oakland’s budget shortfall and their deficit spending.”

Underscoring the tough math of labor disputes involving teachers in California, during last month’s weeklong strike in Los Angeles Unified, by far the state’s largest district, Superintendent Austin Beutner estimated that each day students were out of the classroom cost the district about $15 million.

The Oakland school board is set to vote on about $20.2 million in cuts to the district’s 2019-20 budget Wednesday night, along with $1.6 million in cost-savings and revenue generation, which are expected to help fund teacher raises, class size reductions and other student supports. The district says it’s unclear how the loss of funding due to the strike will affect the overall budget, but it hopes to resolve the strike soon.

The district typically receives just over $2 million a day in state funds based on student attendance. That also includes funds it receives from the state lottery, as well as funding known as “mandated block grant” funds.

As Monroe noted, the loss of these funds during the strike is offset by the substantial amount the district is “saving” because it does not have to pay its teachers who honor the picket line during the strike. If all Oakland teachers were striking, the district saves approximately $1.01 million a day in wage costs, according to School Services. However, the union says about 96 percent of its members are striking, which would lower the “savings” to about $972,716 per day. 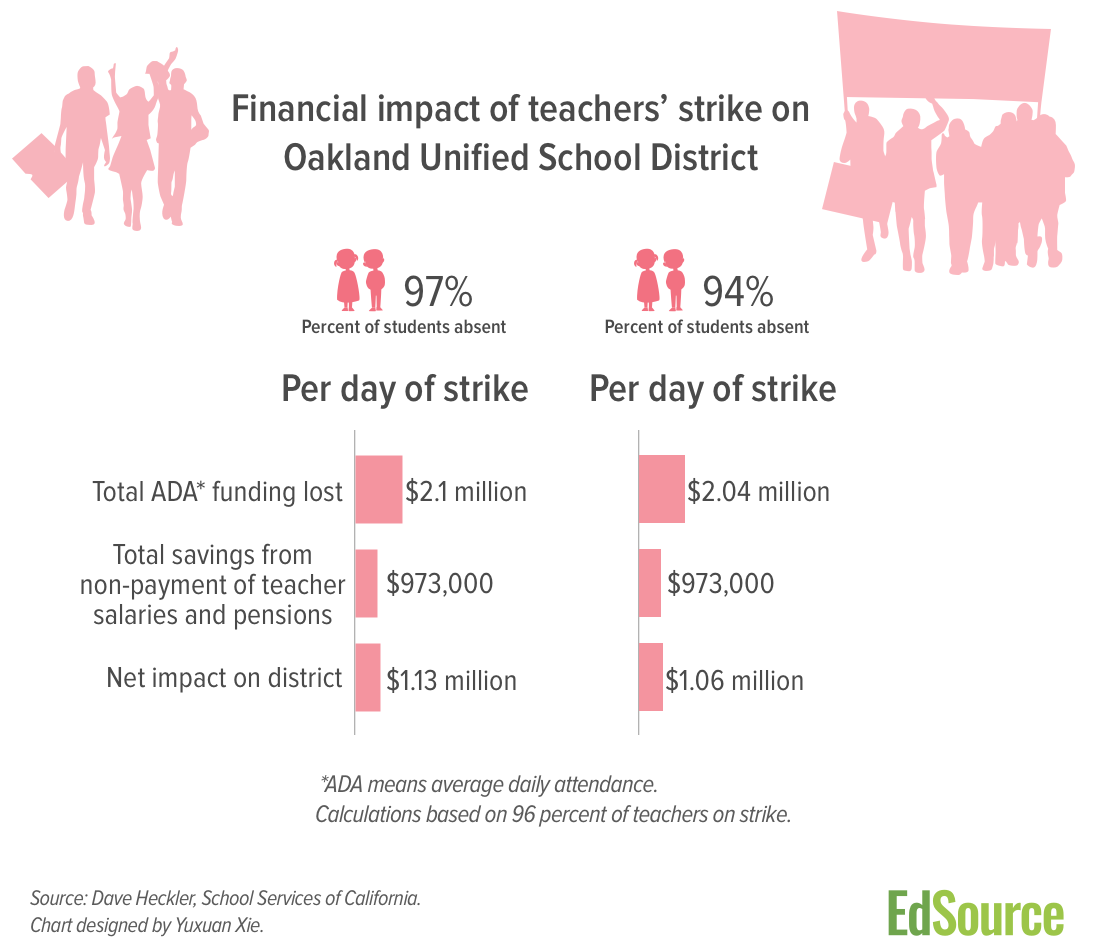 These losses do not include the cost of hiring substitute teachers for the duration of the strike. Nor does it take into account the savings the district may have realized from other non-management, non-teaching staff known as “certificated staff” such as nurses, counselors or librarians who are also out on strike.

Monroe said the district cannot approve any agreement that would jeopardize its fiscal solvency.

“I would not say no, unequivocally, to the proposed 12 percent increase, but I would not be able to approve any agreement that puts the district in further fiscal peril,” she said.

“An acceptable agreement is dependent on a number of factors,” she said. That would include the cuts the district is willing to make, along with whether what the district agrees to represents an ongoing financial commitment or is a one-time expenditure.

Teachers and their supporters planned to protest before the board meeting in an attempt to shut it down. But board member Jumoke Hinton Hodge said in an open letter the community on Wednesday that the board needs to vote on several key issues.

This story was updated on Feb. 27 at 9:30 a.m. to include a quote from Tony Thurmond,  state superintendent of public instruction and at 2:15 p.m. on a school board member’s open letter for the board to meet Wednesday night.