Science gets hands on in summer STEM programs, but funding challenges remain 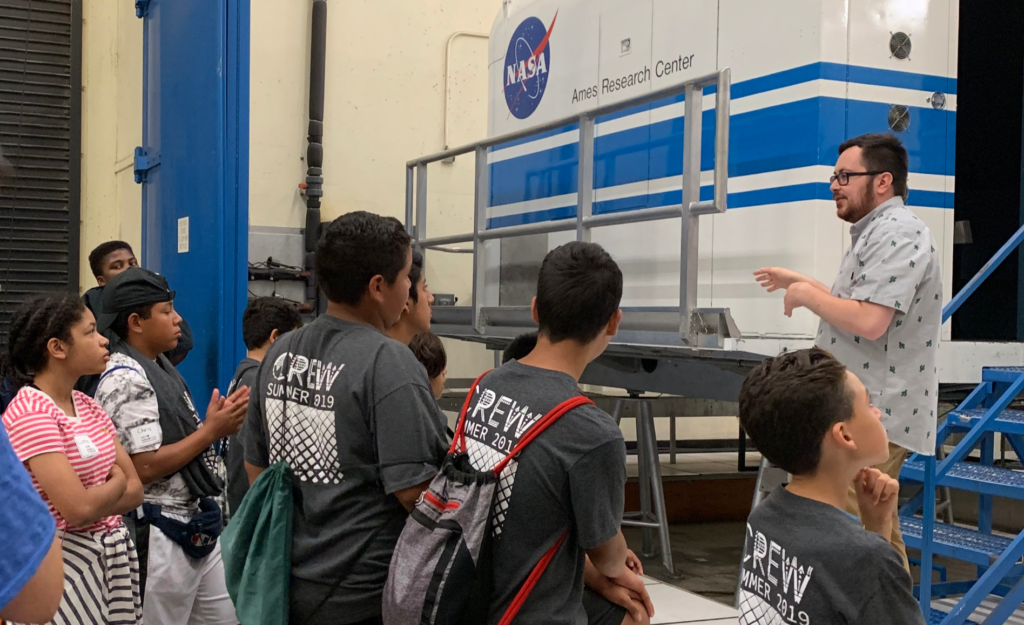 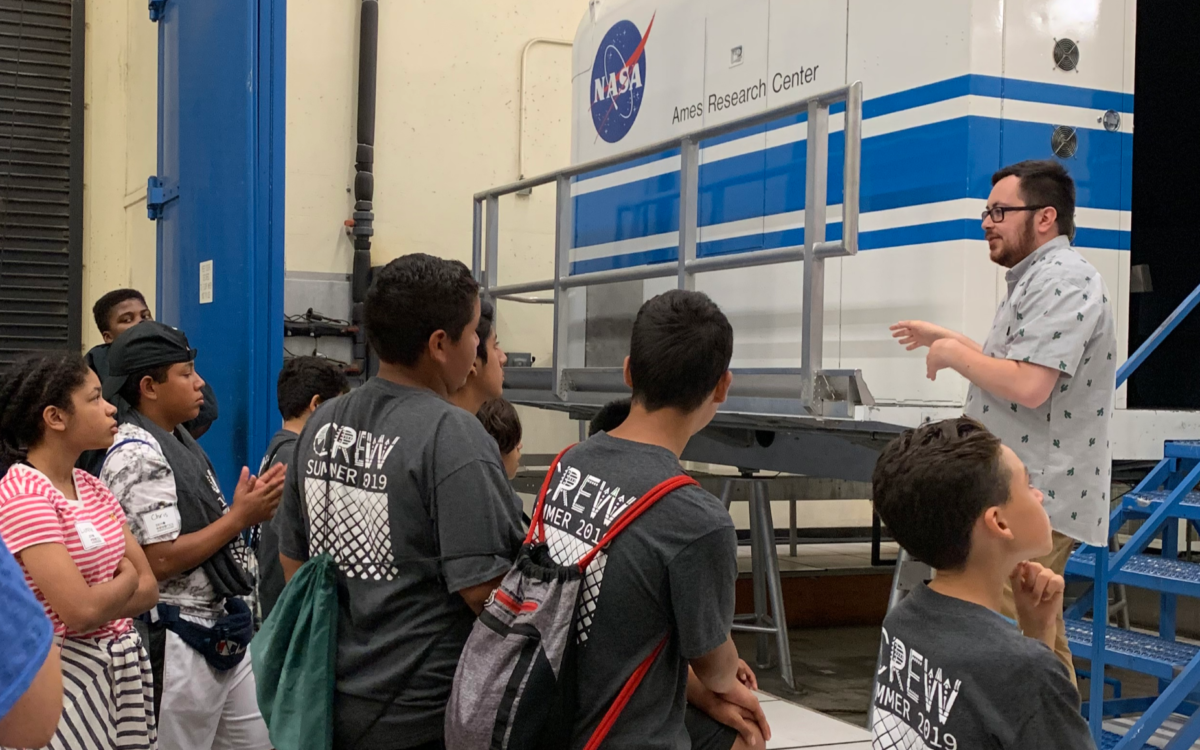 Fifty years after the first moon landing, students in California this summer are getting a taste of space life.

At Zero Robotics, middle school students gather in teams across San Jose for five weeks to design a code that will control a small satellite. The best code is then uploaded to the International Space Station where live astronauts judge a competition between the satellites programmed by students from around the country.

Zero Robotics is a nationwide summer program where students can participate in hands-on science, technology, engineering and mathematics (STEM) activities, like writing code for satellite races in space.

In California, it is one of thousands of summer and after-school programs that rely on funding through the state’s After School Education & Safety Program, which supports schools and districts that work with community groups to provide services and activities ranging from coding workshops to help with math homework to providing free meals to low-income students.

After-school and summer programs can charge fees to participating families. But by state law, programs that receive state or federal funding can’t turn away students who can’t afford to pay. The goal is to offer extracurricular experiences to students who may not be able to participate otherwise, but many programs struggle to serve more low-income families because the subsidy they get from the state covers only a portion of their costs.

STEM after-school and summer programs are trying to enhance learning outside of school hours by better aligning what they offer with how students are learning in school. Program organizers say that extracurricular support is particularly important as the state implements the Next Generation Science Standards: new academic standards that were adopted by the State Board of Education in 2013 and are being implemented gradually in schools throughout the state.

The Zero Robotics curriculum is free, which helps keep students’ costs down, said Mara Wold, from the Monterey County Office of Education, who helps oversee Zero Robotics in California. But staffing the program remains a challenge. “When you look at the need for staff to run a quality program, our field is having a hard time requiring and retaining high-quality staff,” she said.

Zero Robotics tries to get over staffing hurdles by recruiting college students who are interested in teaching or child development and who may be looking for part-time employment in those fields while they are taking classes.

Besides the state’s after-school program, the only other funding source for California’s 4,500 state-subsidized K-12 after-school and summer programs is the federal 21st Century Community Learning Centers grants, totaling $149 million for fiscal year 2019-20.

The After School Education & Safety Program was first implemented in the 2006-07 school year with a budget of $550 million, following a 2002 voter-approved initiative establishing it. Former Gov. Arnold Schwarzenegger heavily campaigned for the ballot measure before he was elected in 2003. For nearly a decade after that, California lawmakers did not increase spending on the program, even as costs, including the minimum wage, inched up across the state.

As a result of the budget increase, After School Education & Safety Program spending will go from $8.19 per student per day to $8.88 per student per day. That amount covers only a small portion of costs to run high-quality programs. According to data from the California AfterSchool Network, applicants for the most recent round of state and federal after-school program funding in California requested $133 million more in funding than was available. Advocates said that at least $9.75 per student per day is necessary to maintain quality programs throughout the state in 2019-20.

Even with the funding boost this year, “none of it will increase slots or numbers of kids,” said Michael Funk, director of the Expanded Learning Division at the California Department of Education. “It’s all going to increase the per-student rate.”

The additional money will help keep after-school activities running. But many after-school and summer programs still don’t have enough money to cover all their costs.

“You can do more STEM and coding, but it’s likely to be less effective if you don’t have funding to support quality,” said Davis.

Meanwhile, California is pushing to improve quality after-school and summer STEM programs through a network of 16 regional STEAM Hubs, which bring together leaders of programs offering science, technology, engineering, arts and math courses. The hubs offer workshops and support on topics such as using project-based learning to prepare instructors to integrate the arts and creativity into STEM lessons and activities.

In the STEAM Hub that Wold runs, which covers San Benito, Santa Clara, Santa Cruz and Monterey counties, staff are invited to participate in workshops on inquiry-based teaching methods, where students come up with questions about scientific phenomena to guide learning. They are also taught the “5E” instructional model, a component of the California Science Framework, in which students are asked to “engage, explore, explain, elaborate and evaluate” global challenges like climate change.

At Zero Robotics, a day camp, students meet for 15 hours per week at six different sites around San Jose, including schools and Boys & Girls Clubs. They meet and mingle with astronauts and aeronautical engineers. And this year, for the first time, they visited the world’s largest wind tunnel — an 80-by-120-foot structure that is big enough to test a commercial aircraft — located at the NASA Ames National Full-Scale Aerodynamics Complex in Mountain View, Calif.

“We’re here to support what’s happening in the core school day and provide opportunities that students might not receive,” Wold said. “The students may not choose to work in the aerospace industry, but that’s not the point. The point is for them to be exposed to STEM in a way that is meaningful and inspiring.”

But rising operational costs, including the minimum wage, are adding to the financial pressures on after-school and summer programs. California’s minimum wage will increase annually through 2023, when it will reach $15 per hour for nearly every employee in the state.

Julie Jarrett, director of expanded learning programs for the Butte County Office of Education, said STEM is a major component of after-school programs across the county. Activities focus on topics ranging from wind power or robotics to ranching and farming, to watershed management. Jarrett said her greatest challenge is hiring instructors who can work limited hours for minimum wage.

“We have awesome curriculum, our problem is finding the people to deliver it. And the Camp Fire made it harder,” she added, referring to the devastating 2018 California wildfire, which killed 86 people and destroyed or damaged nearly 14,000 homes. “Some of our instructors were displaced so we lost staff, which limits our ability to support students.”

For example, Jarrett said Butte County received funds to offer the Kids Code program — a state-funded grant program that brings free coding lessons to after-school programs — but was unable to staff it. In order to not lose the funding, she and a program manager at the county office went to a school site to teach the program themselves this past spring.

“We are doing the best we can with the funding we have,” she added.

Next year’s funding increase for the After School Education & Safety Program is still less than the $112.8 million that advocates and organizations supporting after-school programs sought for 2019-20, but Newsom originally did not include any budget increase for the program.

A bill introduced this year by Assemblywoman Wendy Carrillo, D-Los Angeles, initially aimed to increase funding for after-school programs by $112.8 million starting in 2019-20 and set up conditions for future funding increases, but it did not make it through the Legislature. It was turned into a two-year bill and will likely return next year.

Nationally, the Trump administration has threatened to eliminate the 21st Century Community Learning Centers program in each of his three budget proposals. However, each year spending for the program has increased. The House Appropriations Committee recently approved a bill to increase spending by $100 million for the 2020-21 school year, bringing the total to $1.3 billion.

“These programs help parents stay at work and help our communities be safe and that saves our society dollars on the back end,” said Davis of the California AfterSchool Network. “This is not just a ‘nice to have.’ It’s a vital community support.”