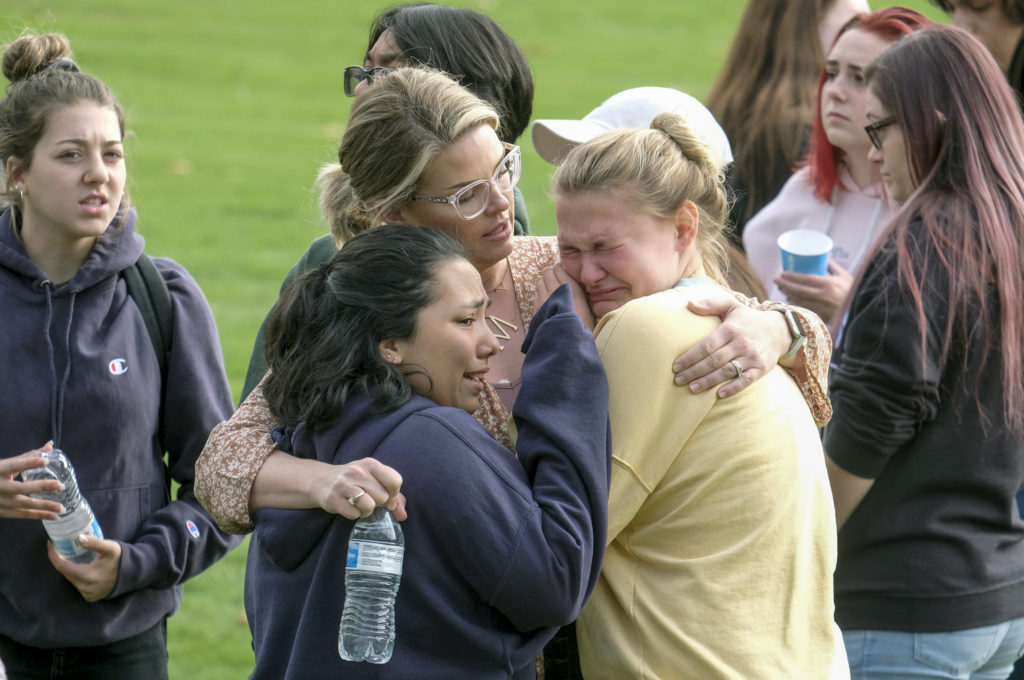 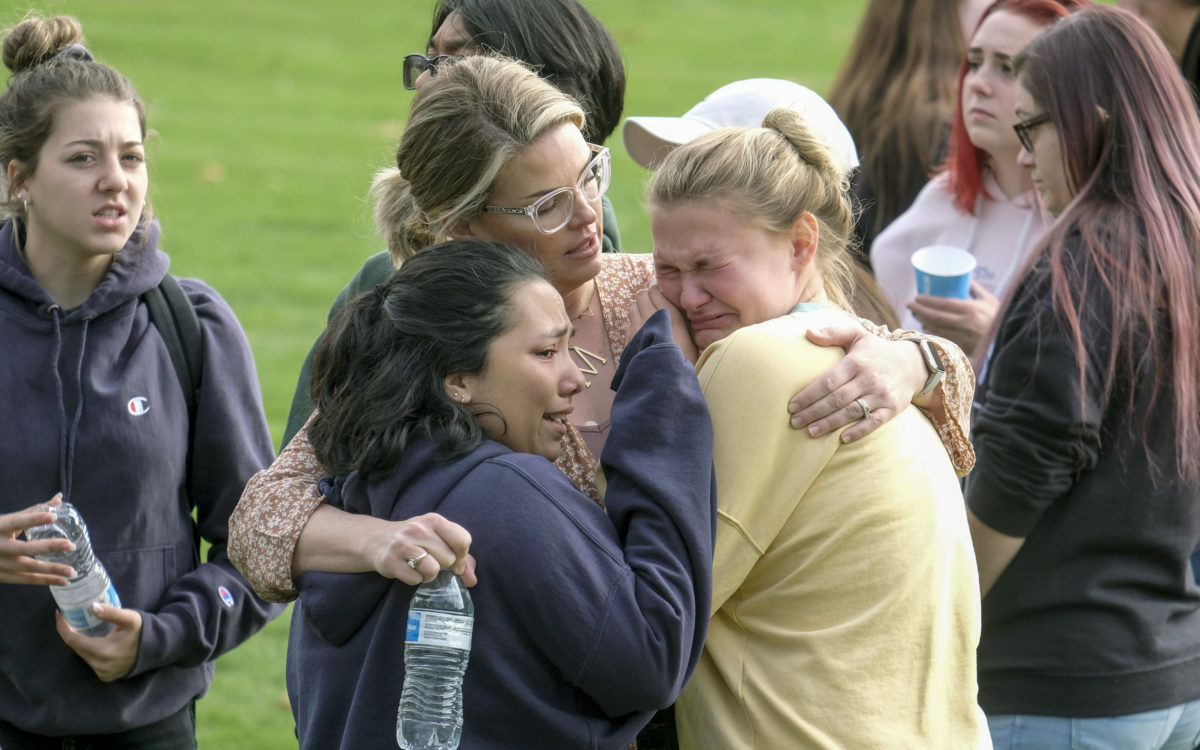 Credit: AP Photo/Ringo H.W. Chiu
Students are comforted as they wait to be reunited with their parents following a shooting at Saugus High School that injured several people, Nov. 14, 2019, in Santa Clarita, Calif.

Credit: AP Photo/Ringo H.W. Chiu
Students are comforted as they wait to be reunited with their parents following a shooting at Saugus High School that injured several people, Nov. 14, 2019, in Santa Clarita, Calif.

A Saugus High School student who turned 16 on Thursday shot five of his fellow students, fatally wounding two before turning the gun on himself, according to authorities.

The alleged shooter was among the wounded students found when authorities arrived at the school shortly after 7:30 a.m.

Authorities said a 16-year-old girl and a 14-year-old boy were the students who were killed.

The sheriff said a .45-caliber semi-automatic pistol was recovered at the scene with no rounds remaining. The suspect was hospitalized in “grave condition,” officials said.

A search warrant has been served on what investigators believe to be the suspect’s residence. Multiple media outlets have named the suspect, but LAist has not independently confirmed his identity and authorities have so far declined to release it.

Investigators do not know what connection may exist among the shooter and the victims other than the fact they are all students at the school and a motive has yet to be determined, said Capt. Ken Wegener of the sheriff’s homicide bureau.

Sheriff’s officials also responded to rumors that threats had been made ahead of the shooting on social media.

“We have checked for recent threats. We identified two, which were both investigated and had no nexus to the subject,” Wegener said.

However, Wegener later said a message had been posted to what investigators believe was the suspect’s Instagram account. The message, which appeared in the bio under the suspect’s account name, read, “Saugus, have fun at school tomorrow.”

The bio was later changed, presumably by a friend, a hacker, or someone else with access to the account, Wegener said.

WHAT WE KNOW ABOUT THE VICTIMS

Seven patients were triaged, treated and transported to local hospitals, according to fire officials. One was airlifted, while the other six were taken by ground transport. Six of the patients had shooting-related injuries.

“We hoped the day would never come, but today it came,” said hospital spokesman Patrick Moody.

The shooting took place shortly after 7:30 a.m. and was over in just 16 seconds, from the moment the suspect took out the gun to the time he shot himself in the head, said Capt. Wegener.

At least three off-duty law enforcement personnel, along with fire personnel, happened to be dropping off their children at the school, Villanueva said.

One detective with the Santa Clarita Valley Sheriff’s station had just dropped off a family member and was driving away from the school along the perimeter when he saw the students running away, Villanueva said. He and two other off-duty officers from the Inglewood and Los Angeles police departments, respectively, were on the scene within seconds.

The school had trauma kits and the off-duty officers used these to begin rendering first aid almost immediately, having noticed the handgun and determining there was no pending threat, Villanueva said.

The off-duty officers were followed about a minute later by uniformed deputies from the Santa Clarita station, Villanueva said. That was at 7:41 a.m.

Aerial footage from NBC4 showed a large law enforcement and emergency personnel presence at the school as hundreds of students were led off school grounds.

Students from Saugus High were bused to Central Park on Bouquet Canyon Road, where a family reunification center was established. Staff from LASD’s Mental Evaluation Team were on site to assist students.

“This is a community that comes together,” L.A. County Supervisor Kathryn Barger said via Twitter. “We’re all standing in solidarity with the Santa Clarita Valley and will continue to offer mental health resources and support for those who need it.”

LASD Undersheriff Tim Murakami said in a tweet that deputies needed to interview every student before releasing them to their parents and apologized for the wait.

At an afternoon press conference later in the day, Wegener said that investigators were still interviewing victims and witnesses. He said they recognized that some people may have left the scene before authorities arrived and he asked anyone with information about the incident or about any events that may have led up to it to call investigators at 323-890-5500.

Paul Delacourt, assistant director in charge of the FBI’s Los Angeles field office, said federal agents were assisting local authorities and there were no additional threats to area schools.

Initially, every school in the William S. Hart Union High School District was placed on lockdown, but by 10:20 a.m. those orders had been lifted.

The district said all of its schools will be closed Friday “out of respect for the victims and their families.”

The incident has captured national attention, and President Donald Trump was among those offering their thoughts and prayers.

“We continue to monitor the terrible events at Saugus High School in Santa Clarita, California through our ongoing communications with Local, State, and Federal Authorities,” Trump tweeted, adding, “We send our deepest condolences to the families and friends of those tragically lost, and we pray for the speedy recovery of the wounded.”

People gathered for the candlelight vigil at Central Park on Thursday night. On hand were horses provided by the city as comfort animals.

The 14-year-old boy who was shot and later died was a member of Saugus High’s ROTC, which was hosting the vigil to honor him, according to two of his classmates who are also in ROTC.

Saugus High sophomore Aidan Williams and junior Ayana Bruce told LAist the boy was a freshman who hadn’t been with ROTC long but was already loved and appreciated by all of his peers.

“He had a really outgoing personality, and he really just made everybody smile when he was around them,” Williams said.

Bruce said she was in front of the school but not on campus when she heard it was on lockdown.

“I didn’t know what was going on until Aidan actually called me and told me that there was a shooting,” she said.

Williams was at the church building down the street and heard the shots.

“Somebody came running into the building and told us to stay put. And then I heard the sirens and we all just went into the gym and stayed put for a little while and then my friend took me home,” Williams said. “It was pretty chaotic trying to get out of there.”

Beeler said she was driving to work and heard about the school lockdown on the radio. Her husband called to tell her their daughter was safe, but she didn’t get any more details until she got home from work.

“I just didn’t have any clue about what was happening, how, where she was, you know, in relation to where the shooter was,” Beeler said. “So that’s pretty frightening. And I feel so bad for the children, you know, that we lost. And the parents that can’t hug their kids tonight.”

Earlier in the day at the reunification center, Saugus High School junior Yvette Mojica said her class was watching a documentary when it happened. She jumped out of her seat when she heard gunshots.

She knew the sound immediately, she said — it was the sound she’d heard on Oct. 1, 2017 in Las Vegas when a gunman killed 58 people and wounded hundreds more at a country music festival. Mojica did not attend the festival, but said she was close enough to hear the barrage of gunfire and witness the chaotic aftermath.

When she heard the shots Thursday and spoke up, “No one believed me. They’re all like, ‘OK, well, what do you mean? You’ve heard gunshots?’” she said. “I got up and I locked the door and we have this computer cart and I blocked the door. I was like, ’No one can come in, turn off the lights,’ and I told everyone to get under their seats. … I could see everyone texting their parents telling them that they’re OK.””

Mojica said students were in the room for an estimated two hours before being evacuated by authorities.

Tom Griswold has two sons — a sophomore and a senior — who attend the high school. He found out about the shooting through a text from the school and a call from his wife.

“One son ran, as soon as he heard the gunshots. He was on his way into school and ran and … My other son is, was in the classroom when they put it on lockdown. And he was just texting that he was safe,” said Griswold, who was waiting to be reunified with his children.

Arthur Trowbridge, father of a senior at Saugus, got a text from his son shortly after 7:30 a.m. saying that he had barricaded himself with other students inside a room. His son added that he had a fire extinguisher and that other students grabbed textbooks to use as weapons in case the shooter came in.

Trowbridge said he was glad that he and the school had trained his son on what to do during an active shooter situation.

“I had full faith in the fact that he was going to be OK, because he had done everything he had been trained to do,” Trowbridge said. His son texted him about 30 minutes later to say that he was safe and authorities had moved his group to the gym.

Authorities have not released the name of the suspect in Thursday’s shooting, but law enforcement did deploy to a home on Sycamore Creek Drive in Saugus identified as his residence. No weapons have been found at the residence.

“At this point, we have no indication of any motivation or ideology,” FBI L.A. field office assistant director Delacourt said.

Jackie Simmons, 66, has lived in the area for 45 years. Her house is down the street from the suspected shooter.

“I was leaving this morning, I was at home and I was leaving. I was getting ready to go, my daughter called me and said, ‘Mom, it came to our neighborhood.’ I go ‘What are you talking about?’ and she goes ‘Mom, active shooter.’ And she’s crying, ’cause that’s the school she went to,” Simmons said.

Simmons left the house, unaware of the details of the shooting or the suspect. While driving, she received another call saying the suspect lived on Sycamore Creek.

“That’s the street I live on,” said Simmons. “I freaked. I freaked out, I turned around and I tried to get home as fast as I could. It just freaks you out when you hear it’s your street. This is our street… it’s unbelievable.”

Neighbors in the area described it as a quiet, family-oriented neighborhood.

Bianca Cuevas, 16, said she had recently transferred from Saugus to Canyon High School, which was briefly placed on lockdown after the shooting.

“I woke up and I was expecting a good day at school and all of a sudden hear all these phone calls and all these pictures going through social media, and my house on the news, all these cops surrounding my house,” Cuevas said Thursday. “It was just so surreal to me… it’s like, wow, if I wouldn’t have left Saugus not even two weeks ago, I would be going through that situation with all those scared students.”