Beyond Parkland: Remembering all the victims of gun violence 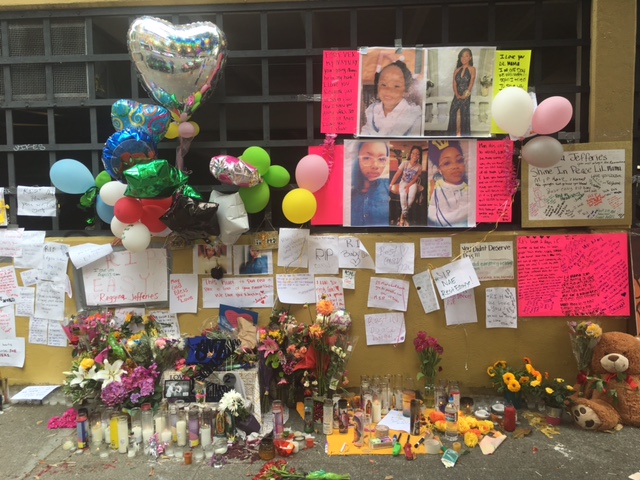 On this day, the one-year anniversary of the Parkland shootings, let us remember the lesser known victims of gun attacks, the ones who make up the majority of those killed by violence involving firearms.

Nearly three years ago, 17-year-old Reggina Jefferies happened to be in downtown Oakland on a bright late afternoon, a block from City Hall and from EdSource’s offices.

Among other things, Reggina was a gifted dancer. She had just performed at a funeral for two friends who had drowned in a tragic incident a few days before.

Reggina’s mother had taken her to a funeral for the boys at an East Oakland church, and then dropped her off at the Venue Club in downtown Oakland for a repass — a celebration after the funeral.

“I called my daughter at 5:25 and asked her if she was OK and she said yes,” her mother told reporters later. “I got a phone call that my daughter had been shot at 5:36.”

Reggina and other celebrants had left the club around 5:30 p.m. Apparently two men on the street who had nothing to do with them got into an argument and started shooting at each other. 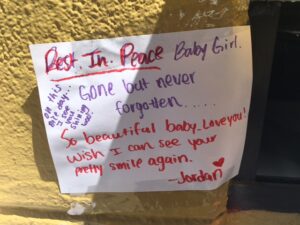 Reggina was struck by the flying bullets, as were three of her friends. They survived. Reggina didn’t.

A memorial shrine sprung up at the street corner outside the parking lot where she died. Emotionally raw notes from her friends and family were difficult to read.

“You didn’t deserve this. We did everything to keep you here,” read one from classmates who were with her when she was shot. “Prayers and love to your family. xoxo. Jayla, Kandice, Billie, Rayniesha.”

“Rest in peace, baby girl,” read another. “So beautiful, Baby. Love you! Wish I can see your pretty smile again — Jordan.”

But predictably after a few weeks, the balloons and candles disappeared. The posters on the wall remained. A few months later those were removed as well. Then, the parking garage itself was demolished to make way for a 40-story residential tower that is going up in its place. It will be one of the tallest buildings in Oakland, a response to the escalating housing costs in the city.

The construction has erased any physical trace of the terrible tragedy that occurred at that place.

The building is a sign of “progress,” I suppose. Oakland has moved on. Developers have figured out a way to make a profit from the housing crisis in the city. It is a pathetic statement that because no one has figured out how to make money to solve the crisis of gun violence, much less is happening on that front.

There is a glimmer of good news. Last year, the number of homicide victims in Oakland declined to 68, its lowest level since 1999, down from 71 in 2017, and 86 in 2016.  Authorities attribute the decline in part at least to Operation Ceasefire, a bright and bold example of community mobilization against gun attacks, especially those perpetrated by gangs.

But 68 homicides is nothing to celebrate. One of the last victims of gun violence in Oakland in 2018 was 18-year-old Mohamed Souma, who died on Dec. 1 last year. He graduated from Berkeley High School last year, and played on my son’s soccer team. He was at a party in Oakland. It’s not clear what happened. Sometime around 10 p.m. gunfire erupted, leaving Mo, as he was called,  dead at the party.

“Man identified as victim in fatal shooting,” a headline in a brief article in the San Francisco Chronicle read.

Legally, Mo was a man. But really, he was a teenager, just 18 years old.

His classmates wrote up their remembrances in the Berkeley High Jacket, the school newspaper. “I think what was the most memorable of all was his celebratory dance moves after every goal that would make the team feel ecstatic,” wrote one of his soccer teammates.

“Mo was a light,” wrote another classmate. “Doesn’t matter where he went or who he was with, he put a smile on their face.”

As in Reggina’s case, Mo’s killer has yet to be found. Even if they had been, that would provide little comfort to their families and friends. Mo and Regina should still be alive today.

They are not alone. In the year since the Parkland shootings, some 1,200 young people have died as a result of gun violence, their deaths memorialized in a spectacular journalist project titled “Since Parkland.” Teenage reporters describe each of the 1,200 who lost their lives.

Some of the survivors of the Parkland school massacre have been heroic in prodding the nation to do more. They have helped to move the needle on gun regulation in several states, but nationally there is still inaction.

Hogg quoted the father of Joaquin Oliver, his 17-year-old classmate who died on that bloody February day. Joaquin, he said, was not a victim, but an “activist who lives on within us.”

“The ripple that people created in their lifetime can be amplified by other individuals who are still alive today,” Hogg said.

Let us remember Reggina Jefferies and Mohamed Souma,  killed before they were 20. May their lives move us to do more, much more.