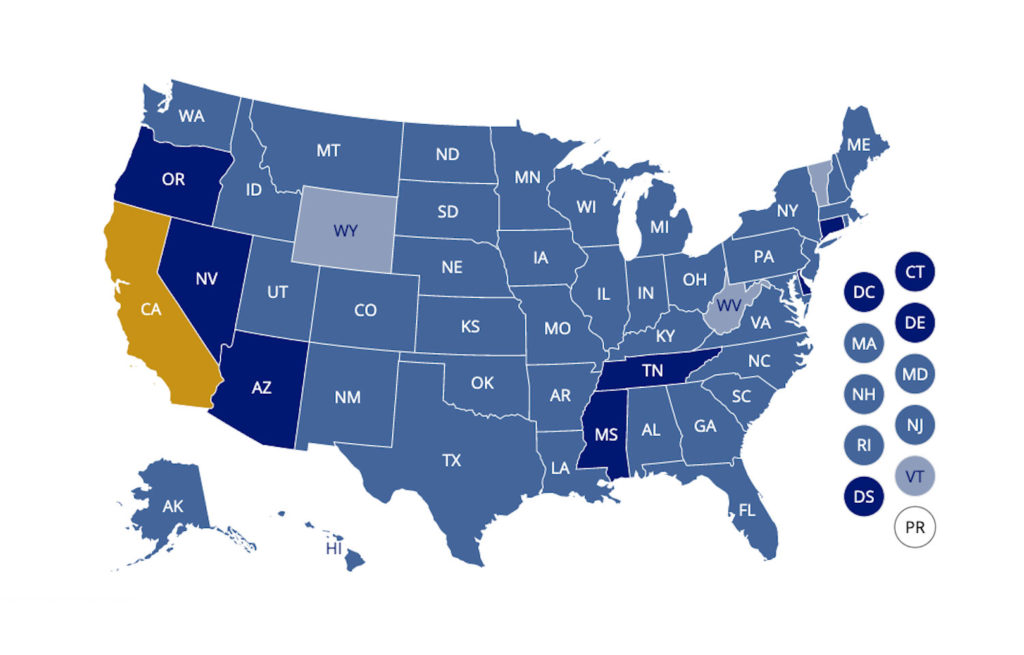 During a decade of stagnation, California slowly narrows gaps with other states in math and reading 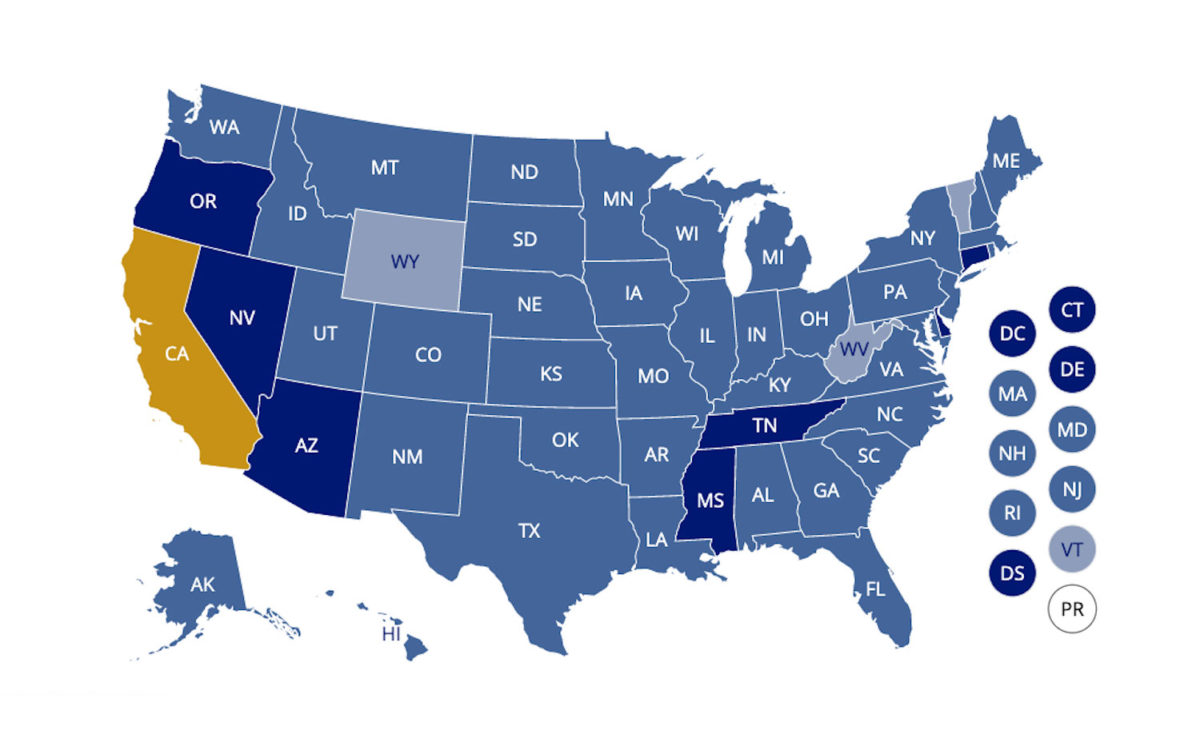 In 2017, California education leaders heralded the significant increase in the state’s 8th-grade reading scores on the National Assessment of Educational Progress as a sign that the state’s investment in education and its adoption of the Common Core standards had taken hold.

Curb that enthusiasm. In 2019, California’s 8th-graders gave back the gain, as did much of the nation, underscoring that progress on state and national standardized tests is best measured over a decade, not in single years.

The latest scores of NAEP, the closely watched national assessment taken by a sample of 4th- and 8th-graders in every state, showed that California largely followed the national pattern this year with little to no change in math but a significant decline in 8th-grade reading on a scale of 500 points.

In math, both California’s and the nation’s 8th-grade scores fell less than 1 point. The nation’s 4th-grade math score rose 1 point and California’s rose 3 points — though it was not considered statistically significant because of the sample size.

The biggest change was in reading and the news was not good. Joining 30 states whose 8th-grade reading scores also fell, California’s decline of 3 points, the same as the nation, about matched its point gain in 2017.

Los Angeles Unified, one of three California districts whose results are reported, had big single-year drops of 6 points in both 8th-grade math and reading. It was the largest decline of the 27 urban districts participating in the Trial Urban District Assessment project.

In math, since 2013 national scores of the highest-performing students have risen, while scores of students who have struggled — those who score in the lowest 10th and quarter of test takers — have continued to drop.

“It is not clear why it is happening, but it is consistent,” said Peggy Carr, associate director of the federal National Center for Education Statistics, which administers NAEP.

Carr declined to speculate on the reasons there has been “frustratingly no progress in the past decade” on NAEP. Opponents of the Common Core will cite the adoption of the standards in most states in 2010 or a letup in accountability for standardized testing with the relaxation of the federal No Child Left Behind law’s penalties, then the replacement of the law with the Every Student Succeeds Act in 2015.

Michael Petrilli, president the Ohio-based Fordham Institute,  suggested a different reason: the decline in spending on education “for the first time in American history,” following the Great Recession.

“I think we are still seeing the effect of that, even as states are starting to open their wallets again,” he said. The recession had a particularly negative impact on low-income families, whose children are now in the grades being tested, he said.

California policy leaders who have stressed patience while districts adapt to the Common Core and praised increases in K-12 funding, starting in 2013, will not disagree. While the nation as a whole was treading water, California did slowly narrow the gap, in some areas significantly, between it and the national average over the past decade. Steady progress overall in reading can be tracked back to 2003.

And while the gap between high- and low-performing students has expanded nationally in both subjects, it occurred only in 8th-grade reading in California, with the percentages of students scoring below basic — the lowest category — and scoring advanced both grew substantially in 2019.

California has among the nation’s highest proportions of low-income students and English learners. To account for demographic differences among states, the nonprofit Urban Institute has adjusted scores to compare similar students. Using that approach raises California’s 2019 score and state ranking significantly in both math and reading in both grades – elevating its 4th grade reading scores, for example, from the bottom quarter to the top quarter of states. You can find this interactive tool and technical appendix, which the Urban Institute released on Wednesday, here.

As with the state’s annual standardized assessment, the Smarter Balanced test, there remain huge disparities in performance on NAEP among racial and demographic groups and progress in closing the gaps has been mixed.

The large gap between students qualifying for the federal lunch program and those who don’t shrank and 3 points in 8th-grade reading between 2009 and 2019. It narrowed 9 points in 8th-grade math — one of the biggest declines nationally — but still remained, tied with Ohio, the largest in the nation: 36 points. The gap between whites and Latino students also declined a little in both subjects and grades.

But the gap between black and white students increased 10 points, to 37, in 4th-grade math and 12 points, to 38, in 8th-grade math, one of the largest in the nation, during that time. Black students’ reading scores actually declined in both grades.

NAEP is designed to test what a board of experts has determined students are supposed to know in 4th and 8th grades. Questions are not based on any state curriculum, although studies have shown that the questions are consistent with expectations of the Common Core standards that most states, like California, have adopted partly or fully.

Los Angeles Unified, Fresno Unified and San Diego Unified are among the California districts that participated in the Trial Urban Districts Assessments project, encompassing more than half of students in cities with populations larger than 250,000.

While Los Angeles Unified’s scores took a hit this year, San Diego was the only district whose scores significantly exceeded the 27-district average in both subjects and grades. Since 2003, scores in 4th-grade math have risen every year except one.

Fresno Unified, one of the lowest-income cities in California, has narrowed the gap in math scores between it and the other urban districts in 4th grade but not 8th grade, where it was 21 points below the urban average in math this year.

Over the past decade, L.A. Unified’s NAEP scores  have shown progress in reading, particularly in 4th grade. Before the big drop this year, 8th grade math had increased since 2009  but been flat in 4th grade. In both grades and both subjects, its scores in 2019 are below the urban districts’ average.

“Los Angeles Unified has made gains over time in both reading and math, thanks to the dedication and hard work of our educators, students and families,” Interim Chief Academic Officer Alison Yoshimoto-Towery wrote in a statement. “Our charge is to ensure a sense of urgency to close opportunity gaps for students and accelerate our rate of progress,”