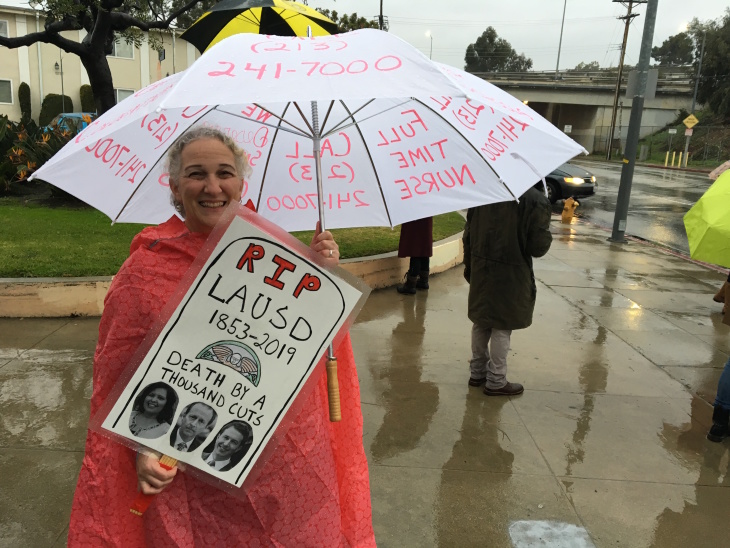 The stakes for the teachers’ strike in Los Angeles were exceptionally high, not only for the local adversaries in the battle but also for the labor movement in California and nationally.

The reason: the strike came at a time when labor unions were supposedly weakened by the Supreme Court’s decision last June in the Janus vs. AFSCME case, ruling that workers do not have to pay mandatory union fees even if a union represents them at the bargaining table.

It was a strike that United Teachers Los Angeles, representing over 30,000 teachers, had to win by delivering on the key demands they put on the table: not only higher salaries but a range of support services intended to improve working conditions and students’ academic outcomes.

There was widespread expectation that the Janus lawsuit — filed by several right-wing organizations on behalf of Mark Janus, a social worker in Illinois — would diminish the influence of public sector unions, especially in California, where they are powerful forces in the workplace and in state politics generally.

With less revenue, the reasoning went, unions would have less lobbying clout, a smaller war chest to contribute to political campaigns and less money to organize workers.

The strike in Los Angeles stood out at least in part because it was the largest, at least in terms of the number of workers involved, since the Supreme Court’s Janus ruling. UTLA President Alex Caputo-Pearl acknowledged its significance at the press conference announcing the contract agreement in City Hall this week.

“Obviously, this is a crucial moment for unions in the United States,” he said, at a time when “a lot of people are questioning” their future.

The L.A. strike, Caputo-Pearl suggested, should put that issue to rest.

The strike was a declaration that public sector unions are still alive. Instead of being weakened by the Janus ruling, UTLA was able to mobilize tens of thousands of teachers and generate support from other teachers around the state in a show of statewide unity not seen in decades.

The importance of the strike was underscored by the on-the-ground presence of the leaders of the largest teacher organizations in the nation: Randi Weingarten, president of the American Federation of Teachers, and Lily Eskelsen Garcia of the National Education Association.

As Mayor Eric Garcetti noted, the strike “was painful and had a cost.” But it should boost the spirits of labor organizers nationally, especially teachers’ unions waging similar battles. The strike settlement came at a time when unions struggle to maintain a firm foothold in the labor market. Union membership has now reached historic lows, according to a report issued last week by the Bureau of Labor Statistics. In 2018, only 6.4 percent of workers in the private sector belonged to a union.

But if there has been any bright spot, it is in the public sector, where unions are still strong, with a unionization rate five times that of the private sector. In California, those rates are much higher than national ones. About 59 percent of public sector workers in California belonged to a union last year, according to the UC Berkeley Labor Center, compared to about 34 percent nationally.

In this strike, teachers were bargaining from a position of strength. Public opinion polls show that teachers are generally respected and that most Americans think teachers are underpaid. During the strike, they enjoyed widespread support from parents and others in Los Angeles. That was strengthened by union demands for more counselors and other support staff who arguably would benefit children and their families more than teachers. The strategy appeared to be influenced, intentionally or not, by a new approach to organizing called “bargaining for the common good.”

Also UTLA currently is arguably in the strongest position it could hope to be in the wake of the Janus decision, whose longer term impact has yet to be felt. That’s because the union has so far been able to convince most teachers to opt into the union and pay their union fees, even though they are no longer mandatory.

But these were mostly teachers who have become accustomed to paying dues, the ones most likely to be most appreciative of the union’s value. Over time, as newer and younger teachers come into the profession, they may not feel the same allegiance, especially as they cope with the impact of high housing costs and they make tough decisions about where and how to spend their lowly beginning teacher salaries.

Now the union must assess what it has gained and what it has lost as a result of the strike. One unfortunate outcome is that the district said it lost an estimated $125 million in state funds it would have received if students had been in school, although that amount was offset by the approximately $60 million it saved in not have to pay teacher and other salaries.  The district now may be in even weaker financial shape than it was before the strike, and many questions remain as to how it will pay for everything it agreed to at the bargaining table.

But it is clear that, for now, the union is still a potent force, despite ongoing efforts to weaken it and render it irrelevant in Los Angeles and California.