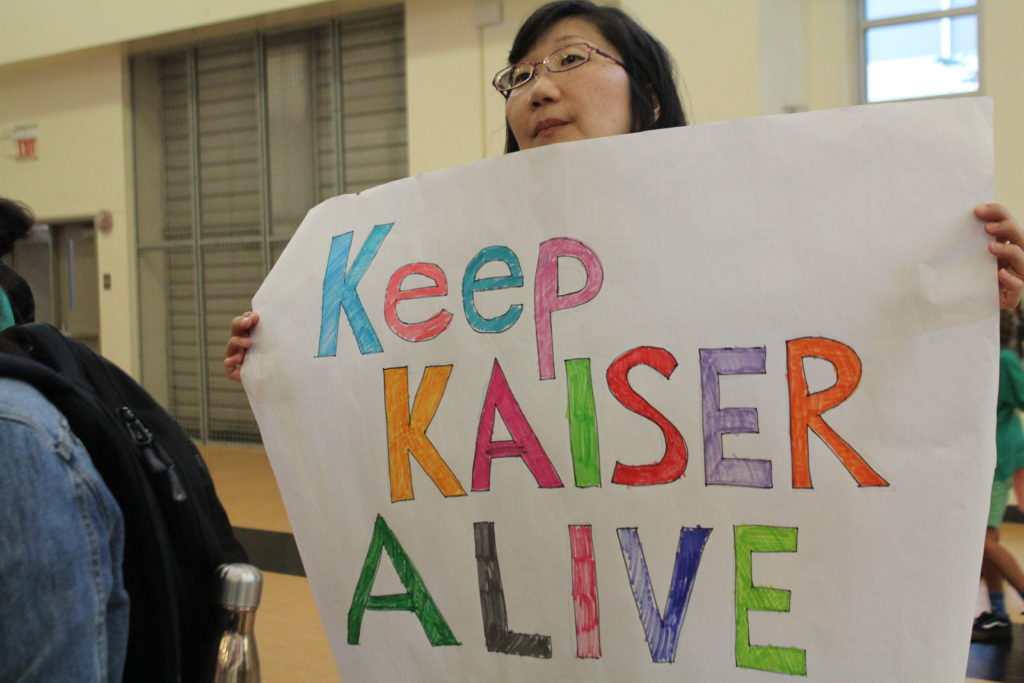 Residents, some school board members object. 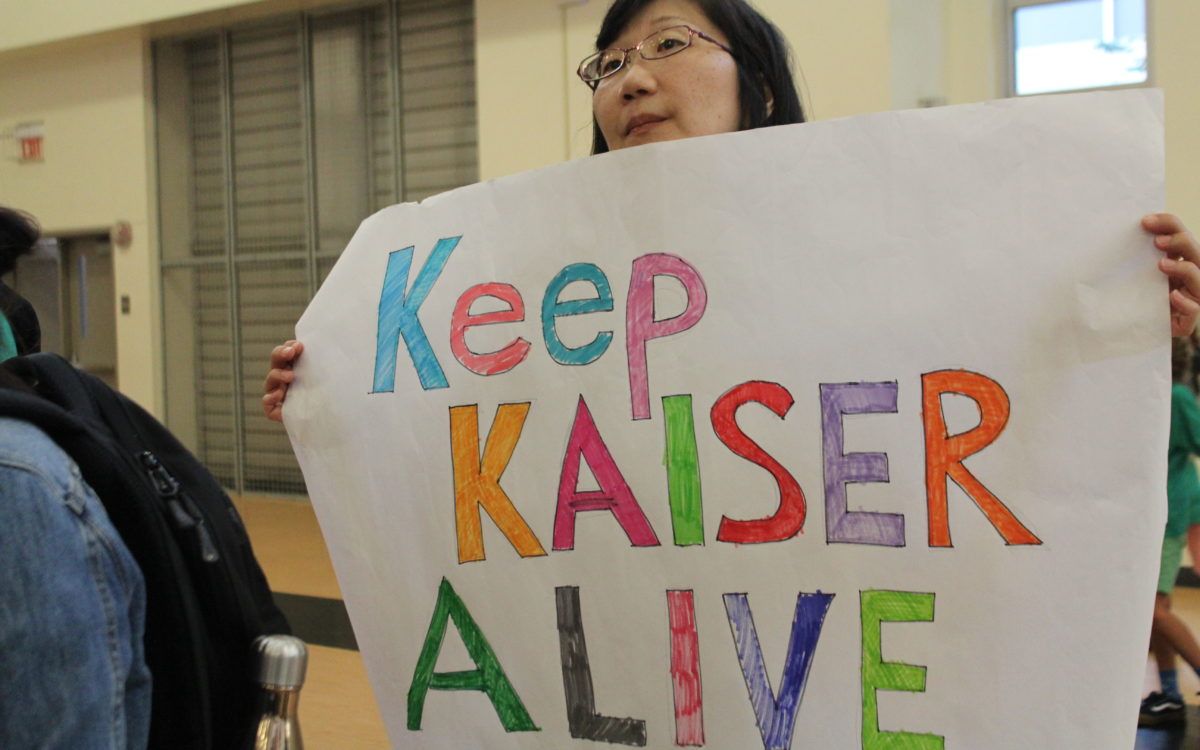 Theresa Harrington / EdSource
A Kaiser Elementary School parent urges the Oakland Unified School board not to close the school at its Aug. 28, 2019 meeting.

Theresa Harrington / EdSource
A Kaiser Elementary School parent urges the Oakland Unified School board not to close the school at its Aug. 28, 2019 meeting.

Oakland Unified School District took one more step this week toward a very contentious plan of closing campuses to save funds that can be redirected to improve all schools.

The district’s superintendent called on the school board to show courage by closing two schools and revamping two others to improve the district’s education program “because our kids don’t have time to wait.”

Superintendent Kyla Johnson-Trammell proposed closing one small North Oakland school and merging it with another, consolidating two East Oakland middle schools, expanding an East Oakland K-8 dual immersion school and investing in a redesign of Fruitvale Elementary in East Oakland to build on its recent academic successes. The school “posted significant double-digit growth” in its Smarter Balanced statewide test scores in English and math for students in grades 3 through 5 in 2018-19, according to the staff report to the board.

The plan for the schools announced Wednesday would go into effect next year if it is approved by the school board. It is expected to save the district about $2 million over the next five years. The savings are based on estimates that it would save or generate revenues of about $8.2 million, but cost nearly $6.2 million.

She and her staff met with immediate opposition from some school board members and community members.

Hundreds of parents and community members packed the school board meeting, with some near tears and some vowing to fight the plans and recall school board member Jody London, who represents north Oakland, if one of the schools, Kaiser Elementary is closed.

“The change we need to be about is creating quality, where opportunity is not concentrated in the hands of a few, but granted to all,” Johnson-Trammell said. “We must act boldly and courageously to disrupt our past practice of incremental improvement because our kids don’t have time to wait…”

She said the district’s “ultimate goal” is to improve the city’s schools. “This level of change is difficult and complex. There are no easy answers, but this will result in more well-resourced schools across the city.”

School board members disagreed about which schools should be affected and how quickly the decisions should be implemented, causing some to question whether the board will be ready to vote on Sept. 11, as planned.

Parents from another school proposed for merger — the School of Language in East Oakland near the Oakland Coliseum — urged the board to take more time with the merger of their school and Frick Middle School so that the school communities can get to know each other this year, co-locate on the Frick campus next year to plan the redesign, then combine in 2021-22. They did not present any data regarding how much more it would cost to delay the merger a year. However, the district estimated it would save $340,069 in 2020-21 if the two schools merge next year.

School board member Roseann Torres, who represents a southern district not affected by the proposals, cited a study that showed school closures don’t save money unless there are “mass layoffs,” which she said she didn’t expect. According to the plan, the district expects to save about $687,500 in staff costs over five years.

“I am surprised that we would even think this is a realistic plan,” Torres said, “because it’s not.”

But a group of parents from the Oakland REACH parent organization urged the board to move quickly to close and consolidate schools so that others can be improved, saying black and brown students have not been well-educated in the district’s flatland schools.

This group has previously proposed that the district offer students from poor-performing closed schools an “opportunity ticket” that would give them enrollment preference above neighborhood children in higher-performing schools. But this was not discussed Wednesday.

The school board has decided it needs to close and consolidate some campuses because it has more schools than it needs due to enrollment declines over the past two decades. The board recently approved a Citywide Plan, which found the district could close or consolidate up to 24 of its more than 80 schools and still serve its roughly 37,000 students.

The changes proposed on Wednesday are the second round of school closures and consolidations developed through a “blueprint” process that looks at several criteria including location, enrollment and quality. The district has already closed one school, merged two schools, expanded two schools and is the planning stages of a second merger as part of the 10-year plan that is expected to include more school closures, consolidations and expansions in the future. The total number of schools to be affected has not been determined.

Some accused the district of pitting higher income families who send their children to Kaiser Elementary in the north Oakland hills against low-income families in the so-called flatlands neighborhood served by Sankofa Academy.

While the district characterized the merger of the two elementary schools as a consolidation, Kaiser parents said it is a closure and some said they would leave the district if the plan is approved.

They presented an alternative that would enable Kaiser to expand and offered to form a joint PTA with Sankofa to help it raise funds and build community. However, the Kaiser families did not present any data about how much it would cost to expand the school or how much revenue could be generated by additional students.

Torres pointed out the district would need to spend about $700,000 to repurpose buildings at Sankofa and that the district estimates it could lose up to $600,000 from students who leave Kaiser once it closes to attend other area schools or be home- schooled.

She suggested slowing down the process and relocating Kaiser and Sankofa students on the closed Santa Fe Elementary campus in north Oakland about 1 mile south of Sankofa.

Many parents, teachers and community members asked the school board to delay its vote, saying the proposals were drawn up hastily over the summer without meaningful public input. Some said they didn’t trust the district to do what’s best for their children.

“We really need to stop the chaos that’s going on,” said Keith Brown, president of the Oakland Education Association teachers’ union. “This process has unfortunately divided our community.”

Sankofa parents, who have been threatened with school closures in the past, said they are happy to merge with anyone if it means they will finally get what they need to serve their students.

“We have been starving for resources for years,” said Sankofa parent Valerie Manchester. The school, whose students are predominately low-income, is located in the Upper Telegraph area of northwest Oakland near the Berkeley border.