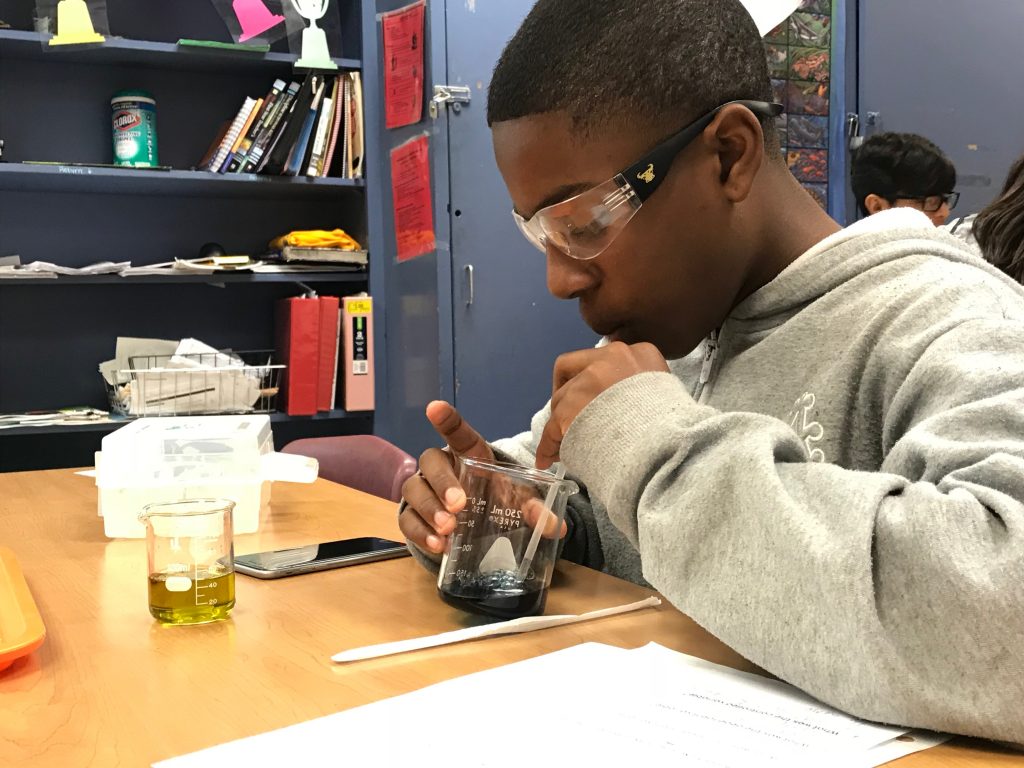 While California students began taking a new statewide science test this past spring, school districts were still struggling to get teaching materials aligned to the state’s new science standards into classrooms.

A new nationwide effort is trying to speed up that process by offering free, open source science materials to teachers and schools.

California adopted the new standards in 2013 and this past spring began administering a new state science test. But it wasn’t until last November that the State Board of Education approved a list of recommended textbooks and materials aligned to the new standards for kindergarten through 8th grade.

As a result, some students continue to learn from old textbooks and teaching styles.

“Districts couldn’t adopt materials before November because publishers weren’t ready for anyone to adopt. Their materials were being made for the state review first,” said Shawna Metcalf, president of the California Science Teachers Association.

This month, OpenSciEd plans to release its first set of materials, in the form of PDFs and Google Docs, for grades 6, 7 and 8. The release will include the first of six instructional units for the different grade levels, which will each cover about six weeks worth of materials for both teachers and students.

Each unit includes videos, slide decks, student handouts and assessments, as well as instructions for hands-on activities. The plan is to release more units every six months until there is a three-year middle school curriculum by the winter of 2022.

California, 18 other states and the District of Columbia have adopted the Next Generation Science Standards. As districts implement the new standards, the high price of traditional textbooks can be an obstacle. That’s a major way in which the nonprofit OpenSciEd, with its open source model, wants to set itself apart.

“Some districts are looking at OpenSciEd saying ‘We don’t have to spend a million dollars,’” said Phillip Lafontaine, a regional director with K-12 Alliance at WestEd and project director for OpenSciEd in California. “That’s the whole point of open source materials.”

OpenSciEd materials were piloted in schools around the country last fall, including in 25 California classrooms. In the spring, the curriculum developers solicited feedback from the teachers and state leaders to make adjustments, such as clarifying assessment strategies.

The materials also received external review and approval by Achieve, an education nonprofit that helped develop the new science standards. Achieve gave two of the units the highest score available on its rubric for science units designed for the Next Generation Science Standards.

One potential challenge OpenSciEd faces in California is that it is not on the state’s list of approved science materials, which many districts will turn to as they begin their curriculum adoption process. Local education agencies are not required to choose state-adopted materials, so teachers and schools can still download and supplement their science lessons with OpenSciEd units as they roll out.

But because the full curriculum won’t be available until 2022 and the state’s textbook adoption process isn’t scheduled to begin again for another six years, OpenSciEd won’t appear on the state-approved list anytime soon.

Gilly Ryan, a 6th-grade teacher at Pride Academy in the Santee School District near San Diego, was one of the California teachers who was part of the OpenSciEd pilot. She was already teaching to the new science standards before trying the materials, but she said preparing lessons was not easy. She spent hours reading through the new standards, teaching herself new concepts and working with other teachers to come up with lesson plans.

OpenSciEd made that process simpler, she said, by cutting down on the legwork of finding videos or articles for students to read and coming up with experiments that support the new standards. Because the materials are open source, she can download it for free, mix and match with other resources, or adapt them to her existing lesson plans.

The new standards encourage hands-on experiences such as project-based learning, where, unlike traditional lectures, students work on an assignment over an extended period of time to answer a complex question. They then demonstrate how they arrived at their answers.

“Project-based learning is intimidating for teachers because you have to come up with a lot of ideas. But OpenSciEd is straightforward,” Ryan said.

A key feature of OpenSciEd’s instructional model is that students’ questions about scientific phenomena guide the lesson and activities. Ryan added that the curriculum writers anticipated several of the questions that students came up with during class, which made it easy to lead lessons based on student inquiry.

Steering the project is an advisory board that includes former U.S. Secretary of Education John King, David Evans, executive director of the National Science Teaching Association, and Stephen Pruitt, president of the Southern Regional Education Board. In addition to teachers testing the materials, state officials who oversee science education or other representatives from the 10 states that were part of the pilot, including California, were brought on to help shape and share the materials.

The first set of units OpenSciEd is releasing this summer include thermal energy for 6th grade, metabolic reactions for 7th grade and sound waves for 8th grade. In the 6th grade heat transfer unit, for example, students are asked to measure the difference they see between heat escaping an insulated cup versus a non-insulated cup. Students work in a group to test the difference between styrofoam, plastic or metal cups to see which conducts heat faster, then record and share observations as a class.

While the price of materials won’t be an issue with OpenSciEd, getting teachers to shift their teaching styles to foster more student discovery in class might be. As a field tester, Ryan received formal training from OpenSciEd in the new materials. Without that kind of support, she said it may be hard for teachers to understand how to use it effectively.

“With NGSS, you can’t just turn the textbook to the next page. It is cognitively harder on the teacher in the lesson planning parts,” Ryan said. “If someone never received any training in the materials whatsoever, it would be more challenging to wade through.”

Anticipating some of those concerns, each OpenSciEd unit also contains a teaching handbook that explains the instructional model, as well as content such as agendas, facilitators guides and handouts for in-person workshops if schools or districts want to offer trainings for teachers.

Traditional assessments like tests are built into the new curriculum. But OpenSciEd also emphasizes less formal assessment. For example, teachers observe students as they are working through the investigative process and gather data on their progress.

“Many of the assessment pieces of the curriculum are intended to be seamless with instruction. It’s not stop, drop and test but rather a way for the teacher to get feedback along the way,” said James Ryan, executive director of OpenSciEd. He added that was an area of concern that some teachers who tested the materials shared and that developers had to fine-tune the language in the OpenSciEd teacher guide to make that process more clear.

“These new standards call for a lot of shifts in teaching science. It requires kids figuring things out a lot more and not directed by the teacher,” said Ryan of Pride Academy. But she thinks the extra work has been worth it so far. “It was exciting to see their understandings grow and their curiosity and they stayed with it all the way through.”