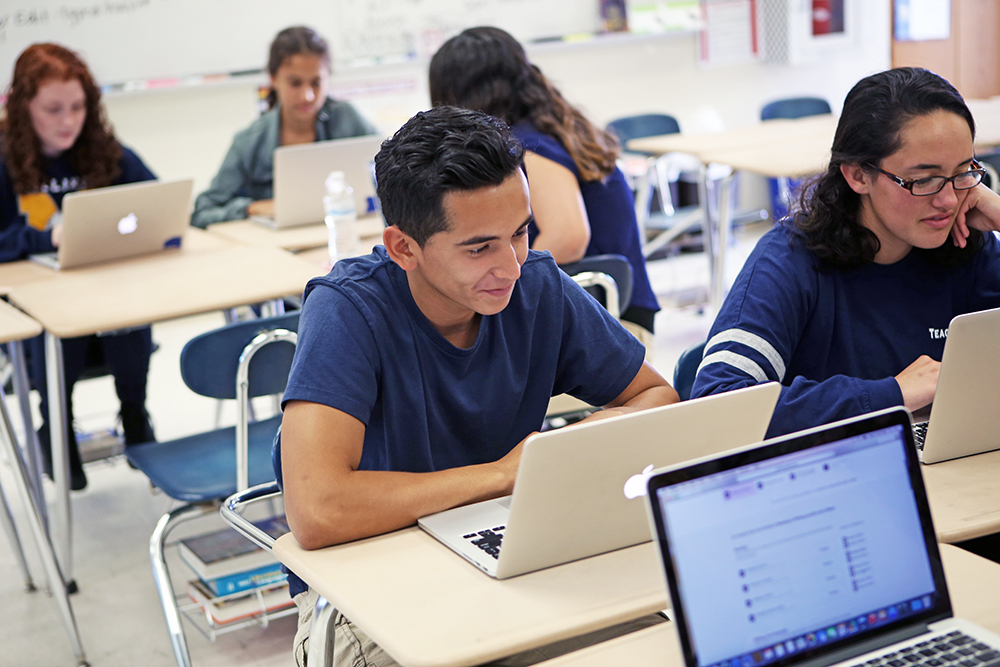 Other district leaders say it will be difficult to replicate what Long Beach did.

As California grapples with how much math students need to qualify for admission to its public universities, leaders of at least one school district say they have it figured out.

Nearly six years ago, Long Beach Unified decided to increase the number of years students have to take math for a high school diploma from two to four years. Since adding the more stringent requirements, the proportion of 12th-graders in the district meeting the minimum California State University admissions requirements went from 38 percent in 2014-15 to 58 percent in 2018-19, according to district data.

The additional math requirement doesn’t alone explain the higher number of students eligible for the 23-campus CSU, because the district in concert with local colleges has placed a big emphasis on increasing college-going rates and has implemented a range of reforms to boost those numbers. But district leaders say the fourth year of high school math has made a difference in providing students with more options to complete college admissions requirements and keep math skills sharp during their senior year.

“When students were not engaged in math reasoning and skill-building for all four years, that was putting them at a deficit when they entered college and enrolled in a math class,” said Pamela Seki, an assistant superintendent in the district.

California only requires two years of math for high school graduation, although every district can choose to impose additional requirements. Currently both CSU and the 10-campus University of California system require three years of math and recommend four as part of the A-G sequence of courses that determine admission eligibility.

Now, CSU is considering requiring four years of math or a quantitative reasoning course such as computer science or statistics for admission. The CSU proposal, which the board of trustees may vote on in November, would go into effect for incoming college freshmen in 2026, to give high schools time to add courses and prepare for the new requirement.

In Long Beach Unified, math is the most frequent barrier to completing courses needed for admission to CSU. Before students were required to take four years of high school math, counselors interviewed by EdSource said some weren’t taking enough math to meet California’s public university admissions requirements, while other graduates struggled in math courses when they got to college.

So the district voted in 2014 to change its math requirements and have phased it in along with new quantitative reasoning courses in Long Beach’s high schools and workshops for teachers. The district also increased the funds it spends on academic interventions like after-school tutoring, Saturday school and supports such as summer bridge programs for students enrolled for the first time in AP courses.

Math courses that wouldn’t help students meet admissions requirements were also eliminated, such as a course called Career Math. “It was low-level, it was going nowhere and this made us get rid of those” courses, said Long Beach Unified Superintendent Christopher Steinhauser, who is also on the CSU board of trustees. “To me, this is a no-brainer.”

Kayla Dubon, a senior at Cabrillo High, has embraced the new math requirement. “Everyone should take math for four years. You never know where life will take you,” she said, referring to how students may not know what careers they will pursue after high school. By taking an extra math course, they can keep their options open.

But officials in other districts say they wouldn’t be able to afford the changes like those in Long Beach Unified and that, if implemented, the CSU math proposal could raise barriers to college for students in their districts.

Sacramento City Unified requires just two years of math to graduate, the state’s minimum. Superintendent Jorge Aguilar said he would like to increase graduation requirements to align with current CSU and UC admissions requirements, but adding courses to do that isn’t feasible right now due to funding and staffing constraints.

Because of these challenges, he is concerned that African-American and Latino students in the district, who are less likely than their white peers to meet A-G requirements, could be further shut out of CSU if it imposes the additional math requirement.

Earlier this year, the Los Angeles Unified school board passed a resolution objecting to the CSU proposal on a number of grounds, citing, among other things, “the real challenges of limited quantitative reasoning courses and teachers in under-resourced high schools.”

“This proposed expansion would only make it more difficult for our students to gain admission,” to CSU, the resolution stated.

CSU has proposed to exempt students at high schools that do not offer enough courses to meet the requirement. But opponents also worry that waivers could add an extra layer of complexity and disproportionately affect low-income and first-generation college students.

Nearly two-thirds of districts already require students to take a third year of math to graduate. But only about 2 percent require students to take a fourth year, according to a survey by the Public Policy Institute of California, a nonpartisan statewide research and policy organization. Elk Grove Unified School District near Sacramento requires four years of math, but only if students complete only two years of science. Students who complete three years of science in the district are required to take three years of math.

Long Beach Unified’s class of 2018 was the first to graduate with three years of required high school math, and students who graduated this past spring were the first required to complete four years.

Taula Murphy, a Long Beach Unified parent, has mixed feelings about the new math graduation requirement. She has a daughter who struggles in math in middle school and she worries that there won’t be adequate support for her daughter to take four years of math.

But Murphy’s other daughter, a senior at Long Beach’s Cabrillo High School, who is taking pre-calculus, doesn’t share the same concerns. “She welcomed the challenge and wanted to stay in the class,” Murphy said.

Since 2014-15, Long Beach Unified has nearly doubled the number of computer science courses it offers, which count towards meeting the district’s math graduation requirement. Nine schools this fall will be offering Introduction to Data Science, an alternative math course that combines math, computer science and data analysis. The course costs the district about $35,000 per year for teacher training and materials.

Steinhauser told EdSource that despite his initial hesitation, the extra math requirement has not been too costly in part because the district also removed some math courses, freeing up teachers for new ones.

Long Beach Unified also had the support of a $7 million grant to be spent over five years from the S.D. Bechtel, Jr. Foundation for work on math instruction in grades K-8, which Seki said allowed the district to spend more professional development funds on high school math.

Erika Medina, head counselor at Jordan High School in Long Beach Unified, supports the extra math requirements in her district and said it has led to more courses and options for students to complete the current A-G requirements. Still, she also has concerns about the CSU proposal. For students who need to repeat a course, she said, summer may not be an option if they are working or have other family responsibilities, making it difficult to be CSU-eligible.

“We know many students struggle with math because of the other challenges they have,” Medina said. To guarantee success under the CSU proposal, she said, “you have to have a student with no hardships, no responsibilities, they don’t have to work during the school year and they have the freedom to take summer school.”

But Long Beach’s Steinhauser believes that what his district has done is doable in others. “People will say Long Beach is special. But Long Beach has 70 percent of students in poverty,” Steinhauser said. “It can be done anywhere.”