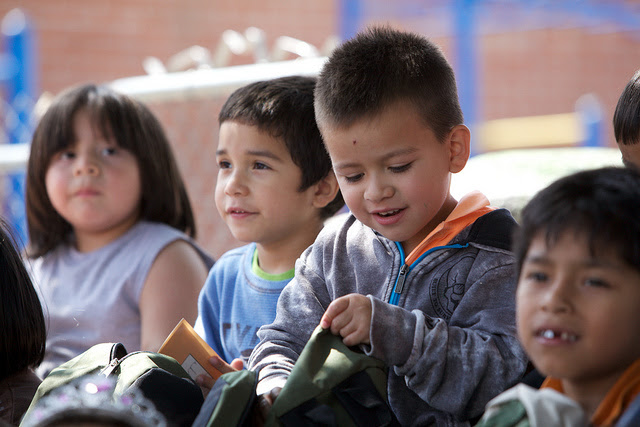 California families with average or low incomes should pay no more than 7 percent of their income on care and education for children under the age of 6.

That’s a long-term goal set by the California Assembly Blue Ribbon Commission on Early Childhood Education, in its draft report for how to improve child care and preschool throughout the state, which was released this week.

Many families in California pay much higher portions of their income for childcare. A single mother with an annual income of $52,076 would pay nearly half of her income on the cost of care for an infant and preschool-age child in a licensed child care center in 2017-18, if she did not have access to subsidized care, according to the California Budget and Policy Center, a nonprofit organization that analyzes how budget policies affect low- and middle-income Californians.

The report also calls for more active outreach to parents who may not know what child care services are available — even suggesting that doctors in prenatal visits make their patients aware of these services before a child is born.

The commission, which is made up of six lawmakers and nine early childhood advocates and researchers, has been holding meetings and hearings throughout the state for the past two years. The panel was chaired by Assemblywoman Blanca Rubio, D-Baldwin Park, and Assemblyman Kevin McCarty, D-Sacramento.

The proposal to try to pay for child care for more families is just one of dozens of recommendations in the report.

“We understand it’s a big and ambitious set of proposals, which is exactly what we wanted,” said Assembly Speaker Anthony Rendon, D-Lakewood, who convened the commission in 2017. “This stuff is meant to be phased in. The way we look at it is to make sure we serve those families who have the greatest need first.”

In terms of access to early childhood programs, the commission suggests the state should first provide subsidies or early childhood program access at no cost to families at or below 100 percent of the Supplemental Poverty Measure — a U.S. Census Bureau measure that takes into account cost of housing, food, utilities and clothing — then gradually increase subsidies to families with higher incomes, up to 100 percent of the State Median Income (about $83,490 for a family of four in 2019), who would pay partial fees on a sliding scale based on income.

Families making less than 70 percent of the State Median Income are currently eligible for subsidized child care in California, but only a fraction of them are actually able to use it, because there isn’t enough space for them.

The commission will hold a public hearing on March 11 at 10 a.m. in the State Capitol to hear public comment on the report. Public comments can also be sent by email to Assembly.BlueRibbonCommission@asm.ca.gov until March 20.

The report was commissioned by Rendon long before Gov. Gavin Newsom proposed massive expansions to services and education for young children in the state budget he introduced in January. Some of the recommendations overlap with proposals made by Newsom, such as expanding access to full-day preschool for all 3- and 4-year-olds, beginning with low-income families, lengthening paid family leave and ensuring that every child receives screening by pediatricians to identify developmental delays early on.

Other recommendations venture into territory not yet addressed by Newsom, or provide suggestions for how some of the goals he has set could be reached.

“This document is a tour de force,” said Kim Pattillo Brownson, vice president of policy and strategy for First 5 LA, one of the county commissions charged with improving outcomes for young children. “It’s pretty darn exciting. It’s two years in the making with some of the brightest leaders in our field across the state, and I think there are a lot of really exciting points of convergence that are already sort of percolating in this document, between what the Blue Ribbon Commission, the Legislature, what the governor, and what the state superintendent of public instruction are lifting up.”

The commission’s report includes recommendations for expanding access to early education, training and compensating the child care workforce, improving quality, retrofitting or building more preschool and child care classrooms, and how to finance it all.

A few of the recommendations:

Advocates celebrated the inclusion of parent and provider perspectives in the process.

“Because parents and providers were part of the commission and there were processes to really be inclusive of their voices, it really makes this process stand out,” said Mary Ignatius, a statewide organizer for Parent Voices, a parent-led organization that advocates for more subsidized childcare, who also served on the commission. “If we’re going to be serious about long-term systems change, we really need to have those directly impacted be part of the process.”

The commission held four focus groups in the San Fernando Valley, Inglewood, Fresno and the San Francisco Bay Area with parents who were current or former recipients of subsidized child care.

Parents’ recommendations, which can be found within the report and on the Parent Voices website, include advertising child care resources in multiple languages and in easily accessible places like hospitals, buses, doctor’s offices and on television; training prenatal doctors to inform parents about child care; allowing parents to sign up for a child care subsidy when pregnant; making it easier for parents to access child care subsidies and keep them, even when they move from one county to another; and providing 12 months of uninterrupted subsidized care for families who receive CalWorks, a public assistance program that provides cash aid and services to low-income families with children.

Rendon, who has personal experience working for years in early education before running for office, says investing in early childhood education is crucial for the state’s future.

“I ran for office because I knew that we were providing good services in the early childhood education field and they were not only being undervalued, but cut by the state government,” said Rendon. “For me, this report is important from that lens. From the perspective of the state, I think this is the only way that you’re able to get at alleviating poverty.”

The final report of the Blue Ribbon Commission is expected to be released in April.