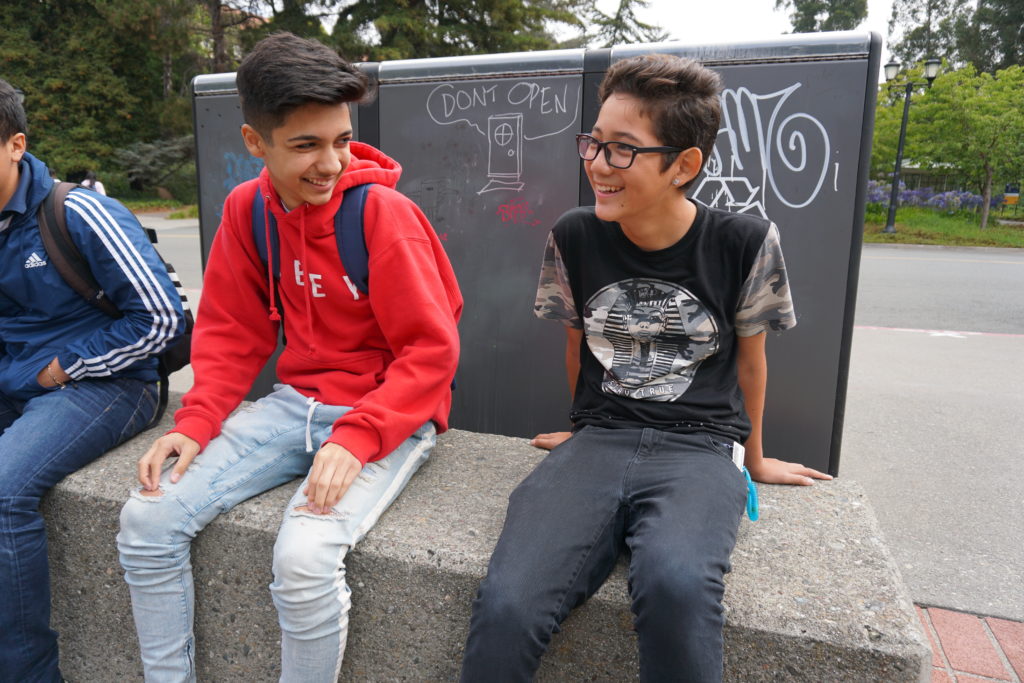 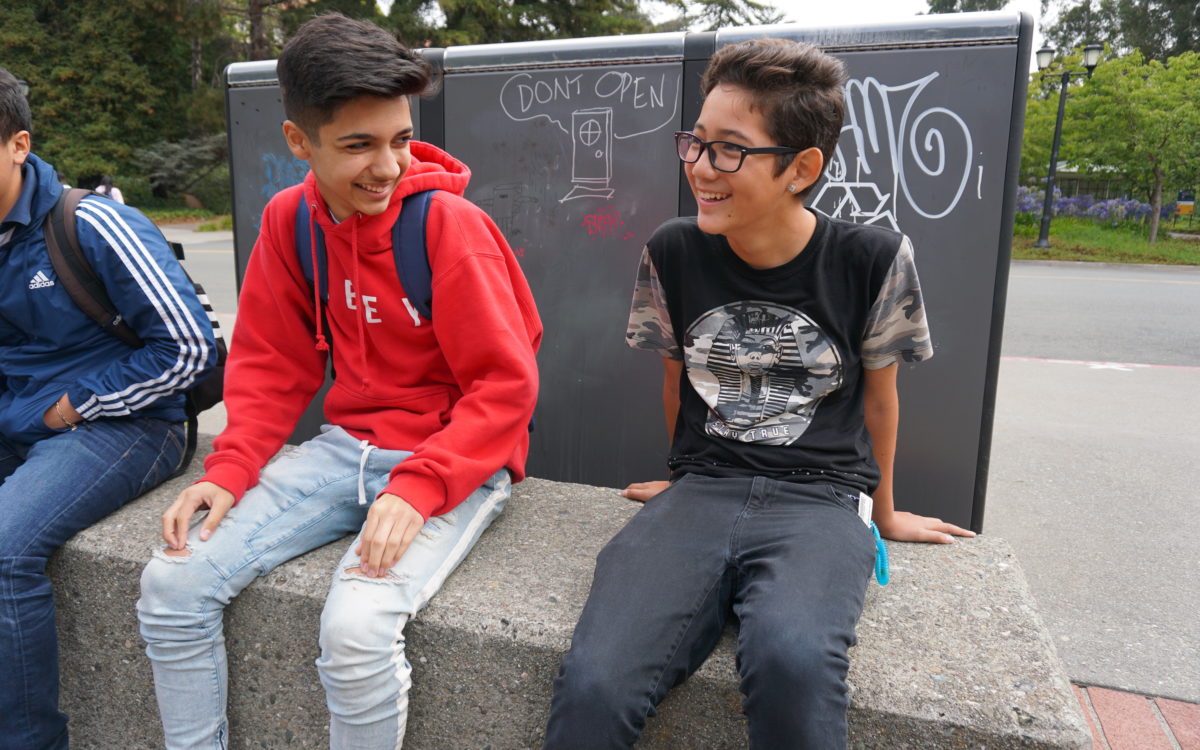 Photo: Sydney Johnson
Freshmen Christian Hipps (left) and Kenji Jimenz (right) wait for the next stop on a campus tour.

Photo: Sydney Johnson
Freshmen Christian Hipps (left) and Kenji Jimenz (right) wait for the next stop on a campus tour.

As thousands of incoming high school freshmen fret about the start of a new chapter, some California schools are relying on summer bridge programs to help students adjust to the new academic environment.

Researchers have found that freshman year can be one of the most critical in a student’s academic journey.

“Students tend to struggle during that transition from 8th to 9th grade,” said Alex Seeskin, chief strategy officer at the University of Chicago Urban Education Institute, which has led research on the transition from middle to high school. “We see large drops in GPA. We see drops in attendance. It’s this period of time between 8th and 9th where we see a lot of movement in metrics that are otherwise pretty steady.”

Starting 9th grade prepared is crucial, researchers say. A 2018 study on Chicago Public Schools from the University of Chicago Consortium on School Research, one of the most comprehensive studies in the country on the topic, found that course failure in 9th grade “is an especially powerful indicator of whether students will graduate.” The study found students who earned seven credits in 9th grade were twice as likely (89 percent) to graduate high school in four years as students who earned five credits (44 percent).

Summer bridge programs are one-to-six-week programs that connect students with campus leaders, help them navigate a new and often larger campus and help them acclimate to academic and social expectations as a high school student.

In California, CORE districts are eight districts that serve a million students and work on strategies to narrow achievement gaps. Within the CORE Districts, 14 high schools called the Breakthrough Success Community are focused on getting more 9th-graders on track for college enrollment, persistence and success. The Breakthrough Success Community works to bring districts together to learn best practices on a topic, such as summer bridge, try similar changes in their districts and share progress data and results.

To measure program effectiveness, schools in the CORE districts that are implementing bridge programs gather data on students who participate to follow their trajectory in high school, said Michelle Steagall, chief academic officer for the CORE districts.

As part of the Breakthrough Success Community program, seven high schools, including Century High School in Santa Ana, have launched summer bridge programs. In the week-long program, Century High students meet for three-and-a-half hours each day, receive free breakfast and lunch and participate in activities to introduce them to their new campus. During one session, older students take freshmen on a tour of the buildings and in another, students go on a scavenger hunt around campus.

Students also meet with counselors to discuss schedule planning. And throughout the program, they hear from teachers about grading, extracurricular activities and clubs, college admission requirements and new social pressures.

“Students need to know who they can talk to,” said Jonathan Swanson, principal of Century High School, who added that grades often dip between 8th and 9th grade at his school.

“If we can address these social emotional pieces, that would be a big step in the right direction to start off their freshman year successfully and not behind the eight ball.”

The Chicago Public Schools study showed that from 2011-12 to 2016-17, average GPAs in all subject areas dropped between 8th and 9th grade for each cohort year. That was true even for some students with high test scores and grades in middle school.

Seeskin, an author of the study, said the decline in academic performance during this period is often driven by non-academic factors, such as being less familiar with the campus layout or administration, or being the youngest students on campus.

“I was afraid I would get lost” at high school, said Christian Hipps, a freshman at Ukiah High School in Mendocino County. This summer, he joined about a third of the incoming freshman class who arrived on campus three weeks early for Summer Academy, a nine-day introduction to high school life.

“It’s a new school, new people and the campus is way bigger, too,” said freshman Parker Dew. She’s also concerned about tougher classes, math in particular. “I did OK in math in middle school, but I’m worried it’s going to be harder,” Dew said.

Students in the program tour their new high school campus and get a taste of elective courses by taking classes ranging from automotive technology to art. Similar to Century High School, they also meet with counselors to learn about graduation and college admission requirements.

Matt LaFever, an English teacher at Ukiah High School and program coordinator for Summer Academy, has seen firsthand how the move to high school can be hard on some students. “Middle school has smaller class sizes and more intimate relationships between a teacher and student,” he said. “That 8th-9th grade transition can lead to a sense of anxiety.”

All students are welcome to apply to the program, which is free, and LaFever said students are rarely turned away.

Two major components of the program are to put students in touch with adults on campus before their first day and get them thinking about college early. Students meet with counselors, upperclassmen, teachers and administrators, and two days of the program are spent on university campuses.

During this year’s visit to UC Berkeley, Ukiah freshmen toured campus libraries and went to the top of the Campanile, a clock tower that overlooks the San Francisco Bay Area. One program leader stood on Sproul Plaza reciting an excerpt from activist Mario Savio’s famous speech during the Berkeley Free Speech Movement.

“Even the brief exposure to high school and college can be helpful to a student and awareness of what they are about to tackle can be very empowering,” LaFever said. “It’s like creating an itinerary for where you are able to travel instead of just hitting the road.”

Hipps said getting to see the school grounds early helped ease his concerns about walking into the wrong classroom. And he said he’s made new friends through the summer program.

For Dew, the best part of Summer Academy was learning about classes she didn’t have access to before.

“I didn’t have drama in middle school, and I’ve always wanted to try it,” she said.

At Century High School, parents are invited to come on the first day of the bridge program and ask questions. They discuss topics, such as the school’s digital student management system (where they can access grades) and admission requirements for the 23-campus California State University and the 10-campus University of California systems.

The summer programs the CORE schools are developing for incoming freshmen largely address the social and emotional side of transitioning to high school, such as study skills and stress management, rather than exposing students directly to coursework.

“A key component to make sure 9th-graders start strong is starting with the transition,” Steagall said. “If we wait to start until they are on campus, we have missed opportunities to develop that sense of belonging.”

“Realistically, we can’t make much progress to move their math or language ability in one week,” said Swanson said. “But hopefully seeing their teachers and peers in a less academic setting will help make connections that will be the base for their academic success when they come in as freshmen.”