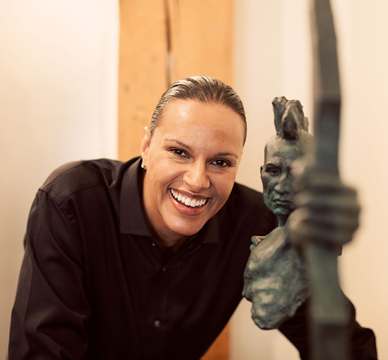 Board approved four-year contract with $385,000 salary plus perks; 9 voted in favor, one abstained.

The college was the brainchild of former Gov. Jerry Brown, who pushed it through the Legislature last year to become the state’s 115th community college with $240 million in state start-up funding over seven years.

Hiles will be taking over the leadership of a college that holds great promise amid skepticism and scrutiny. Community college faculty were intensely opposed. Key lawmakers questioned the college’s need. But in Brown’s last year as governor, the college and its funding were ultimately approved.

She is expected to start in the new position on Feb. 19. Her appointment was approved Wednesday by the college’s Board of Trustees. Her contract was approved in a public vote of 9 in favor and one abstention by Trustee Man Phan, a business professor at Cosumnes River College in Sacramento. Phan, who is a member of the community college system’s board of governors is also a trustee of the board that oversees the online community college.

Phan said the compensasion package was “relatively excessive” especially when compared to what other college presidents and faculty are paid.

As the faculty member on the board, Phan said he wanted to draw attention to the need for “equity” in pay between faculty and administration.

Hiles was given a four-year contract with a base salary of $385,000 plus ongoing cost of living adjustments in years two, three and four.  She will receive yearly bonuses based on performance up to $10,000 in the first year that can then escalate to as much as $40,000 in the fourth year. There is also a $10,000 annual vehicle allowance and one-to-one matching of her contributions to a retirement account. In addition, she will be a member of the state’s retirement system known as CalPERS.

In response, Hiles said she agrees that faculty are generally underpaid but didn’t think that “disadvantaging me or other people relative to market forces, that that solves the problem.”

Alexander Walker-Griffin, a student at Contra Costa College who is also a trustee of the online college, voted in favor of the package for Hiles. “She reflects California in many ways, and also what we need to see more of in this country being a woman leader in something that is a predominantly male sector,” he told EdSource.

The college is scheduled to begin enrolling students in the final quarter of 2019 and is under an aggressive timeline to make good on its promises to fulfill an ambitious goal of educating a portion of the state’s millions of “stranded workers” — individuals 25 and older who finished high school but lack a college degree or certificate. The aim is to give students specific workplace training so they can acquire well-paying jobs. Unlike the structure of traditional community colleges, the online college will offer education programs that can be completed in about a year and are designed to address specific labor shortages. The college seeks to distinguish itself by using a model of education that awards students credit for skills they’ve developed in the workforce, known as competency-based learning.

Hiles, 50, has extensive experience in various facets of education, from K-12 oversight to technology and philanthropy. This is her first college president position. She was one of 10 candidates interviewed in January by the executive committee overseeing the new college.

She was deputy director on the postsecondary success team at the Bill & Melinda Gates Foundation from 2015 to 2017. Hiles founded several technology companies, including Pathbrite, a tool that allows users to track and publish their educational projects and goals online and is used by 900 schools and colleges. According to the website EdSurge, Hiles raised $12 million for Pathbrite before selling it to education and technology powerhouse Cengage Learning in 2015. Hiles was also appointed to the San Francisco Unified Board of Education, by then-mayor and current governor Gavin Newsom. She served as communications director and wrote policy papers during Newsom’s successful campaign for Mayor of San Francisco in 2003.

Most recently she was CEO and managing partner of the financial firm Imminent Equity.

Hiles holds a bachelor’s degree from UC Berkeley in the economics of developing countries and a Master of Business Administration from Yale University, with a concentration in finance and strategic planning. Demonstrating an interest in educational outcomes early on, her thesis was titled “Underdevelopment Theory at Work: How the American Education System Perpetuates the Achievement Gap.” Hiles also sits on the board of Black Girls CODE, a nonprofit based in San Francisco dedicated to bringing technology to girls of color.