Even when districts want more school nurses, they have trouble finding them 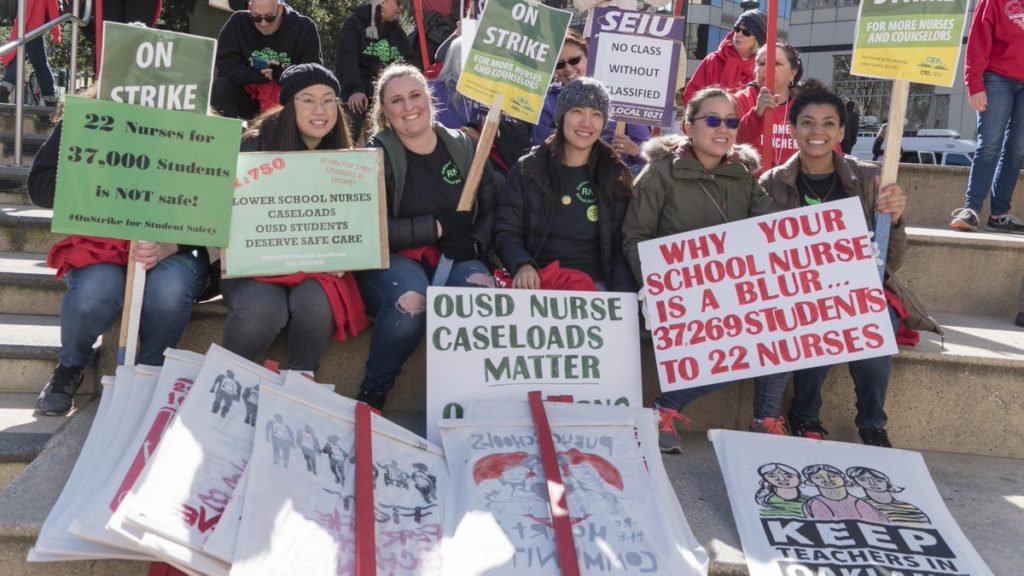 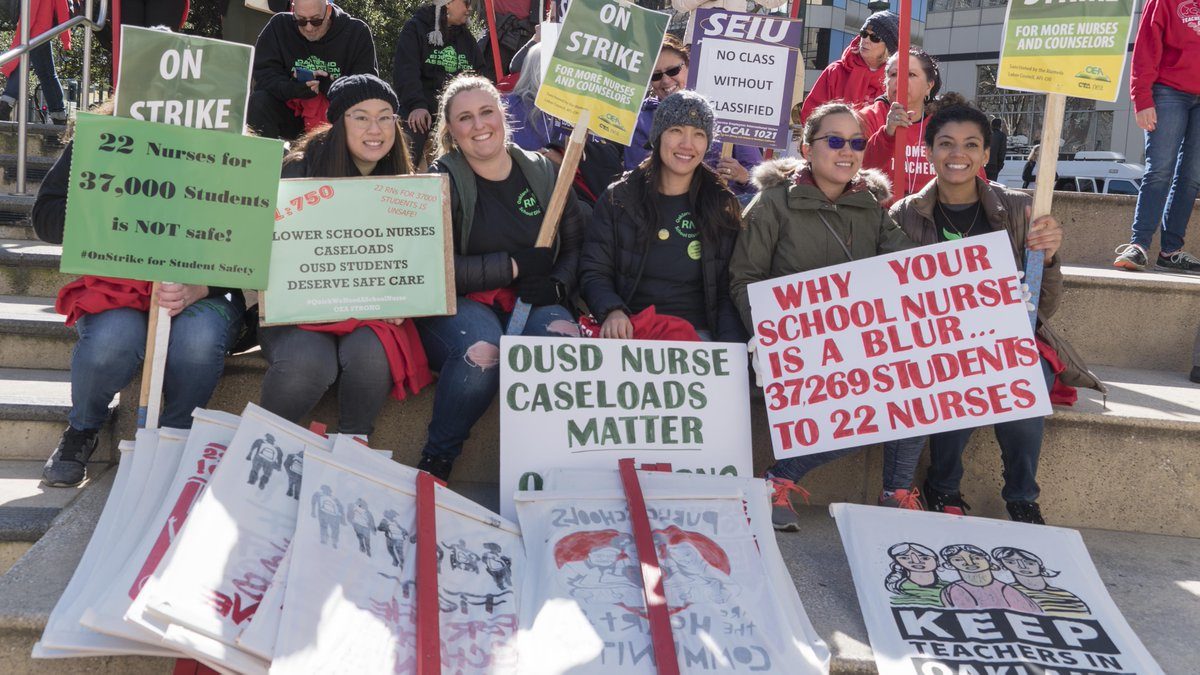 Oakland Education Association
Nurses from the Oakland Unified School District who have joined teachers on the picket lines.

Oakland Education Association
Nurses from the Oakland Unified School District who have joined teachers on the picket lines.

When walking off the job in Los Angeles, and now Oakland, teachers have made demands not only for themselves but also for others who they see as overworked and under-supported in schools. High on the list are school nurses.

Last month’s strike settlement between Los Angeles Unified and its teachers’ union included a commitment by the district to hire 300 new school nurses in addition to filling 40 vacant positions.

And Oakland Unified teachers, who went out on strike last week, are asking the district to hire more nurses and offer new hires and existing nurses bonuses. The district’s most recent contract proposal includes bonuses of up to $5,000 for nurses.

Few argue against the need for more nurses in schools, especially as student health issues become increasingly complex. Rates of chronic conditions like childhood obesity and asthma have gone up considerably in recent decades while the numbers of school nurses have steadily dropped. And studies show that the presence of a school nurse reduces chronic absenteeism and improves student achievement.

But as districts make hiring nurses a greater priority, they are facing a nationwide shortage of registered nurses that is especially acute in California, which makes finding qualified school nurse candidates difficult. The state’s nurse-to-student ratio is 2,500-to-1, according to KidsData.org, which is among the highest in the nation.

The Fall 2016 Survey of Nurse Employers showed that more than 90 percent of California hospitals reported the demand for registered nurses being greater than the available supply. By 2030, the shortage will grow to more than 140,000 registered nurses — making the Golden State worse off than all but Arizona and New Mexico, according to a 2017 study for the American Journal of Medical Quality that examined data from the U.S. Census and Bureau of Labor Statistics.

“Our data gives California a D grade,” said Hugh D. Pforsich, one of the study’s authors and an accounting professor at Sacramento State University. “There is a real-time shortage now and we are forecasting that for every 100,000 people in California there will be a shortage of 304 nurses by 2030.”

Pforsich and others say these projections are particularly sobering for school districts because nurses, on average, earn considerably less working in schools than they do in hospitals and other clinical settings.

Possible solutions include aggressive recruitment efforts by districts that highlight the time off and good benefits school nurses receive, offering more resources for training and support and increasing salary schedules. But it is far from clear whether such efforts will be enough.

In 2017, the average salary for a registered nurse in the Los Angeles metro area was more than $95,000, with senior-level nurses able to earn more than $130,000, according to data from the Bureau of Labor Statistics. Meanwhile, the average salary for a school nurse in L.A. Unified is less than $80,000, according to the district.

“As a professional nurse, you can earn a good living and pick and choose where you want to work,” said Janet Thornton, who serves on the board of the National Association of School Nurses. “You are taking a big pay cut” to become a school nurse. “It’s insulting for many professionals.”

Stephanie Yellin-Mednick has been a school nurse in L.A. Unified for 38 years. She never remembers a time when there was an adequate number of school nurses in the district, but said it’s gotten worse in recent years.

“We are down to under 500 nurses — at one time there were nearly 700 of us,” said Yellin-Mednick, who is also the California director of the National Association of School Nurses. “I’m responsible for four schools…most days I feel like I’m trying to catch a moving train.”

Nurses who joined teachers on the picket lines in Oakland last week told similar stories — talking about what it’s like to work in Oakland Unified, where 22 nurses serve about 37,000 students.

“So I have four different sites…in a day I might make seven different stops,” said Corinne Steigerwald, a district nurse. “There was a time when I recognized a lot of students…there’s probably just a handful I know now. I don’t get to build relationships anymore.”

Like Thornton, Yellin-Mednick acknowledges how hard it can be to convince young registered nurses that school nursing is a good career path. In addition to the relatively low pay, school nurses have to earn a credential in addition to their nursing degree. The credentialing process, which is similar to what teachers have to go through, can take up to two years and cost more than $10,000, she said.

She sees the teacher strike as a watershed event for nurses in L.A. Unified and beyond not just because of the promises it forced the district to make, but also for the way it increased their visibility.

“One thing that came out of the strike is awareness of who we are, what we do and the conditions we are working in,” Yellin-Mednick said. “We work in schools where we no longer have offices — there’ve been nurses who work in closets and in the hallways between bathrooms.”

She added that the terms of the strike settlement put the onus on L.A. Unified officials to make their schools a more attractive place for nurses to work. It calls for the district to hire 190 new nurses by Oct. 1 of this year, and an additional 150 by the 2020-21 school year.

If the district fails to meet these marks, the union can file a grievance and an arbitrator would have the power to force the district to take whatever steps are necessary to attract more applicants, Yellin-Mednick said. This could mean significantly increasing pay scales for nurses and/or paying the cost of their credentials.

Ellen Morgan, an L.A. Unified spokeswoman, confirmed certain facts, such as the average nurse’s pay in the district, the number of nurses employed and the basic outlines of the settlement. But district officials wouldn’t discuss the details of the settlement or their plans for attracting more nurses.

“All details are still being worked out in regards to the hiring of additional school nurses,” Morgan said. “We have no further information at this time.”

Officials in other California districts, although not facing the same pressure as L.A. Unified, acknowledge that they must be strategic in how they recruit nurses. Nowhere is this a bigger reality than in San Jose Unified, which has to find a way to convince nurses to accept lower pay while living in one of the most expensive housing markets in the nation.

That task largely falls on Melinda Landau, who is the manager of San Jose Unified’s health and family support program. Landau said that, among other things, the district agreed to a contractual student-to-nurse ratio of no more than 1,200-to-1, which is about half the statewide average.

Another thing that sets San Jose Unified apart, Landau said, is the resources it puts into training and support for nurses, including mentoring programs for new hires. “It is a challenge to get applicants,” she said. “Our approach is we can’t pay you more, but we can appreciate you and prove that we appreciate you.”

However, the biggest selling point — and this goes for school nurses everywhere — is the schedule. A nurse who works for a school district isn’t pulling the graveyard shift in the local emergency room.

“I was a hospital nurse for a long time,” said Sheri Coburn, president of the California School Nurses Organization. “In this job, you work on the school calendar. And for me, as a young mom, it was better to work the school day than 11 at night until 7 in the morning at the hospital.”

Yet, while an enticing incentive for some, favorable schedules aren’t enough, said Pforsich, the Sacramento State researcher. The problem won’t be solved, he said, until another shortage is addressed — the lack of nursing professors willing to train nurses in the first place.

“There are long lines to get into nursing schools, but there aren’t enough nursing professors to teach all the courses,” Pforsich said. “Who gets a Ph.D. in nursing when you can have a career in nursing and make money? It’s a rare person who drops all of that and goes back to school for five years so they can teach.”