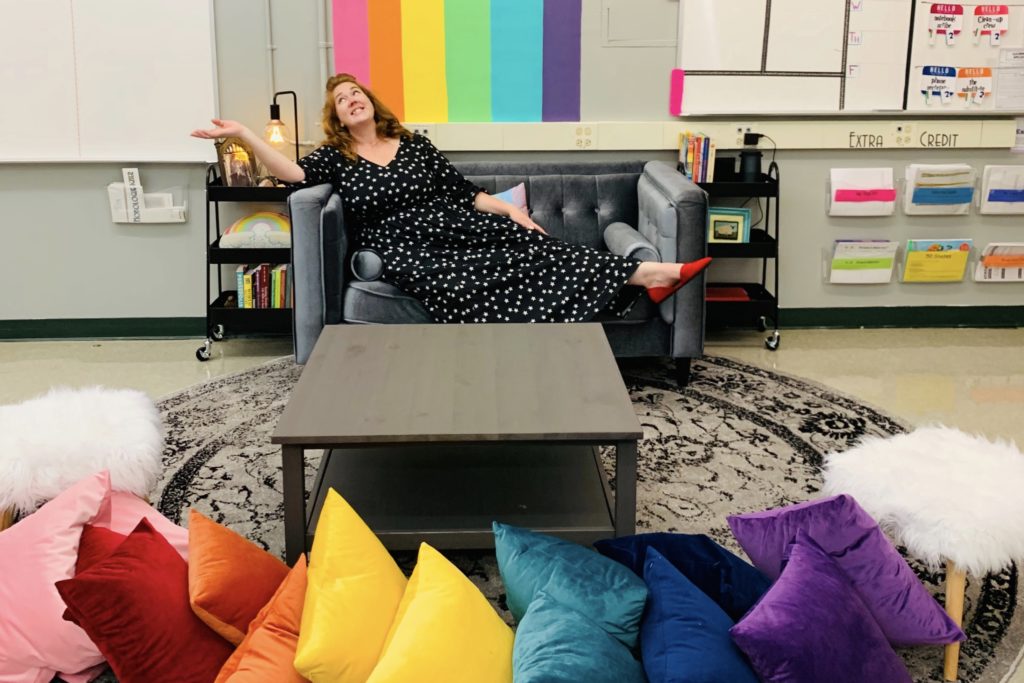 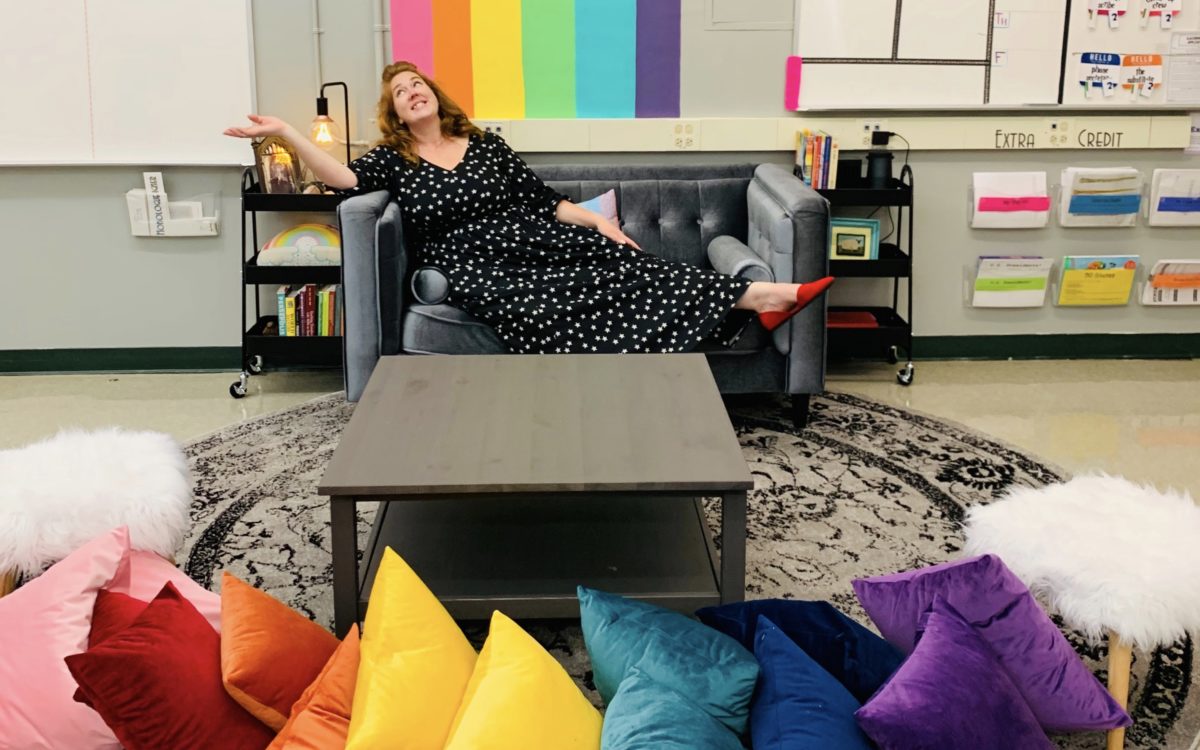 Ashley Wallace is one of nearly 145,000 teachers nationwide whose students will start the school year with new classroom and learning supplies thanks in large part to the generosity of strangers.

The help arrived through a national nonprofit web site, DonorsChoose.org, that connects what teachers need to donors.

Back-to-school is the site’s busiest time of year.

“We were so lucky to get the donations,” Wallace said, after her “extreme classroom makeover,” costing a little under $7,000, was funded through the website, along with two other projects at the United for Success Academy middle school in Oakland Unified. “I honestly never thought they would get funded. It was a dream.”

The organization, which matches donors to teachers and their school wish list, has collected more than $849 million since 2000 to fund projects reaching students in about 82,000 schools. Projects in California got funding starting in 2004 and have totaled over $155 million, said Christopher Pearsall, spokesman for the nonprofit. The site was founded in 2000 by a history teacher in Bronx, New York.

“Teachers start posting projects around late July to mid-August and they stay climbing and peak during October through December before things start to quiet down for the rest of the school year,” Pearsall said. “About 57,000 projects are live on the site right now and I would estimate that will grow to 75,000 to 80,000 by the middle of October.”

For the teachers, asking for help is as simple as filling an online cart with items from businesses. Teachers can also make special requests for items not sold by the listed businesses. DonorsChoose.org reviews the requests and posts them with their total cost, then tracks donations as they come in, including any matches from foundations or companies. Donors can search for specific types of projects or schools to fund. When the project is fully funded, DonorsChoose.org orders the items requested and has them shipped to the teacher’s school.

If projects are not fully funded within four months, donors have the option of redirecting contributions to another teachers’ project or can send a DonorsChoose.org gift card to the teacher to be used toward a future project. About 70 percent of all projects are fully funded within the four-month posting time. Teachers can also repost their projects, with or without changes, after they expire, Pearsall said.

Wallace divided her classroom makeover into three projects so that she would have a greater likelihood of having at least a portion of her dream fulfilled.

Projects are funded by individuals, foundations and businesses that want to help teachers in their schools, neighborhoods, regions or states. About 250 corporations and foundations partner with DonorsChoose and give approximately $52 million annually to support classroom projects around the country by either matching donations for specific projects, funding all projects in a geographic or subject area, or distributing DonorsChoose.org gift cards to others and encouraging them to make donations on their behalf.

In Oakland Unified, the NewSchools Venture Fund, a nonprofit headquartered in Oakland that supports innovative schools, funded all of the Oakland projects, including the classroom makeover requested by Wallace. The national nonprofit organization donated $127,391 to support all 132 projects posted by 94 Oakland teachers. The group also funds organizations that provide training in diversity issues and digital tools for schools.

NewSchools decided to fund the projects in 49 Oakland public schools serving 15,522 students after hearing stories during the recent teachers strike from educators who said they didn’t have money to buy needed supplies for their students. The group funded the requests anonymously in early April, then publicly announced the donation on May 7 to coincide with Teacher Appreciation Week and its annual summit May 8-9 at the Oakland Convention Center.

“Sometimes, groups like ours get painted as anti-teachers and that’s just not so,” said Stacey Childress, NewSchools CEO at the summit. “After brainstorming for a couple of weeks, we decided we would take care of every DonorsChoose.org request hosted by an Oakland teacher.”

She unveiled the donation in a blog post, saying: “We support innovative public schools across the country, but wanted to show a little extra love to teachers in our hometown. That’s why we are excited to announce a special tribute to Oakland teachers!”

Our CEO @NextGenStacey just published a great blog — We’re Celebrating Oakland Teachers During #TeacherAppreciationWeek via @Medium via https://t.co/KPHxHoDoOA. Check it out!

“Some of the stories were just heartbreaking,” said NewSchools spokeswoman Debbie Veney. “As a funder, a lot of the times the grants we give are at the organizational level, not at the human level. We really thought it would be a good thing to give directly to the people who are teachers in Oakland.”

The funding however, did little to soften opposition to NewSchools by the teachers’ union, the Oakland Education Association, which objected to the nonprofit’s funding of charter schools. Some of the teachers joined other community members in picketing outside the venture fund’s meeting May 8.

But NewSchools says it funds innovation in both district and charter schools across the country. It supports two district-run public schools in California: the Oakland SOL dual-language middle school in Oakland Unified and Marin’s Community School, an alternative public high school in San Rafael. It also supports several charter schools in California, including Latitude 37.8 High in Oakland.

“Innovation can happen in lots of different places — not only in the charter sector,” Veney said. “We are interested in great schools, innovation and innovative schools where ever they lie.”

Wallace said she participated in the strike and understands why some union members object to charter schools. But, she said she could not say “no” to funding for her classroom, as well as athletic gear for the after-school program and colorful umbrellas for the garden area. Her students need these items, which the district is not providing, she added.

Wallace learned her project would be funded while checking her email as her students read silently nearby. “Oh, my gosh!” she exclaimed as she read the email.

“The kids looked at me,” she said, adding that two of her students had helped pick out some of the team jerseys and other clothing for the after-school sports program. “We basically stopped reading time,” she said, explaining that the kids gathered around to find out what the school would be receiving. “All of that will be fresh for next year.”

Wallace’s $7,000 dream makeover includes replacing plastic chairs and traditional tables with “flexible seating” such as stand-up tables, couches and comfy areas where her East Oakland students can sit on the floor and work at coffee tables or different settings in the room, such as a library with “nuggets” — which are foldable mats in square and triangular shapes that students can sit or recline on; a “Rainbow Lounge” area with a couch, area rug, stools and rainbow-colored pillows; and black wooden tables and matching metal chairs. It also includes metal rolling carts stacked with colorful folders and clipboards along with markers and crayons replacing cluttered shelves.

Flexible seating projects are one of the most popular on our site, because they allow students to be more comfortable, move more, and address sensory needs. Check out these teachers looking to bring flexible seating to their classrooms: https://t.co/MMDKFfiL0x pic.twitter.com/PWe7yUYpRF

Knowing that her students often come to school from troubled homes or neighborhoods, Wallace said she wanted to create safe, comfortable spots for them to read or just sit in.

Both the outdoor garden area with the new umbrellas and books and her transformed classroom will help provide “a home feel,” she said. “They can be relaxed and they can be themselves without having to worry about any outside forces.”

In other Oakland schools, NewSchools and other donors paid for items including reading rugs, Chromebooks, sports and lab equipment and a washer and dryer in a school that serves a high number of homeless students. Teachers posted “thank yous” on the DonorsChoose.org website explaining how the money would benefit their students.

“Never in my life have I seen so many students beg for nap time,” wrote Emily Rubin, a Transitional Kindergarten teacher at Glenview Elementary, who received 25 nap mats costing a total of $983 for all of her students. She wrote: “Every single student was THRILLED about our napping mats. They all have personal space to rest, read, or draw with a clipboard. We put on our favorite classical music CD, G’Night Wolfgang, and take time to reset our bodies and minds.”

One summer school student told Wallace: “I can see everyone being happy here. I think people are going to love it and want to work in here.”

Leave a Reply to Ms. Wallace