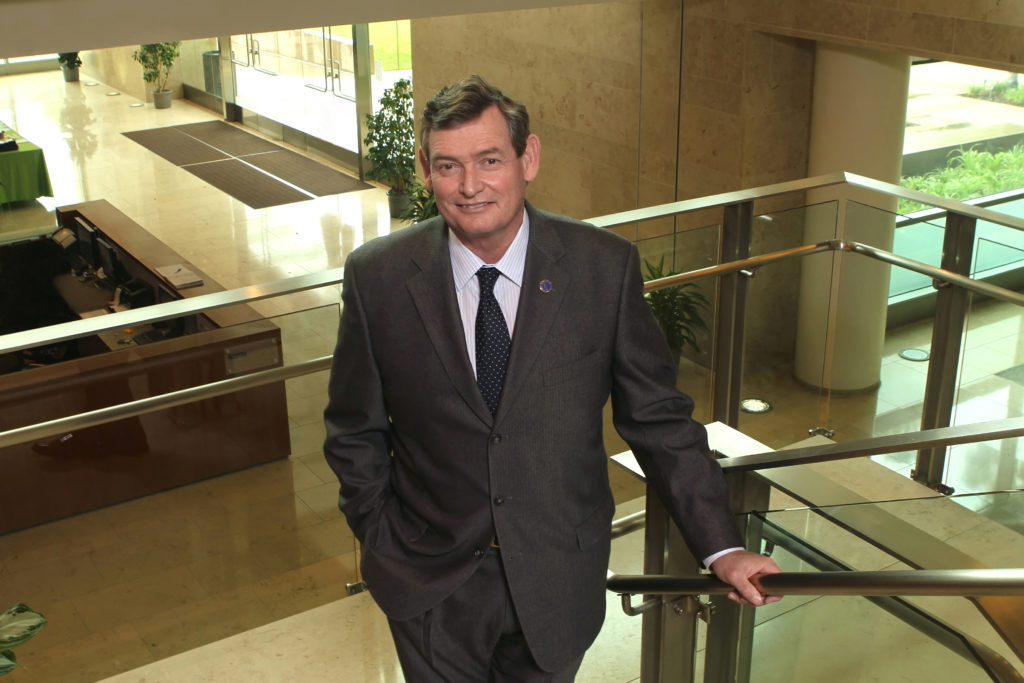 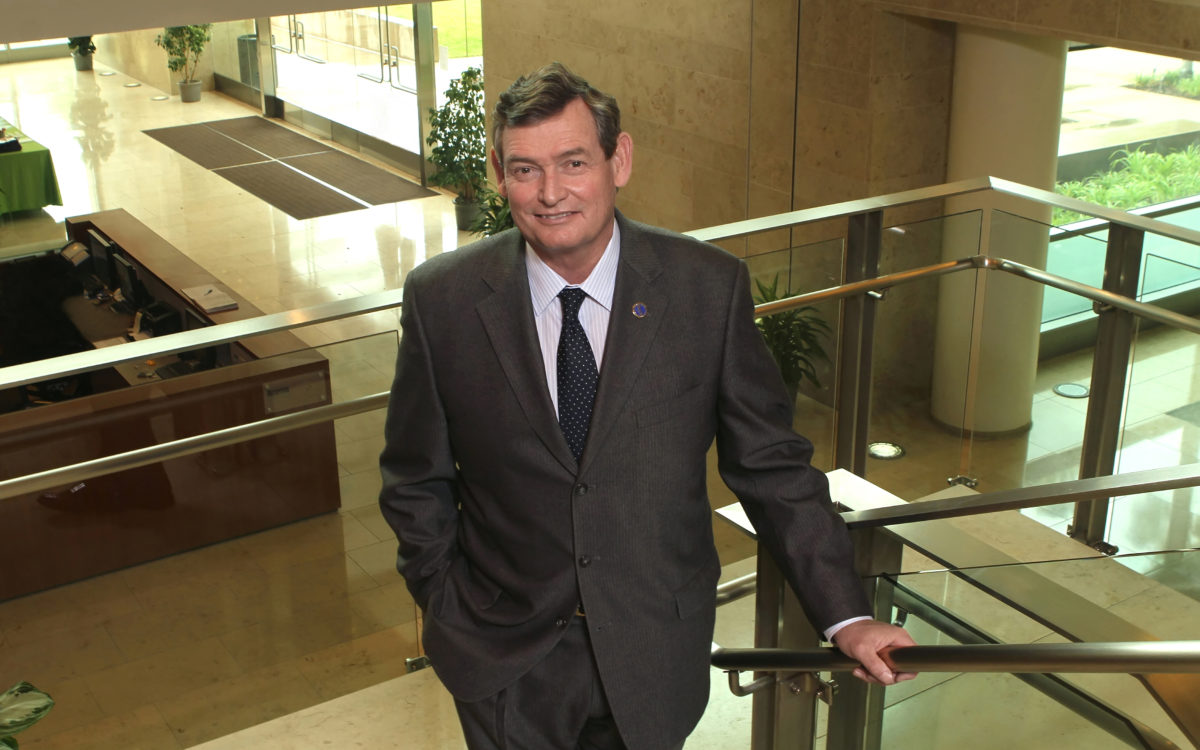 California State University Chancellor Timothy P. White announced Tuesday that he will retire next year following a tenure marked by his efforts to dramatically improve the 23-campus system’s graduation rates and controversial actions to end to non-credit remedial education.

White’s departure means both of California’s four-year public university systems will soon be searching for a new leader. University of California President Janet Napolitano announced last month that she is stepping down at the end of the academic year. White, who became CSU chancellor in 2012, said he wants to leave by June but will stay as late as December 2020 if that helps in the search for a successor to lead what is the largest four-year public university in the nation.

During White’s tenure, the 480,000-student system launched Graduation Initiative 2025, a campaign to significantly increase graduation rates by 2025. As part of that effort, CSU eliminated non-credit remedial courses in English and math across its 23 campuses and is facing much opposition to its proposal to require a fourth year of high school math or related subject as a freshman admissions requirement to help students become better prepared for college work.

White, who turned 70 in July, told EdSource that neither his age nor Napolitano’s retirement impacted his decision to retire. He also said he was not pressured to step down by Gov. Gavin Newsom, saying he has a “fabulous relationship” with the governor. White said his future plans are not set yet but that he might take up a Cal State Long Beach professorship in kinesiology.

White said he decided it would be best to leave on a high note for the massive university system, which stretches from Humboldt in the north to San Diego in the south. With cutbacks triggered by the recession now in the past, the CSU has received substantial state budget increases in recent years — general fund monies growing from $2.3 billion annually to $3.6 billion — and has been adding staff and classes.

“I think it’s actually in CSU’s best interest to have a transition now simply because we are stable, we have great leadership in the vice chancellors and across the 23 campuses and we have a strong and engaged board (of trustees). Funding is as good as it’s been forever, although it’s never enough and we always have needs,” White said in an interview.

“And we have this focus on graduation and we are having a good success. I see a focused, stable and healthy organization. And in my view, it’s better to change this position when that is happening rather than have an organization in disarray and adding disarray by changing the chancellor at that time.”

White gained some popularity through his wry and down to earth public persona, which observers said contrasted with that of his gruffer CSU predecessor Charles B. Reed who held the office for 14 years. White often spoke about his own unusual path: born in Argentina and emigrating as a child first to Canada, then to the United States.

He noted that he was a product of all three of California’s public higher education systems: starting at Diablo Valley Community College in Contra Costa County, then earning a bachelors at CSU’s Fresno State, a master’s at CSU East Bay and a doctorate from UC Berkeley. His expertise is in exercise physiology and he is known for his work in muscle plasticity and aging. He previously was chancellor of UC Riverside and president of the University of Idaho.

White, whose salary is $463,855, said his proudest CSU achievement was launching and making progress on Graduation Initiative 2025.

Under the initiative, which began in 2013, CSU wants to graduate 40 percent of freshmen within four years and 70 percent within six years by 2025. So far, graduation rates have risen under White but still lag far behind some of the system’s goals for 2025. This year, 27.5 percent of students who started as freshmen graduated within four years and 62.1 percent graduated within six. Campuses showed large differences in their 2018 rates, ranging from 9.5 percent at Cal State Los Angeles to 52.5 percent at Cal Poly San Luis Obispo.

White said he is confident that CSU will hit its targets as long as funding for improvement programs continue and “the bottom doesn’t fall out of our finances.” Asked about some of the persistently low four-year graduation rates at some campuses, he said there will always be differences among the 23 “because our students always vary across the campuses.”

CSU has hired more academic counselors, encouraged students to take at least 15 credits each semester and added thousands more courses in an effort to meet the 2025 goals.

Monica Lozano, the president of the College Futures Foundation, an organization that advocates for greater access to higher education, said that simply setting those goals was an important step.

“Once you do that, you set not just your sights on those particular outcomes, but you align the institution — everything from student support to financial aid to curriculum design to transfer agreements,” she said. That alignment toward improved outcomes is, Lozano added, “the power of what he’s trying to do.”

Another notable change was the elimination of remedial courses that offered no course credits. Those courses were replaced with for-credit classes that provide more tutoring and class time.

Some faculty initially protested the elimination of non-remedial courses, which went into effect last fall. Those faculty argued that the changes occurred too abruptly and should have been delayed.

But advocacy groups praised the change. Audrey Dow, senior vice president of the Campaign for College Opportunity, a nonprofit advocacy and policy group, said it’s already clear that cutting non-credit remedial “is going to have tremendous returns in terms of ensuring that the CSU is meeting students where they are and making sure that they can graduate. That was a huge lift.”

In another effort to improve graduation rates, CSU is considering requiring a fourth year of high school math or quantitative reasoning, such as computer science or an extra science lab, for freshman admissions. Supporters of the proposal say it would boost graduation rates because incoming freshmen would be more prepared for mandatory college math courses.

Opponents, which include advocacy groups such as Dow’s, say the proposal would hurt black, Latino and low-income students who may lack access to 12th grade math courses. CSU trustees are expected to vote on the issue next month and a compromise might include more CSU-funded training for high school math teachers and well-defined exemptions for high schools unable to meet the demand for classes.

Another controversial moment in White’s tenure was the accusation in a state audit released earlier this year that the chancellor’s office amassed a $1.5 billion surplus that it did not properly disclose on financial forms.

White called the auditor’s findings misleading and said the funds were mainly in necessary reserve accounts that were repeatedly revealed, according to the Los Angeles Times.

“Those who think we’re doing something on the sly just really are totally, totally inaccurate,” he told the newspaper in June. “There is nothing nefarious here.”

A tense moment in White’s tenure occurred when faculty, coaches, counselors and librarians voted for a five-day strike in 2016. A last-minute contract agreement averted a walk-out that would have shut down all campuses.

CSU trustee Peter Taylor, who is chairman of the board’s education policy committee, said he was somewhat surprised by White’s retirement announcement. “I thought he would ride the wave and relish the accomplishment of the great momentum in the graduation initiative,” Taylor said. “Cultural change is not easy to put in place in higher education and Tim and his team really moved the needle. I expected he would stick around a little more to accept the pats on the back.”

White’s leadership was key to leading the CSU through recessionary times to what are now “very, very positive relations in Sacramento,” added Taylor, who is now President of the ECMC Foundation, which provides funding for efforts to improve higher education outcomes for underserved students, and previously was UC’s chief financial officer White’s style was to have less centralized “command and control” in the chancellor’s office than some past administrations and to allow campuses more flexibility and authority, Taylor said.

Taylor said he was not worried that UC and CSU would compete in their searches to find new leaders. UC’s emphasis on being a research university, with medical schools and federal energy labs, is very different from CSU’s focus on undergraduate education, Taylor said, adding the two simultaneous searches will “appeal to two different types of people.”

CSU student trustee Juan Garcia said he too was surprised by White’s move since he seemed to be so energetic and engaged in the job. “There will be some huge shoes to fill,” said Garcia, who is a fourth-year political science major at Cal Poly Pomona. Students were upset about the 2017 tuition increase — a $270 hike to $5,742 a year for California undergraduates. But overall, he and others students who got to know White, “don’t doubt that his intent was good.”

White’s leadership style included the unexpected. During his time at UC Riverside, White engaged in some undercover drama. He wore a disguise, including false teeth, an earring and eyeglasses, to star in a 2011 episode of the CBS television show “Undercover Boss.” He worked various university jobs, including as a maintenance worker, alongside employees who reportedly did not recognize him and he said he gained insights into how students and employees viewed university policies.