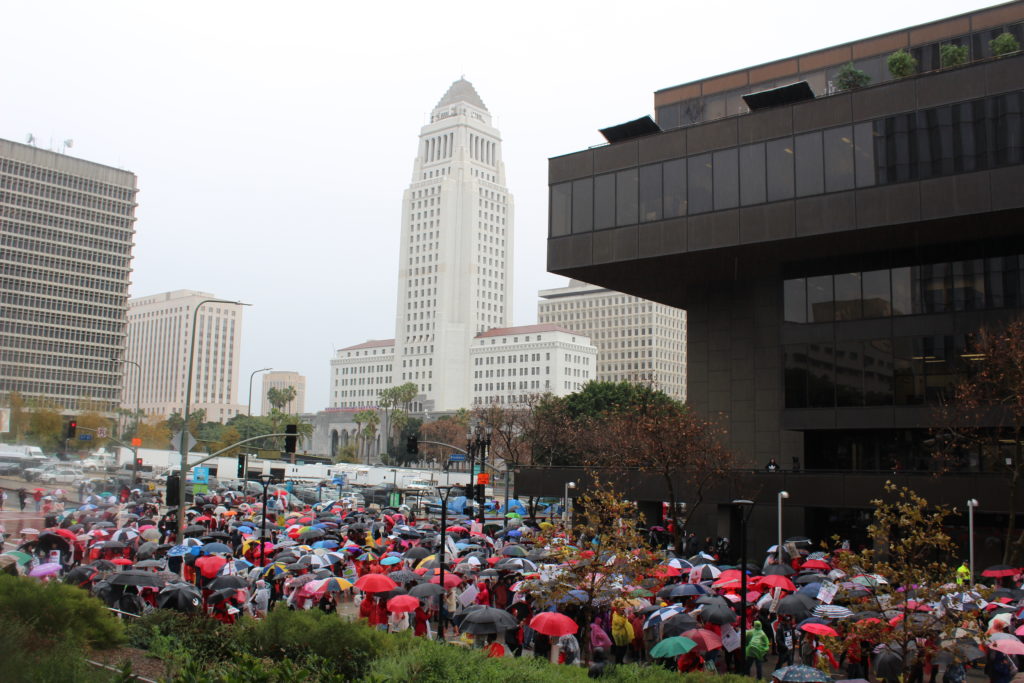 District's budget must preserve a minimum level of reserves 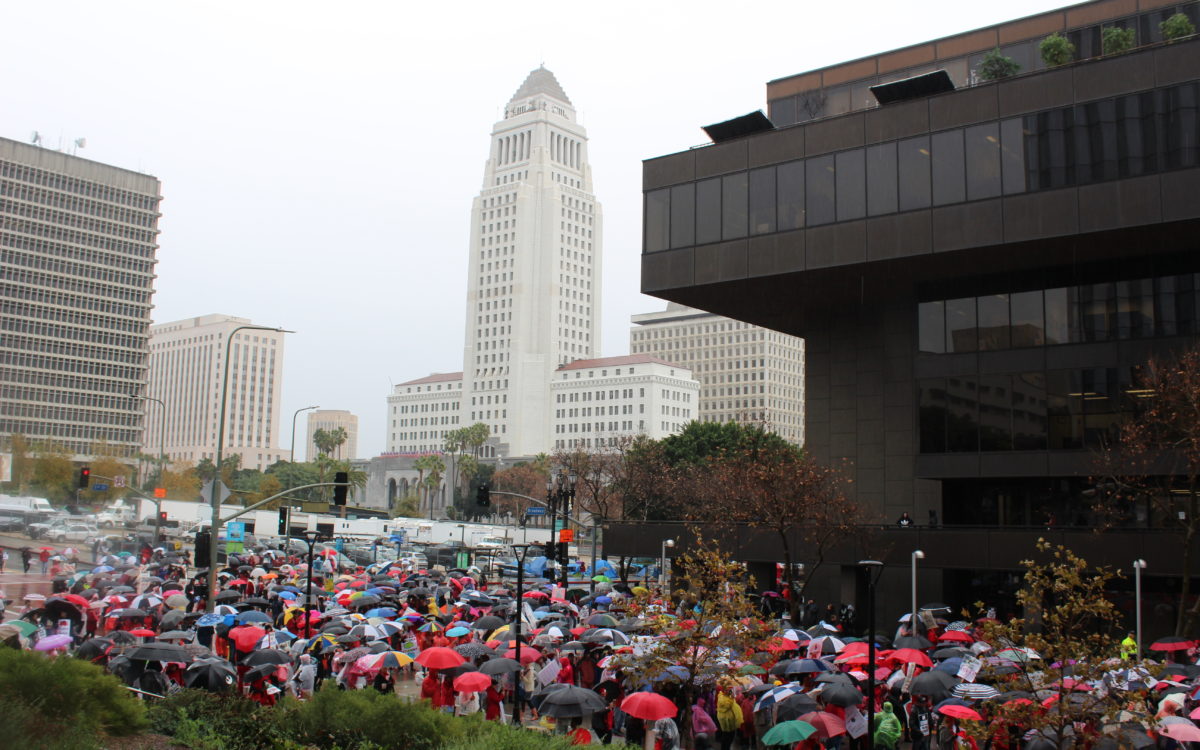 Debra Duardo won’t be in the room during the negotiations between Los Angeles Unified officials and striking teachers that resumed on Thursday. But the district may feel like she’s casting a shadow on the wall.

Duardo, Los Angeles County Superintendent of  Schools, won’t have a say in whatever the final deal looks like. Her role is to make sure the district can pay for it without breaking the bank. The Los Angeles County Office of Education, which she heads,  will study the financial impact of a proposed contract and present an assessment before the Los Angeles Unified board votes on the contract.

“We would not have the authority to stop an agreement, just provide feedback,” Duardo said.

Under state law, county offices of education have the job of monitoring school finances to make sure districts don’t run out of money; if it looks like they might, county offices become involved to varying degrees.

That’s why Duardo sent in a team of experts this week to work with L.A. Unified on a “fiscal stabilization plan” to try to steady its wobbly finances. Leading the county’s team is Jim Morris, the former chief operating officer for L.A. Unified.

“The county has been concerned for a long time about the district’s solvency,” Duardo said.

The 30,000-member United Teachers Los Angeles went on strike Monday for more pay, more counselors, librarians and support staff and smaller class sizes than the district said it could afford, along with demands for curbs on the growth of charter schools. UTLA also disputes how much of a nearly $1.8 billion current surplus the district has to bargain with for next year. The district says 60 percent is already claimed, divided among anticipated salary increases, mandated student equity programs and principals’ discretionary funding. Rising expenses will eat up the remaining 40 percent, it argues.

The county isn’t disputing L.A. Unified Superintendent Austin Beutner’s contention that meeting UTLA’s demands would drive the district into bankruptcy. In a 9-page letter to L.A. Unified Board President Monica Garcia, Duardo wrote that she was concerned about how fast L.A. Unified was burning through the surplus.

“We continue to be alarmed” that the school board “is failing to recognize the long-term impact of the district’s structural deficit spending,” she wrote, and the board hasn’t acted on “time-sensitive financial decisions.”

Duardo was reacting to a mid-December financial update that L.A. Unified and all districts must file with county offices under a 1991 law, commonly referred to by its bill number, AB 1200. The law requires districts to certify that not only the current fiscal year will end in the black but also two years into the future — and include a cushion for financial emergencies. Other districts must include at least a 2 percent financial reserve; because it’s so big, L.A. Unified’s reserve must be 1 percent of its general fund. The county offices intervene if it’s projected to be below that level.

Duardo’s letter noted that the district’s forecast of a 10 percent reserve of $755 million in 2018-19 would drop to $429 million in 2019-20. The following year it would fall to $70.8 million, or 0.96 percent, as the district builds in anticipated expenses. These include pay increases the district has already agreed to with service workers and other district unions and a 6 percent raise over two years it anticipates for teachers in current negotiations. That figure doesn’t include the additional year’s raise UTLA wants.

It also doesn’t include hiring more teachers to lower class sizes, which the district has offered since the report was filed, Duardo said. The district would pay for that in part by cutting a central office bureaucracy so large that the state fined the district $35 million for exceeding administrator-to-teacher ratios set by the state.

Gov. Gavin Newsom brought the district unexpected good news by proposing to pay down part of districts’ increase in contributions to teachers’ pensions — for L.A. Unified that is about $30 million each of the next two years. And the district can expect tens of millions in additional money for special education next year from Newsom’s budget. UTLA says the total increase from the proposed state budget is $140 million more than the district had expected.

This week, Los Angeles County supervisors approved $10 million for the district to hire more mental health counselors — another demand by UTLA. And the strike succeeded in drawing widespread support from the state’s Democratic leaders, the labor movement nationwide and a wide majority of Los Angeles County residents according to a poll by Loyola Marymount University.

But the bad news is very low student attendance during the strike could wipe out much of the added district revenue. After four days, the district estimates it has lost more than $50 million in revenue from student absences, after deducting savings from not paying teachers on the picket line. State law permits reimbursing districts for revenue lost because of emergencies like floods and the wildfire in Paradise. But there’s no provision for money lost when schools are open during a strike.

Like other districts in the county, Los Angeles Unified faces rising staff pension and health care costs, special education expenses and a loss of revenue from declining enrollment. The impact of the latter has been acute in L.A. Unified, where families are fleeing a high cost of living and 20 percent of students are attending independently run charter schools. In its financial forecast, the district is projecting a decline of 5.7 percent — 27,000 students — over three years.

“All districts face the same dilemma,” Duardo said. With L.A. it’s “just adding more zeros to the budget” because of its size, she said.

Although the district’s projected 2020-21 reserve is only a few million dollars shy of the mandated 1 percent, Duardo implied in the letter that even if the district reached that minimum level, the county isn’t confident it would be maintained. It cited among its areas of concern an “inability” to consider the impact of long-term bargaining agreements and “inattention” to unfunded long-term liabilities, the biggest of which is 100 percent coverage of retirees’ health benefits, which very few districts provide.

Duardo would have no authority to reject a labor contract at this stage of intervention. But if a contract would cause higher deficit spending, she said she would expect the district to show in its next financial report in March how it could balance the budget. It could do so through additional budget cuts or new sources of revenue, like bringing a parcel tax to voters, which the school board may now reconsider after dropping the idea last year.

And if the fiscal picture worsened, Duardo could move to the next level of intervention, which is sending in an adviser with the power to veto spending decisions of the school board and administration.

For all but one of the last 11 filing periods, L.A. Unified has certified its finances as “qualified.” That’s a mid-level certification, between a positive certification, which most districts have, and a negative certification, signaling a district may run out of cash and need a state loan to pay its bills. That has happened only a half-dozen times since AB 1200 went into effect, including with Oakland Unified and a district next door to Los Angeles, Inglewood Unified.